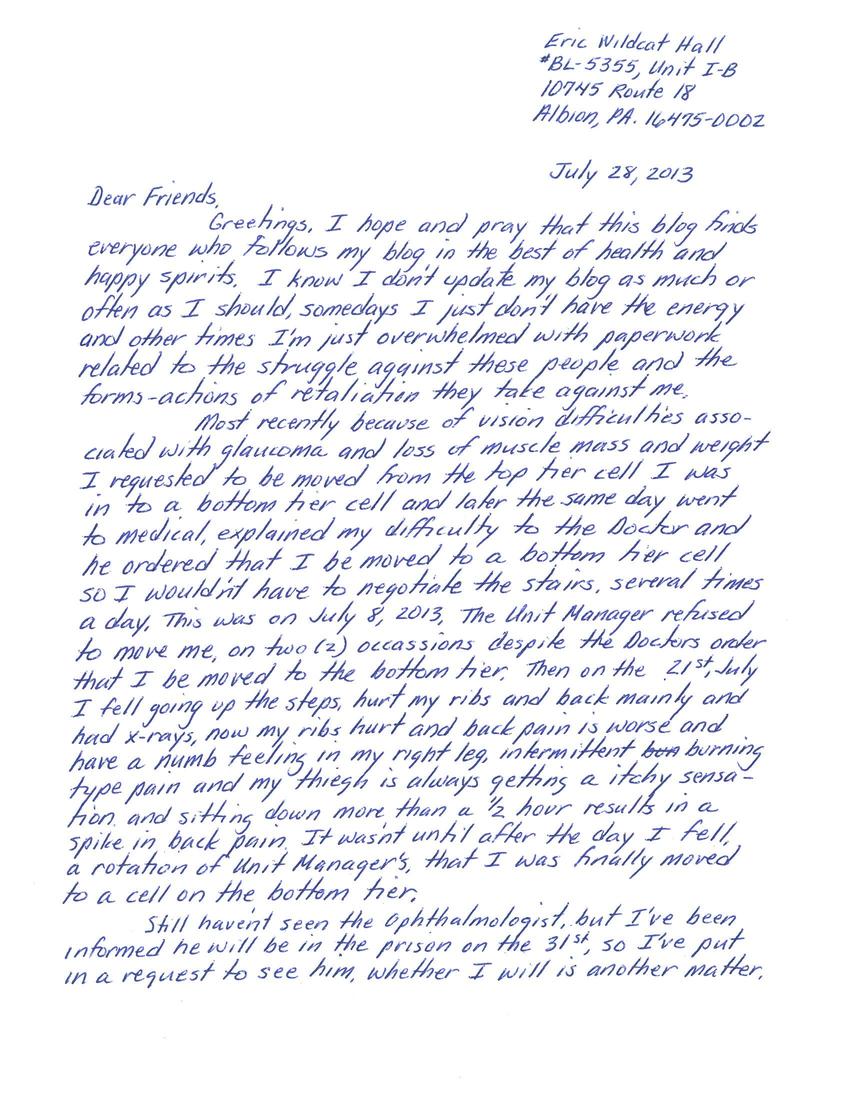 Greetings. I hope and pray that this blog finds everyone who follows my blog in the best of health and happy spirits. I know I don't update my blog as much or often as I should, some days I just don't have the energy and other times I'm just overwhelmed with paperwork related to the struggle against these people and the forms-actions of retaliation they take against me.

Most recently because of vision difficulties associated with glaucoma and loss of muscle mass and weight I requested to be moved from the top tier cell I was in to a bottom tier cell and later the same day went to medical, explained my difficulty to the Doctor and he ordered that I be moved to a bottom tier cell so I wouldn't have to negotiate the stairs, several times a day. This was on July 8, 2013. The Unit Manager refused to move me, on two (2) occasions despite the Doctor's order that I be moved to the bottom tier. Then on the 21st July I fell going up the steps, hurt my ribs and back mainly and had X-rays. Now my ribs hurt and back pain is worse and have a numb feeling in my right leg, intermittent burning type pain and my thigh is always getting a itchy sensation and sitting down more than a 1/2 hour results in a spike in back pain. It wasn't until after the day I fell, a rotation of Unit Managers, that I was finally moved to a cell on the bottom tier.

Still haven't seen the ophthalmologist, but I've been informed he will be in the prison on the 31st, so I've put in a request to see him, whether I will is another matter.

Here in PA prisons we have to pay medical co-pay. $5.00 to see the Doctor and $5.00 for any medication, was charged $10.00 for going to medical after falling on the stairs, so now I'm $-7.59 on my inmate account. Got to see the doctor tomorrow as the rib pain, and leg pain makes sleep even more difficult than before, so I have to get something stronger than ibuprofen to take in the evening so I sleep better.

Been hearing some about what's happening in Egypt, which isn't unexpected. With the oil boom in the Middle East and Africa, lifestyle slowly began to change, and with it a population boom. A population that keeps increasing so much so that now the population has outgrown the oil economy, and differing religious sects and political groups (ideologies) are constantly clashing for control of the oil economy. While the nations that rely on the oil try to ensure that the oil continues to flow. I've also noticed that there hasn't been much prime time news related to Syria. Wonder what that portends. Then again being in prison limits one's access to information.

Haven't got any snail mail from anyone yet, which is disconcerting. I suppose most people out there who happen across the blog, assume others are actually writing, then for others I suppose it's a issue of trust. There is always tomorrow, maybe I'll get some mail.

Everyone take care and be happy.

Blessings
Wildcat
In the spirit of resistance