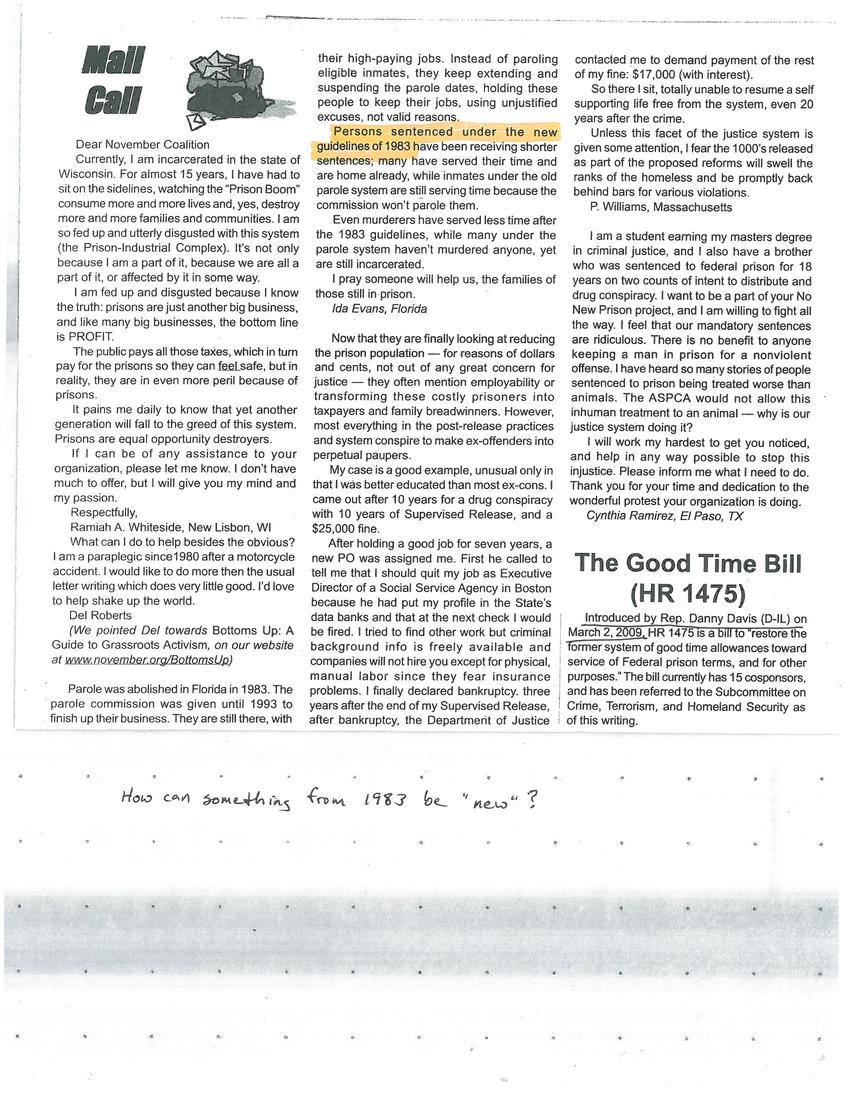 Currently, I am incarcerated in the state of Wisconsin. For almost 15 years, I have had to sit on the sidelines, watching the "Prison Boom" consume more and more lives and, yes, destroy more and more families and communities. I am so fed up and utterly disgusted with this system (the Prison-Industrial Complex). It's not only because I am a part of it, because we are all a part of it, or affected by it in some way.

I am fed up and disgusted because I know the truth: prisons are just another big business, and like many big businesses, the bottom line is PROFIT.

The public pays all those taxes, which in turn pay for the prisons so they can feel safe, but in reality, they are in even more peril because of prisons.

It pains me daily to know that yet another generation will fall to the greed of this system. Prisons are equal opportunity destroyers.

If I can be of any assistance to your organization, please let me know. I don't have much to offer, but I will give you my mind and my passion.

What can I do to help besides the obvious? I am a paraplegic since 1980 after a motorcycle accident. I would like to do more than the usual letter writing which does very little good. I'd love to help shake up the world.

(We pointed Del towards Bottoms Up: A Guide to Grassroots Activism, on our website at www.november.org/BottomsUp.)

Parole was abolished in Florida in 1983. The parole commission was given until 1993 to finish up their business. They are still there, with their high-paying jobs. Instead of paroling eligible inmates, they keep extending and suspending the parole dates, holding these people to keep their jobs, using unjustified excuses, not valid reasons.

Persons sentenced under the new guidelines of 1983 have been receiving shorter sentences; many have served their time and are home already, while inmates under the old parole system are still serving time because the commission won't parole them.

Even murderers have served less time after the 1983 guidelines, while many under the parole system haven't murdered anyone, yet are still incarcerated.

I pray someone will help us, the families of those still in prison.

Now that they are finally looking at reducing the prison population - for reasons of dollars and cents, not out of any great concern for justice - they often mention employability or transforming these costly prisoners into taxpayers and family breadwinners. However, most everything in the post-release practices and system conspire to make ex-offenders into perpetual paupers.

My case is a good example, unusual only in that I was better educated than most ex-cons. I came out after 10 years for a drug conspiracy with 10 years of Supervised Release, and a $25,000 fine.

After holding a good job for seven years, a new PO was assigned me. First he called to tell me that I should quit my job as Executive Director of a Social Service Agency in Boston because he had put my profile in the State's data banks and that at the next check I would be fired. I tried to find other work but criminal background info is freely available and companies will not hire you except for physical, manual labor since they fear insurance problems. I finally declared bankruptcy. Three years after the end of my Supervised Release, after bankruptcy, the Department of Justice contacted me to demand payment of the rest of my fine: $17,000 (with interest).

So there I sit, totally unable to resume a self supporting life free from the system, even 20 years after the crime.

Unless this facet of the justice system is given some attention, I fear the 1000's released as part of the proposed reforms will swell the ranks of the homeless and be promptly back behind bars for various violations.

I am a student earning my masters degree in criminal justice, and I also have a brother who was sentenced to federal prison for 18 years on two counts of intent to distribute and drug conspiracy. I want to be a part of your No New Prison project, and I am willing to fight all the way. I feel that our mandatory sentences are ridiculous. There is no benefit to anyone keeping a man in prison for a nonviolent offense. I have heard so many stories of people sentenced to prison being treated worse than animals. The ASPCA would not allow this inhuman treatment to an animal - why is our justice system doing it?

I will work my hardest to get you noticed, and help in any way possible to stop this injustice. Please inform me what I need to do. Thank you for your time and dedication to the wonderful protest your organization is doing.

Introduced by Rep. Danny Davis (D-IL) on March 2, 2009, HR 1475 is a bill to "restore the former system of good time allowances toward service of Federal prison terms, and for other purposes." The bill currently has 15 cosponsors, and has been referred to the Subcommittee on Crime, Terrorism, and Homeland Security as of this writing.