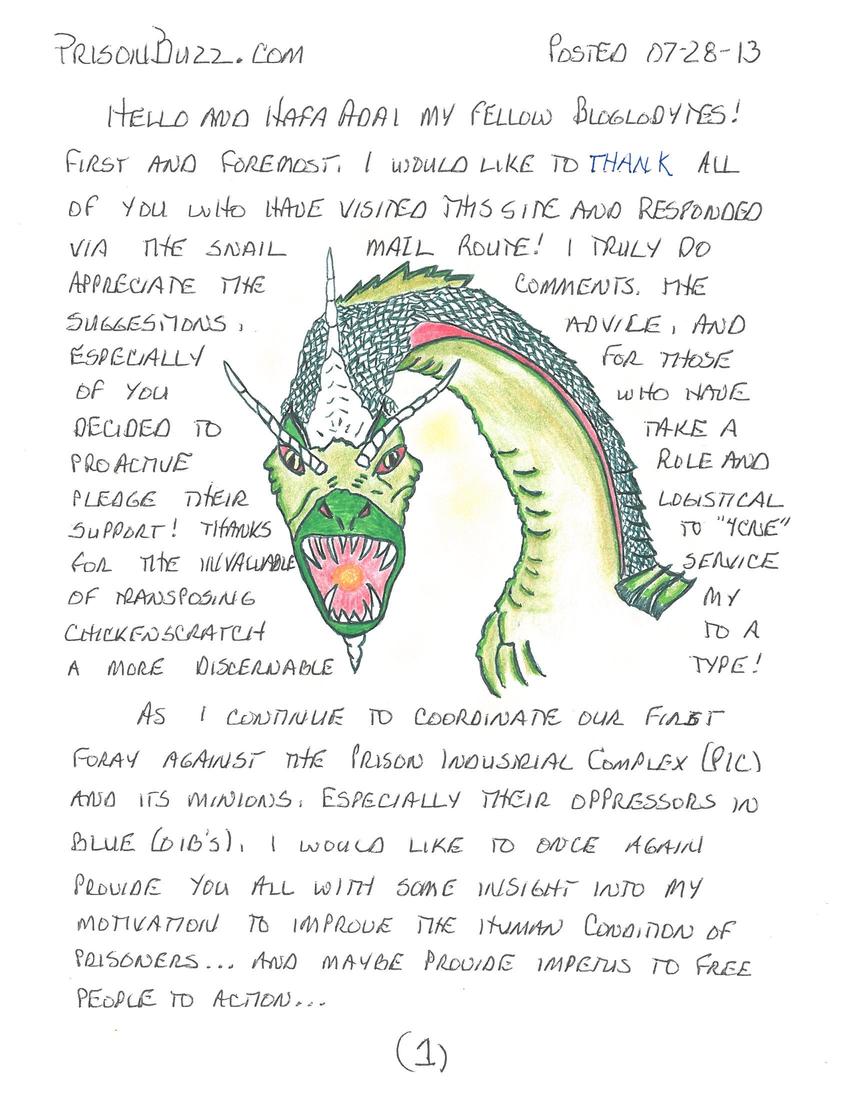 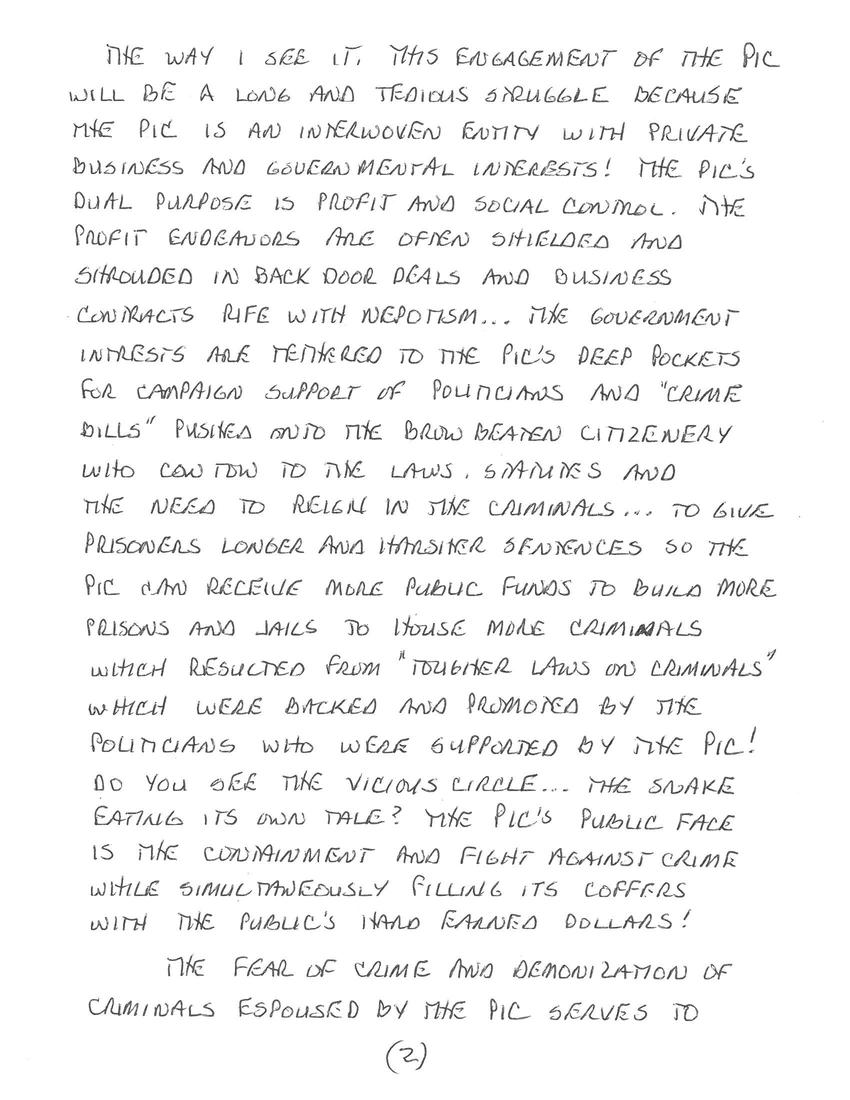 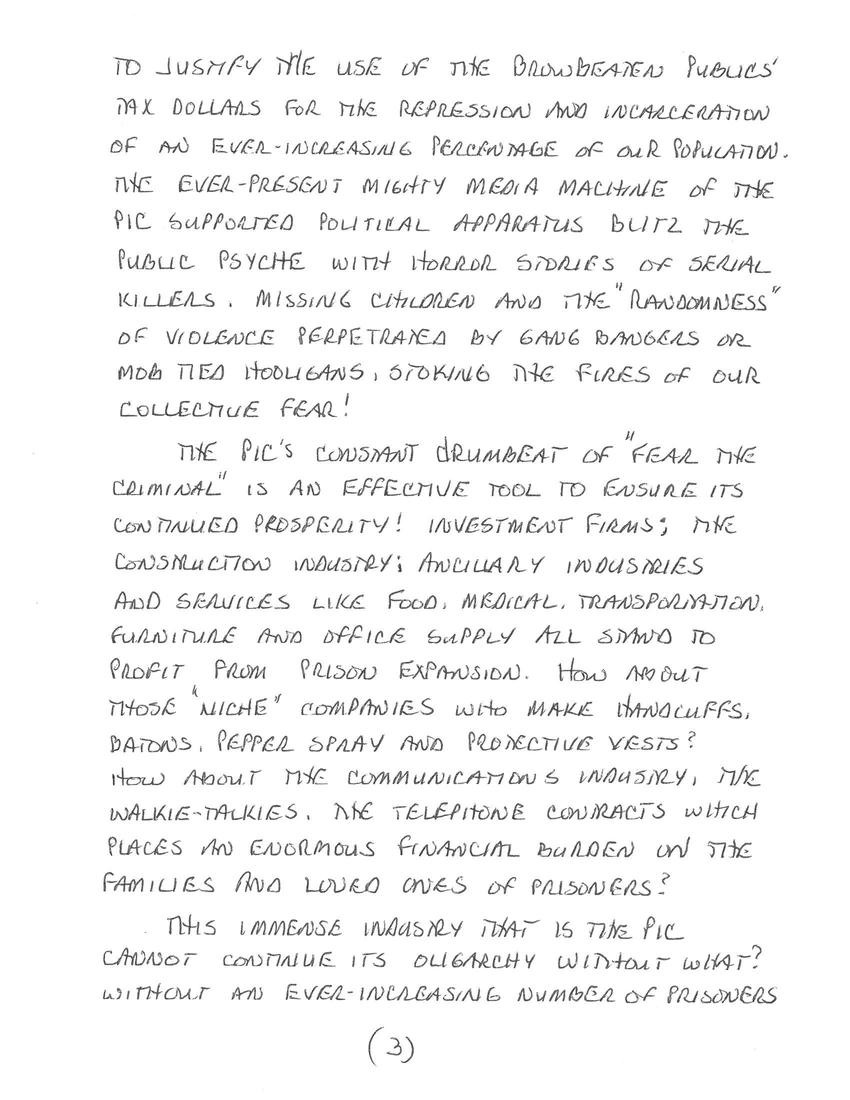 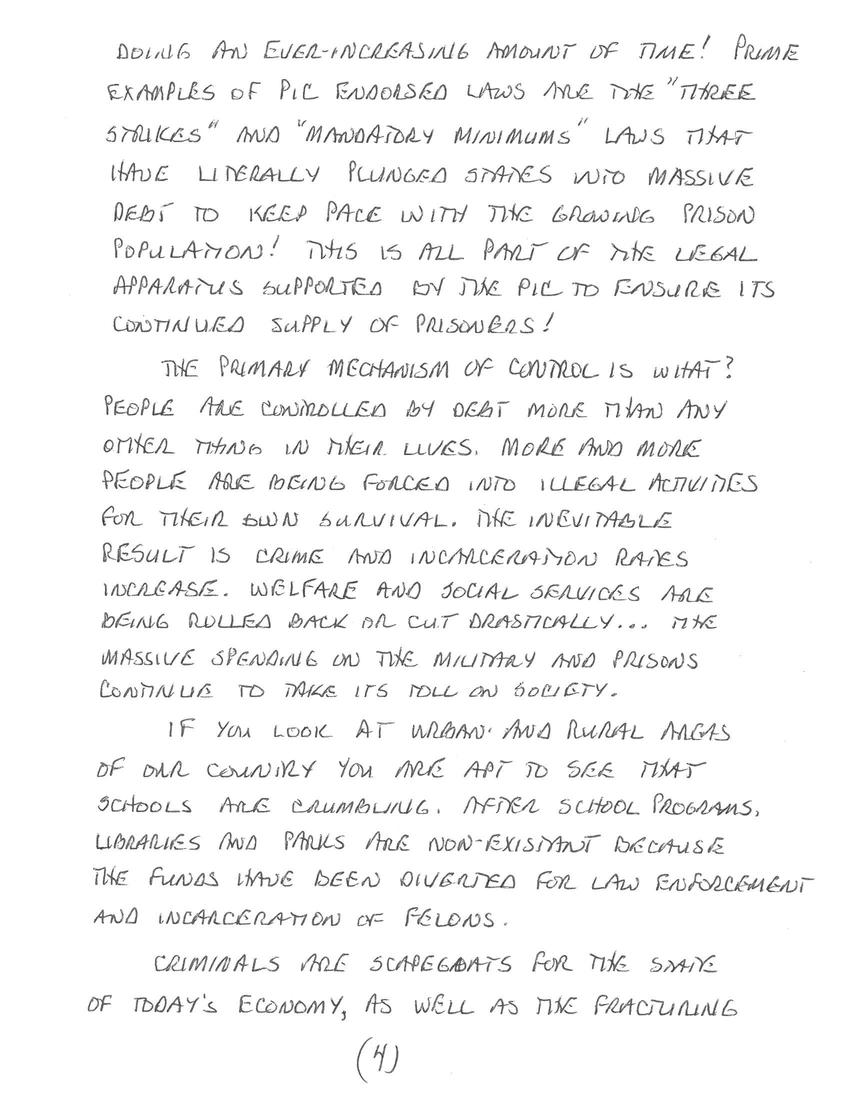 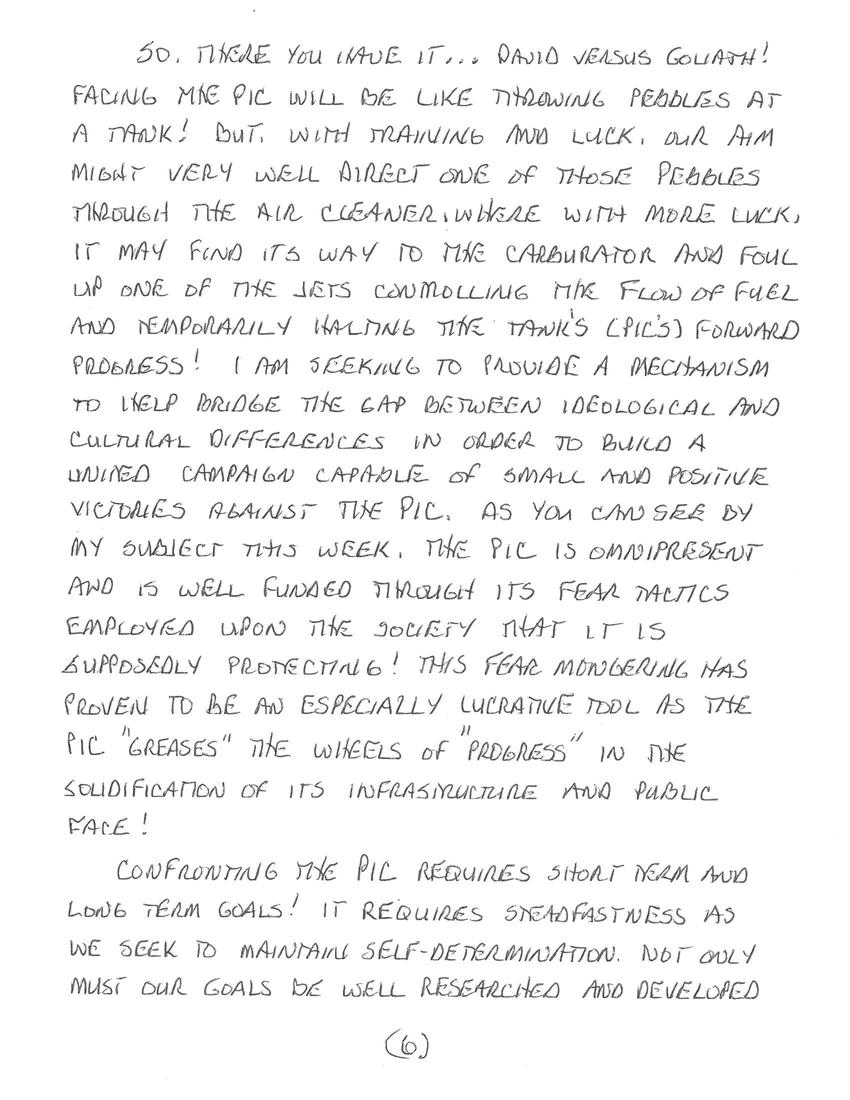 Hello and Hafa Adai my fellow bloglodytes! First and foremost, I would like to thank all of you who have visited this site and responded via the snail mail route! I truly do appreciate the comments, the suggestions, the advice, and especially for those of you who have decided to take a proactive role and pledge their logistical support! Thanks to "4cne" for the invaluable service of transposing my chickenscratch to a more discernible type!

As I continue to coordinate our first foray against the prison industrial complex (PIC) and its minions. Especially their oppressors in blue (OIBs), I would like to once again provide you all with some insight into my motivation to improve the human condition of prisoners... and maybe provide impetus to free people to action...

The way I see it, this engagement of the PIC will be a long and tedious struggle because the PIC is an interwoven entity with private business and governmental interests! The PIC's dual purpose is profit and social control. The profit endeavors are often shielded and shrouded in back door deals and business contracts rife with nepotism... The government interests are tethered to the PIC's deep pockets for campaign support of politicians and "crime bills" pushed onto the browbeaten citizenry who kowtow to the laws, statutes and the need to rein in the criminals... to give prisoners longer and harsher sentences so the PIC can receive more public funds to build more prisons and jails to house more criminals which resulted from "tougher laws on criminals" which were backed and promoted by the politicians who were supported by the PIC! Do you see the vicious circle... the snake eating its own tail? The PIC's public face is the containment and fight against crime while simultaneously filling its coffers with the public's hard earned dollars!

The fear of crime and demonization of criminals espoused by the PIC serves to justify the use of the browbeaten public's tax dollars for the repression and incarceration of an ever-increasing percentage of our population. The ever-present mighty media machine of the PIC supported political apparatus blitz the public psyche with horror stories of serial killers, missing children and the "randomness" of violence perpetrated by gang bangers or mob tied hooligans, stoking the fires of our collective fear!

The PIC's constant drumbeat of "fear the criminal" is an effective tool to ensure its continued prosperity! Investment firms; the construction industry; ancillary industries and services like food, medical, transportation, furniture and office supply all stand to profit from prison expansion. How about those "niche" companies who make handcuffs, batons, pepper spray and protective vests? How about the communications industry, the walkie-talkies, the telephone contracts which places an enormous financial burden on the families and loved ones of prisoners?

This immense industry that is the PIC cannot continue its oligarchy without what? Without an ever-increasing number of prisoners doing an ever-increasing amount of time! Prime examples of PIC endorsed laws are the "three strikes" and "mandatory minimums" laws that have literally plunged states into massive debt to keep pace with the growing prison population! This is all part of the legal apparatus supported by the PIC to ensure its continued supply of prisoners!

The primary mechanism of control is what? People are controlled by debt more than any other thing in their lives. More and more people are being forced into illegal activities for their own survival. The inevitable result is crime and incarceration rates increase. Welfare and social services are being rolled back or cut drastically... The massive spending on the military and prisons continue to take its toll on society.

If you look at urban and rural areas of our country you are apt to see that schools are crumbling. After school programs, libraries and parks are non-existent because the funds have been diverted for law enforcement and incarceration of felons.

Criminals are scapegoats for the state of today's economy, as well as the fracturing of our social structure. Even the term "rehabilitation" in today's penal vocabulary is meaningless... after all, rehabilitate for what? To be released into an economy with no jobs? To reenter a community with no hope for supporting its youth let alone accepting an ex-felon amongst its fold?

Yeah, right! The PIC is becoming central to the growth of the United States economy; which makes prisoners an integral part of the corporate agenda! Because of their social invisibility, powerlessness and isolation, prisoners have a devil of a time thinking and moving in solidarity!

A message to all of you out there in worldwide internet community, opposing the blatant growth of the PIC and supporting rights and basic humanity of prisoners may be your only viable way of stemming the consolidation of a police state which oppresses us all! Through these threads we can see that for better or worse, we are in this together!

So what is it that you choose to do? Remember... pain is inevitable but suffering is a choice...

So there you have it... David versus Goliath! Facing the PIC will be like throwing pebbles at a tank! But, with training and luck, our aim might very well direct one of those pebbles through the air cleaner, where with more luck, it may find its way to the carburetor and foul up one of the jets controlling the flow of fuel and temporarily halting the tank's (PIC's) forward progress! I am seeking to provide a mechanism to help bridge the gap between ideological and cultural differences in order to build a united campaign capable of small and positive victories against the PIC. As you can see by my subject this week, the PIC is omnipresent and is well funded through its fear tactics employed upon the society that it is supposedly protecting! This fear mongering has proven to be an especially lucrative tool as the PIC "greases" the wheels of "progress" in the solidification of its infrastructure and public face!

Confronting the PIC requires short term and long term goals! It requires steadfastness as we seek to maintain self-determination. Not only must our goals be well researched and developed before any campaign is to be initiated, education and effective communication is key! The time for discussing generalities is coming to a close. Soon, a bona fide campaign will commence! With this, and recent discussions, I seek to influence as many people as possible to at least think about my efforts behind this razor wire! My time for networking and glad-handing is nearing its inevitable conclusion... a transition from talk to action is nearing. I am designing and developing strategies to anticipate problems and to solve them in the least amount of time this must be a matter education and practical application of what has been learned, shining a guiding light as we forge ahead!

In order to combat a foe as well equipped and funded as the PIC, our movement must be well structured, developed and organized. We must always seek out those who are more learned and experienced than us; glean information and advice from them; disseminate this material and apply it as it best suits the campaign at hand.

I reach out to all of you who are wavering in their decision to support our campaign. The work you will be hard... sacrifice is always hard... You may be asked to do tedious tasks which may not seem reasonable or necessary, however, please remember that your task is but a part of the larger whole! An integral part to be sure. Even in the case of funding... You may not think the little offering you may want to give to the movement is insignificant, but how can that be? Does not a drop in the proverbial bucket not lend to the eventual filling of said bucket as more drops are added? So please believe me when I say that whatever logistical support you offer is valuable fuel to the machine I am gearing up to face the PIC on its home turf! Even those who just want to wish us well (and even those who tell me to go to hell!) are appreciated and responded to.

Again, I thank all of you who have pledged their support in one form or another! For those who are curious and would like to discuss my intentions in a more detailed manner; or would like to pledge their supporting or funding, please contact me via the snail mail address provided on my profile page! I've got to close now so as to leave envelope space for a couple of my esteemed prisoner brethren to air their thoughts! Hafa adai atungo... hatsa hulo... Cait, thank you and please contact me through snail mail...

Thank you for transcribing my post of Sunday, May 26!

I must say that I don't mean to sound pretentious or disingenuine. I am only trying to alert you folks out there of the oppressive and long-reaching tactics of the prison industrial complex (PIC), its minions and in particular, its oppressors in blue (OIBs). I have decided enough is enough (of course, I know this is suspect by a lot of you all because I am undertaking this cause after twenty-five years of incarceration) so I have undertaken the leadership role to gather, coordinate, educate and develop campaigns confronting the PIC on its home field (so to speak!).

Because I have no access to the internet or this blog other than through my weekly posts (conveyed via snail mail!), I cannot reply to commenters to my blog in a timely manner, which is why I offer visitors to contact me directly for more detailed conversation!

Thank you, hjtn (Cait) for transcribing my post and for your posted comments. Take care and hafa adai atungo... hasta huld.