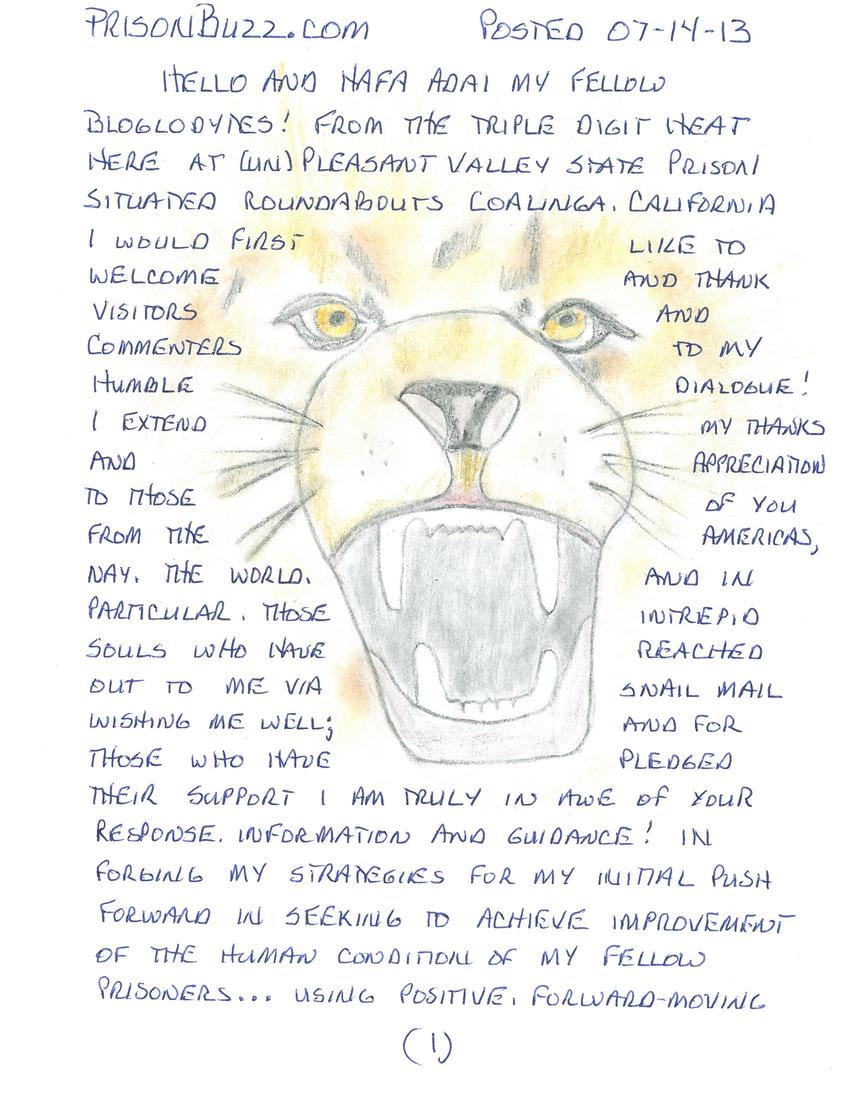 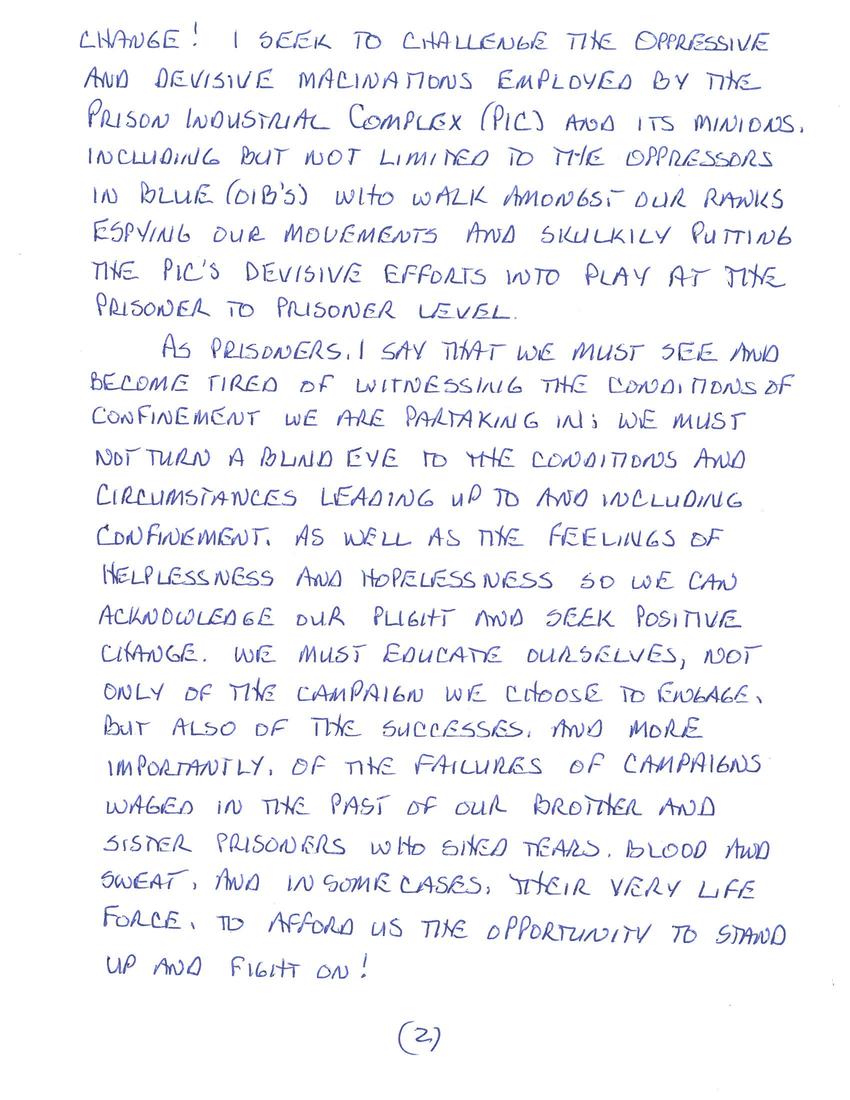 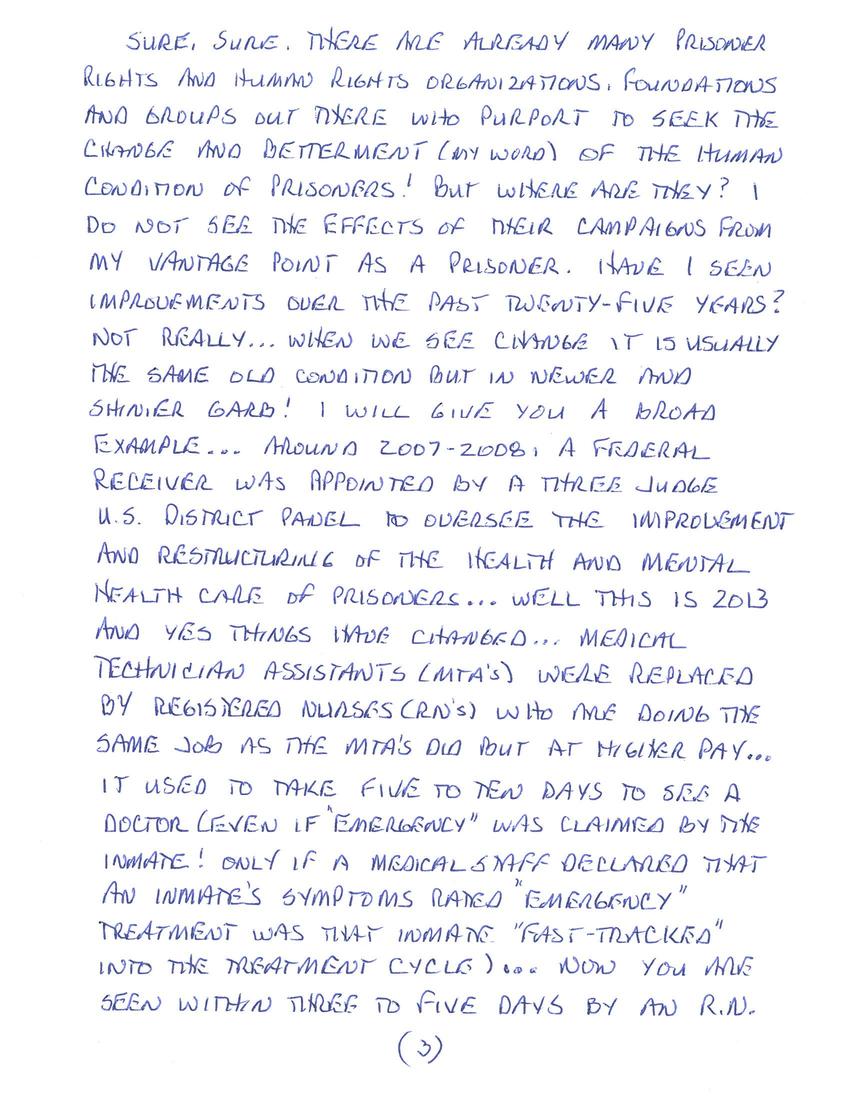 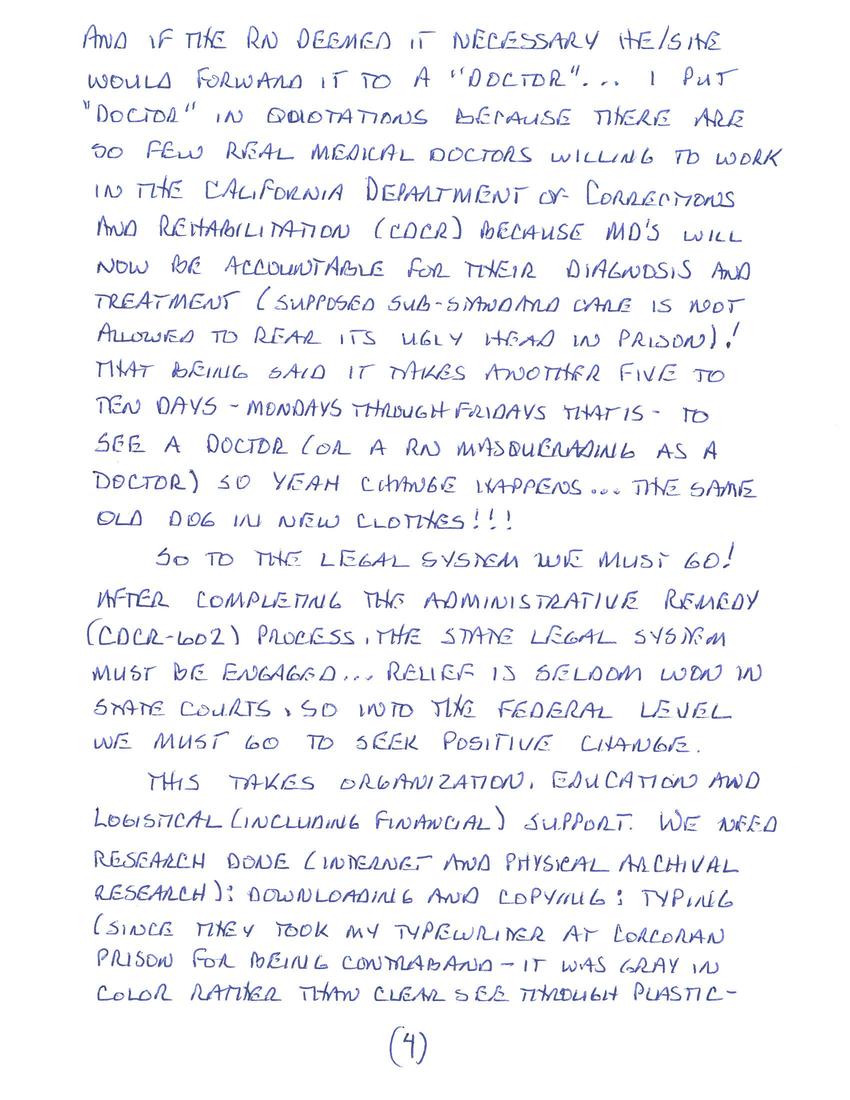 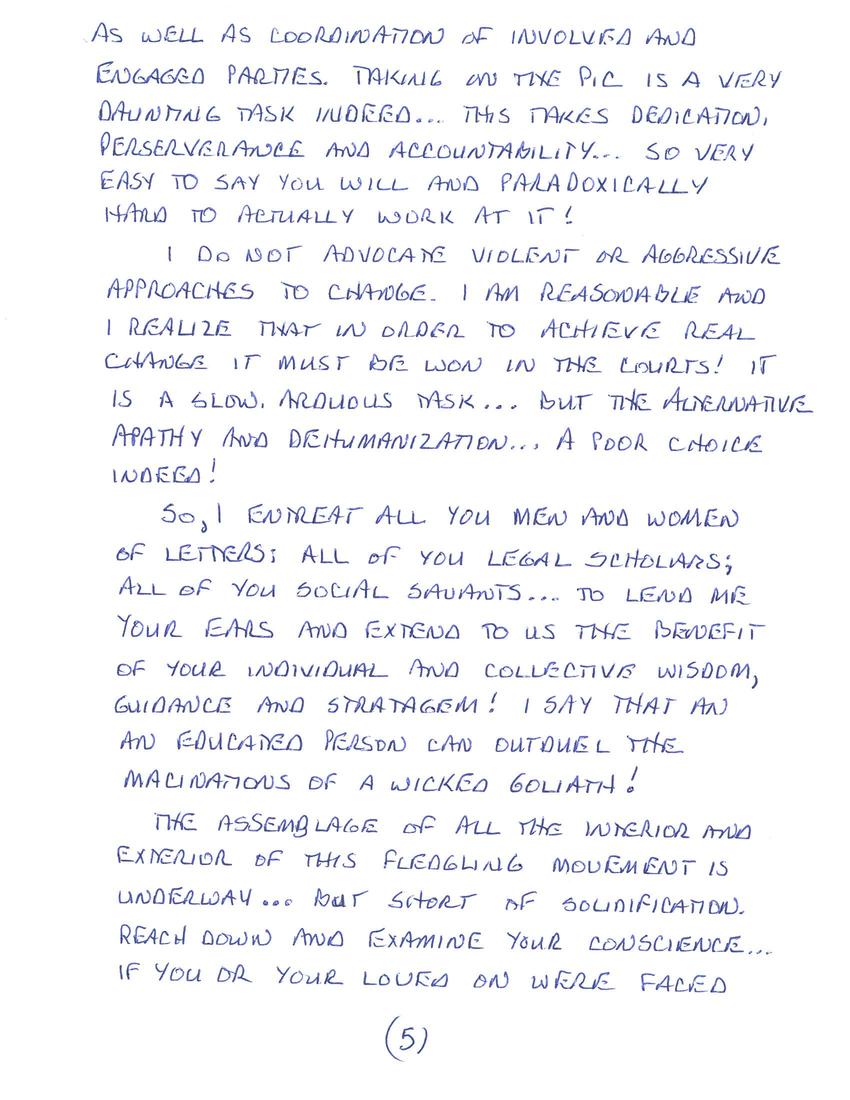 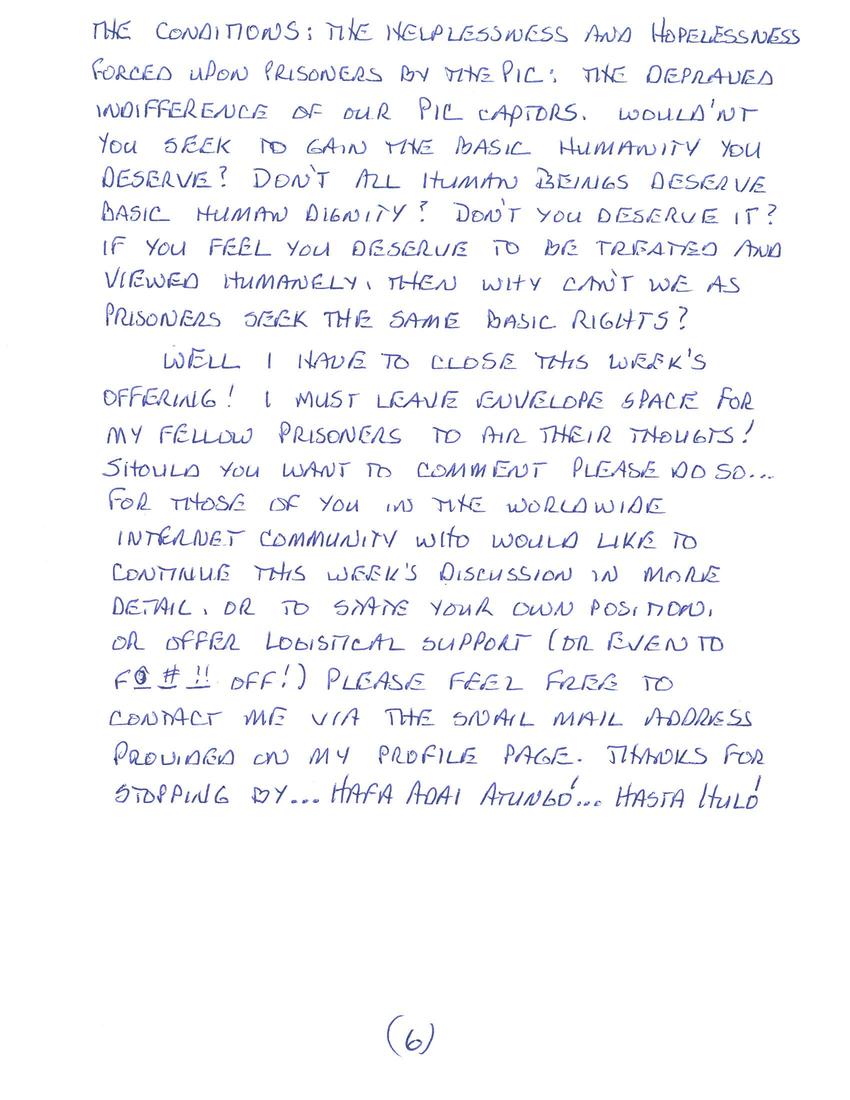 [drawing of a leopard's face roaring. Angle is straight on. Face cuts through first page of text.]

Hello and hafa adai, my fellow bloglodyies! From the triple-digit heat here in (un)pleasant Valley State Prison situated roundabouts Coalinga, California, I would first like to welcome and thank visitors and commenters to my humble dialogue! I extend my thanks and appreciation to those of you from the Amercias, nay, the world, and in particular, those intrepid souls who have reached out to me via snail mail wishing me well; and for those who have pledged their support, I am truly in awe of your response, information, and guidance! In forging my strategies for my initial push forward in seeking to achieve improvement of the human condition of my fellow prisoners... Using positive, forward-moving change! I seek to challenge the oppressive and divisive machinations employed by the Prison Industrial Complex (PIC) and its minions, including but not limited to the oppressors in blue (OIB) who walk amongst our ranks espying our movements and skulkingly putting the PIC's divisive efforts into play at the prisoner to prisoner level.

As prisoners, I say that we must see and become tired of witnessing the conditions of confinement we are partaking in; we must not turn a blind eye to the conditions and circumstances leading up to and including confinement. As well as the feelings of helplessness and hopelessness so we can acknowledge our plight and seek positive change. We must educate ourselves, not only of the campaign we choose to engage, but also of the successes and, more importantly, of the failures of campaigns waged in the past of our brother and sister prisoners who shed tears. Blood and sweat, and, in some cases, their very life force. To afford us the opportunity to stand up and fight on!

Sure, sure. There are already many prisoner rights and human rights organizations, foundations, and groups out there who purport to seek the change and betterment (my word) of the human condition of prisoners! But where are they? I do not see the efforts of their campaigns from my vantage point as a prisoner. Have I seen improvements over the past twenty-five years? Not really... When we see change, it is usually the same old condition but in newer and shinier garb!

I will give you a broad example... Around 2007-2008, a federal receiver was appointed by a three judge U.S. district panel to oversee the improvement and restructuring of the health and mental health care of prisoners... Well, this is 2013, and, yes, things have changed. Medical Technician Assistants (MTAs) were replaced by Registered Nurses (RNs) who are doing the same job as the MTAs did but at higher pay... It used to take five to ten days to see a doctor (even if "emergency" was claimed by the inmate! Only if a medical staff declared that an inmate's symptoms rated "emergency" treatment was that inmate "fast-tracked" into the treatment cycle)... Now you are seen within three to five days by RN. And if the RN deemed it necessary, he/she would forward it to a "doctor"... I put "doctor" in quotations because there are too few real medical doctors willing to work in the California Department of Corrections and Rehabilitation (COCR) because MDs will now be accountable for their diagnosis and treatment (supposed sub-standard care is not allowed to rear its ugly head in prison)! That being said it takes another five to ten days —Monday through Fridays, that is— to see a doctor (or a RN masquerading as a doctor) so, yeah, change happens... The same old dog in new clothes!!!

So to the legal system we must go! After completing the Administrative Remedy (COCR-602) Process, the state legal system must be engaged. Relief is seldom won in state courts, so into the federal level we must go to seek positive change.

This takes organization, education, and logistical (including financial) support. We need research done (inherent and physical archival research), downloading and copying, typing (since they took my typewriter at Corcoran Prison for being contraband—it was gay in color rather than clear see-through plastic—) as well as coordination of involved and engaged parties. Taking on the PIC is a very daunting task indeed. This takes dedication, perseverance, and accountability. So very easy to say you will and paradoxically hard to actually work at it!

I do not advocate violent or aggressive approaches to change. I am reasonable and I realize that in order to achiever real change, it must be won in the courts! It is a slow, arduous task, but the alternative is apathy and dehumanization. A poor choice indeed!

So I entreat all you men and women of letters, all of you legal scholars, all of you social savants to lend me your ears and extend to us the benefit of your individual and collective wisdom, guidance and stratagem! I say that an educated person can outduel the machinations of the wicked Goliath!

The assemblage of all the interior and exterior of this fledgling movement is underway, but start of solidification. Reach down and examine your conscience. If you or you loved one were faced these conditions: the helplessness and hopelessness forced upon prisoners by the PIC, the depraved indifference of our PIC captors, wouldn't you seek to gain the basic humanity you deserve? Don't all human being deserve basic human dignity? Don't you deserve it? If you feel you deserve to be treated and viewed humanely, then why can't we as prisoners seek the same basic rights?

Well, I have to close this week's offering! I must leave envelope space for my fellow prisoners to air their thoughts! Should you want to comment, please do so. For those of you in the worldwide Internet community who would like to continue this week's discussion in more detail, or to state your own position, or offer logistical support (or even to f@#!! off!), please feel free to contact me via the snail mail address provided on my profile page.