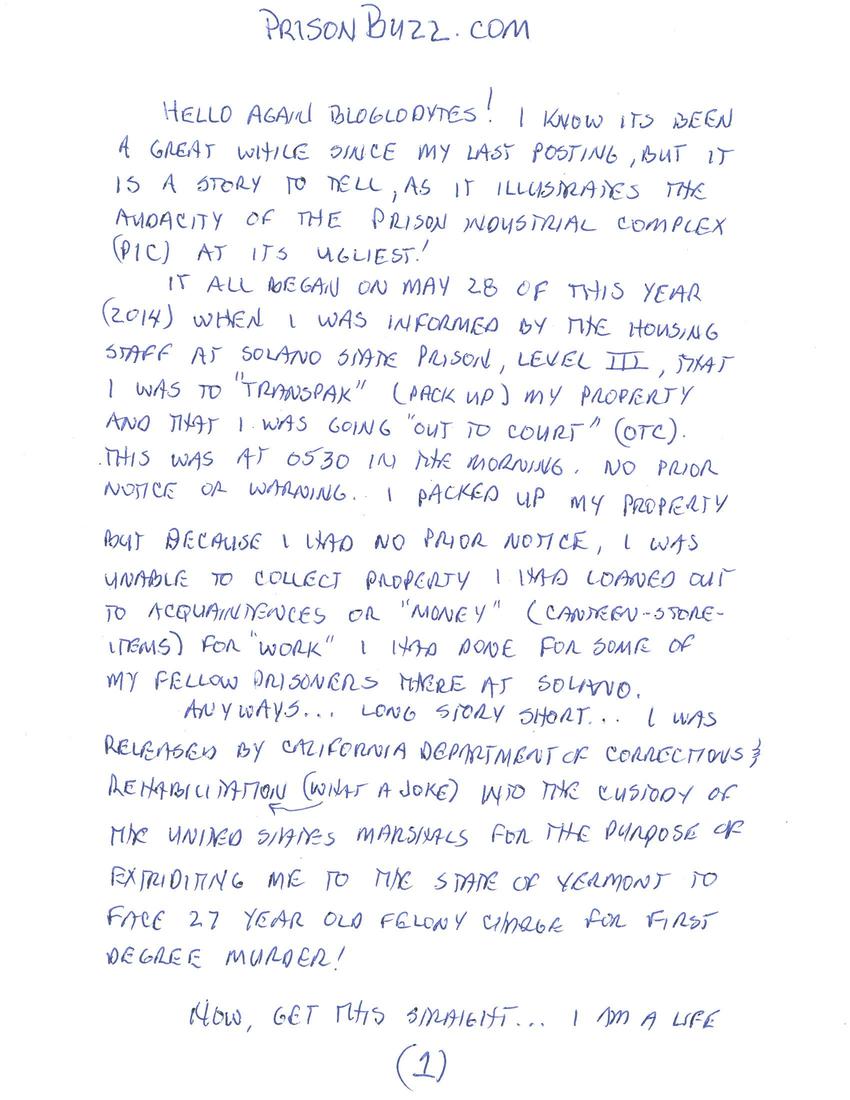 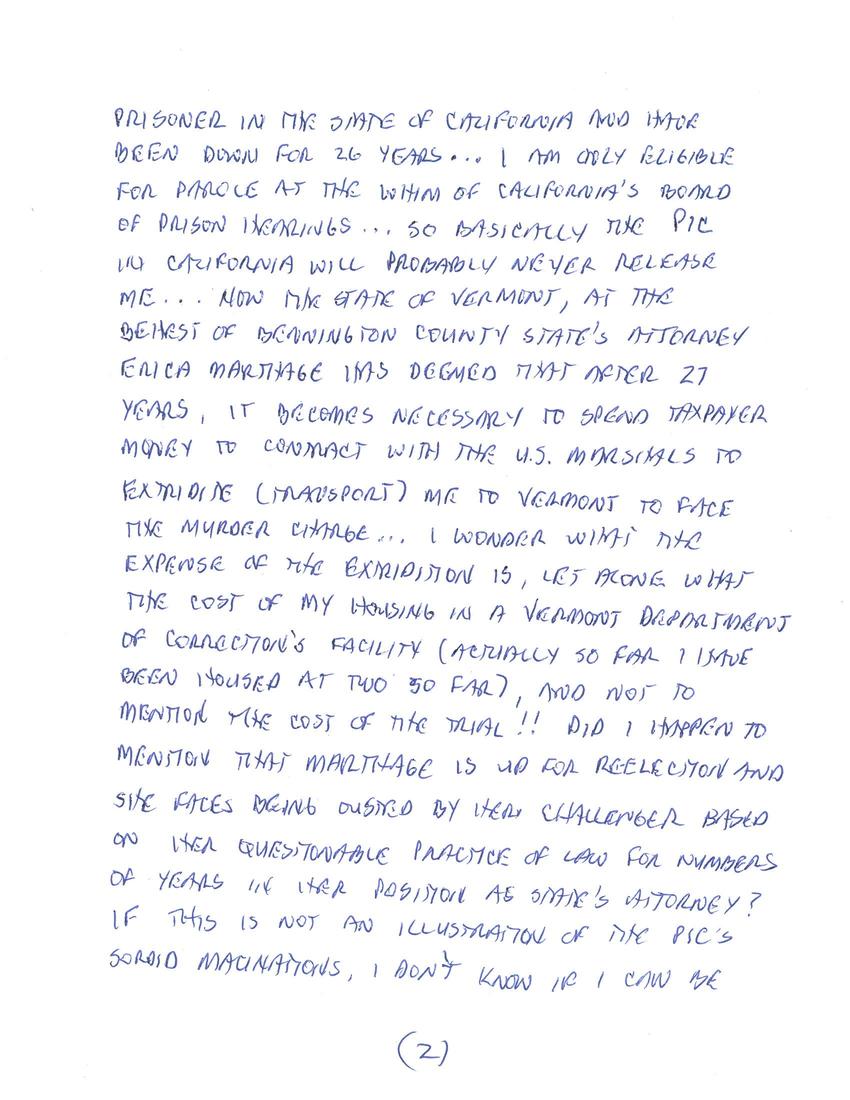 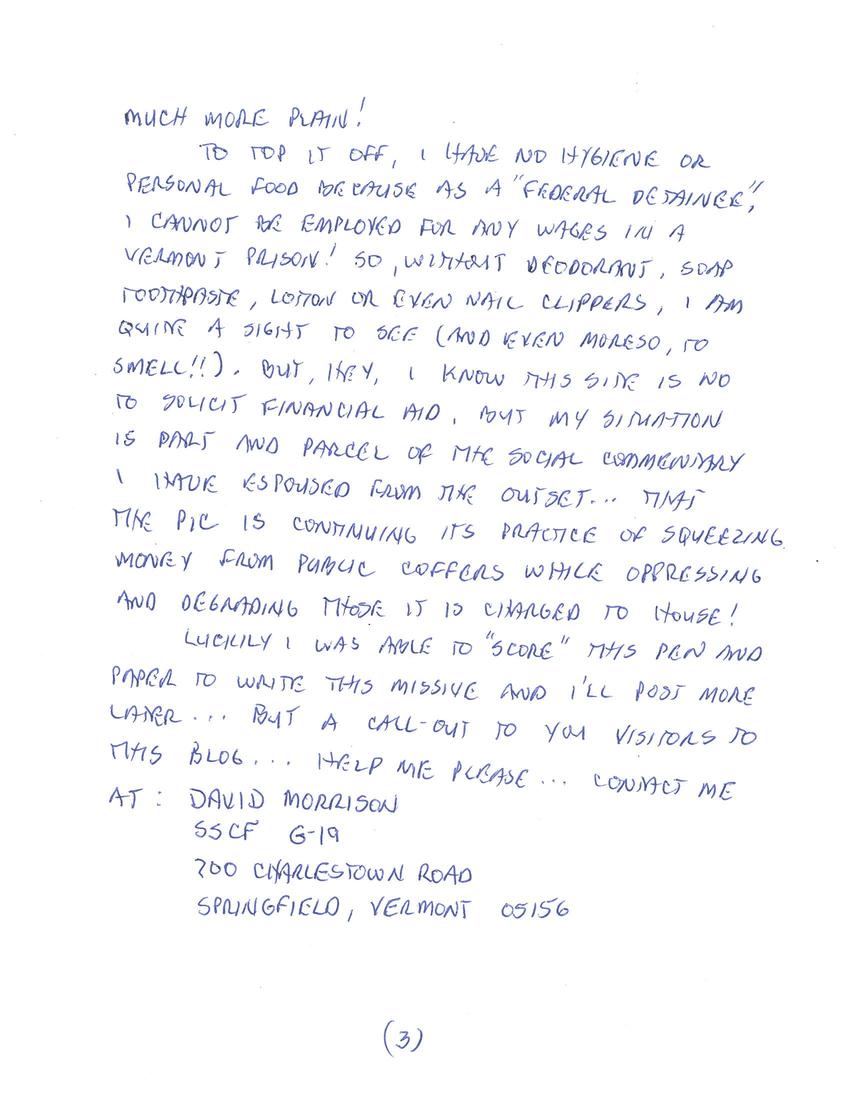 Hello again Bloglodytes! I know its been a great while since my last posting, but it is a story to tell, as it illustrates the audacity of the prison industrial complex (pic) at its ugliest!

It all began on May 28 of this year (2014) when I was informed by the housing staff at Solano State Prisosn, Level III, that I was to "transpak" (pack up) my property and that I was going "out to court" (OTC). That was at 0530 in the morning. No prior notice or warning. I packed up my property but because I had no prior notice, I was unable to collect property I had loaned to acquaintances or "money" (canteen-store-items)for "work" I had done for some of my fellow prisoners there at Solano.

Anyways...long story short...I was released by California Department of Corrections & Rehabilitation (what a joke) into the custody of the United States Marshals for the purpose of extraditing me to the State of Vermont to face a 27 year old felony charge for first degree murder!

Now, get this straight...I am a life prisoner in the State of California and have been down for 26 years...I am only eligible for parole at the whim of California's Board of Prison Hearings...So basically the PIC in California will probably never release me...Now the State of Vermont, at the behest of Bennington County State's Attorney, Erica Marthage, has deemed that after 27 years, it becomes necessary to spend taxpayer money to contract with the U.S. Marshals to extradite (transport) me to Vermont to face the murder charge...I wonder what the expense of the extradition is, let alone what the cost of my housing in a Vermont Department of Correction's facility (actually so fair I have been housed at two so far) and not mention the cost of the trial!! Did I happen to mention that Marthage is up for re-election and she faces being ousted by her challenger based on her questionable practice of law for numbers of years in her position as the State's Attorney? If this is not an illustration of the PIC's sordid macinations, I don't know if I can be much more plain!

To top it off, I have no hygiene or personal food because as a "federal detainee", I cannot be employed for any wages in a Vermont prison! So, without deodorant, soap, toothpaste, lotion or even nail clippers, I am quite a sight to see (and even moreso, to smell!!). But, hey, I know this side is not to solicit financial aid, but my situation is part and parcel of the social commentary I have espoused from the outset...That the PIC is continuing its practice of squeezing money from public coffers while oppressing and degrading those it is charged to house!

Luckily I was able to "score" this pen and paper to write this missive and I'll post more later...But a call-out to you visitors to this blog...Help me please...Contact me at: