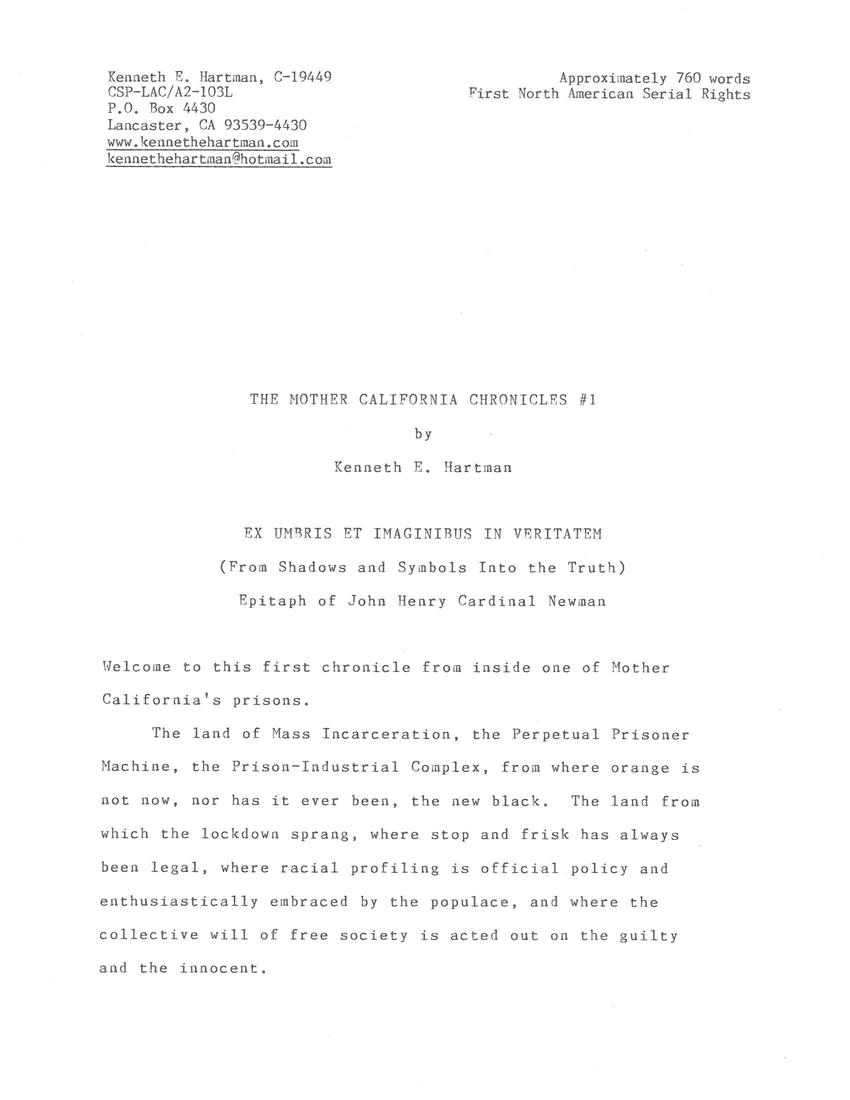 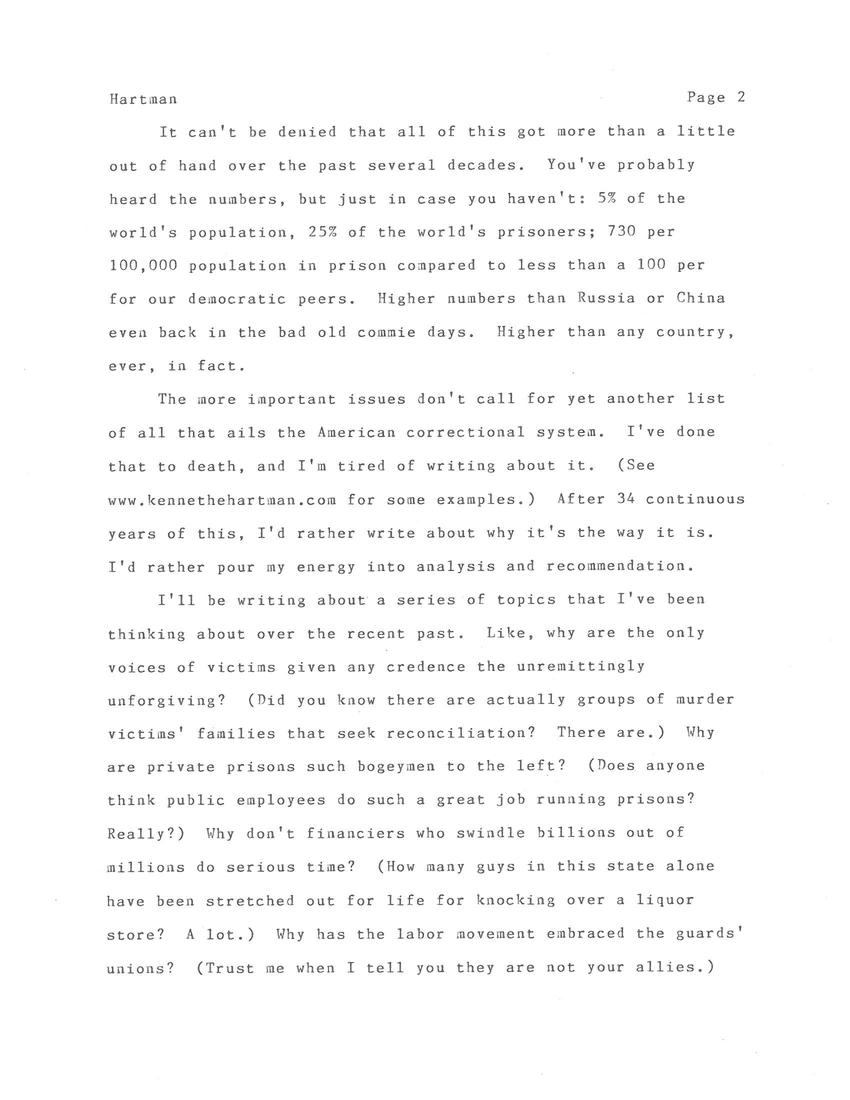 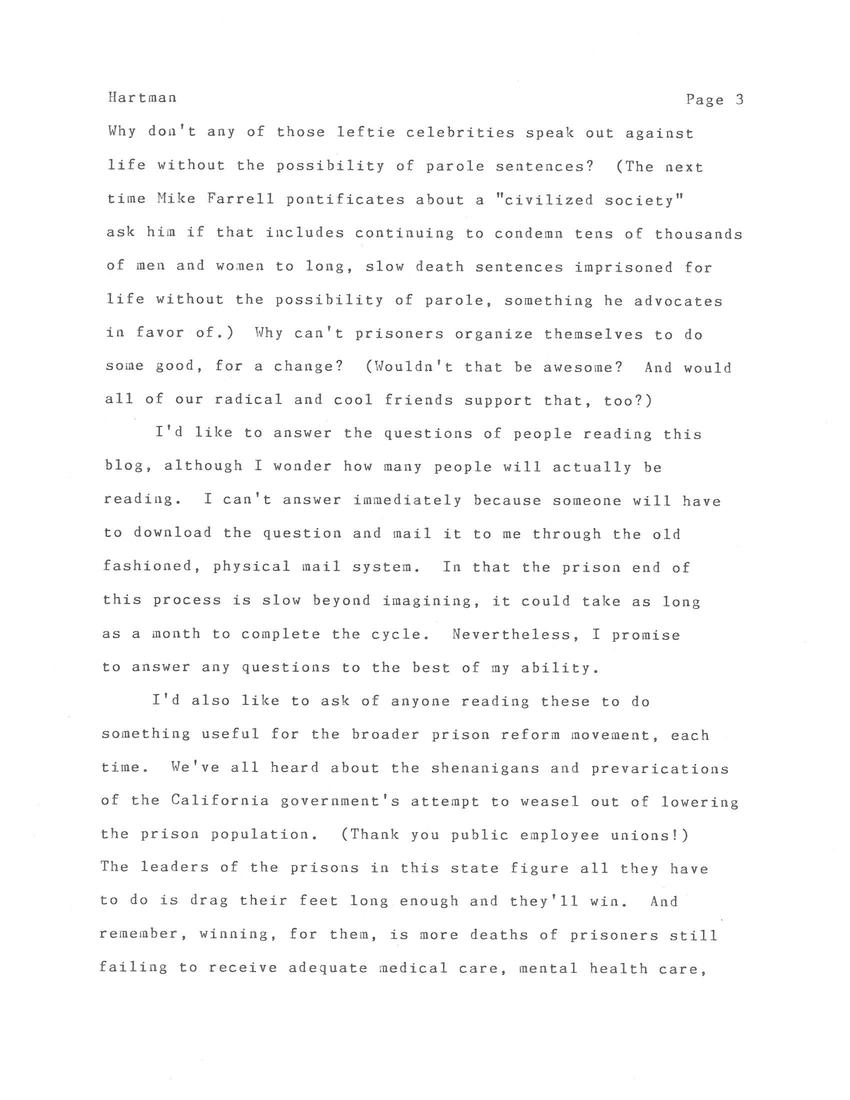 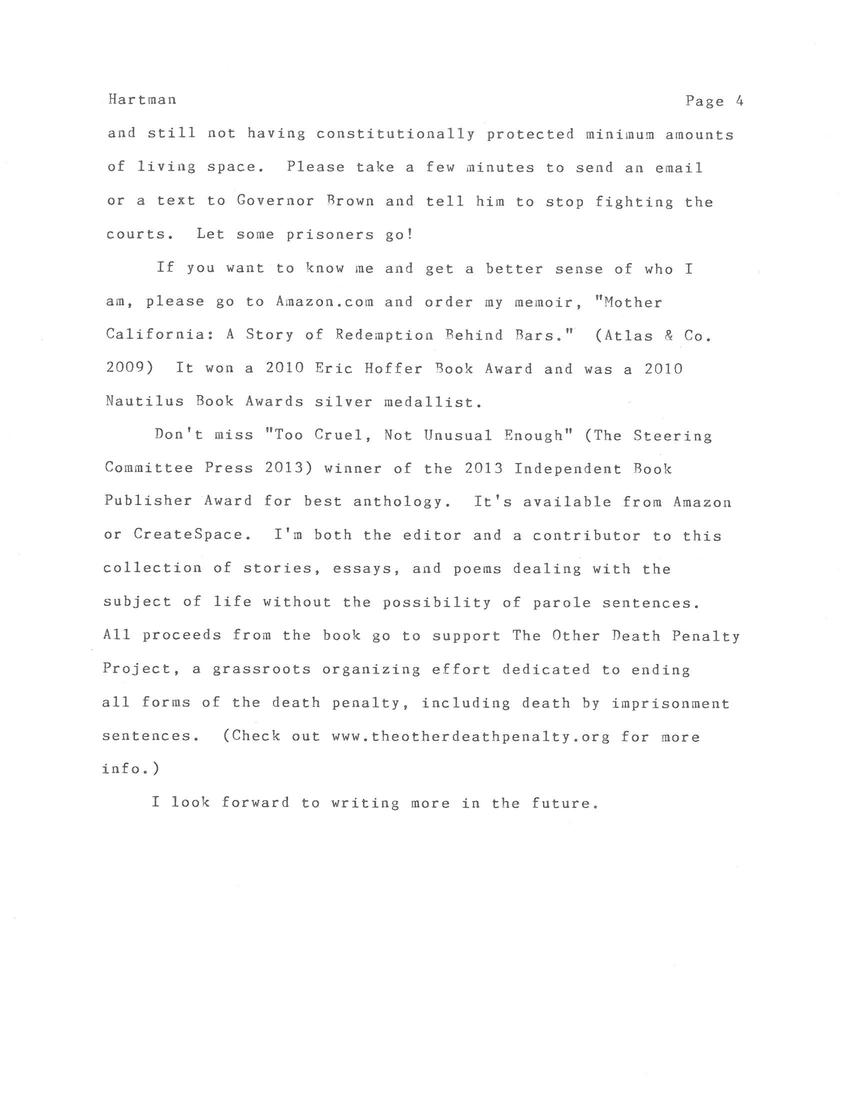 Welcome to this first chronicle from inside one of Mother California's prisons.

The land of Mass Incarceration, the Perpetual Prisoner Machine, the Prison-Industrial Complex, from where orange is not now, nor has it ever been, the new black. The land from which the lockdown sprang, where stop and frisk has always been legal, where racial profiling is official policy and enthusiastically embraced by the populace, and where the collective will of free society is acted out on the guilty and the innocent.

It can't be denied that all of this got more than a little out of hand over the past several decades. You've probably heard the numbers, but just in case you haven't: 5% of the world's population, 25% of the world's prisoners; 730 per 100,000 population in prison compared to less than a 100 per for our democratic peers. Higher numbers than Russia or China even back in the bad old commie days. Higher than any country, ever, in fact.

The more important issues don't call for yet another list of all that ails the American correctional system. I've done that to death, and I'm tired of writing about it. (See www.kennethehartman.com for some examples. After 34 continuous years of this, I'd rather write about why it's the way it is. I'd rather pour my energy into analysis and recommendation.

I'll be writing about a series of topics that I've been thinking about over the recent past. Like, why are the only voices of victims given any credence the unremittingly unforgiving? (Did you know there are actually groups of murder victims' families that seek reconciliation? There are.) Why are private prisons such bogeymen to the left? (Does anyone think public employees do such a great job running prisons? Really?) Why don't financiers who swindle billions out of millions do serious time? (How many guys in this state alone have been stretched out for life for knocking over a liquor store? A lot.) Why has the labor movement embraced the guards' unions? (Trust me when I tell you they are not your allies.) Why don't any of these leftie celebrities speak out against life without the possibility of parole sentences? (The next time Mike Farrell pontificates about a "civilized society", ask him if that includes continuing to condemn tens of thousands of men and women to long, slow death sentences imprisoned for life without the possibility of parole, something he advocates in favor of.) Why can't prisoners organize themselves to do some good, for a change? (Wouldn't that be awesome? And would all of our radical and cool friends support that, too?)

I'd like to answer the questions of people reading this blog, although I wonder how many people will actually be reading. I can't answer immediately because someone will have to download the question and mail it to me through the old fashioned, physical mail system. In that the prison end of this process is slow beyond imagining, it could take as long as a month to complete the cycle. Nevertheless, I promise to answer any questions to the best of my ability.

I'd also like to ask of anyone reading these to do something useful for the broader prison reform movement, each time. We've all heard about the shenanigans and prevarications of the California government's attempt to weasel out of lowering the prison population. (Thank you, public employee unions!) The leaders of the prisons in this state figure all they have to do is drag their feet long enough and they'll win. And remember, winning, for them, is more deaths of prisoners still failing to receive adequate medical care, mental health care, and still not having constitutionally protected minimum amounts of living space. Please take a few minutes to send an email or a text to Governor Brown and tell him to stop fighting the courts. Let some prisoners go!

If you want to know me and get a better sense of who I am, please go to Amazon.com and order my memoir, "Mother California: A Story of Redemption Behind Bars". (Atlas & Co. 2009) It won a 2010 Eric Hoffer Book Award and was a 2010 Nautilus Book Awards silver medallist.

Don't miss "Too Cruel, Not Unusual Enough" (The Steering Committee Press 2013) winner of the 2013 Independent Book Publisher Award for best anthology. It's available from Amazon or CreateSpace. I'm both the editor and a contributor to this collection of stories, essays, and poems dealing with the subject of life without the possibility of parole sentences. All proceeds from the book go to support The Other Death Penalty Project, a grassroots organizing effort dedicated to ending all forms of the death penalty, including death by imprisonment sentences. (Check out www.theotherdeathpenalty.org for more info.)

I look forward to writing more in the future.

I have a question about public employee unions. I've read most of what you have written and want to hear more of your take on how guard union attitudes might change, or possibly what influences attitudes. I'm in Illinois, retired as a public employee (in a library) My local does not include guards but they are part of the state group - AFSCME. Illinois has a current House bill to allow prisoners who are 50 or older and have served at least 25 continuous years to petition for what amounts to re-sentencing. The bill has a lot of detail, including that the individual victims and families will be able to make a statement to the people doing the deciding about the petition. I don't think this bill will make it to vote this year; it is stuck in a rules committee, but that it has made it that far is a start.

Anyway, people involved are sure the guards will try to quash anything like this in the legislature. All I can do is to try to use my limited union connections to influence how the union as a whole reacts. Illinois is not California, but as far as I can tell there is a lot of similarity in the prison systems, and public attitudes. We have no death penalty, but LWOP is alive and well. The fact that House Bill 3668 exists is a bit of a miracle. I'd like to see it get more attention, and be put forward again if it does not come to vote this year.

Any thoughts you might have will be valuable to me as I try in a small way to influence thinking the my union.
(scanned reply – view as blog post)
uploaded Aug. 16, 2014.  Original (PDF) 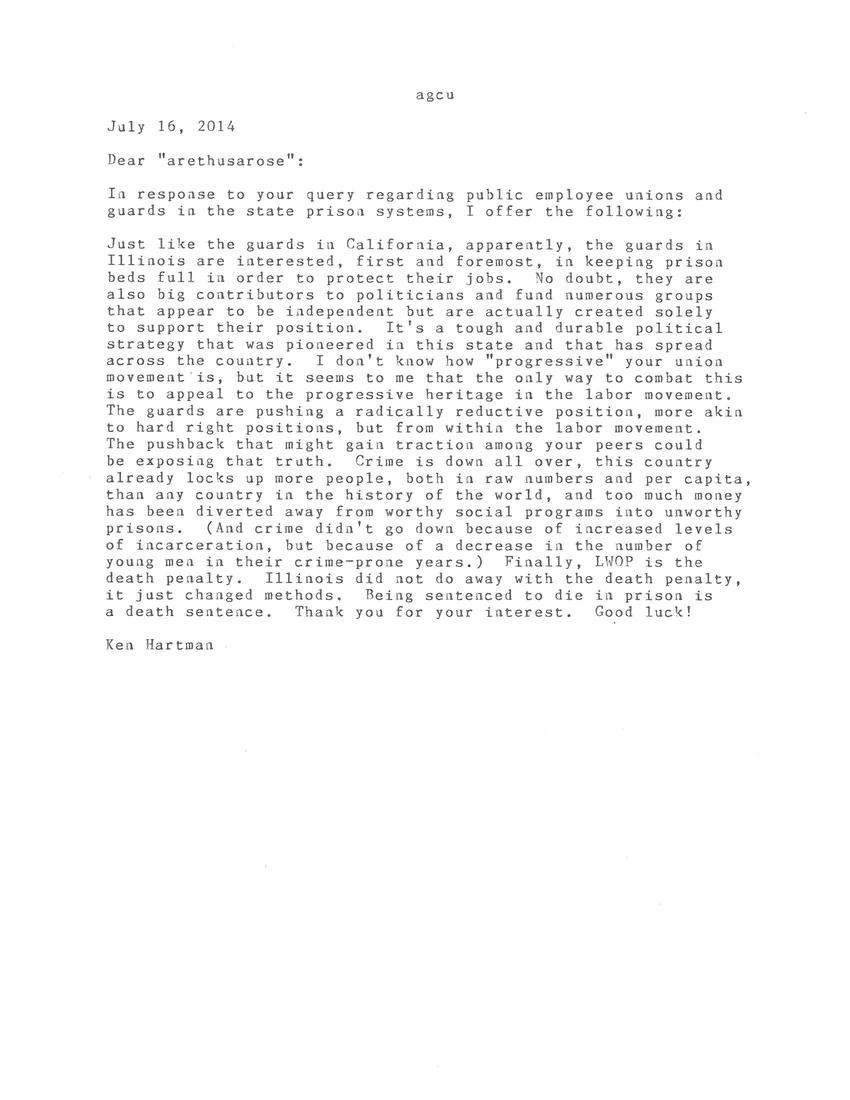