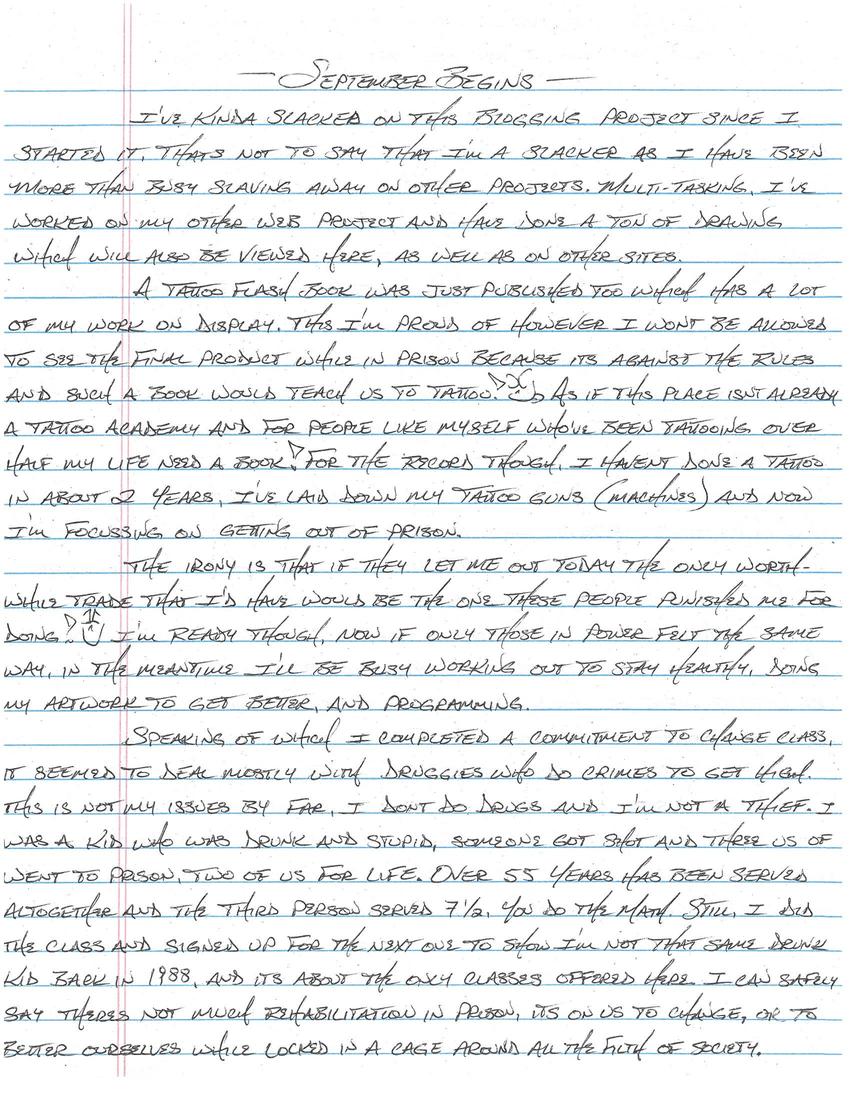 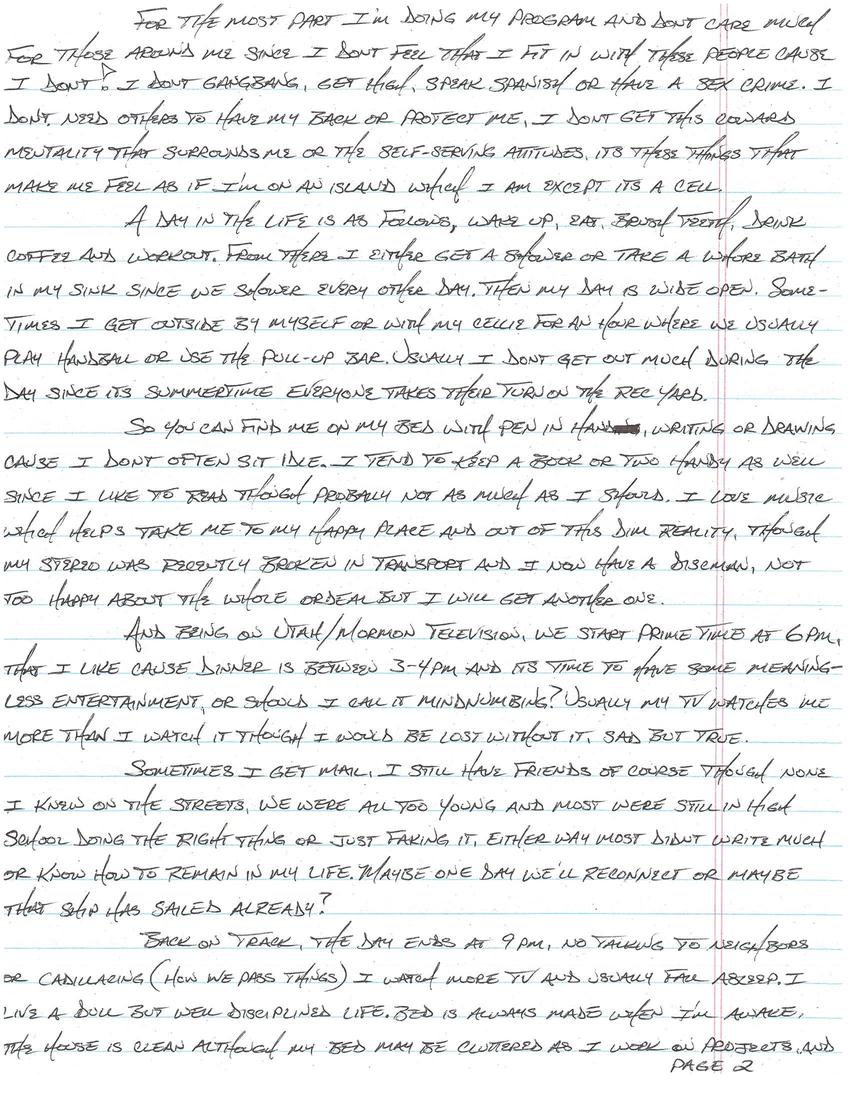 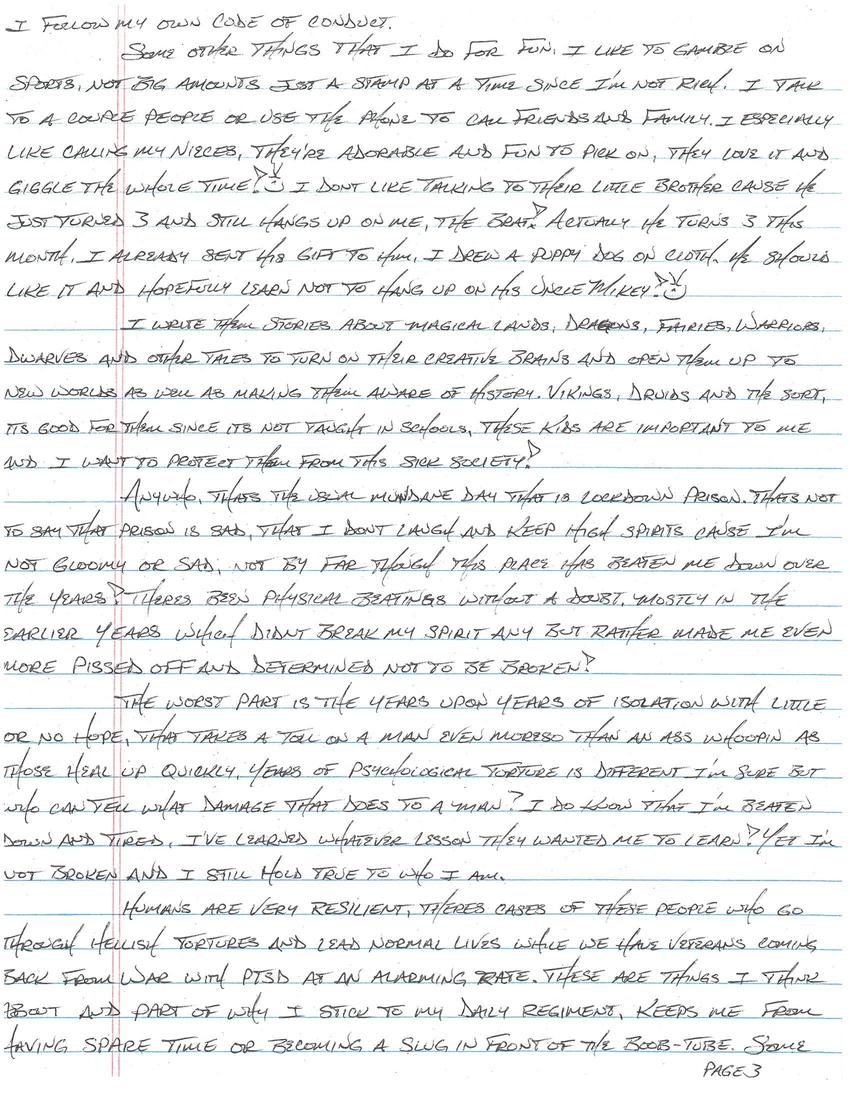 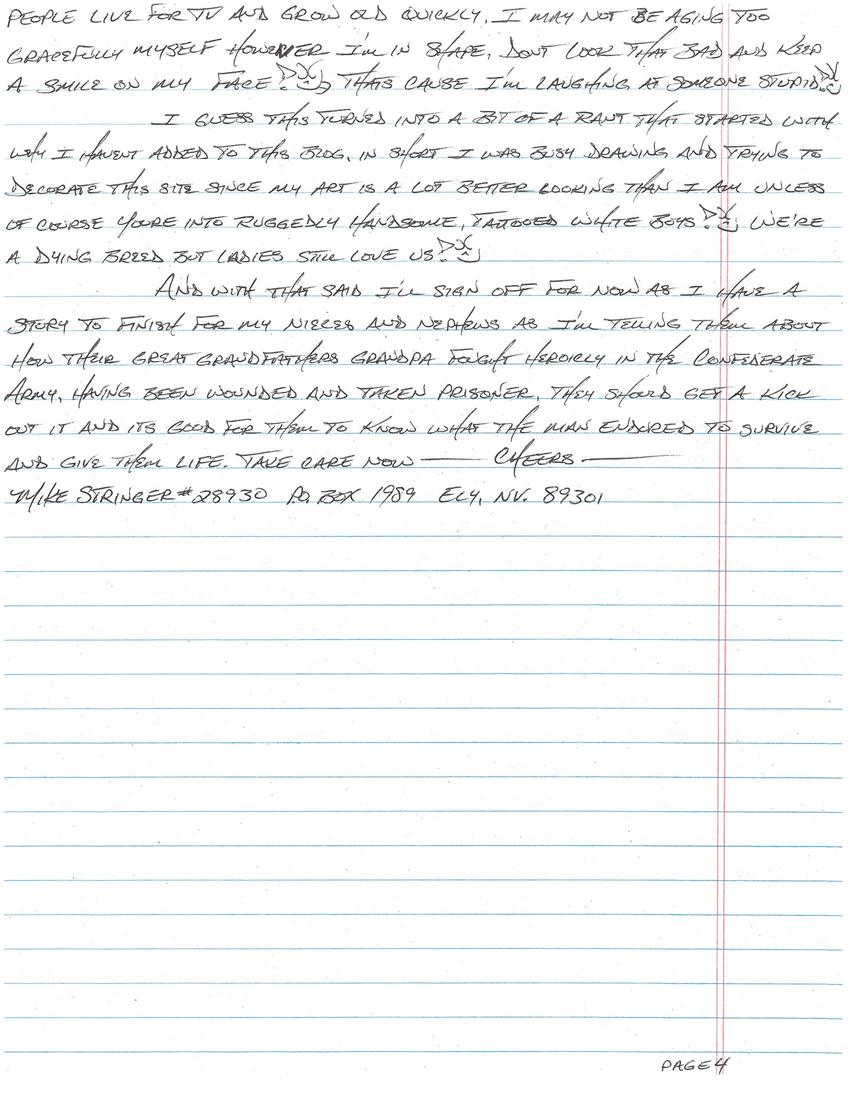 I've kinda slacked on this blogging project since I started it. That's not to say that I'm a slacker as I have been more than busy slaving away on other projects. Multi-tasking, I've worked on my other web project and have done a ton of drawing which will also be viewed here, as well as on other sites.

A tattoo flash book was just published too which has a lot of my work on display. This I'm proud of, however I won't be allowed to see the final product while in prison because it's against the rules and such a book would teach us to tattoo! :P As if this place isn't already a tattoo academy and for people like myself who've been tattooing over half my life need a book! For the record though, I haven't done a tattoo in about 2 years, I've laid down my tattoo guns (machines) and now I'm focusing on getting out of prison.

The irony is that if they let me out today the only worthwhile trade that I'd have would be the one these people punished me for doing! :) I'm ready though, now if only those in power felt the same way, in the meantime I'll be busy working out to stay healthy, doing my artwork to get better, and programming.

Speaking of which I completed a Commitment to Change class, it seemed to deal mostly with druggies who do crimes to get high. This is not my issues by far, I don't do drugs and I'm not a thief. I was a kid who was drunk and stupid, someone got shot and three us of went to prison, two of us for life. Over 55 years has been served altogether and the third person served 7 1/2, you do the math. Still, I did the class and signed up for the next one to show I'm not that same drunk kid back in 1988, and it's about the only classes offered here. I can safely say there's not much rehabilitation in prison, it's on us to change, or to better ourselves while locked in a cage around all the filth of society.

A day in the life is as follows, wake up, eat, brush teeth, drink coffee and work out. From there I either get a shower or take a whore bath in my sink since we shower every other day. Then my day is wide open. Sometimes I get outside by myself or with my cellie for an hour where we usually play handball or use the pull-up bar. Usually I don't get out much during the day, since it's summertime everyone takes their turn on the rec yard.

So you can find me on my bed with pen in hand, writing or drawing 'cause I don't often sit idle. I tend to keep a book or two handy as well since I like to read though probably not as much as I should. I love music which helps take me to my happy place and out of this dim reality, though my stereo was recently broken in transport and I now have a Discman, not too happy about the whole ordeal but I will get another one.

And being on Utah/Mormon television, we start primetime at 6pm, that I like 'cause dinner is between 3-4pm and it's time to have some meaningless entertainment, or should I call it mindnumbing? Usually my TV watches me more than I watch it though I would be lost without it, sad but true.

Sometimes I get mail. I still have friends of course, though none I knew on the streets. We were all too young and most were still in high school doing the right thing or just faking it. Either way most didn't write much or know how to remain in my life. Maybe one day we'll reconnect or maybe that ship has sailed already?

Back on track, the day ends at 9pm, no talking to neighbors or Cadillacing (how we pass things). I watch more TV and usually fall asleep. I live a dull but well disciplined life. Bed is always made when I'm awake, the house is clean although my bed may be cluttered as I work on projects, and I follow my own code of conduct.

Some other things that I do for fun, I like to gamble on sports, not big amounts, just a stamp at a time since I'm not rich. I talk to a couple people or use the phone to call friends and family. I especially like calling my nieces, they're adorable and fun to pick on, they love it and giggle the whole that! :) I don't like talking to their little brother 'cause he just turned 3 and still hangs up on me, the brat! Actually he turns 3 this month. I already sent his gift to him. I drew a puppy dog on cloth. He should like it and hopefully learn not to hang up on his Uncle Mikey! :)

I write them stories about magical lands, dragons, fairies, warriors, dwarves and other tales to turn on their creative brains and open them up to new worlds as well as making them aware of history. Vikings, Druids and the sort, it's good for them since it's not taught in schools. These kids are important to me and I want to protect them from this sick society!

Anywho, that's the usual mundane day that is lockdown prison. That's not to say that prison is sad, that I don't laugh and keep high spirits 'cause I'm not gloomy or sad; not by far though this place has beaten me down over the years! There's been physical beatings without a doubt, mostly in the earlier years which didn't break my spirit any but rather made me even more pissed off and determined not to be broken!

The worst part is the years upon years of isolation with little or no hope, that takes a toll on a man even moreso than an ass whoopin' as those heal up quickly. Years of psychological torture is different I'm sure but who can tell what damage that does to a man? I do know that I'm beaten down and tired, I've learned whatever lesson they wanted me to learn! Yet I'm not broken and I still hold true to who I am.

Humans are very resilient, there's cases of these people who go through hellish tortures and lead normal lives while we have veterans coming back from war with PTSD at an alarming rate. These are things I think about and part of why I stick to my daily regiment, keeps me from having spare time or becoming a slug in front of the boob-tube. Some people live for it and grow old quickly. I may not be aging too gracefully myself, however I'm in shape, don't look that bad and keep a smile on my face! :P That's 'cause I'm laughing at someone stupid! :)

I guess this turned into a bit of a rant that started with why I haven't added to this blog, in short I was busy drawing and trying to decorate this site since my art is a lot better looking than I am unless of course you're into ruggedly handsome tattooed white boys! :) We're a dying breed but ladies still love us! :)

And with that said I'll sign off for now as I have a story to finish for my nieces and nephews as I'm telling them about how their great grandfather's grandpa fought heroically in the Confederate Army, having been wounded and taken prisoner. They should get a kick out it and it's good for them to know what the man endured to survive and give them life. Take care now - Cheers -