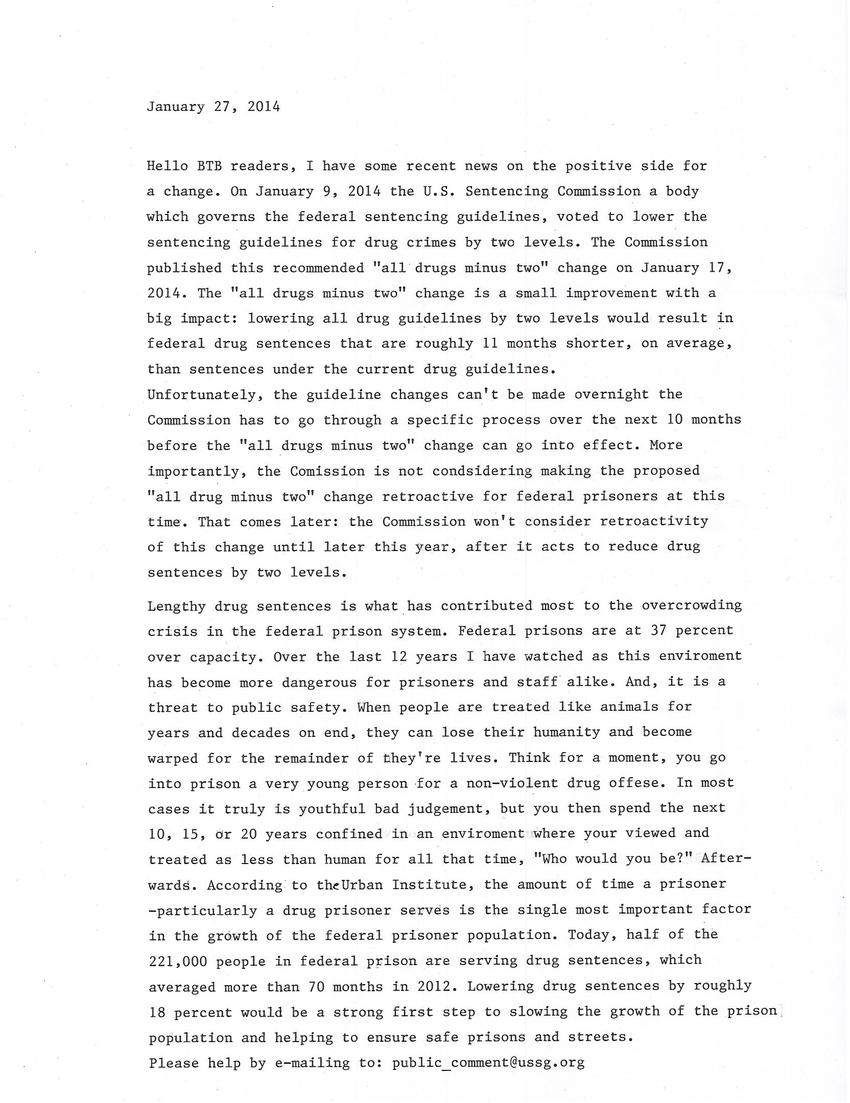 I have some recent news on the positive side for a change. On January 9, 2014, the U.S. Sentencing Commission, a body which governs the federal sentencing guidelines, voted to lower the sentencing guidelines for drug crimes by two levels. The commission published this recommended "all drugs minus two" change on January 17, 2014. The "all drugs minus two" change is a small improvement with a big impact: lowering all drug guidelines by two level would result in federal drug sentences that are roughly 11 months shorter, on average, than sentences under the current drug guidelines.

Unfortunately, the guideline changes can't be made overnight. The commission has to go through a specific process over the next 10 months before the "all drugs minus two" change can go into effect. More importantly, the commission is not considering making the proposed "all drug minus two" change retroactive for federal prisoners at this time. That comes later. The commission won't consider retroactive change regarding this guideline until later this year, after it acts to reduce drug sentences by two levels.

Lengthy drug sentences are what has contributed most to the overcrowding crisis in the federal prison system. Federal prisons are at 37 percent overcapacity. Over the last 12 years, I have watched as this environment has become more dangerous for prisoners and staff alike. And it is a threat to public safety. When people are treated like animals for years and decades on end, they can lose their humanity and become warped for the remainder of their lives.

Think for a moment: you go into a prison, a very young person for a non-violent drug offense. In most cases, it truly is youthful, bad judgment. But you then spend the next 10, 15, 20 years confined in an environment where you're viewed and treated as less than human for all that time. Who would you be afterwards?

According to the Urban Institute, the amount of time a prisoner—particularly a drug prisoner—serves is the single most important factor in the growth of the federal prisoner population. Today, half of the 221,000 people in federal prison are serving drug sentences, which averaged more than 70 months in 2012. Lowering drug sentences by roughly 18 percent would be a strong first step to slowing the growth of the population and helping to ensure safe prisons and streets.