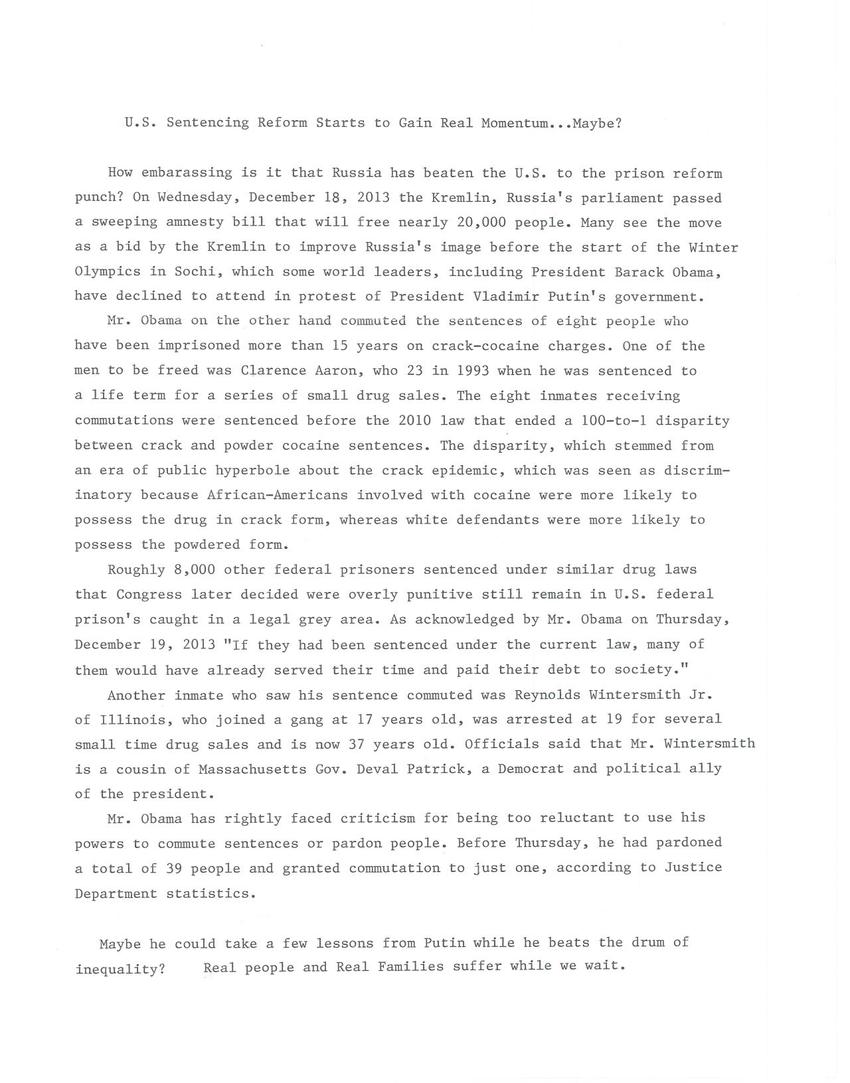 How embarrassing is it that Russia has beaten the U.S. to the prison reform punch? On Wednesday, December 18, 2013, the Kremlin, Russia's parliament, passed a sweeping amnesty bill that will free nearly 20,000 people. Many see the move as a bid by the Kremlin to improve Russia's image before the start of the Winter Olympics in Sochi, which some world leaders, including President Barack Obama, have declined to attend in protest of President Vladmir Putin's government.

Mr. Obama on the other hand commuted the sentences of eight people who have been imprisoned more than 15 years on crack cocaine charges. One of the men to be freed was Clarence Aaron, who was 23 in 1993 when he was sentenced to a life term for a series of small drug sales. The eight inmates receiving commutations were sentenced before the 2010 law that ended a 100-to-1 disparity between crack and powder cocaine sentences. The disparity, which stemmed from an era of public hyperbole about the crack epidemic, which was seen as discriminatory because African-Americans involved with cocaine were more likely to posses the drug in crack form, whereas white defendants were more likely to posses the powdered form.

Roughly 8,000 other federal prisoners sentenced under similar drug laws that Congress later decided were overly punitive still remain in U.S. federal prisons caught in a legal grey area. As acknowledged by Mr. Obama on Thursday, December 19, 2013, "If they had been sentenced under the current law, many of them would have already served their time and paid their debt to society."

Another inmate who saw his sentence commuted was Reynolds Wintersmith Jr. of Illinois, who joined a gang at 17 years old. Officials said that Mr. Wintersmith is a cousin of Massachusetts Gov. Deval Patrick, a Democrat and political ally of the president.

Mr. Obama has rightly faced criticism for being too reluctant to use his powers to commute sentences or pardon people. Before Thursday, he had pardoned a total of 39 people and granted commutation to just one, according to Justice Department statistics.

Maybe he could take a few lessons from Putin while he beats the drum of inequality? Real people and real families suffer while we wait.