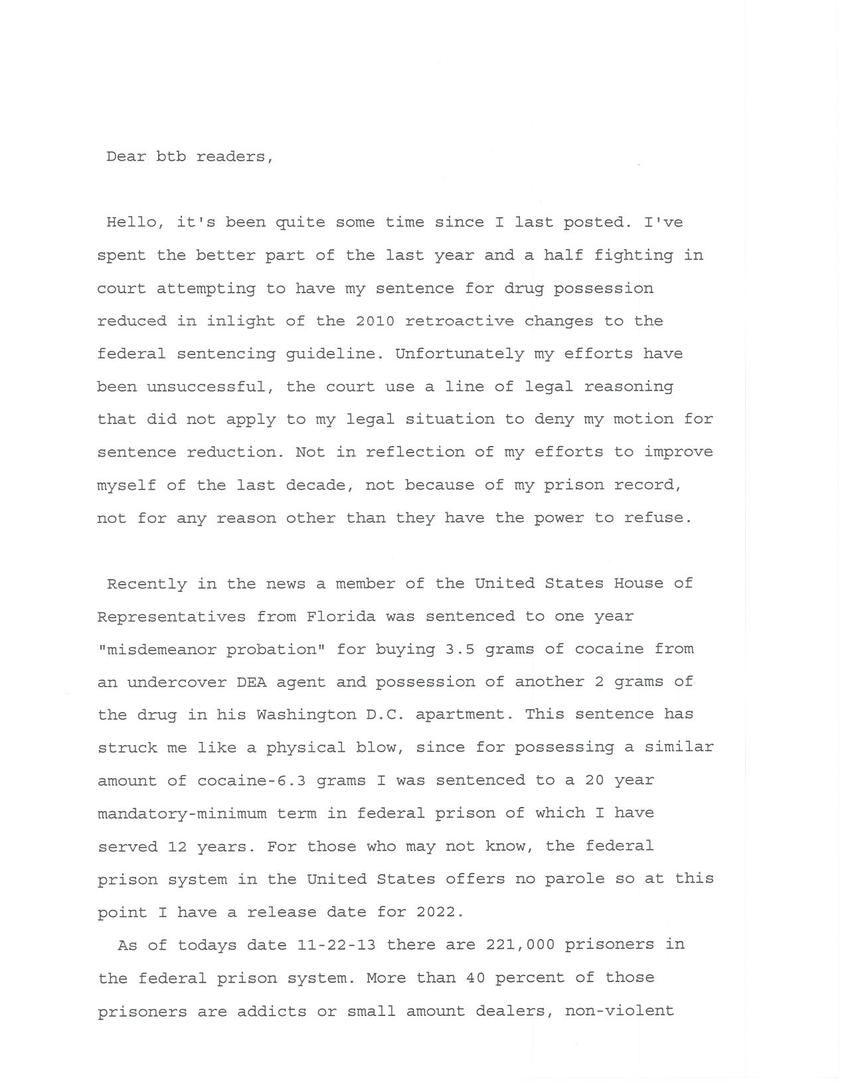 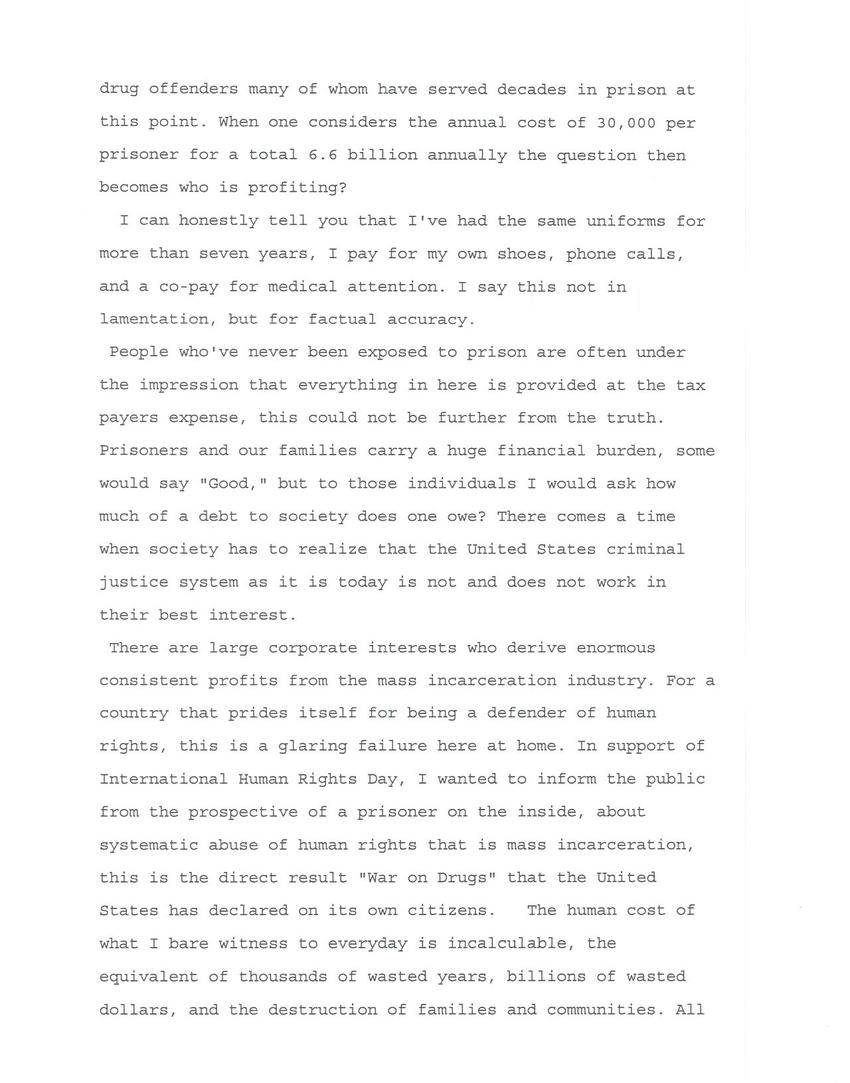 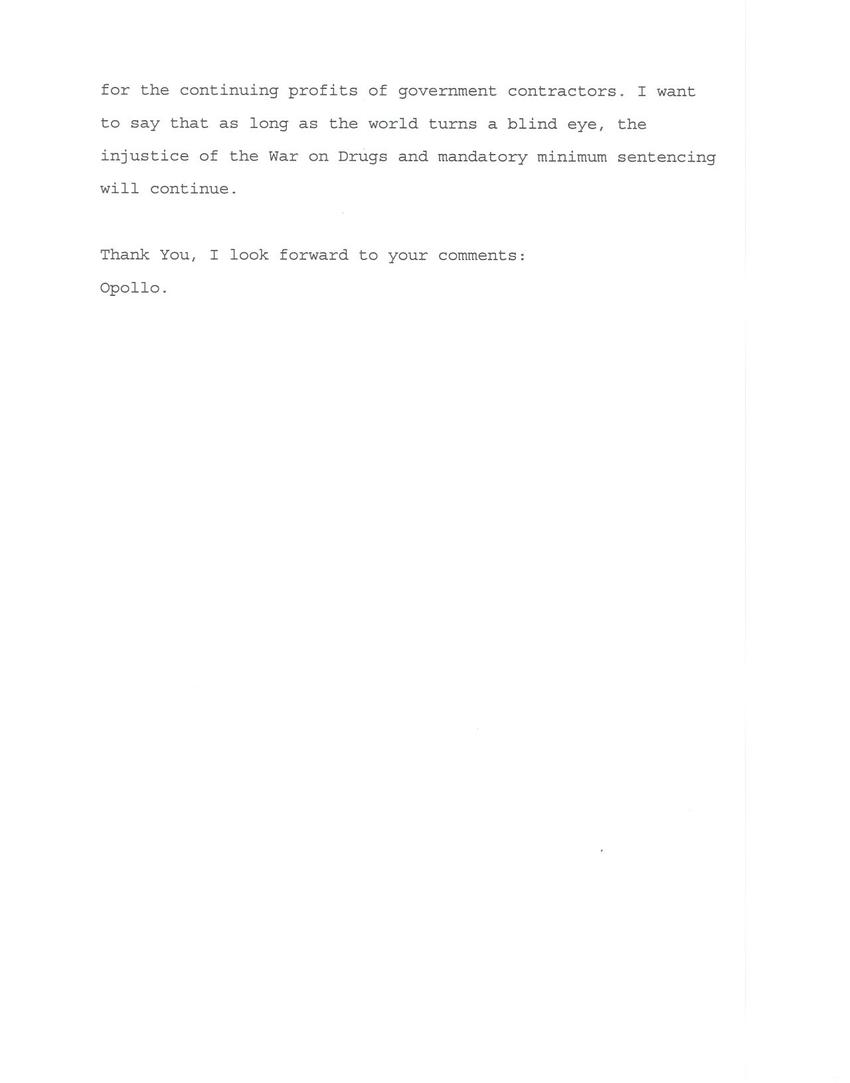 Hello, it's been quite some time since I last posted. I've
spent the better part of the last year and a half fighting in
court attempting to have my sentence for drug possession
reduced in light of the 2010 retroactive changes to the
federal sentencing guideline. Unfortunately my efforts have
been unsuccessful, the court use a line of legal reasoning
that did not apply to my legal situation to deny mt motion for
sentence reduction. Not in the reflect of my efforts to improve
myself of the last decade, not because of my record
not for any other than they the power to refuse.

Recently in the news a member of the United States House of
Representatives from Florida was sentenced to one year
"misdemeanor probation" for buying 3.5 grams of cocaine from
an undercover DEA agent and possession of another 2 grams of
the drug in his Washington D.C. apartment. This sentence has
struck me like a physical blow, since for possessing a similar
amount of cocaine-6.3 grams I was sentenced to a 20 year
mandatory-minimum term in federal prison of which I have
served 12 years. For those who may not know the federal
prison system in the United States offers no parole so at this
point I have a release date for 2022.

As of today's date 11-22-13 there are 221, 000 prisoners
in the federal prison system. More than 40 percent of those
prisoners are addicts or small amount dealers, non-violent
drug offenders many of whom have served decades in prison at
this point. When one considers the annual cost of 30,000$ per
prisoner for a total 6.6$ billion annually the question then
becomes who is profiting?

I can honestly tell you that I've had the same uniforms for
more than sever years, I pay for my own shoes, phone calls,
and a co-pay for medical attention. I say this not in
lamentation, but for factual accuracy.

People who've never been exposed to prison are often under
the impression that everything in here i provided at the tax
payers expense, this could not be further from the truth.
Prisoners and our families carry a huge financial burden, some
would say "Good" but to those individuals I would ask how
much of a debt to society does one owe? There comes a time
when society has to realize that the United States criminal
justice system as it is today is not and does not work in
their best interest.

There are large corporate interests who derive enormous
consistent profits from the mass incarceration industry. For a
country that prides itself for being a defender of human
rights, this is a glaring failure here at home. In support of
International Human Rights Day, I wanted to inform the public
from the prospective of a prisoner on the inside, about
systematic abuse of human rights that is mass incarceration,
this is the direct result of the "War on Drugs" that the United
States has declared on its own citizens. The human cost of
what I bare witness to everyday is incalculable, the
equivalent of thousands of years, billions of wasted
dollars, and the destruction of families and communities. All
for the continuing profits of government contractors. I want
to say that as long as the world turns a blind eye, the
injustice of the "War on Drugs" and mandatory minimum sentencing
will continue.

Thank You, I look forward to your comments:
Opollo