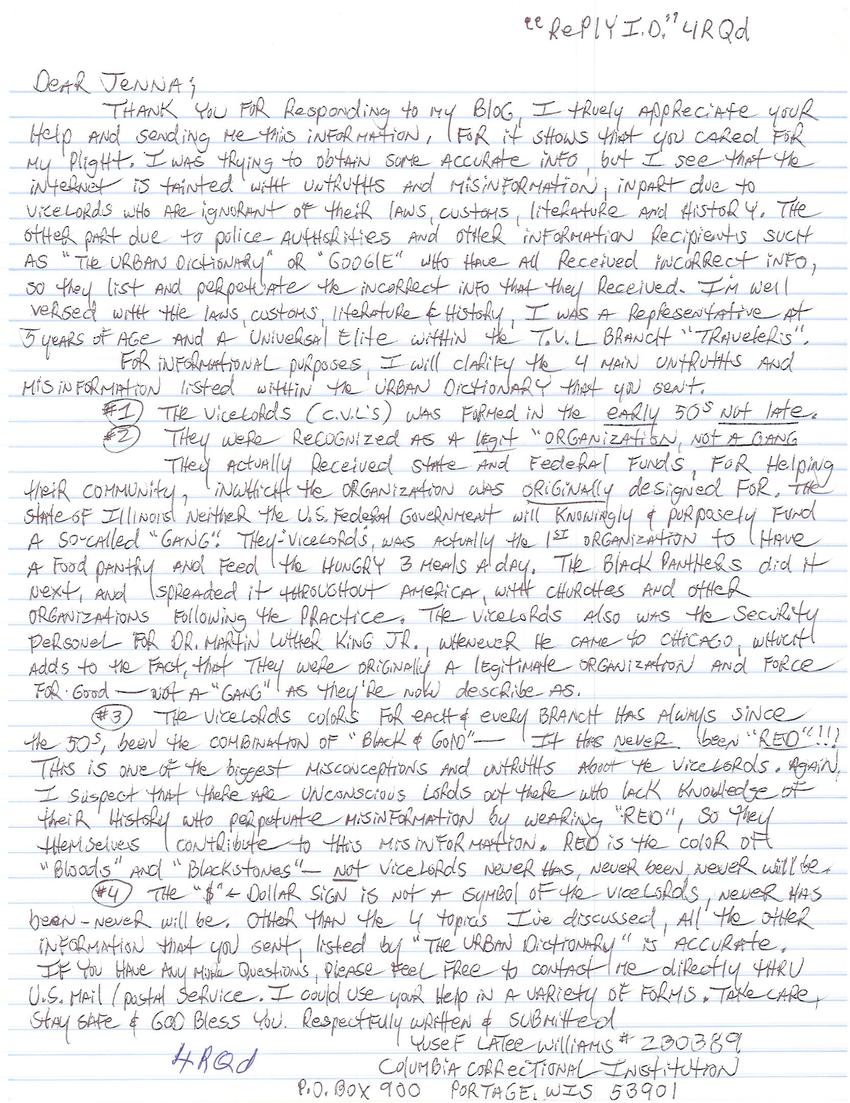 Dear Jenna,
Thank you for responding to my blog post. I truly appreciate your help and sending me this information, for it shows that you cared for my plight. I was trying to obtain some accurate info, but I see that the internet is tainted with untruths and misinformation, in part due to Vice Lords who are ignorant of their laws, customs, literature, and history. The other part is due to police authorities and other information recipients such as the Urban Dictionary or Google who have all received incorrect info, so they list and perpetuate the incorrect info that they received.

I'm well versed with the laws, customs, literature and history. I was a representative at five years of age, and universal elite within the TVL branch Travelers.

For informational purposes, I will clarify the four main untruths and misinformation listed within the Urban Dictionary that you sent.

2. They were recognized as a legit organization, not a gang. They actually received state and federal funds for helping their community, in which the organization was originally designed for. The state of Illinois neither the U.S. federal government will knowingly and purposely fund "a so-called gang."

They Vice Lords was actually the first organization to have a food pantry and feed the hungry three meals a day. The Black Panthers did it next and spread it throughout America, with churches and other organizations following the practice. The Vice Lords also were the security personnel for Dr. Martin Luther King Jr. whenever he came to Chicago, which adds to the fact that they were originally a legitimate organization and force for good. Not a "gang" as they're not described as.

3. The Vice Lords' colors for each and every branch has always, since the '50s, been the combination of black and guns. It has never been red!

This is one of the biggest misconceptions and untruths about ye Vice Lords. Again I suspect that there are unconscious lords out there into lack of knowledge of their history who perpetuate misinformation by wearing red. So they themselves contribute to this misinformation. Red is the color of Bloods and Blackstones—not Vice Lords. Never has, never ever never will be.

4. The $ is not a symbol of the Vice Lords, never has been. Never will be. Other than the four topics I've discussed, all the other information that you sent, listed by the Urban Dictionary is accurate.

If you have questions, please feel free to contact me directly through U.S. mail/postal service. I could use your help in a variety of forms. Take care, stay safe, and God bless you.