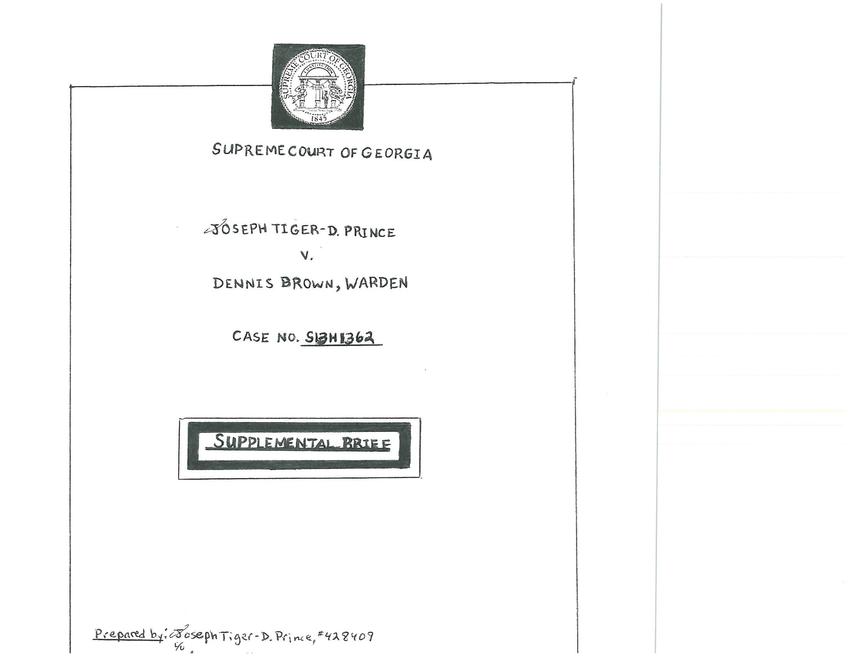 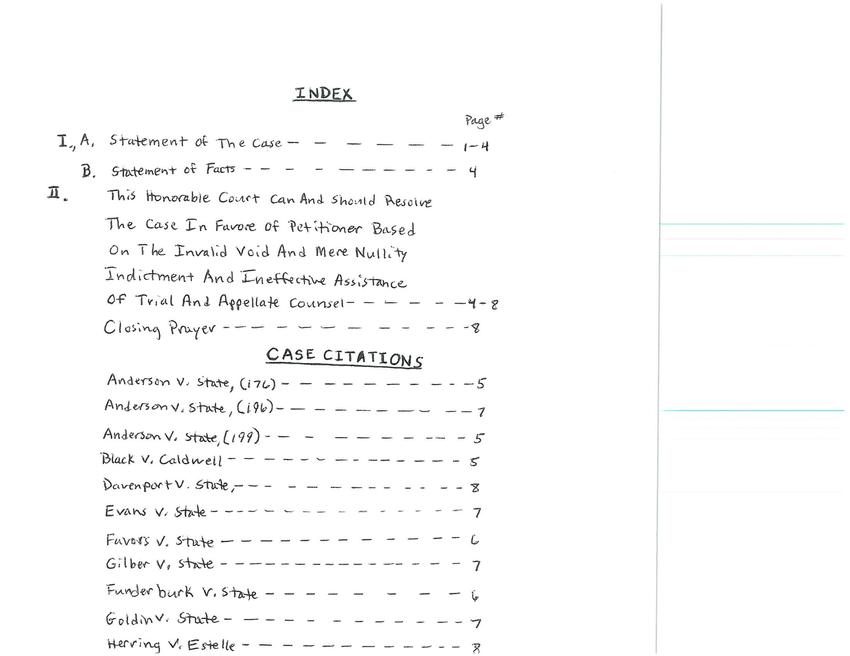 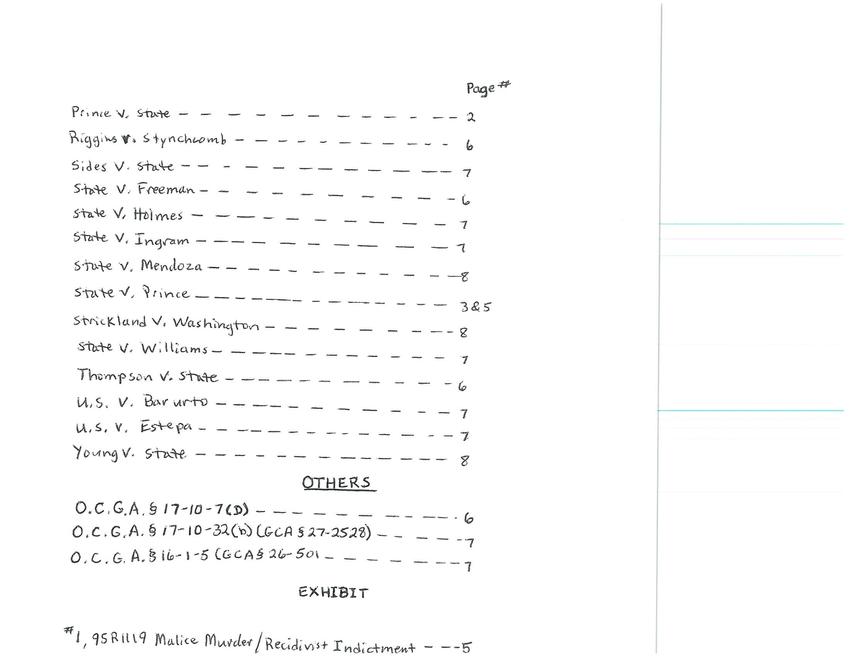 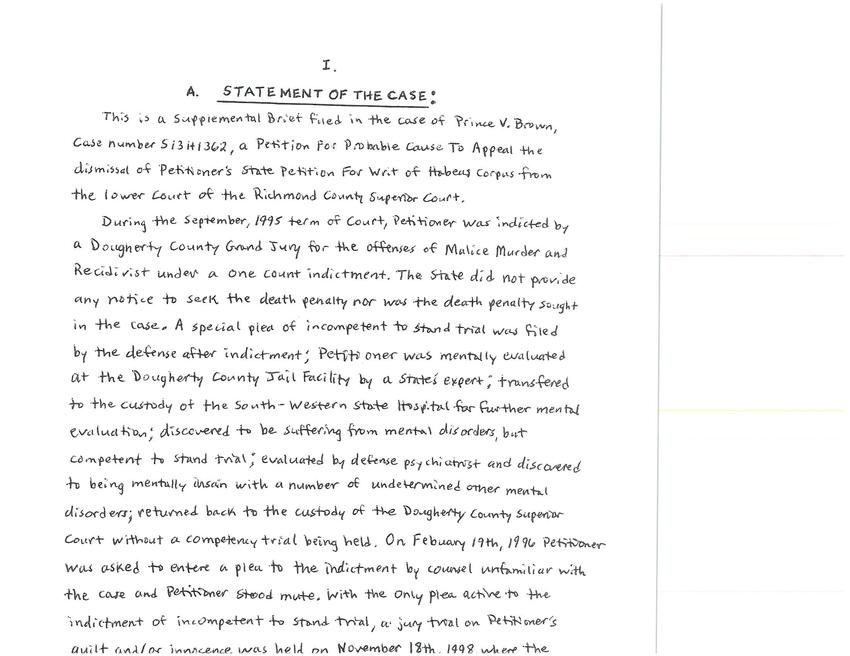 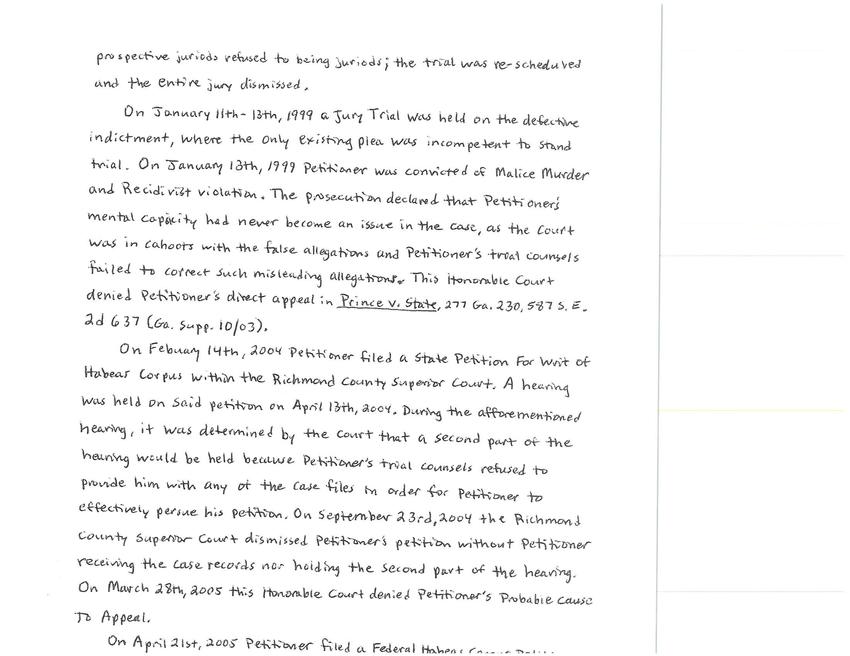 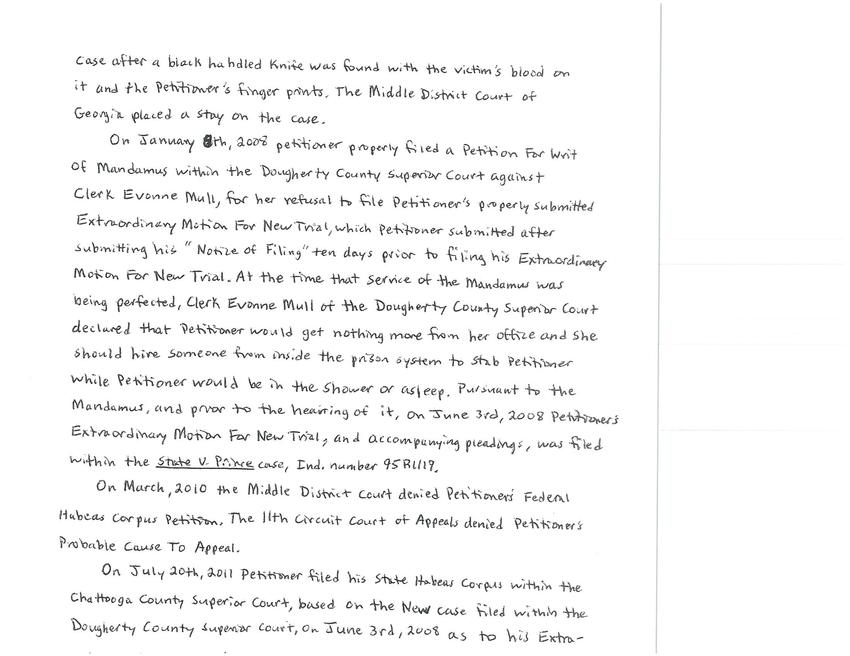 II This Honourable Court Can and Should Resolve The Case in Favour of the Petitioner Based on the Invalid, Void, and Mere Nullity Indictment and Ineffective Assistance of Trial and Appellate Counsel

STATEMENT OF THE CASE:

This is a supplemental brief filed in the case of Prince v. Brown, case number 51341362, a petition for probable cause to appeal the dismissal of Petitioner's State Petition for Writ of Habeus Corpus from the lower court of the Richmond County Superior Court.

During the September, 1995 term of Court, Petitioner was indicted by a Dougherty County Grand Jury for the offences of Malice Murder and Recidivist under a one count indictment. The State did not provide any notice to seek the death penalty not was the death penalty sought in the case. A special plea of incompetent to stand trial was filed byy the defense after indictment; Petitoner was mentally evaluated at the Dougherty County Jail Facility by a State's expert; transferred to the custody of the South-Western State Hospital for further mental evaluation; discovered to be suffering from mental disorders, but competent to stand trial; evaluated by defense psychiatrist and discovered to being mentally insane with a number of undetermined other mental disorders; returned back to the custody of the Dougherty County Superior Court without a competency trial being held. On February 19th, 1996 Petitioner was asked to enter a plea to the indictment by counsel unfamiliar with the case and Petitioner stood mute. With the only plea active to the indictment of incompetent to stan dtrial, a jury trial on Petitioner's guilt and/or innocence was held on November 18th, 1998, where the prospective juroids refused to being juroids; the trial was re-scheduled and the entire jury dismissed.

On January 11th-13th, 1999 a Jury Trial was held on the defective indictment, where the only existing plea was incompetent to stand trial. On January 13th, 1999 Petitioner was convicted of Malice Murder and Recidivist violation. The prosecution declared that Petitioner's mental capacity had never become an issue in the case, as the court was in cahoots with the false allegations and Petitioner's trial counsels failed to correct such misleading allegations. This itonorable Court denied Petitioner's direct appeal in Prince v. State, 277 Ga. 230.5875.E.2d637 (Ga. Supp. 10/03

On February 14th, 2004, Petitioner filed a State Petition for writ of Habeus Corpus within the Richmond County Superior Court. A hearing was held on said petition on April 13th, 2004. During the aforementioned hearing, it was determind by the court that a second part of the hearing would be held because Petitioner's trial counsels refused to provide him with any of the case files in order for Petitioner to effectively persue his petition. On September 23rd, 2004 the Richmond County Superior Court dismissed petitioner's petition without Petitioner receiving the case records nor holding the second part of the hearing. On March 28th, 2005, this Honorable Court denied Petitioner's Probable Cause to Appeal.

On April 21st, 2005, Petitioner filed a Federal Habeus Corpus [illegible] case after a black handled knife was found with the victim's blood on it and the Petitioner's finger prints. The Middle District Court of Georgia placed a stay on the case.

On January 8th, 2008 petitioner properly filed a Petition for Write of Mandamus within the Dougherty County Superuor Court against Clerk Evonne Mull, for her refusal to file Petitioner's properly submitted Extraordinary Motion for New Trial, which Petitioner submitted after submitting his 'Notice of Filing' ten days prior to filing his Extraordinary Motion for New Trial. At the time that service of the Mandamus was being performed, Clerk Evonne Mull at the Dougherty County Superior Court declared that Petitioner would get nothing more from her office and she should hire someone from inside the prison system to stab Petitioner while Petitioner would be in the shower or asleep. Pursuiant to the Mandamus, and prior to the hearing of it, on June 3rd 2008, Petitioner's Extraordinary Motion for New Trial and accompanying pleadings, was filed within the State v Prince case, Ind. number 95R1119.

On March 7th, 2013, or about, the Richmond County Superior Court erroneously dismissed Petitioner's petition, without a hearing as an unpermissable successive petition.

On or about April 10th, 2013, Petitioner filed his "Petition for Probable Cause to Appeal within this Honorable Court", simultaneously filing a Notice of Appeal within the Richmond County Superior Court.

This is a case deriving from a new case filed within the Dougherty County Superior Court on June 3rd, 2008, as an Extraordinary Motion for New Trial. By opperation of law, said motion was admitted to by Respondents by their none responses to the allegational facts within the pleadings, but failed to be enforced by the sentencing court due to the sentencing court committing malicious error by failing to bring the case into actual existance.

In addition, the facts presented within the Extraordinary Motion for New Trial, not the recent July 20th, 2011 State Habeus Corpis could not, effectively, have been presented pursuant to Petitioner being denied the case files. The Petitioner's [illegible].

THE CASE IN FAVOUR OF PETITIONER BASED ON THE INVALID VOID AND MERE NULLITY INDICTMENT AND INEFECTIVE ASSISTANCE OF TRIAL AND APPELLATE COUNSELS:

One of the valid grounds that was ripe for ajudication in the lower courts were ground six of the Petition for Writ of Habeus Corpus (see "Motion for Leave of Court to File Expanded Document and Final Amendment to Writ of Habeus Corpus", filed and granded to be filed by said filing as Dockett #34 within the Chattooga County Superior Court. Id. @ pg. SoF 19, Lines 21-28).

In order for a criminal indictment to be valued, an indictment must: a) show the accused what to prepare a defense against: (b) identify the offences so that he is tried for the same charges that were brought before the grand jury; (c) protect somewhat against double jeopardy; and (d) give the court the means to accept or reject the verdict, pronounce judgement, and pass sentence. Thompson V. State, 542 so. 2d 1291 (Ala. Crime. App. 1988); Lankford V Idahoe, 500 US. 110.111 S. ct. 1723, 114, 114, LEd 1d 173 (1991). The indictment in the case at bar (see Ex. #1) was predicated upon matters and facts illegally presented to the grand jury in violation of Petitioner's due process rights and the provisions of OCGA § 17-10-7(D), which states

Any sentence of incarceration under (a) and (c) is not parole eligable. Any jail sentence, EXCEPT MURDER..."

I, Joseph Tiger-D Prince, hereby certify that I have, this day, served a true copy of the enclosed "supplemental brief" upon Senior Assistant Attorney General Paula Kristian Smith @ the Department of Law, 40 Capitol Square, SW Atlanta, Georgia, 30335; By placing said document in a properly addressed evelope adressed, [?] and placing proper postage thereon; and placing said envelope in the US Postal Service mail for proper delivery thereon this 21 day of April, 2014