Defund the Police? Yes, and More! 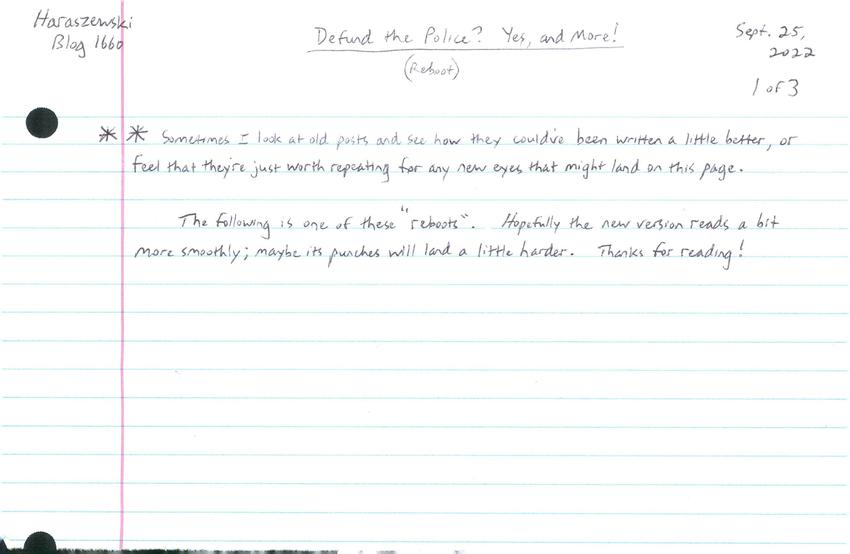 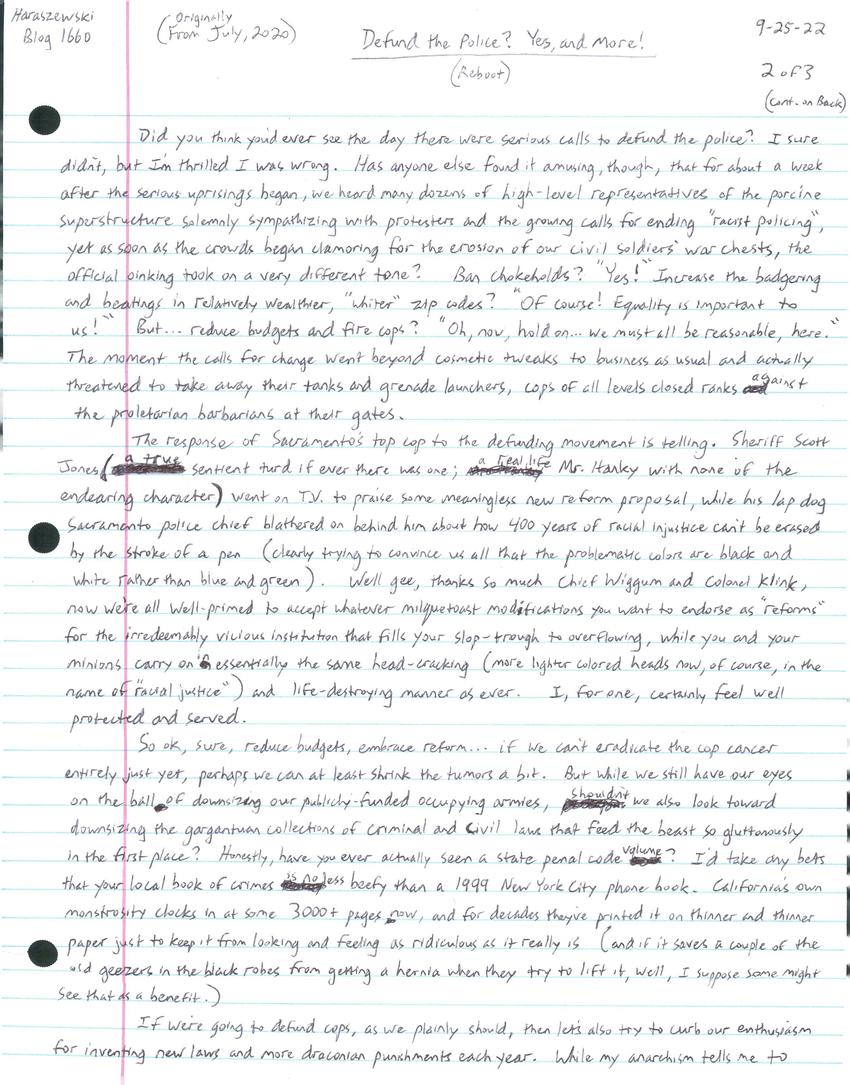 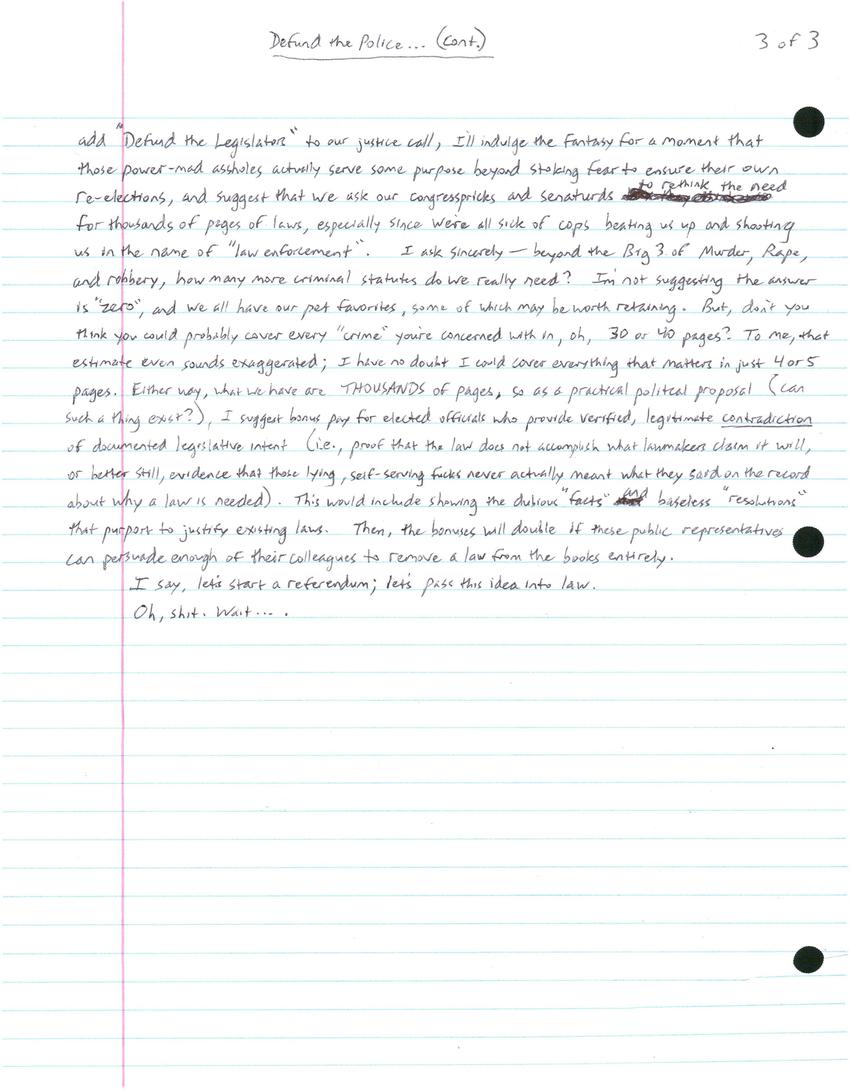 **Sometimes I look at old posts and see how they could've been written a little better, or feel that they're just worth repeating for any new eyes that might land on this page.

The following is one of these "reboots". Hopefully the new version reads a bit more smoothly; maybe its punches will land a little harder. Thanks for reading!

Did you think you'd ever see the day there were serious calls to defund the police? I sure didn't but I'm thrilled I was wrong. Has anyone else found it amusing, though, that for about a week after the serious uprisings began, we heard many dozens of high-level representatives of the porcine superstructure solemnly sympathizing with protestors and the growing calls for ending "racist policing", yet as soon as the crowds began clamoring for the erosion of our civil soldiers' war chests, the official oinking took on a very different tone? Ban Chokeholds? "Yes!" Increase the badgering and beatings in relatively wealthier, "whiter" zip codes? "OF Course! Equality is important to us!" But...reduce budgets and fire cops? "Oh, now, hold on...we must all be reasonable, here." the moment the calls for change went beyond cosmetic tweaks to business as usual and actually threatened to take away their tanks and grenade launchers, cops of all levels closed ranks against the proletarian barbarians at their gates.
The response of Sacramento's top cop to the defunding movement is telling. Sheriff Scott Jones (a true sentient turd if there ever was one; a real-life Mr. Hanky with none of the endearing character) went on T.V. to praise some meaningless new reform proposal, while his lap dog Sacramento police chief blathered on behind him about how 400 years of racial injustice can't be erased by the stroke of a pen (clearly trying to convince us all that the problematic colors are black and white rather than blue and green). Well gee, thanks so much Chief Wiggum and Colonel Klink, now we're all well-primed to accept whatever milquetoast modifications you want to endorse as "reforms" for the irredeemably vicious institution that fills your slop-trough to overflowing, while you and your minions carry on essentially the same head-cranking (more lighter colored heads now, of course, in the name of "racial justice") and life-destroying manner as ever. I, for one, certainly feel well protected and served.
So ok, sure, reduce budgets, embrace reform... if we can't eradicate the cop cancer entirely just yet, perhaps we can at least shrink the tumors a bit. But while we still have our eyes on the ball of downsizing our publicly-funded occupying armies, shouldn't we also look toward downsizing the gargantuan collections of criminal and Civil laws that feed the beast so gluttonously in the first place? Honestly, have you ever actually seen a state penal code volume? I'd take any bets that your local book of crimes is no less beefy than a 1999 New York City phone book. California's own monstrosity clocks in at some 3000+ pages now, and for decades they've printed it on thinner and thinner paper just to keep it from looking and feeling as ridiculous as it really is (and if it saves a couple of the old geezers in the black robes from getting a hernia when they try to lift it, well, I suppose some might see that as a benefit.)
If we're going to defund cops, as we plainly should, then let's also try to curb our enthusiasm for inventing new laws and more draconian punishments each year. While my anarchism tells me to

add "Defund the Legislators" to our justice call, I'll indulge the Fantasy for a moment that those power-mod assholes actually serve some purpose beyond stoking fear to ensure their own re-elections, and suggest that we ask our congresspricks and senaturds to rethink the need for thousands of pages of laws, especially since we're all sick of cops beating us up and shouting us in the name of "law enforcement". I ask sincerely--beyond the Big 3 of Murder, Rape, and robbery, how many more criminal satutes do we really need? I'm not suggesting the answer is "zero", and we all have our pet favorites, some of which may be worth retaining. But, don't you think you could probably cover every "crime" you're concerned with in, oh, 30 or 40 pages? To me, that estimate even sounds exaggerated; I have no doubt I could cover everything that matters in just 4 or 5 pages. Either way, what we have are THOUSANDS of pages, so as a practical political proposal (can such a thing exist?), I suggest bonus pay for elected officials who provide verified, legitimate [underlined]contradiction[underlined] of documented legislative intent (i.e., proof that the law does not accomplish what lawmakers claim it will, or better still, evidence that those lying, self-serving fucks never actually meant what they said on the record about why a law is needed). This would include showing the dubious "facts" and baseless "resolutions" that purport or justify existing laws. Then, the bonuses will double if these public representatives can persuade enough of their colleagues to remove a law from the books entirely.
I say, let's start a referendum; let's pass this idea into law.
Oh, shit. Wait... .

I finished your transcription, and I have to say I thoroughly enjoyed your insight and the nature of your writing. You've given me much to ponder on in my own endeavors and will keep you very much in mind. Please do keep writing.
I read your post and appreciate the perspective! I've thought a lot about specific behaviors being decriminalized (drug use, sex work, etc) but not about sheer numbers of laws. I feel like cops and prosecutors can kind of do whatever they want regardless of what is or isn't illegal. Like, they were arresting mothers for using drugs despite their being no laws against it but they're basically never doing anything about bosses stealing wages or upper class white guys beating their wives. Strong agree that in addition to defunding the police, it makes a lot of sense to fully rethink what requires "punishment", also lol to the last line.