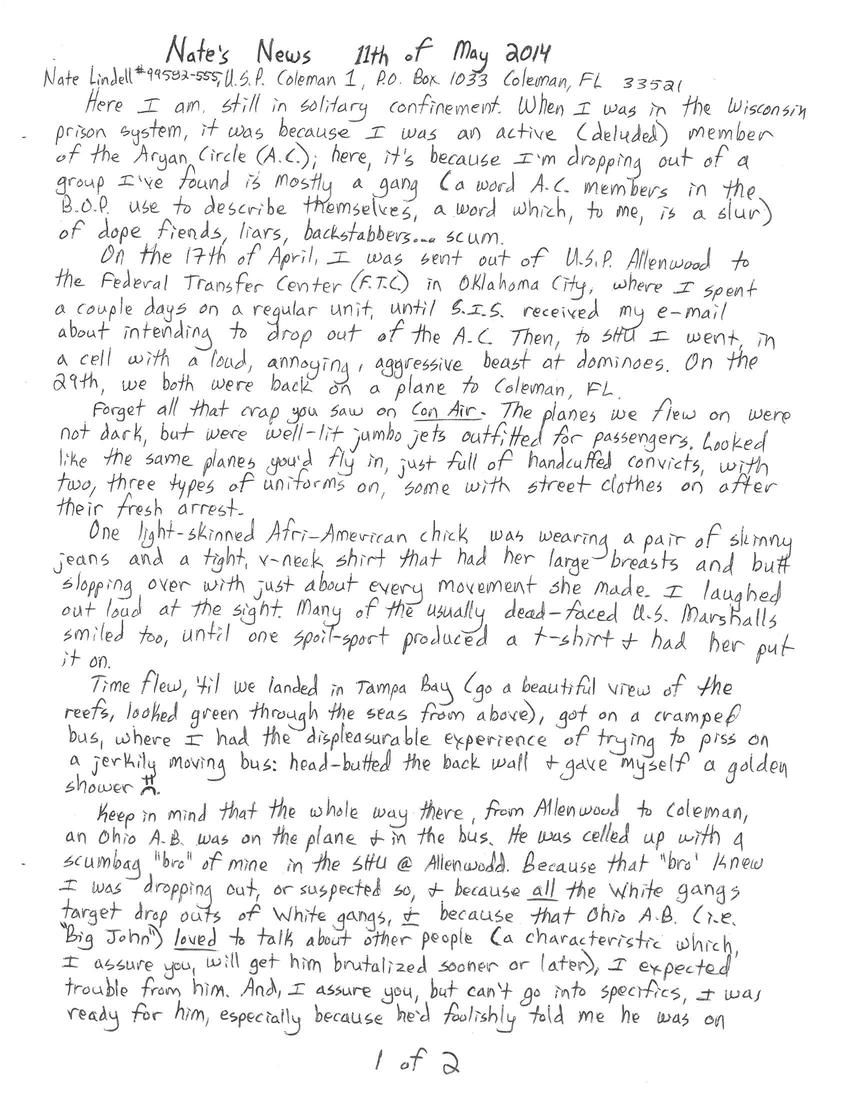 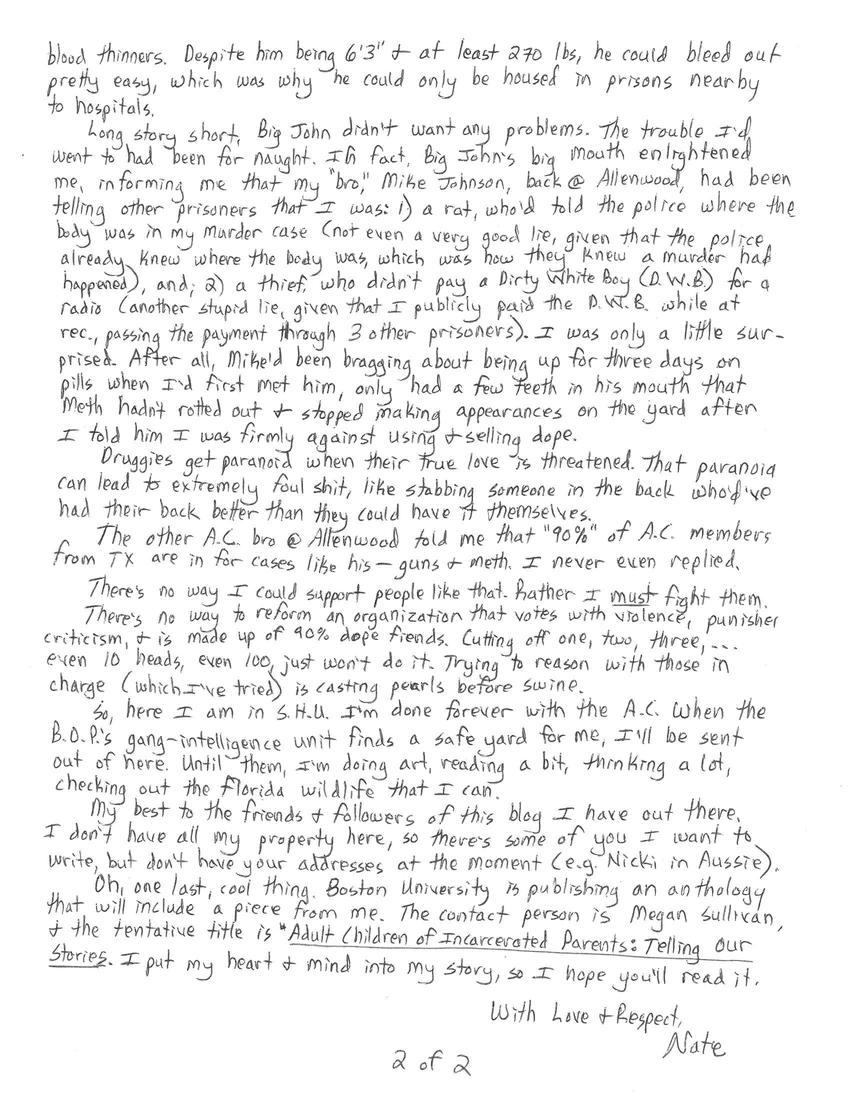 Nate's News 11th of May 2014
Nate Lindell #99582-555, U.S.P. Coleman 1, P.O. Box 1033 Coleman, FL 33521
Here I am. Still in solitary confinement. When I was in the Wisconsin prison system, it was because I was an active (deluded) member of the Aryan Circle (A.C.); here, it's because I'm dropping out of a group I've found is mostly a gang (a word A.C. members in the B.O.P. use to describe themselves, a word which, to me, is a slur) of dope fiends, liars, backstabbers... scum.
On the 17th of April, I was sent out of U.S.P. Allenwood to the Federal Transfer Center (F.T.C.) in Oklahoma City, where I spent a couple days on a regular unit, until S.I.S. received my email about intending to drop out of the A.C. Then, to SHU I went, in a cell with a loud, annoying, aggressive beast at dominoes. On the 29th, we both were back on a plane to Coleman, FL.
Forget all that crap you saw on Con Air. The planes we flew on were not dark but were well-lit jumbo jets outfitted for passengers. Looked like the same planes you'd fly in, just full of handcuffed convicts, with two, three types of uniforms on, some with street clothes on after their fresh arrest.
One light-skinned Afri-American chick was wearing a pair of skinny jeans and a tight, v-neck shirt that had her large breasts and butt slopping over with just about every movement she made. I laughed out loud at the sight. Many of the usually dead-faced U.S. Marshalls smiled too, until one spoil-sport produced a t-shirt 7 had her put it on.
Time flew, 'til we landed in Tampa Bay (go a beautiful view of the reefs, looked green through the seas from above), got on a cramped bus, where I had the displeasure experience of trying to piss on a jerkily moving bus: head-butted the back wall & gave myself a golden shower =(.
Keep in mind that the whole way there, from Allenwood to Coleman, an Ohio A.B. was on the plane & in the bus. He was celled up with a scumbag, "bro" of mine in the SHU @ Allenwood. Because that "bro" knew I was dropping out, or suspected so, & because all the White gangs target drop outs of Whtei gangs, & because that Ohio A.B. (i.e. "Big John") loved to talk about other people (a characteristic which, I assure you, will get him brutalized sooner or later), I expected trouble form him. And, I assure you, but can't go into specifics, I was ready for him, especially because he'd foolishly told me he was on blood thinners. Despite him being 6'3" & at least 270 lbs, he could bleed out pretty easy, which was why he could only be housed in prisons nearby to hospitals.
Long story short, Big John didn't want any problems. The trouble I'd went to had been for naught. In fact, Big John's big mouth enlightened me, informing me that my "bro," Mike Johnson, back @ Allenwood, had been telling other prisoners that I was: 1) a rat who'd told the police where the body was in my murder case (not even a very good lie, given that the police already knew where the body was, which was how they knew a murder had happened), and; 2) a thief, who didn't pay a Dirty Whtie Boy (D.W.B.) for a radio (another stupid lie given that I publicly paid the D.W.B. while at rec., passing the payment through 3 other prisoners). I was only a little surprised. After all, Mike'd been bragging about being up for three days on pills when I'd first met him, only had a few teeth in his mouth that meth hadn't rotted out & stopped making appearances on the yard after I told him I was firmly against using & selling dope.
Druggies get paranoid when their true love is threatened. That paranoia can lead to extremely foul shit, like stabbing someone in the back who'd've had their back better than they could have it themselves.
The other A.C. bro @ Allenwood told me that "90%" of A.C. members form TX are in for cases like his - guns & meth. I never even replied.
There's no way I could support people like that. Rather I must fight them.
There's no way to reform an organization that votes with violence, punishment, criticism, & is made up of 90% dope fiends. Cutting off one, two, three,... even 10 heads, even 100 just won't do it. Trying to reason with those in charge (which I've tried) is casting pearls before swine.
So, here I am in S.H.U. I'm done forever with the A.C. when the B.O.P.'s gang-intelligence unit finds a safe yard for me, I'll be sent out of here. Until then, I'm doing art, reading a bit, thinking a lot, checking out the Florida wildlife that I can.
My best to the friends & followers of this blog I have out there. I don't have all my property here, so there's some of you I want to write, but don't have your addresses at the moment (e.g. Nicki in Aussie).
Oh, one last, cool thing. Boston University is publishing an anthology that will include a piece from me. The contact person is Megan Sullivan, & the tentative title is "Adult Children of Incarcerated Parents: Telling Our Stories. I put my heart & mind into my story, so I hope you'll read it.
With Love & Respect,
Nate

Hi Nathaniel. I have read your story, your blog, and all of your poetry on prison foundation. I also saw you on write a prisoner.You are quite a fascinating person. I think it would be something to know you. Some of your poems broke my heart. I can relate to you and I totally empathize. We actually have a lot in common, similar interests and likes. I would like to correspond with you if you don't mind. Honestly, I really admire your strength. You have a lot of desirable qualities as a person, too. La facon dont vous les avez belle les levres et les yeux. Et je suis coquine, trop! hahaha With Much Love, Carly
(scanned reply – view as blog post)
uploaded July 28, 2014.  Original (PDF) 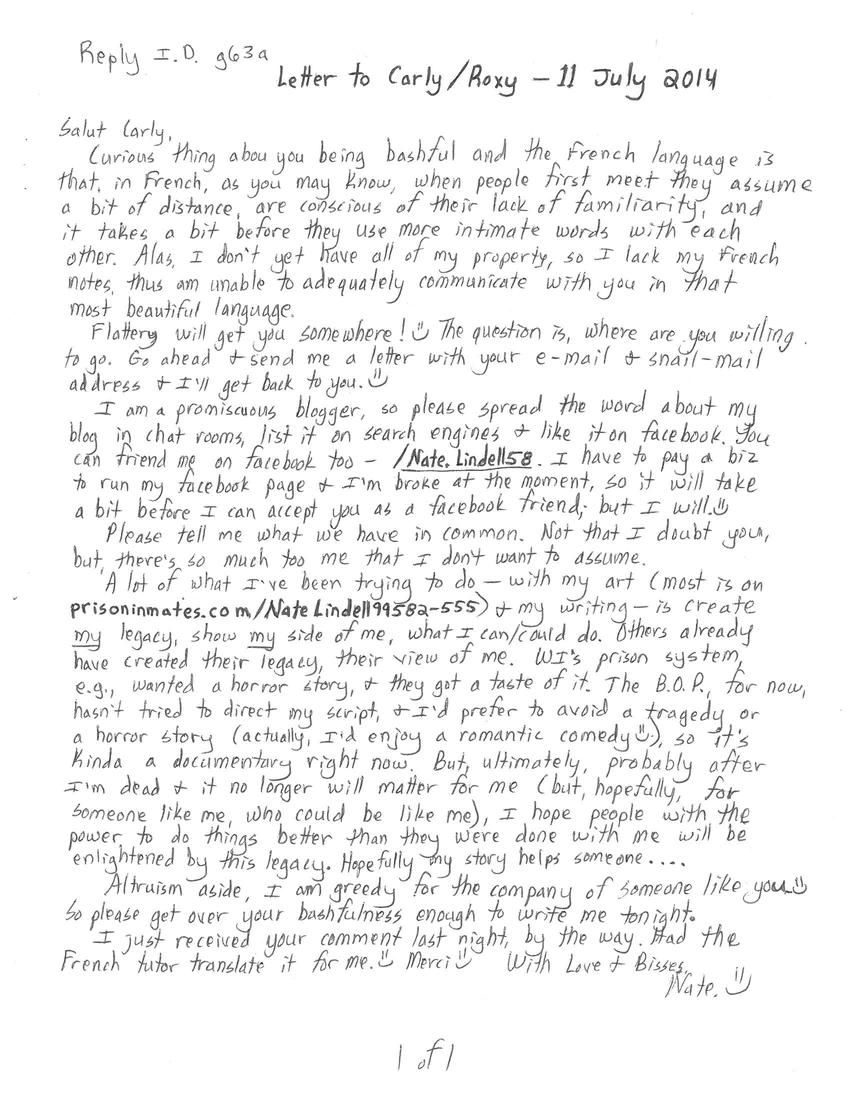