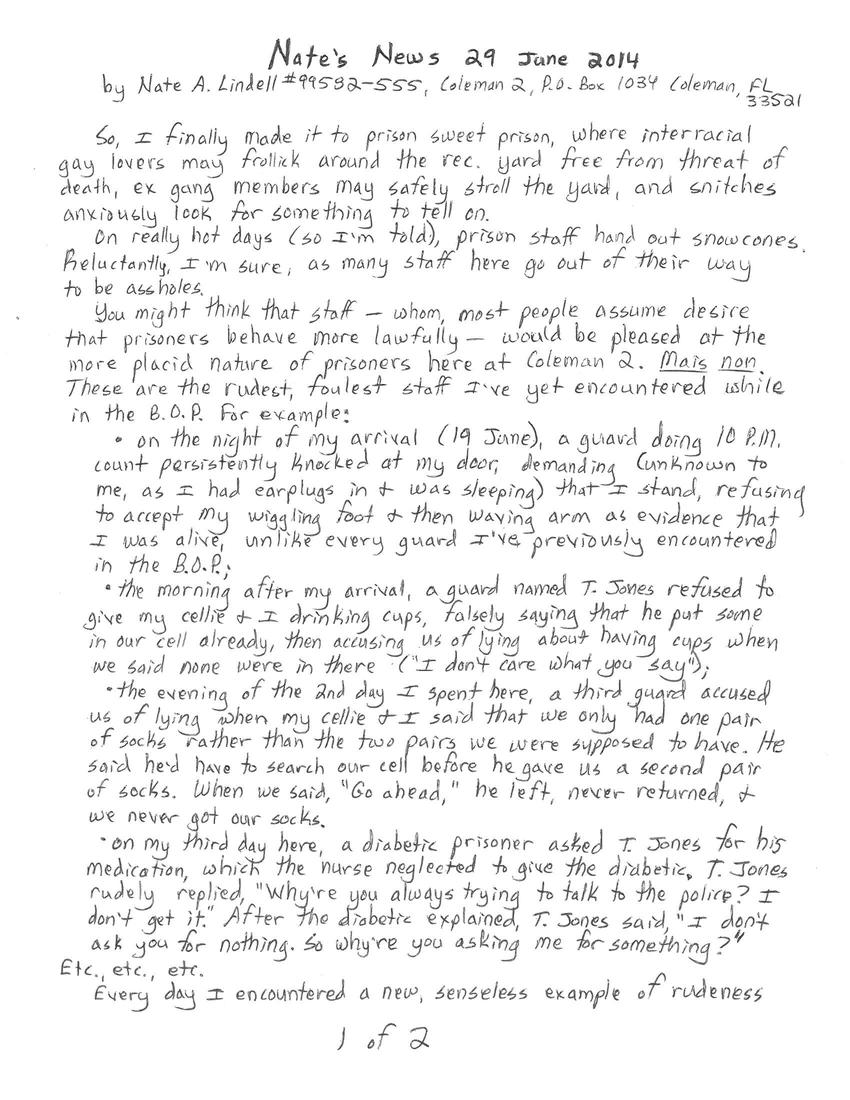 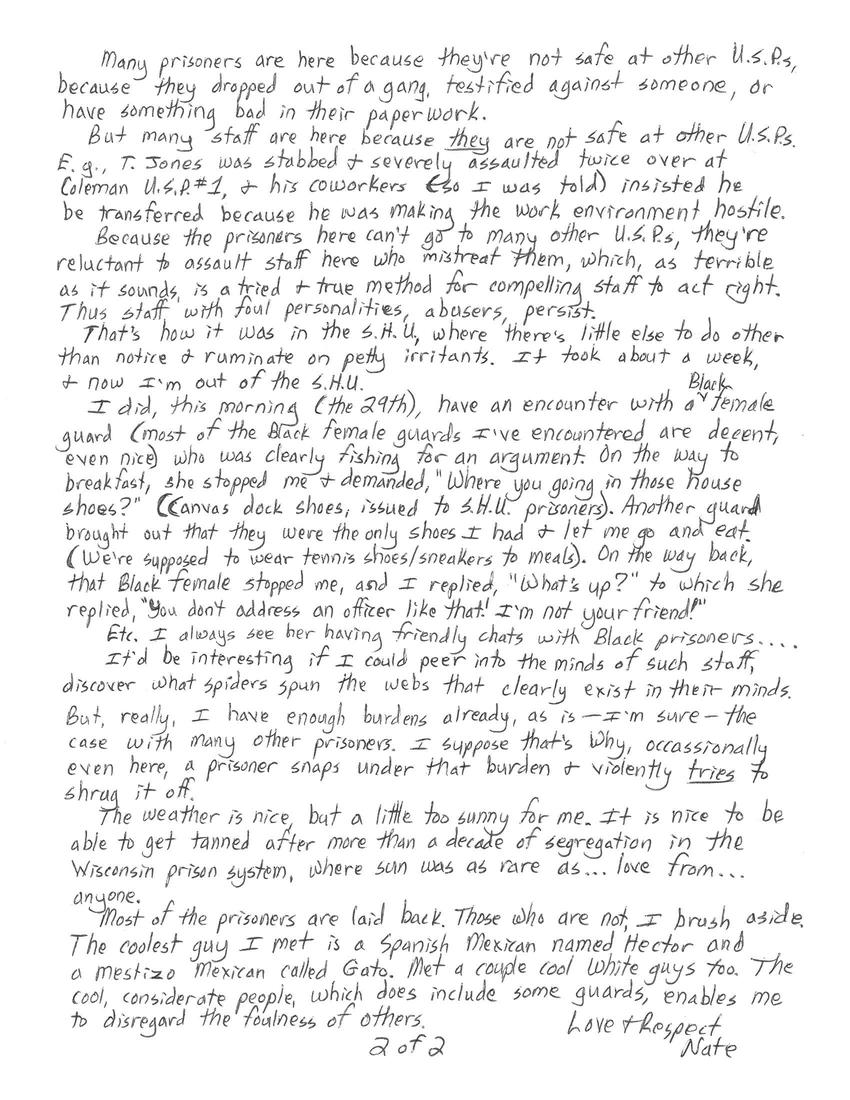 So, I finally made it to prison sweet prison, where interracial gay lovers may frolic around the rec. yard free from threat of death, ex gang members may safely stroll the yard, and snitches anxiously look for something to tell on.

On really hot days (so I'm told), prison staff hand out snowcones. Reluctantly, I'm sure, as many staff here go out of their way to be assholes.

You might think that staff - whom, most people assume that prisoners behave more lawfully - would be pleased at the more placid nature of prisoners here at Coleman 2. Mais non. These are the rudest, foulest staff I've yet encountered while in the B.O.P. For example:
- On the night of arrival (19 June), a guard doing 10p.m. count persistently knocked at my door, demanding (unknown to me, as I had earplugs in and was sleeping) that I stand, refusing to accept my wiggling foot and then waving arm as evidence that I was alive, unlike every guard I've previously encountered in the B.O.P.
- The morning after my arrival, a guard named T. Jones refused to give my cellie and I drinking cups, falsely saying that he put some in our cell already, then accusing us of lying about having cups when we said none were in there "(I don't care what you say");
-The evening of the 2nd day I spent here, a third guard accused us of lying when my cellie and I said that we only had one pair of socks rather than the two pairs we were supposed to have. He said he's have to search our cell before he gave us a second pair of socks. When we said, "Go ahead", he left, never returned and we never got our socks.
- on my third day here, a diabetic prisoner asked T. Jones for his medication, which the nurse neglected to give the diabetic. T.Jones rudely replied "Why're you always trying to talk to the police? I don't get it". After the diabetic explained, T.Jones said "I don't ask you for nothing. So why're you asking me for something?" Etc., etc., etc.

Every day I encountered a new, senseless example of rudeness. Many prisoners are here because they're not safe at other U.S.Ps, because they dropped out of a gang, testified against someone, or have something bad in their paperwork.

But many staff are here because they are not safe at other U.S.Ps, e.g. T.jones was stabbed and severely assaulted twice over at Coleman U.S.P #1, and his coworkers (so I was told) insisted he be transferred because he was making the work environment hostile. Because the prisoners here can't go to many other U.S.Ps, they're reluctant to assault staff here who mistreat them, which, as terrible as it sounds, is a tried and true method for compelling staff to act right. Thus staff with foul personalities, abusers, persist.

That's how it was in the S.H.U, where there's little else to do other than notice and ruminate on petty irritants. It took about a week, and now I'm out of the S.H>U.

I did, this morning (29th), have an encounter with a Black female guard (most of the Black female guards I've encountered are decent, even nice) who was clearly fishing for an argument. On the way to breakfast, she stopped me and demanded "where you going in those house shoes?" (canvas dock shoes, issued to S.H.U prisoners). Another guard brought out that they were the only shoes I had and let me go and eat. (We're supposed to wear tennis shoes/sneakers to meals). On the way back, that black female stopped me, and I replied, "what's up?" to which she replied, "You don't address an officer like that! I'm not your friend!" etc.

I always see her having friendly chats with Black prisoners... It'd be interesting if I could peer into the minds of such staff, discover what spiders spun the webs that clearly exist in their minds. But really, I have enough burdens already as is -I'm sure - the case with many other prisoners. I suppose that's why, occasionally even here, a prisoner snaps under that burden and violently tries to shrug it off.

The weather is nice, but a little too sunny for me. It is nice to be able to get tanned after more than a decade of segregation in the Wisconsin prison system, where sun was a rare as...love from...anyone.

Most of the prisoners are laid back. Those who are not, I brush aside. The coolest guy I met is a Spanish Mexican named Hector and a mestizo Mexican called Gato. Met a couple cool white guys too. The cool, considerate people, which does include some guards, enables me to disregard the foulness of others.
Love and respect, Nate.

Really interesting to read and hope that the considerate people continue to be a support.
huh..

Oddly- I was writing to someone in prison years ago and I am signed up for this site "write a prisoner.com" that i had long forgotten about they wished me a happy birthday via e-mail which i found slightly creepy haha
I found your profile and thought you would seem cool and then I started reading your blog. I really like it! is there anyother way to send you mail?
Nathan, this is someone you me possibly remember from your past. I grew up on the southside lacrosse with you, it was sad to hear the news about your crime and punishment. I do hope that you have the opportunity in your lifetime to be a free man. We all make mistakes we were young I certainly made my own. I know you might remember Frank Kasson, Jeff Lenser, Shawn Sunday, many of us they grew up on the southside. I guess I ended up here out of morbid curiosity. It's sad to see how prison politics have skewed your world view but that happens. I'm sure I'm not the only person who was shocked when we read the news about the situation that I need you up where you are today. I can imagine living my life for that many years incarcerated as you have. One memory I have of you, well actually two. The first being on the snowy Wisconsin night walking past the juvenile detention center see you to other people bust out the side door during an escape. The other was at Central high school when there was a bomb situation in the toilet stall. I do wish you well and I'm not going to identify myself but I do know you from when you were young we were all grown older, and hopefully one day you'll be able to see the outside. But the outside is not prison and always remember if you do get out you never want to go back.
(scanned reply – view as blog post)
uploaded Nov. 29, 2014.  Original (PDF) 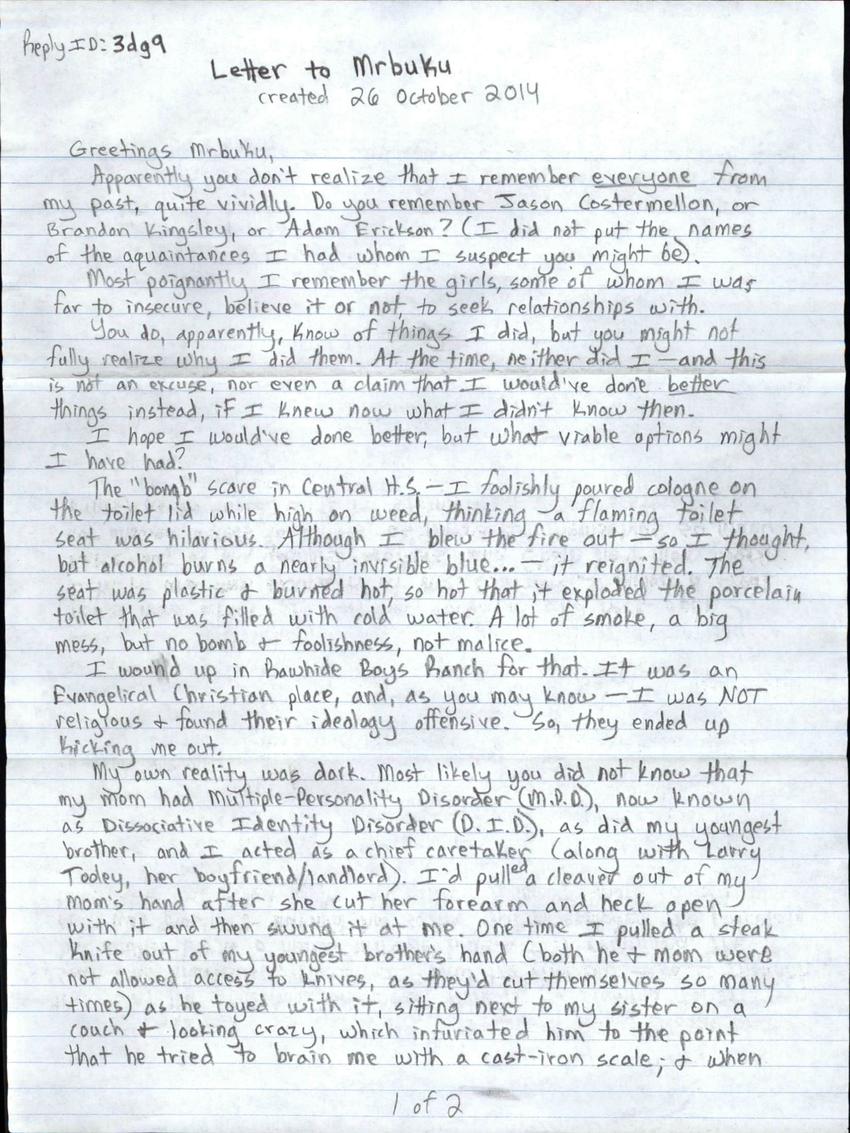 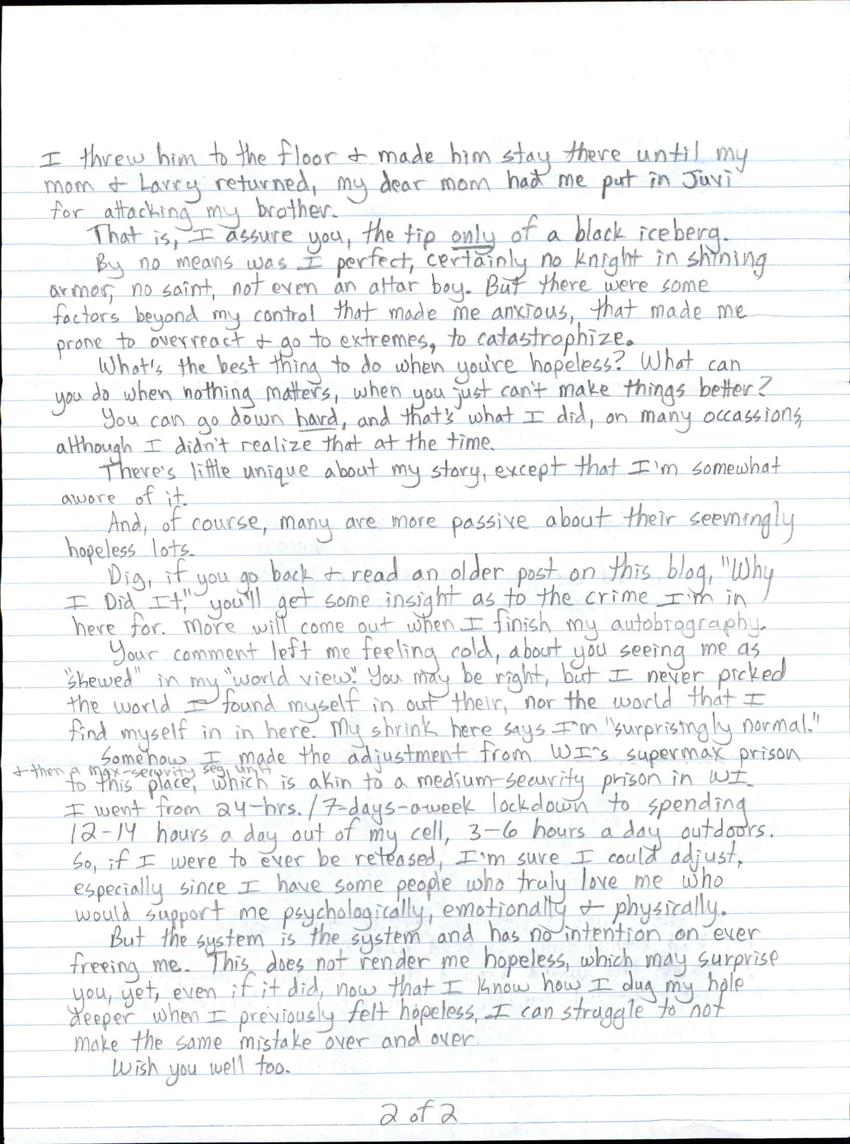