What Goes On In This Prison Called Pulask (Food) 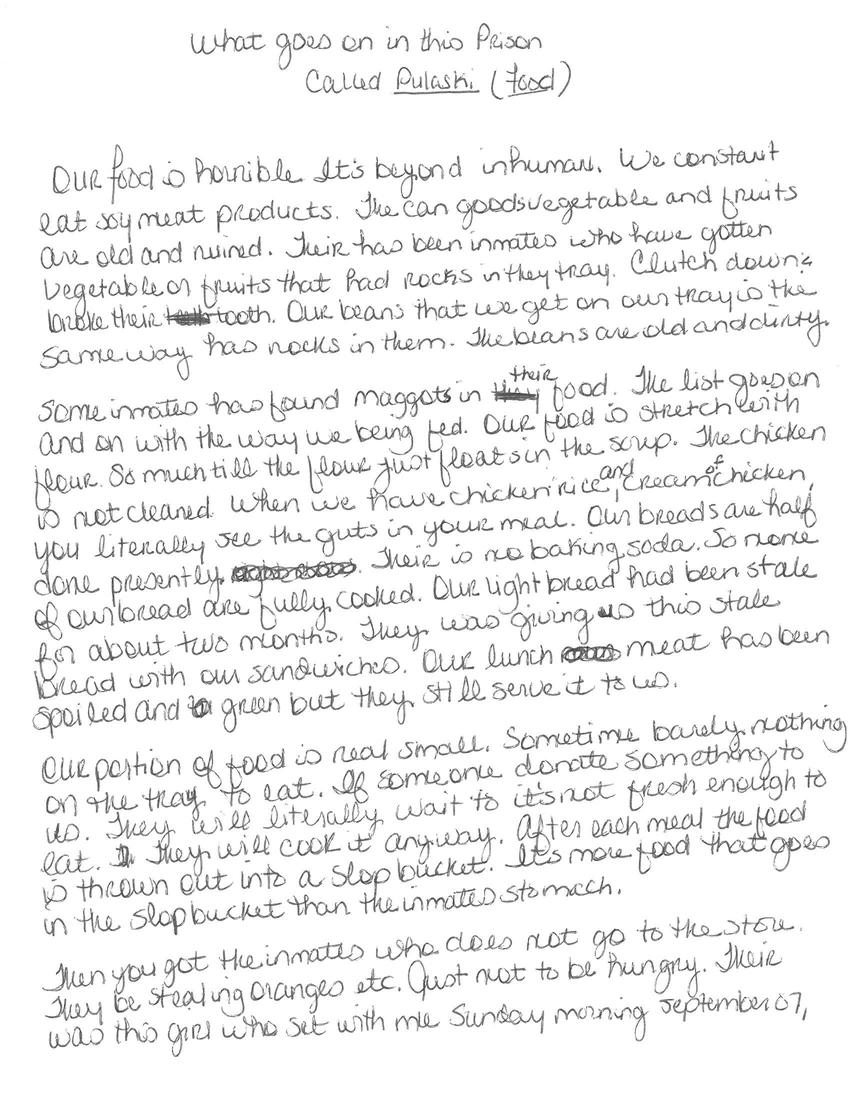 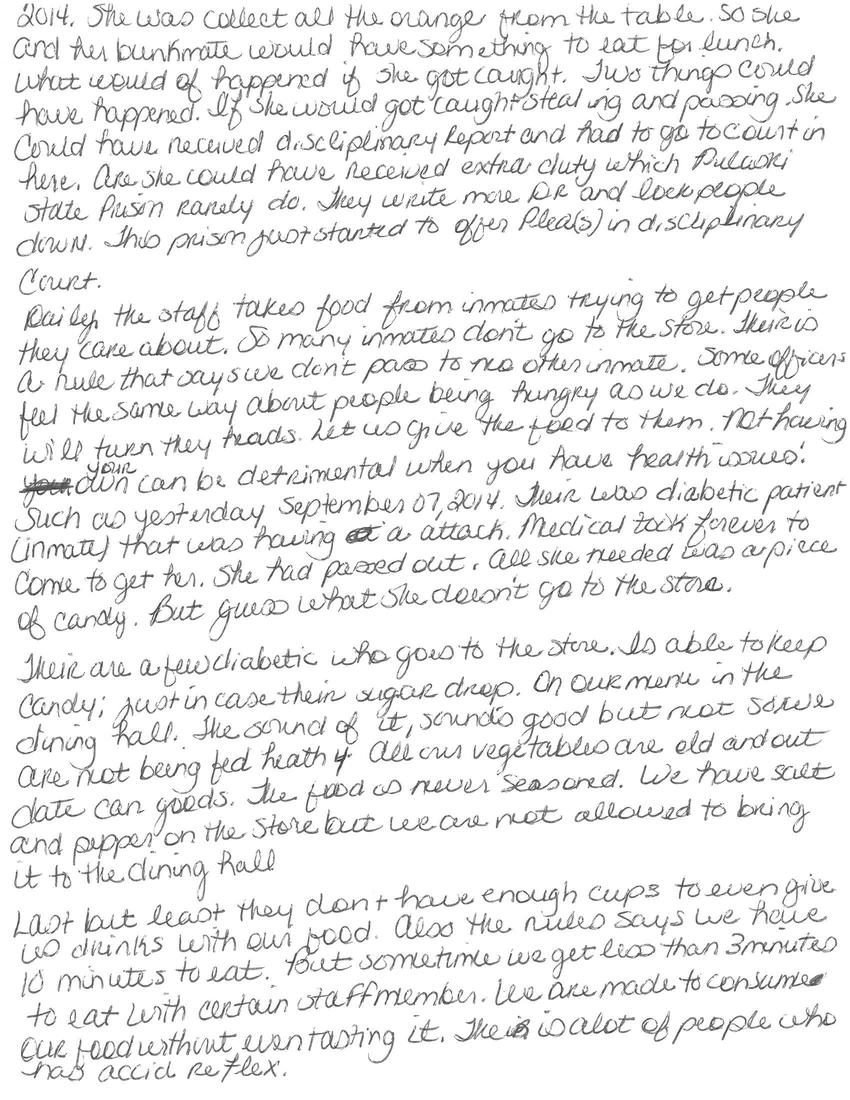 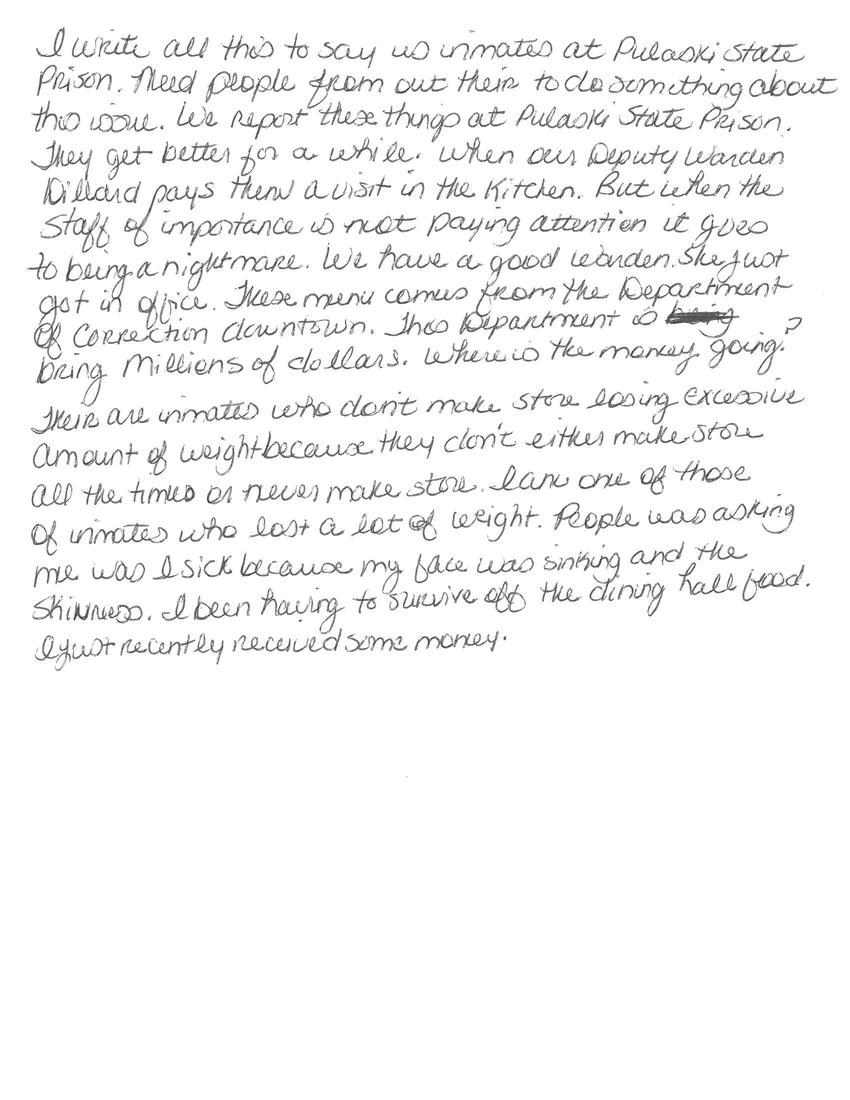 What Goes On in This Prison Called Pulaski (Food)

Our food is horrible, it's beyond inhuman. We constantly eat soy meat products. The can good vegetables and fruits are old and ruined. There has been inmates who have gotten vegetable or fruits that had rocks in their trays. Clutch down and broke their tooth. Our beans that we get on our tray is the same way, has rocks in them. The beans are old and dirty.

Some inmates have found maggots in their food. The list goes on and on with the way we're being fed. Our food is stretched with flour, so much till the flour just floats in the soup. The chicken is not cleaned. When we have chicken, rice and cream of chicken, you literally see the guts in your meal. Our breads are half done presently. There is no baking soda so none of our bread is fully cooked. Our light bread has been stale for about two months. They were giving us this stale bread with our sandwiches. Our lunch meat has been spoiled and green but the still serve it to us.

Our portion of food is real small. Sometimes barely nothing on the tray to eat. If someone donates something to us, they will literally wait until it's not fresh enough to eat. They will cook it anyway. After each meal the food is thrown out into a slop bucket. It's more food that goes in the slop bucket than the inmates stomach.

They you got the inmates who do not go to the store. They be stealing oranges, etc. just not to be hungry. There was this girl who sat with me Sunday morning September 07,2014, she was collecting all the oranges from the tables so she and her bunkmate would have something to eat for lunch. What would happen if she got caught? Two things could have happened if she got caught stealing and passing , she could have received disciplinary report and had to go to court in here. And she could have received extra duty which Pulaski State Prison rarely do. They write more D.R. and lock people down. This prison just started to offer pleas in disciplinary court.

Daily the staff takes food from inmates trying to get people they care about. So many inmates don't go to the store. There is a rule that says we don't pass to no other inmate. Some officers feel the same way about people being hungry as we do. They will turn their heads, let us give the food to them. Not having your own can be detrimental when you have health issues! Such as yesterday, September 07, 2014, there was a diabetic patient (inmate) that was having an attack and medical took forever to come get her. She had passed out, all she needed was a piece of candy. But guess what, she doesn't go to the store.

There are a few diabetic who does to the store, is able to keep candy; just in case their sugar drop on our menu in the dining hall. The sound of it sounds good but not so. We are not being fed healthy! All our vegetables are old and out dated canned goods. The food is never seasoned. We have salt and pepper in the store but we are not allowed to bring it to the dining hall.

Last but not least, they don't have enough cups to even give us drinks with our food. Also the rules say we have 10 minutes to eat but sometimes we get less than 3 minutes to eat with certain staff members. We are made to consume or food without even tasting it. There is a lot of people who have acid reflux.

I write this all to say us inmates at Pulaski State Prison need people from out there to do something about this issue. We report these things at Pulaski State Prison and they get better for a while when our Deputy Warden Dillard pays them a visit in the kitchen. But when the staff of importance is not paying attention it goes to being a nightmare. We have a good Warden , she just got in office. These menus come from the Department of Corrections downtown, this department brings in millions of dollars, where is the money going?

There are inmates who don't make store. losing excessive amounts of weight because they don't either make store all the time or never make store. I am one of those inmates who lost a lot of weight People were asking me if I was sick because my face was sinking and the skinniness. I been having to survive off the dining hall food. I just recently received some money.

This is lack of proper food being provided for these women who are simply human beings serving time for choices they made is an absolute disgrace. Do we really think by depriving people of proper nutrition that they are going to "learn their lesson?" How archaic and ignorant are we as a society? I want to help. If I can coordinate a lunch delivery on saturday to these women, who do I speak to about getting approval? I have resources that I think would be more than willing to help ensure that these women at least get a lunch meal on the weekend. We'll start with that and then see what more we can do about getting better/healthy food to them on a regular basis....come on people.
TK

You cannot just bring food to a prison - it's not a matter of means but of process. All prison food goes though a series of approvals at the state level - and multiple committees right on down to the individual prison (everything must meet certain guidelines).

You're best bet is to start with the GA DOC (since that seems to be where Pulaski is located).

I sympathize with Ms. Johnson about the quality of food. Prison food is often not very tasty (most prisons across the country rely on surplus foods). It leaves a lot to be desired.

I would add, though, that if oranges are being stolen - well, at most prisons, there is a reason WHY they are being taken. Frankly, I'm surprised that they are served at all (most prisons won't serve them because they are taken back to the dorms/cells to make alcohol). It's a huge problem that many prisons solve by just taking all whole fruits off the menu (they will serve canned).

I'm surprised to hear that at Ms. Johnsons prison this is not a problem - that's very exceptional.

Anyway, I'm sure there is a way to donate bulk foods to individual prisons - it will just involve a series of approvals. I'd call the DOC in that state and see what they say. 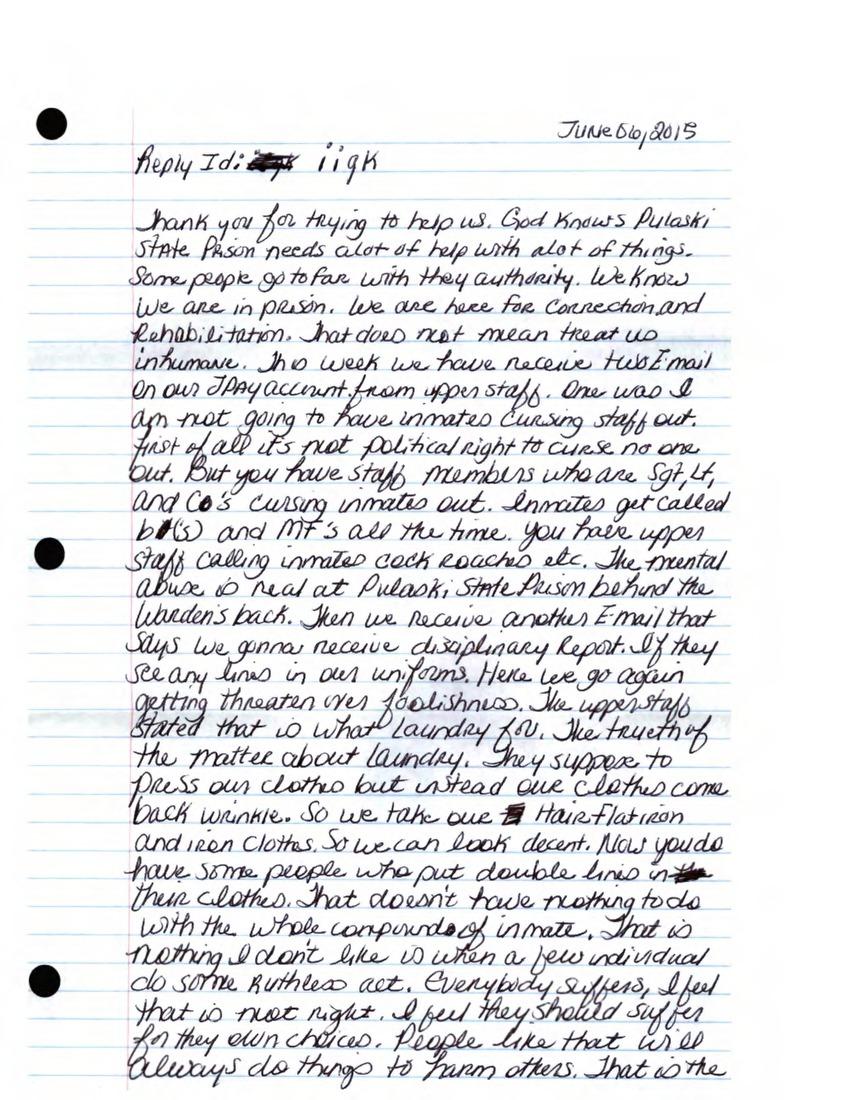 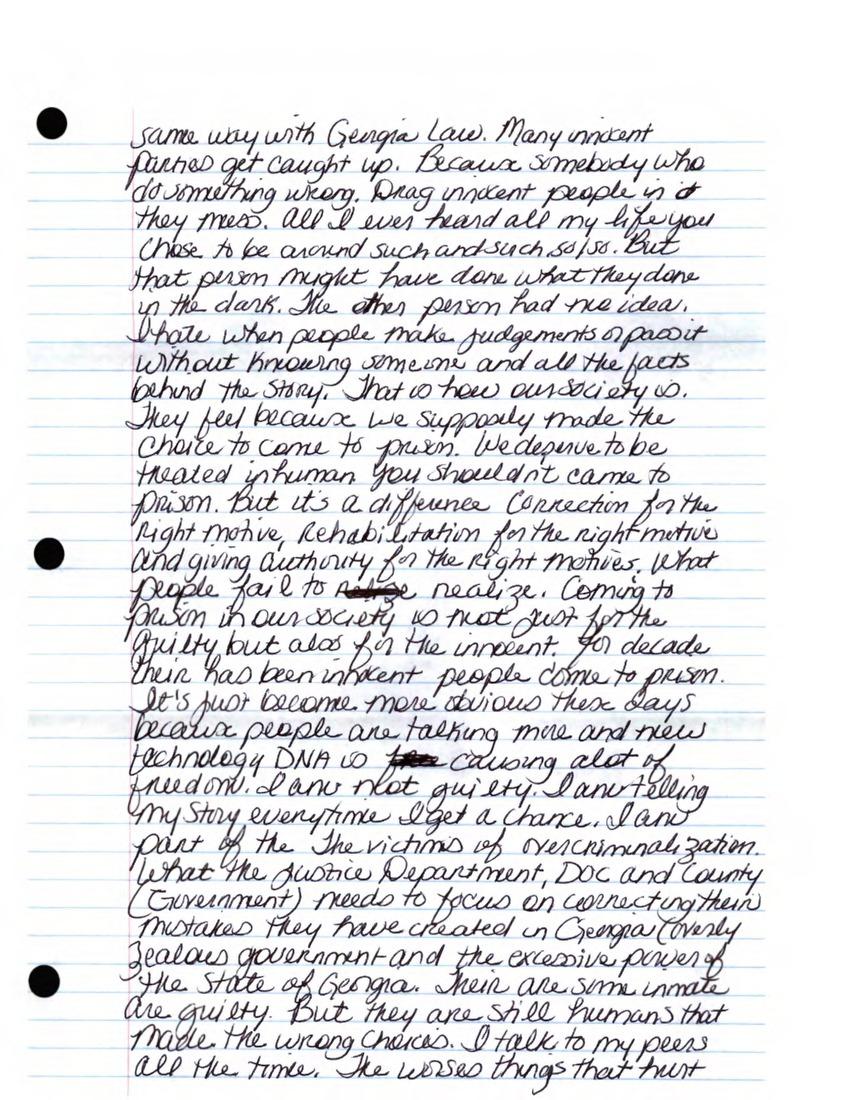 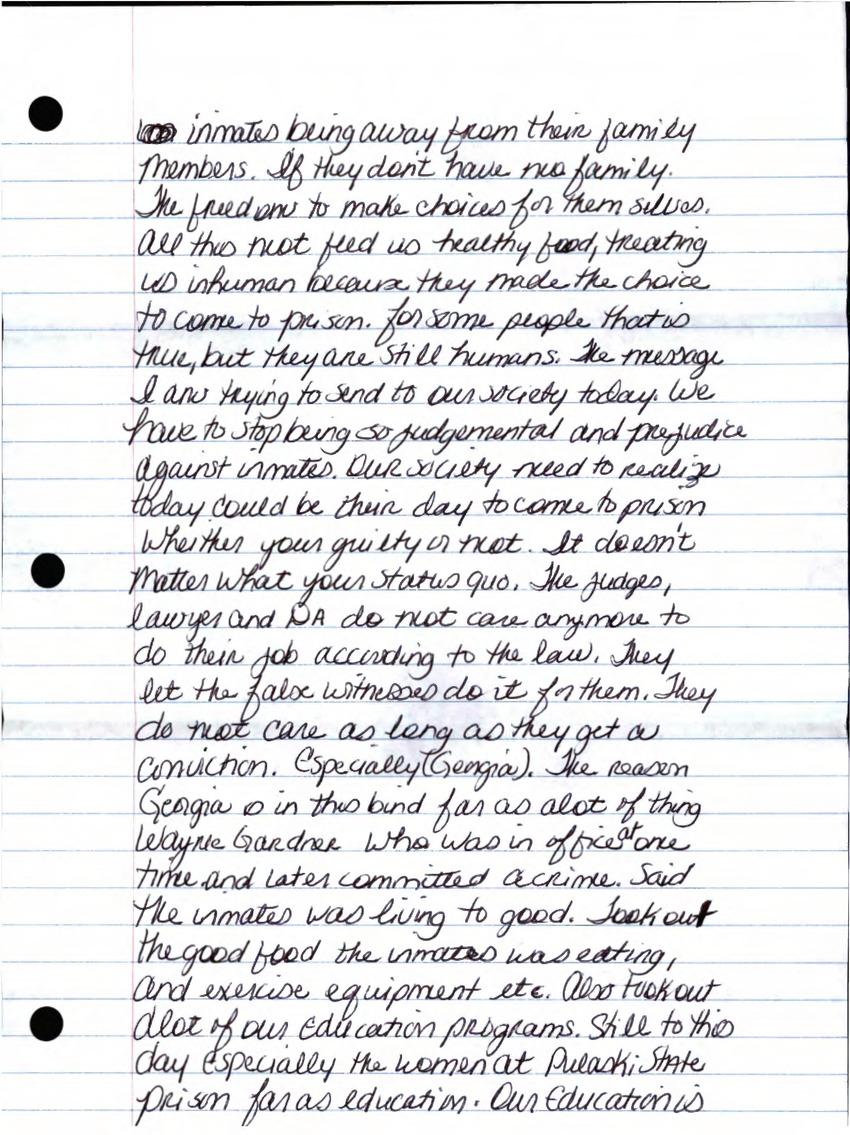 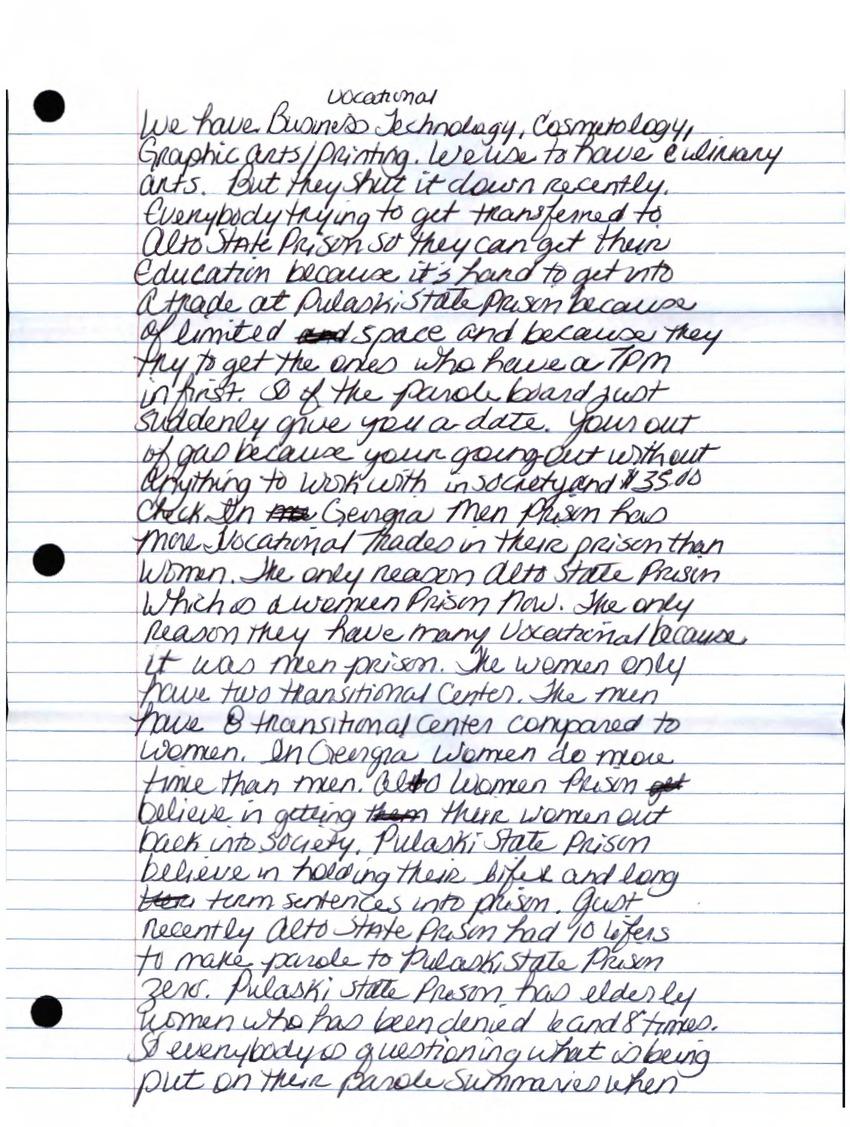 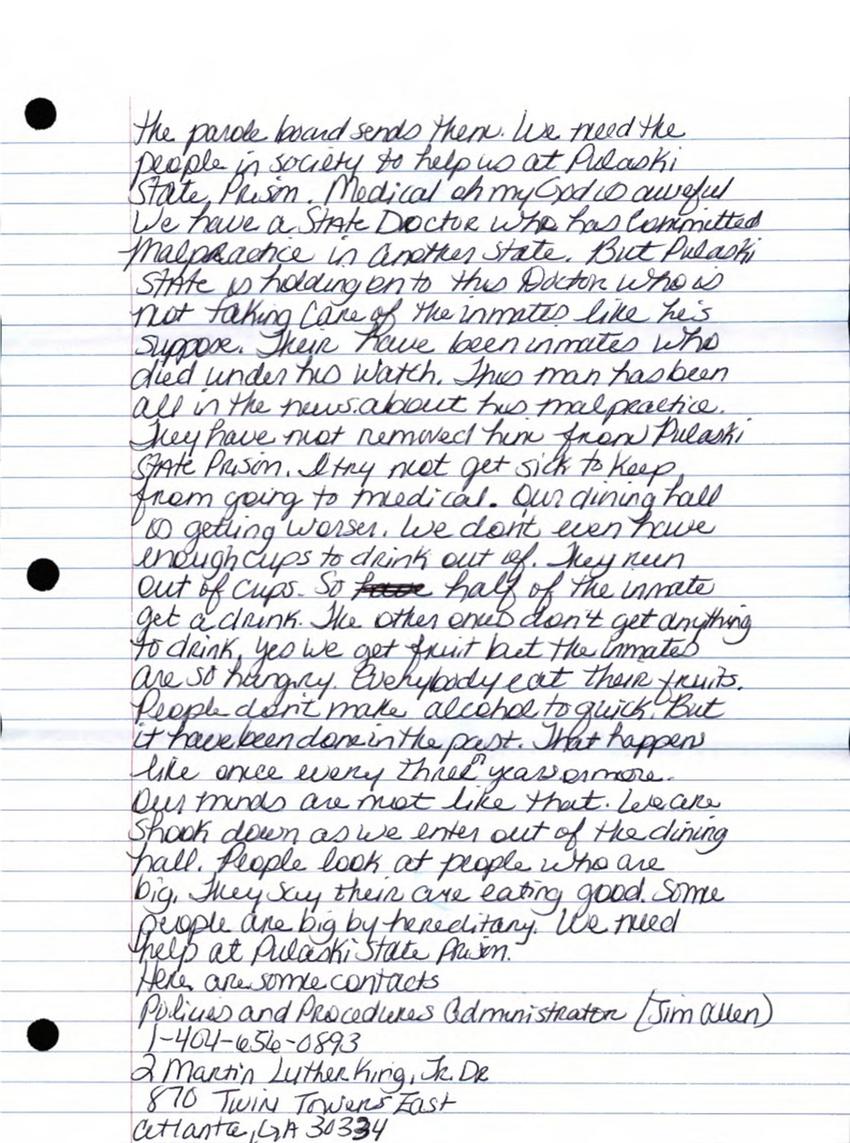 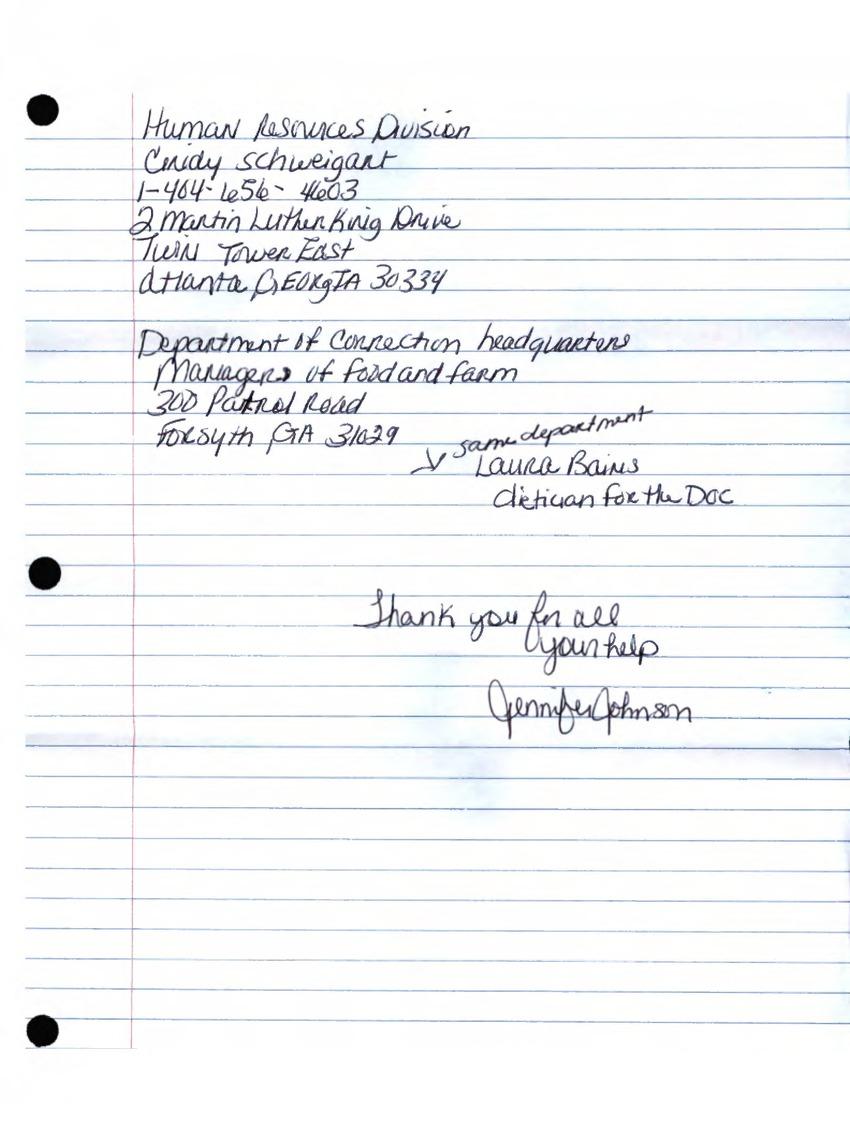