Message In A Bottle Tell Me Why 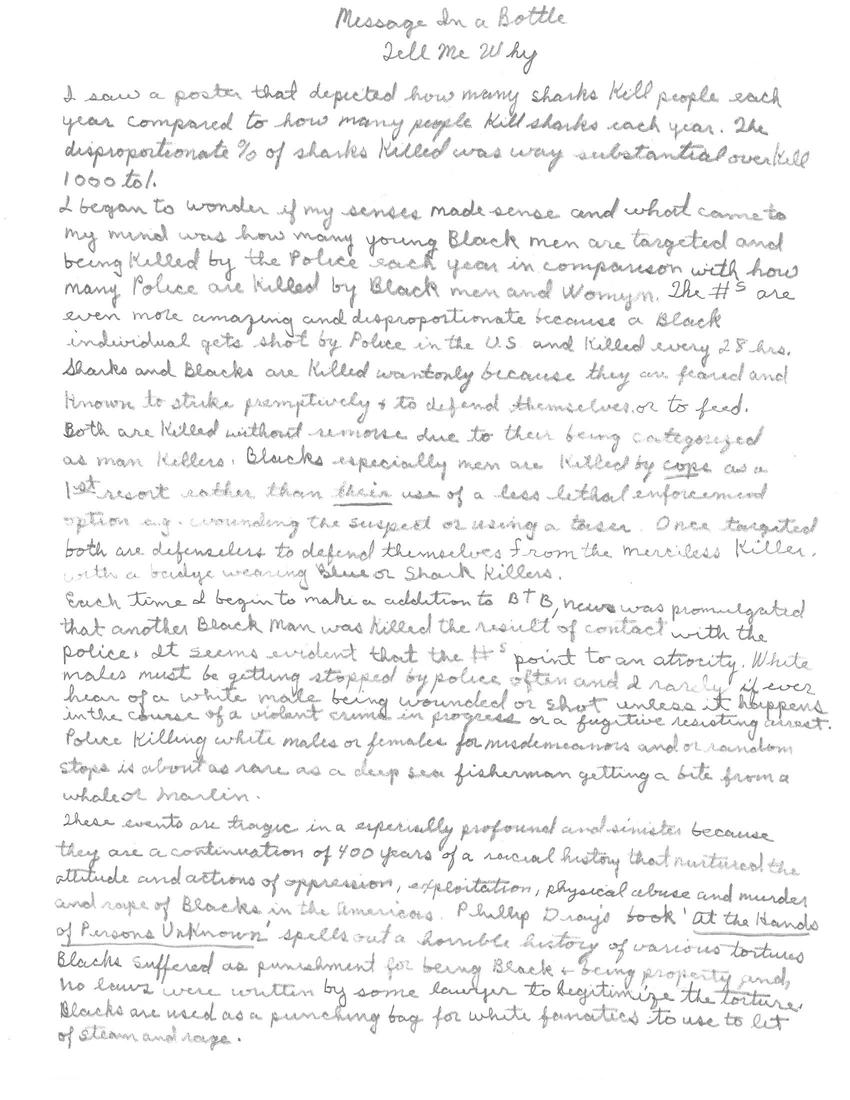 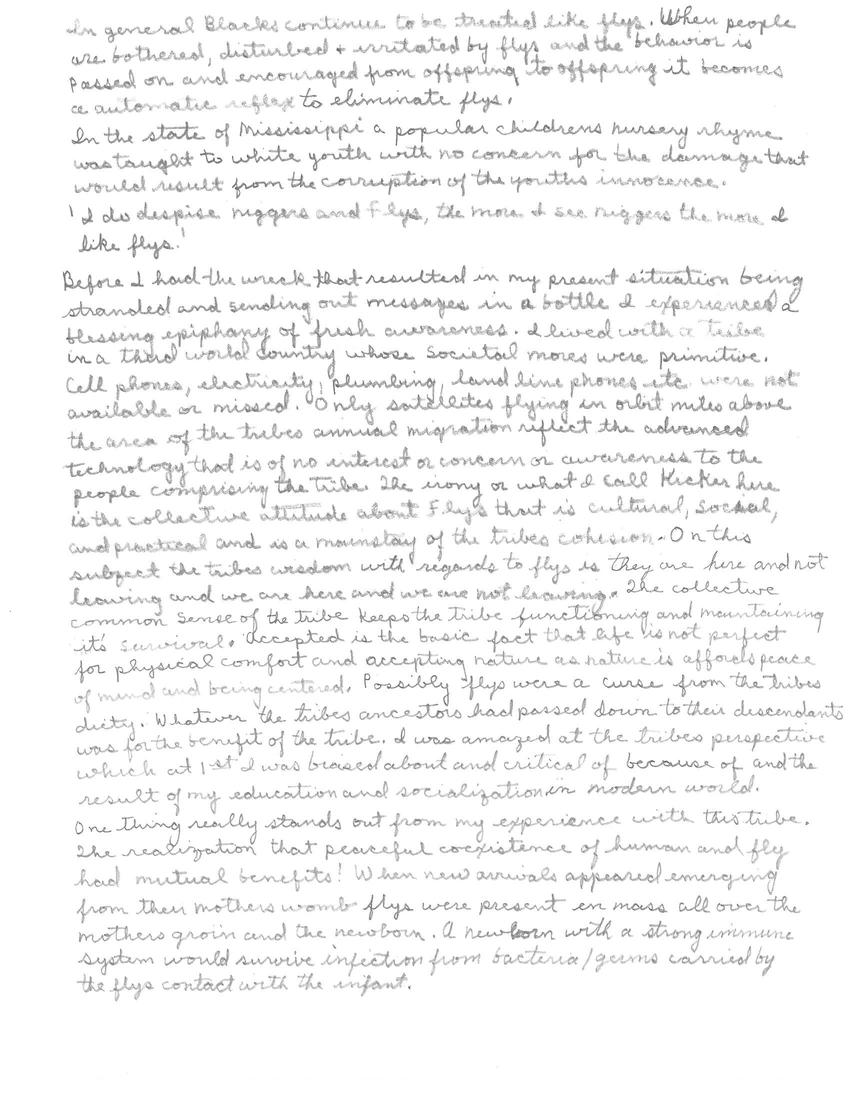 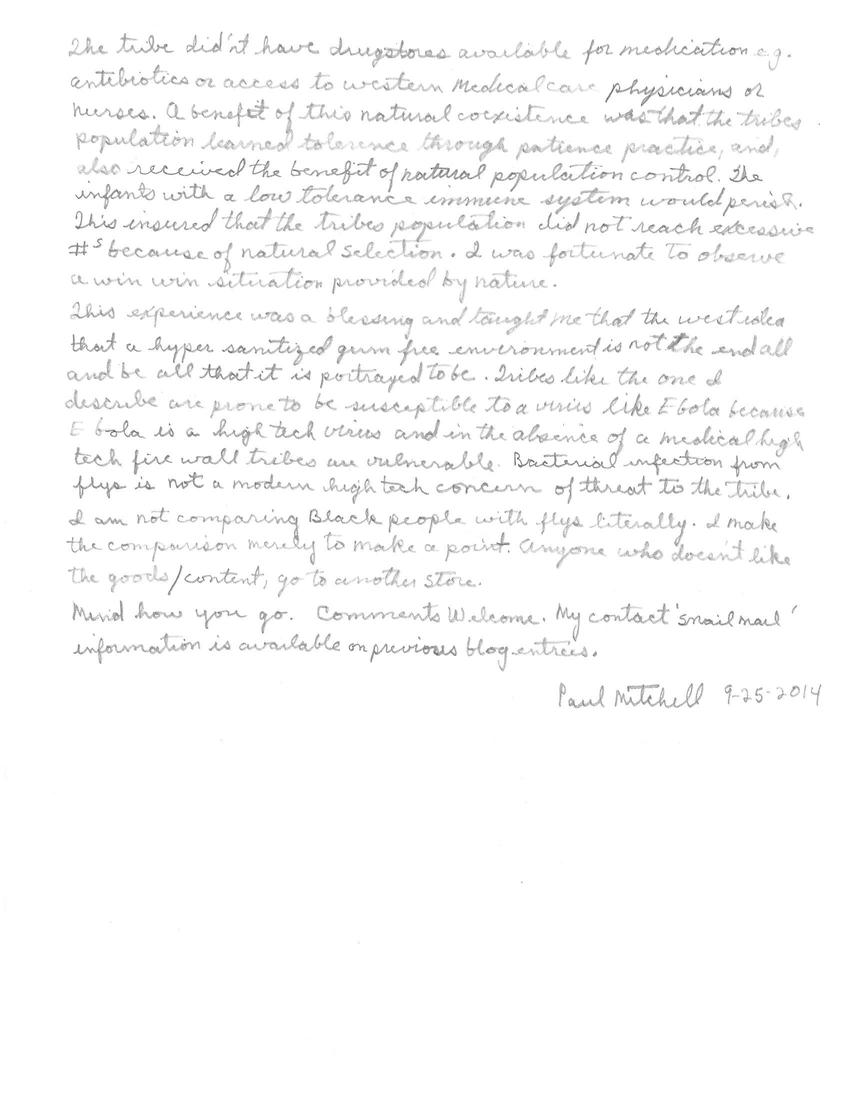 Message In a Bottle
Tell Me Why

I saw a poster that depicted how may sharks kill people each year compared to how many people kill shares each year. The disproportionate % of sharks keeled was way substantial overkill 1000 to 1.

I began to wonder if my senses made sense and what came to my mind was how many young black men are targeted and being killed by the police each year in comparison with how many police killed by black men and women. The #'s are even more amazing and disproportionate because a black individual gets shot by police in the U.S. and killed every 28 hrs. Sharks and blacks are killed wantonly because they are feared and known to strike preemptively and to defend themselves or to feed. Both are killed without remorse due to their being categorized as man killers. Blacks, especially men, are killed by cops on a 1st resort rather than their use of a less lethal enforcement option e.g. wounding the suspect or using a taser. Once targeted both are defenseless to defend themselves from the merciless killer with a badge wearing blue or shark killers.

Each time I begin to make an addition to BTB news was promulgated that another black man was killed, the result of contact with the police. It seems evident that the #'s point to an atrocity. White males must be getting stopped by police often and I rarely, if ever,hear of a white male being wounded or shot unless it happens in the course of a violent crime in progress or a fugitive resisting arrest. Police killing white males or females for misdemeanors and/or random stops is about as rare as a deep sea fisherman getting a bite from a whale or marlin.

These events are tragic in profound and sinister because they are a continuation of 400 years of a racial history that nurtured the attitude and actions of oppression, exploitation, physical abuse and murder and rape of blacks in the Americas. Phillip Dray's book "At The Hands of Persons Unknown" spells out a horrible history of various tortures blacks suffered as punishment for being black and being property and, now laws were written by some lawyer to legitimize the torture. Blacks are used as a punching bag for white fanatics to use to let of steam and rage.

In general, blacks continue to be treated like fly's. When people are bothered, disturbed and irritated by fly's and the behavior is passed on and encouraged from offspring to offspring it becomes an automatic reflex to eliminate fly's.

In the state of Mississippi, a popular nursery rhyme was taught to white youth with no concern for the damage that would result from the corruption of the youths innocence. "I do despise niggers and fly's, the more I see niggers the more I like fly's."

Before I had the wreck that resulted in my present situation being stranded and sending out messages in a bottle, I experienced a blessing epiphany of fresh awareness. I lived with a tribe in a third world country whose societal mores were primitive. Cellphones, electricity, plumbing, land line phones, etc. were not available or missed. Only satellites flying in orbit miles above the area of the tribes annual migration reflect the advanced technology that is of no interest or concern or awareness to the people compromising the tribe. The irony (or what I call "kicker") here is the collective attitude about fly's that is cultural, social, and practical and is a mainstay of the tribes cohesion. On this subject the tribes wisdom with regards to fly's is they are here and not leaving and we are here and we are not leaving. The collective common sense of the tribe keeps the tribe functioning and mountaining it's survival. Accepted is the basic fact that life is not perfect for physical comfort and accepting nature as nature is affords peace of mind and being centered. Possibly fly's were a curse from the tribes deity. Whatever the tribes ancestors had passed down to their descendants was for the benefit of the tribe. I was amazed at the tribes perspective which at 1st I as biased about and critical of because of and the result of my education and socialization in modern world.

One thing that really stands out from my experience with this tribe. The realization that peaceful coexistence of human and fly had mutual benefits! When new arrivals appeared emerging from then mothers womb, fly's were present en mass all over the mothers groin and the newborn. A newborn with a strong immune system would survive infection from bacteria/germs carried by the fly's contact with the infant.

The tribe didn't have drugstores available for medication e.g. antibiotics or access to western medical care physicians or nurses. A benefit of this natural coexistence was that the tribes population learned tolerance through patience practice and also received the benefit of natural population control. The infants with low tolerance immune system would perish. This insured that the tribes population did not reach excessive #'s because of natural selection. I was fortunate to observe a win/win situation provided by nature.

This experience was a blessing and taught me that the west idea that a hyper sanitized, germ free environment is no the end all and be all that it is portrayed to be. Tribes like the one I describe are prone to be susceptible to a virus like Ebola because Ebola is a high tech virus and in the absence of a medical high tech firewall, tribes are vulnerable. Bacterial infection from fly's is not a modern high tech concern of threat to the tribe. I am not comparing black people with fly's literally. I make the comparison merely to make a point. Anyone who doesn't like the goods/content, to to another store.