My Experience With Meditation 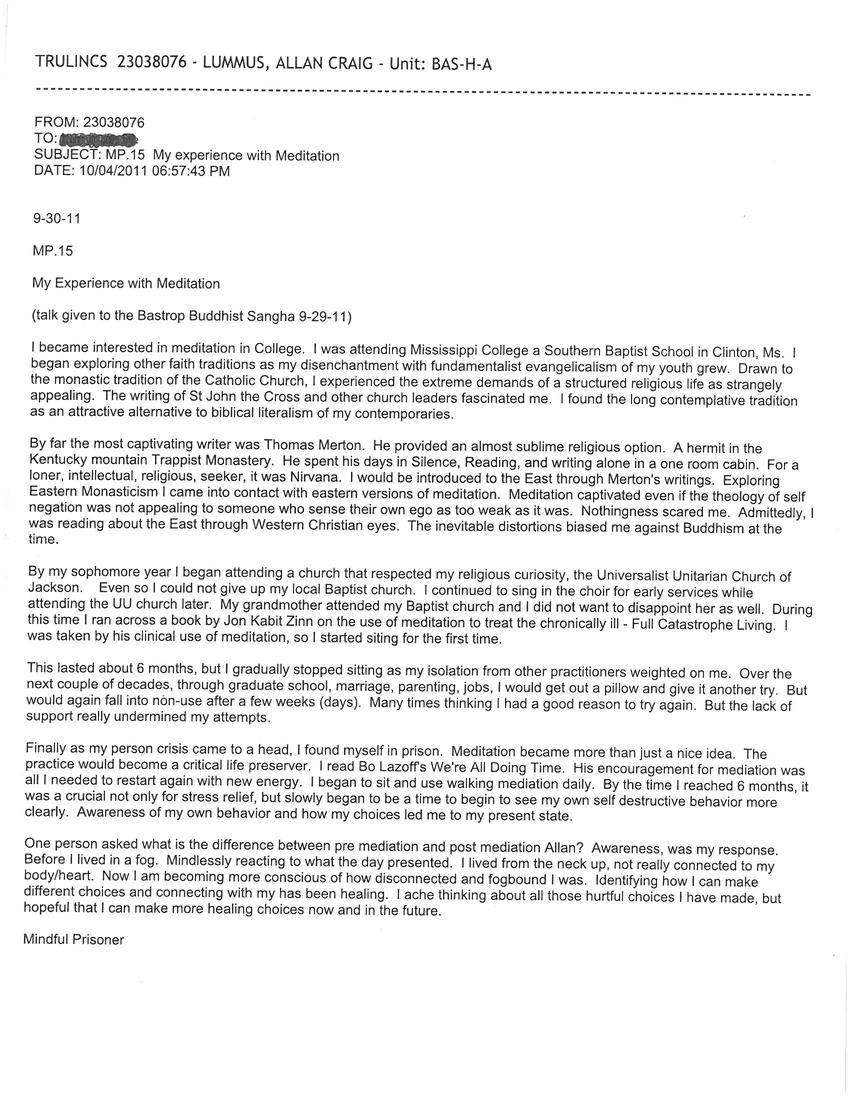 I became interested in meditation in college. I was attending Mississippi College, a Southern Baptist school in Clinton, MS. I began exploring other faith traditions as I grew disenchanted with my fundamentalist evangelicalism. Drawn to the monastic tradition of the Catholic Church, I experienced the extreme demands of a structured religious life as strangely appealing. The writing of St. John the Cross and other church leaders fascinated me. I found the long contemplative tradition as an attractive alternative to biblical literalism of my contemporaries.

By far the most captivating writer was Thomas Merton. He provided an almost sublime religious option. A hermit in the Kentucky mountain Trappist monastery, he spent his days in silence, reading and writing alone in a one-room cabin. For a loner, intellectual, religious seeker, it was Nirvana. I would be introduced to the East through Merton's writings. Exploring Eastern monasticism, I came into contact with Eastern versions of meditation. Meditation captivated me, even if the theory of self-negation was not appealing with a weak ego. Nothingness scares me.

Admittedly, I was reading about the East through Western Christian eyes. The inevitable distortions led to a Buddhist bias for me at the time.

By my sophomore year, I began attending a church that respected my religious curiosity: The Universalist Unitarian Church of Jackson. Even so, I could not give up my local Baptist church. I continued to sing in the choir for early services while attending the UU church later. My grandmother attended my Baptist church, and I did not want to disappoint her.

During this time, I ran across a book by Jon Kabit Zinn on the use of meditation to treat the chronically ill, Full Catastrophe Living. I was taken by his clinical use of meditation, so I started sitting for the first time. This lasted about six months, but I gradually stopped sitting as my isolation from other practitioners weighed on me.

Over the next couple of decades, through graduate school, marriage, parenting, jobs, I would get out a pillow and give it another try. But I would again fall out of it after a few weeks or days. Many times I thought I had a good reason to try again. But the lack of support really undermined my attempts. Finally, as my personal crisis came to a head, I found myself in prison.

Meditation became more than just a nice idea. It would become a critical life preserver. I read Bo Lazoff's We're All Doing Time. His encouragement for meditation was all I needed to restart again with new energy. I began to sit and use walking meditation daily. By the time I reach six months, I was crucial not only for stress relief, but as a way to slowly see my own self-destructive behavior more clearly. Awareness of my own behavior and how my choices led me to my present state.

One person asked about the difference between pre-meditation and post-meditation. Awareness was my response. Before, I lived in a fog, mindlessly reacting to what the day presented. I lived from the neck up, not really connected to my body and heart. Now, I am becoming more conscious of how disconnected and fogbound I was. Identifying how I can make different choices and connecting was how I have been healing. I ache thinking about all those hurtful choices I made, but I'm hopeful that I can make more healing choices now and in the future.