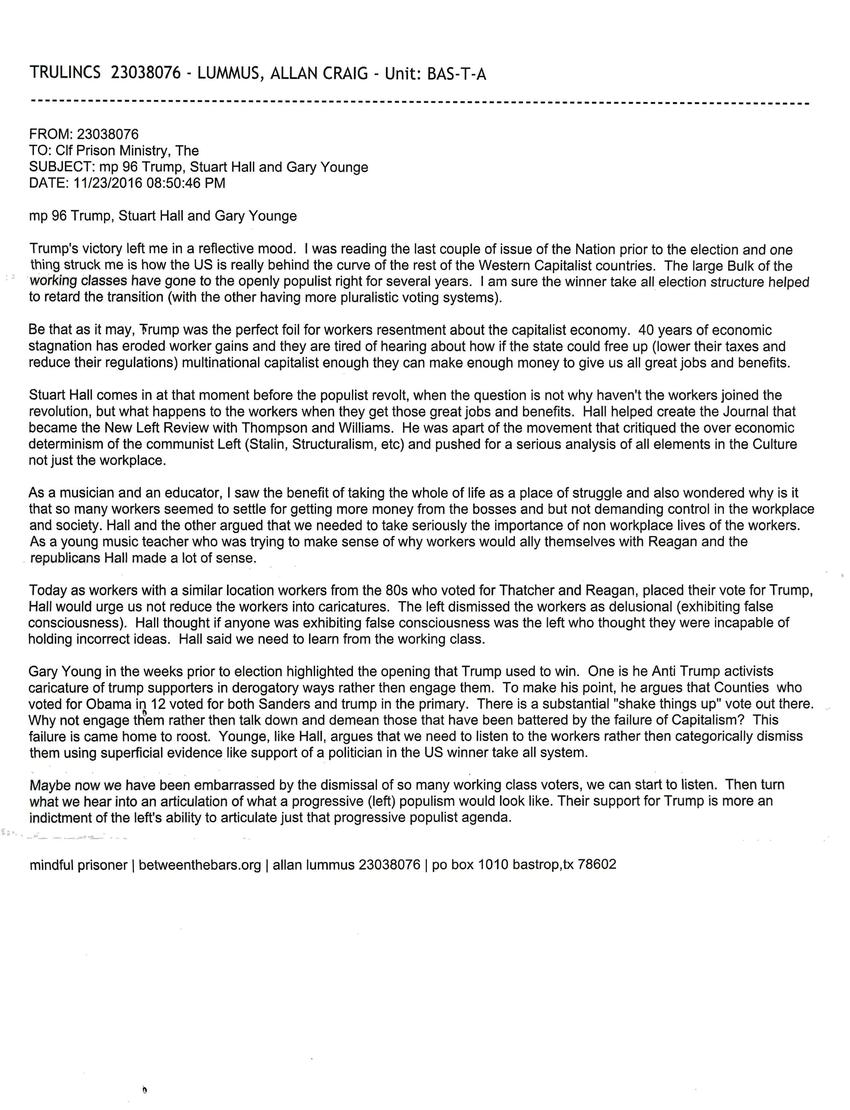 Trump's victory left me in a reflective mood. I was reading the last couple of issue of the Nation prior to the election and one thing struck me is how the US is really behind the curve of the rest of the Western Capitalist countries. The large Bulk of the working classes have gone to the openly populist right for several years. I am sure the winner take all election structure helped to retard the transition (with the other having more pluralistic voting systems).

Be that as it may, Trump was the perfect foil for workers resentment about the capitalist economy. 40 years of economic stagnation has eroded worker gains and they are tired of hearing about how if the state could free up (lower their taxes and reduce their regulations) multinational capitalist enough they can make enough money to give us all great jobs and benefits.

Stuart Hall comes in at that moment before the populist revolt, when the question is not why haven't the workers joined the revolution, but what happens to the workers when they get those great jobs and benefits. Hall helped create the Journal that became the New Left Review with Thompson and Williams. He was apart of the movement that critiqued the over economic determinism of the communist Left (Stalin, Structuralism, etc) and pushed for a serious analysis of all elements in the Culture not just the workplace.

As a musician and an educator, I saw the benefit of taking the whole of life as a place of struggle and also wondered why is it that so many workers seemed to settle for getting more money from the bosses and but not demanding control in the workplace and society. Hall and the other argued that we needed to take seriously the importance of non workplace lives of the workers. As a young music teacher who was trying to make sense of why workers would ally themselves with Reagan and the republicans Hall made a lot of sense.

Today as workers with a similar location workers from the 80s who voted for Thatcher and Reagan, placed their vote for Trump, Hall would urge us not reduce the workers into caricatures. The left dismissed the workers as delusional (exhibiting false consciousness). Hall thought if anyone was exhibiting false consciousness was the left who thought they were incapable of holding incorrect ideas. Hall said we need to learn from the working class.

Gary Young in the weeks prior to election highlighted the opening that Trump used to win. One is he Anti Trump activists caricature of trump supporters in derogatory ways rather than engage them. To make his point, he argues that Counties who voted for Obama in 12 voted for both Sanders and trump in the primary. There is a substantial "shake things up" vote out there. Why not engage them rather than talk down and demean those that have been battered by the failure of Capitalism? This failure is came home to roost. Younge, like Hall, argues that we need to listen to the workers rather than categorically dismiss them using superficial evidence like support of a politician in the US winner take all system.

Maybe now we have been embarrassed by the dismissal of so many working class voters, we can start to listen. Then turn what we hear into an articulation of what a progressive (left) populism would look like. Their support for Trump is more an indictment of the left's ability to articulate just that progressive populist agenda.