Slavery Without the Guilt 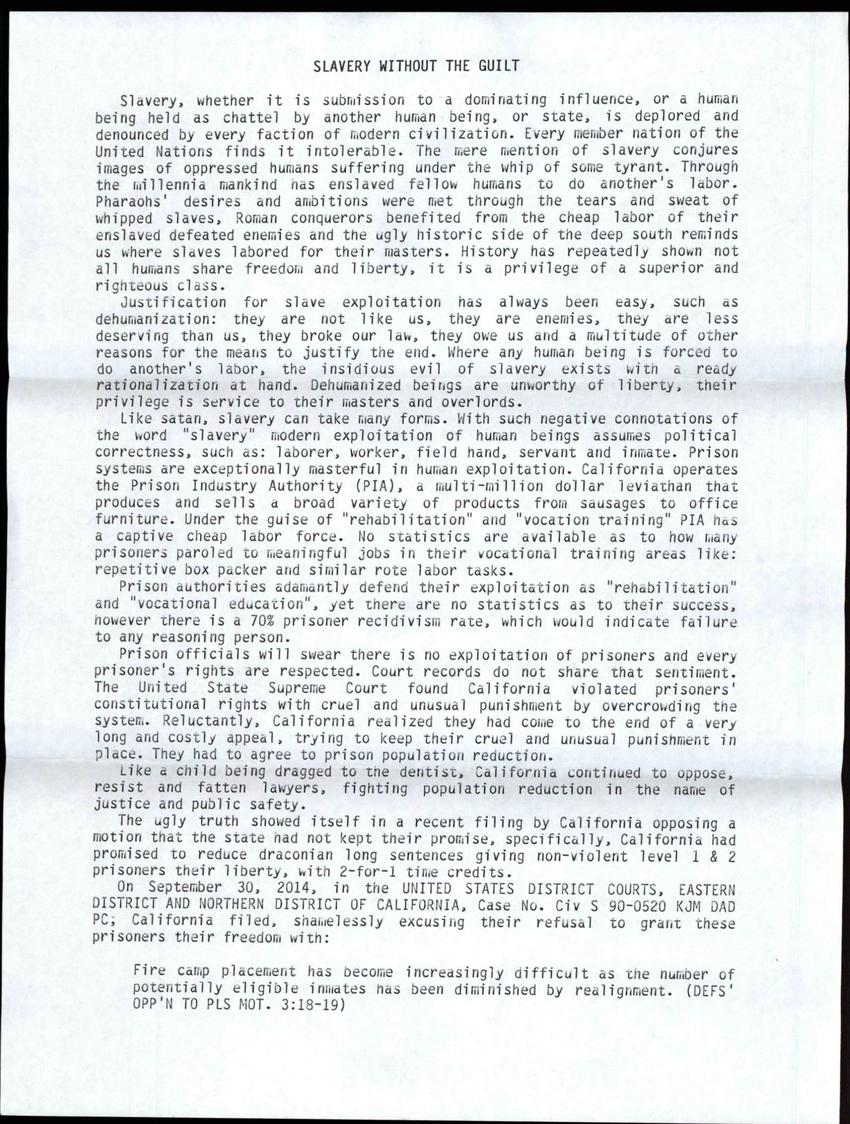 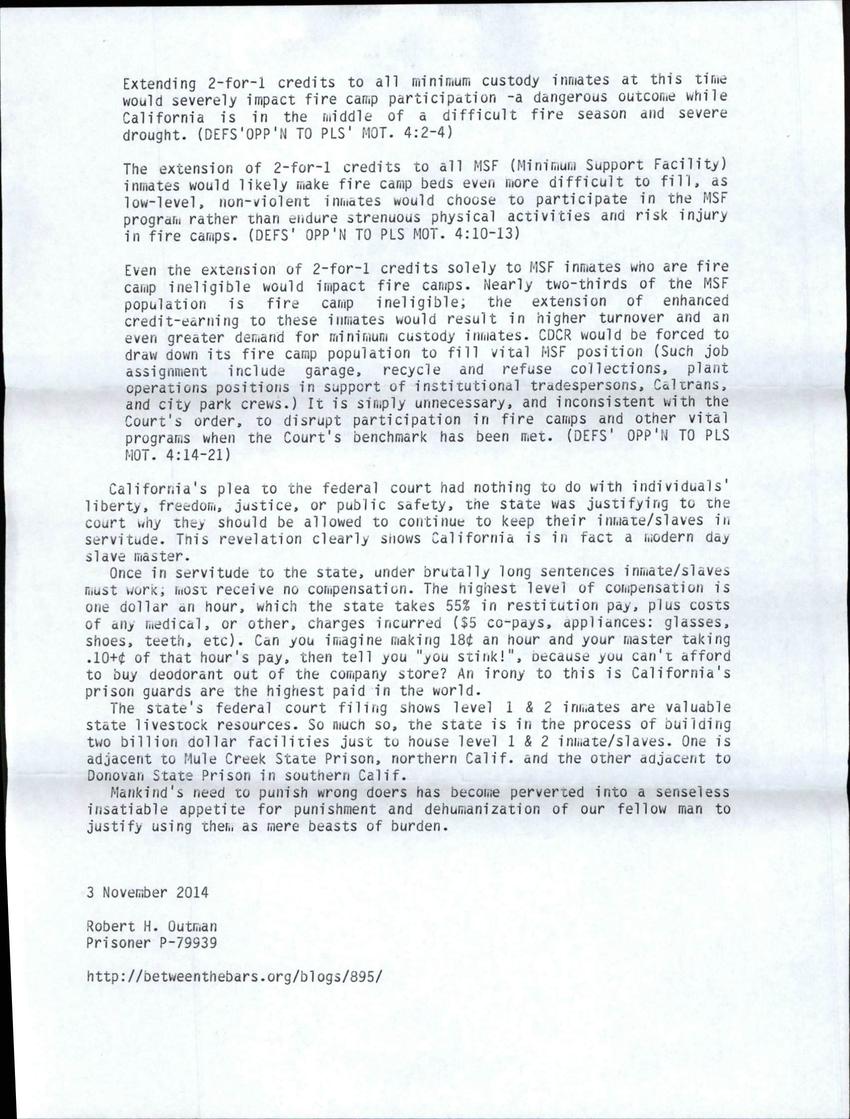 Slavery Without The Guilt

Slavery, whether it is submission to a dominating influence, or a human being held as chattel by another human being, or state, is deplored and denounced by every faction of modern civilization. Every member nation of the United Nations finds it intolerable. The mere mention of slavery conjures images of oppressed humans suffering under the whip of some tyrant. Through the millenia mankind has enslaved fellow humans to do another's labor. Pharaohs' desires and ambitions were met through the tears and sweat of whipped slaves, Roman conquerors benefited from the cheap labor of their enslaved defeated enemies and the ugly historic side of the deep south reminds us where slaves labored for their masters. History has repeatedly shown not all humans share freedom and liberty, it is a privilege of a superior and righteous class.

Justification for slave exploitation has always been easy, such as dehumanization: they are not like us, they are enemies, they are less deserving than us, they broke our law, they owe us and a multitude of other reasons for the means to justify the end. Where any human being is forced to do another's labor, the insidious evil of slavery exists with a ready rationalization at hand. Dehumanized beings are unworthy of liberty, their privilege is service to their masters and overlords.

Like satan, slavery can take many forms. With such negative connotations of the word "slavery" modern exploitation of human beings assumes political correctness, such as: laborer, worker, field hand, servant and inmate. Prison systems are exceptionally masterful in human exploitation. California operates the Prison Industry Authority (PIA), a multi-million dollar leviathan that produces and sells a broad variety of products from sausages to office furniture. Under the guise of "rehabilitation" and "vocation training" PIA has a captive cheap labor force. No statistics are available as to how many prisoners paroled to meaningful jobs in their vocational training areas like: repetitive box packer and similar rote labor tasks.

Prison authorities adamantly defend their exploitation as "rehabilitation" and "vocational education", yet there are no statistics as to their success, however there is a 70% prisoner recidivism rate, which would indicate failure to any reasoning person.

Prison officials will swear there is no exploitation of prisoners and every prisoner's rights are respected. Court records do not share that sentiment. The United State Supreme Court found California violated prisoners' constitutional rights with cruel and unusual punishment by overcrowding the system. Reluctantly, California realized they had come to the end of a very long and costly appeal, trying to keep their cruel and unusual punishment in place. They had to agree to prison population reduction.

Like a child being dragged to the dentist, California continued to oppose, resist and fatten lawyers, fighting population reduction in the name of justice and public safety.

The ugly truth showed itself in a recent filing by California opposing a motion that the state had not kept their promise, specifically, California had promised to reduce draconian long sentences giving non-violent level 1 & 2 prisoners their liberty, with 2-for-1 time credits.

On September 30, 2014, in the UNITED STATES DISTRICT COURTS, EASTERN DISTRICT AND NORTHERN DISTRICT OF CALIFORNIA, Case No. Civ S 90-0520 KJM DAD PC; California filed, shamelessly excusing their refusal to grant these prisoners their freedom with:

"Fire camp placement has become increasingly difficult as the number of potentially eligible inmates has been diminished by realignment." (DEFS' OPP'N TO PLS MOT. 3:18-19)

"Extending 2-for-1 credits to all minimum custody inmates at this time would severely impact fire camp participation -a dangerous outcome while California is in the middle of a difficult fire season and severe drought." (DEFS'OPP'N TO PLS' MOT. 4:2-4)

"The extension of 2-for-1 credits to all MSF (Minimum Support Facility) inmates would likely make fire camp beds even more difficult to fill, as low-level, non-violent inmates would choose to participate in the MSF program rather than endure strenuous physical activities and risk injury in fire camps." (DEFS' OPP'N TO PLS MOT. 4:10-13)

"Even the extension of 2-for-1 credits solely to MSF inmates who are fire camp ineligible would impact fire camps. Nearly two-thirds of the MSF population is fire camp ineligible; the extension of enhanced credit-earning to these inmates would result in higher turnover and an even greater demand for minimum custody inmates. CDCR would be forced to draw down its fire camp population to fill vital MSF position (Such job assignment include garage, recycle and refuse collections, plant operations positions in support of institutional tradespersons, Caltrans, and city park crews.) It is simply unnecessary, and inconsistent with the Court's order, to disrupt participation in fire camps and other vital programs when the Court's benchmark has been met." (DEFS' OPP'N TO PLS MOT. 4:14-21)

California's plea to the federal court had nothing to do with individuals' liberty, freedom, justice, or public safety, the state was justifying to the court why they should be allowed to continue to keep their inmate/slaves in servitude. This revelation clearly shows California is in fact a modern day slave master.

Once in servitude to the state, under brutally long sentences inmates/slaves must work; most receive no compensation. The highest level of compensation is one dollar an hour, which the state takes 55% in restitution pay, plus costs of any medical, or other, charges incurred ($5 co-pays, appliances: glasses, shoes, teeth, etc). Can you imagine making 18 cents an hour and your master taking .10+ cents of that hour's pay, then tell you "you stink!", because you can't afford to buy deodorant out of the company store? An irony to this is California's prison guards are the highest paid in the world.

Mankind's need to punish wrong doers has become perverted into a senseless insatiable appetite for punishment and dehumanization of our fellow man to justify using them as mere beasts of burden.

How about writing me and giving me your present address.

Think of you frequently. Hope you are doing well.

Hope to hear from you.

Dos cannines.
Bob-
I'm not sure you remember me but you trained me to handle Jerry, the termite detection dog many years ago. I have a friend that was involved in a serious auto accident and was looking for you online to ask your opinion on a PTSD dog trainer. To say I was shocked by what I found would be an understatement!! The Bob Outman I knew was a good man that loved animals and had his little quirks just like the rest of us. I remember doing an inspection for the U.S. government at Fort Dix. You had me laughing as you played Patton sitting in front of a map with your pipe. Working with you & Tim was a special time in my life and I've thought about you both a lot over the years. Your stories always had us in stitches. I almost hope this is just bullshit and you're happy and healthy living your retirement on the beach.
I know after reading your blog that this is actually the Bob I knew. My prayers are with you and I hope something happens that will change your situation. Id love to hear from you.
Conni Cook TenHoeve
Formally of
Abarb Pest Services
Haskell, NJ
Cfig157@gmail.com
(scanned reply – view as blog post)
uploaded March 11, 2015.  Original (PDF) 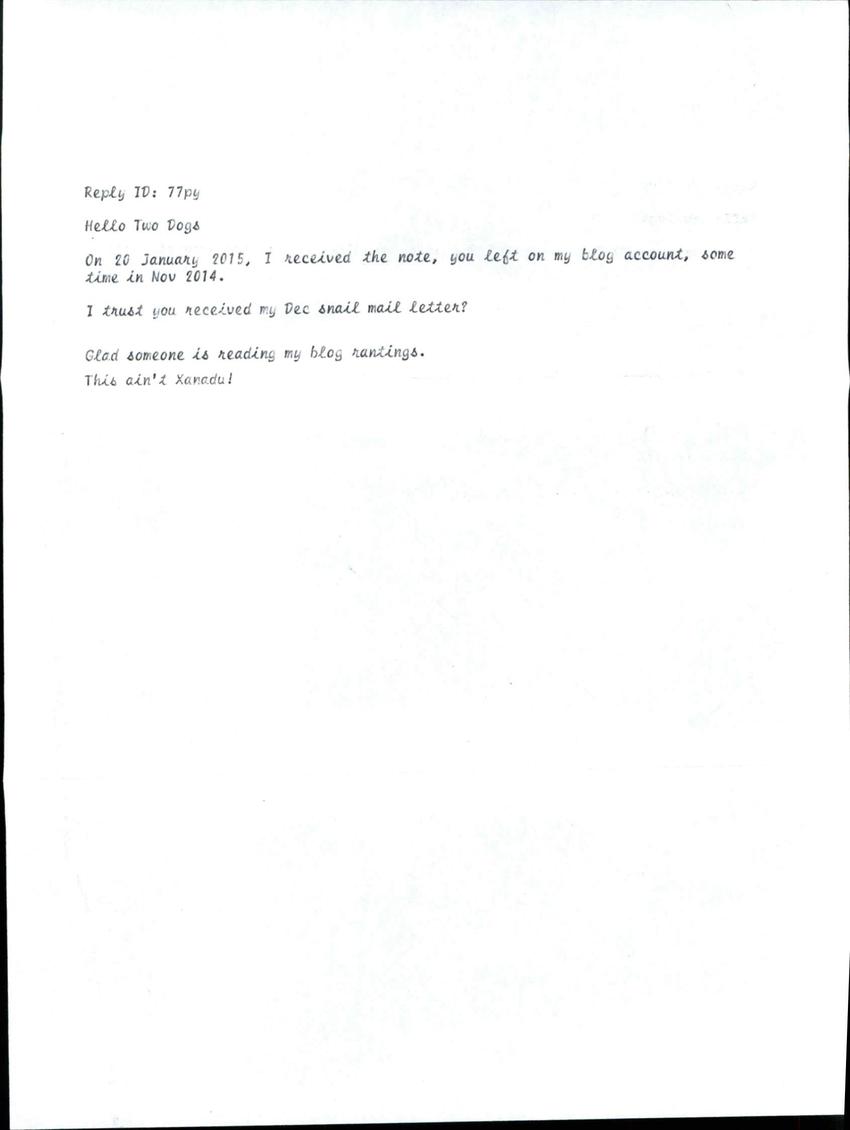 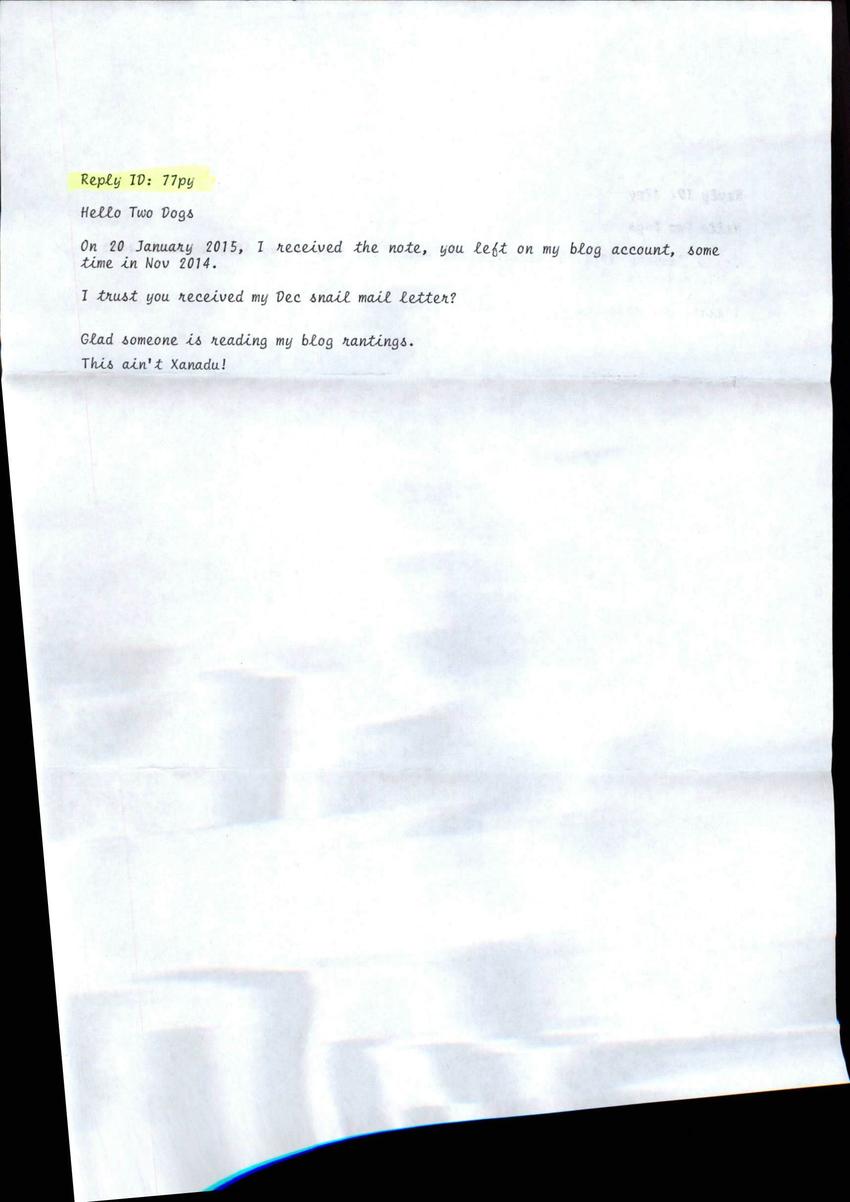 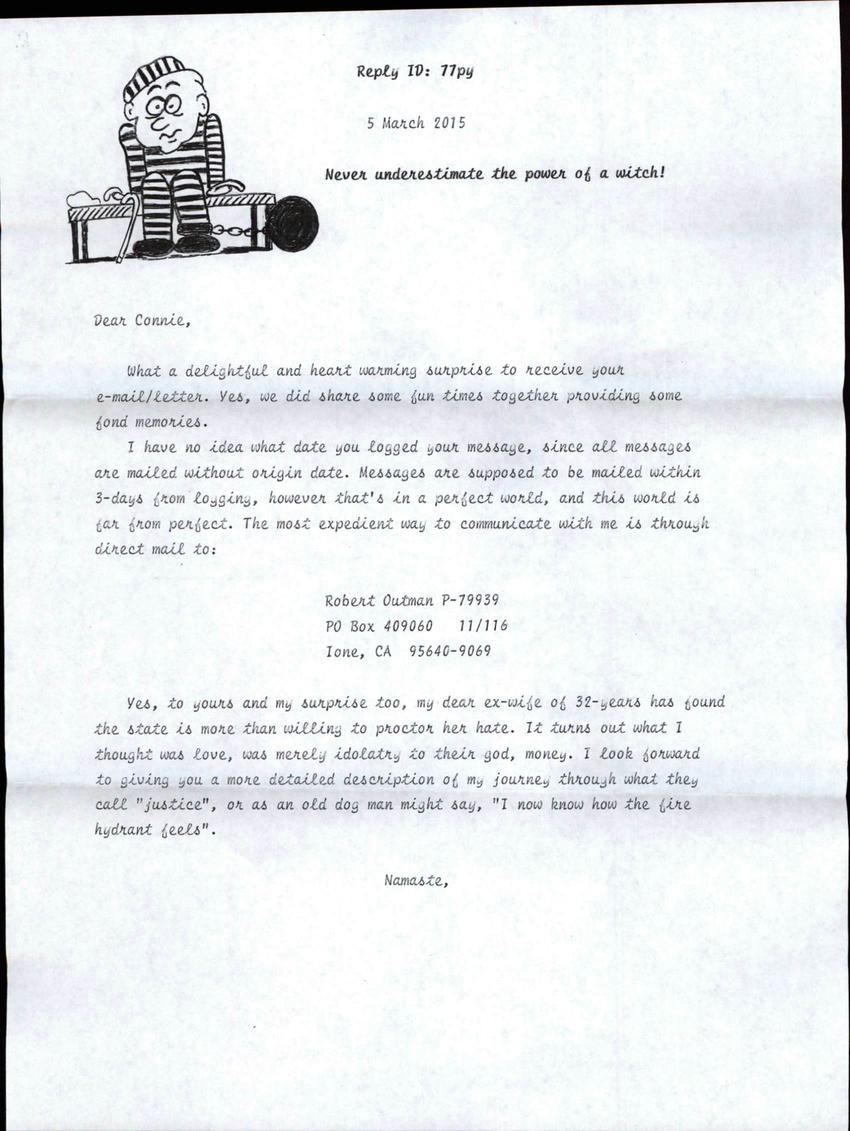