Here's Another "True Story from the Inside"

Reply ✍ Transcribed
From True Stories from the Inside by Edward Coleman (author's profile)
Share this:
uploaded Sept. 30, 2015.  Original (PDF) 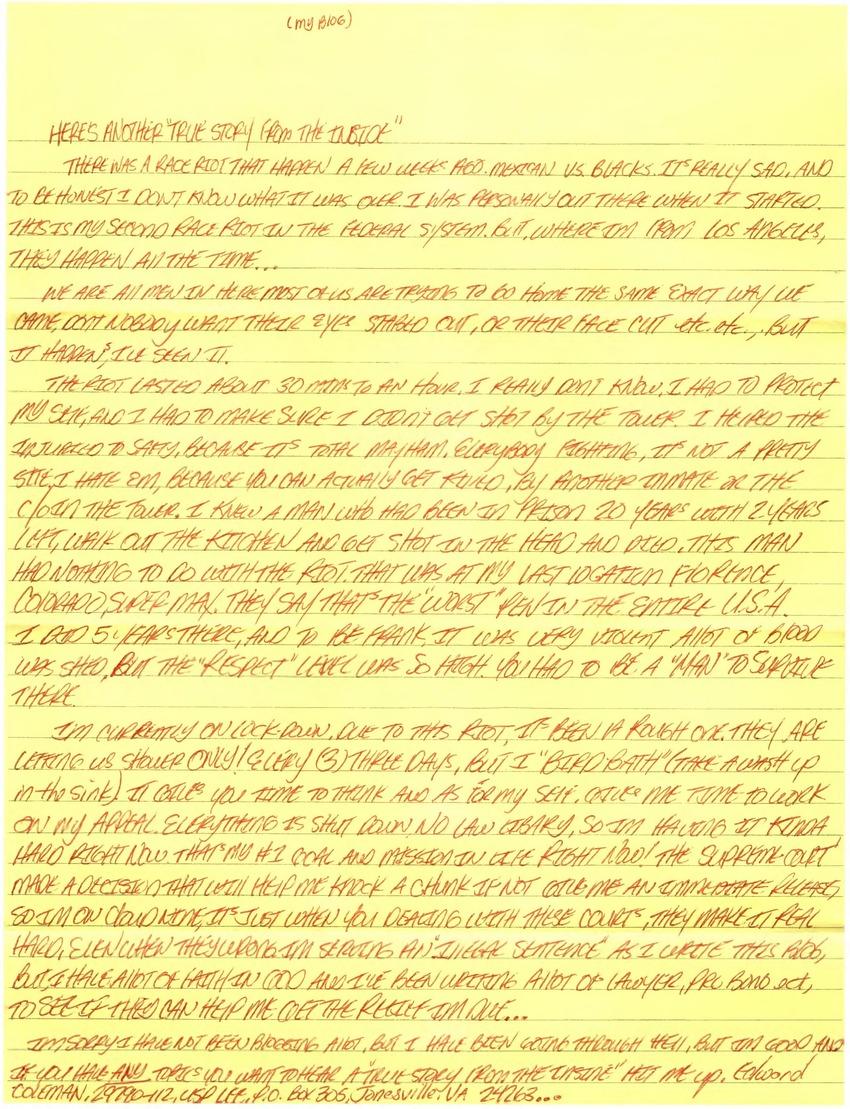 Here's Another True Story From the Inside

There was a race riot that happened! A few weeks ago, Mexican vs. Blacks. It was really sad. And to be honest, I don't know what it was over. I was personally out there when it started. That is my second race riot in the federal system. But where I'm from (Los Angeles), they happen all the time...

We are all men in here. Most of us are trying to go home the same exact way we came. Don't nobody want their eyes stabbed out. Or their face cut, etc., etc. But it happens; I've seen it.

The riot lasted about 30 minutes to an hour. I really don't know. I had to protect myself, and I had to make sure I didn't get shot by the tower. I helped the injured to safety because it's total mayhem. Everybody fighting. It's not a pretty sight. I hate 'm because you can actually get ruined by another inmate or the C/O in the tower. I knew a man who had been to prison 20 years with 2 years left. Walked out the kitchen and got shot in the head and died. This man had nothing to do with the riot. That was at my last location (Florence, Colorado, Super Max). They say that's the "worst" pen in the entire USA. I did 5 years there, and to be frank, it was very violent. A lot of blood was shed, but the "respect" level was so high. You had to be a "man" to survive there.

I'm currently on lockdown. Due to this riot, it's been a rough one. They are letting us shower only(!) ever three (3) days. But I "bird bath" (take a wash up in the sink). It [illegible] you time to think and as for myself, [illegible] me time to work on my appeal. Everything is shut down. No law library. So I'm having it kinda hard right now.

That's my #1 goal and mission in life right now! The Supreme Court made a decision that will help me knock a chunk if not give me an immediate release. So I'm on cloud nine; it's just when you dealing with these courts. They make it real hard, even when they're wrong. I'm serving an "illegal sentence" as I write this blog. But I have a lot of faith in God and I've been writing a lot of lawyers, pro bono, etc., to see if they can help me get the relief I'm due...

I'm sorry I have not been blogging a lot. But I have been going through hell. But I'm good and if you have topics you want to hear, a true story "from the inside", hit me up.

Hey Edward we were bunkies in camp Kilpatrick in 1996