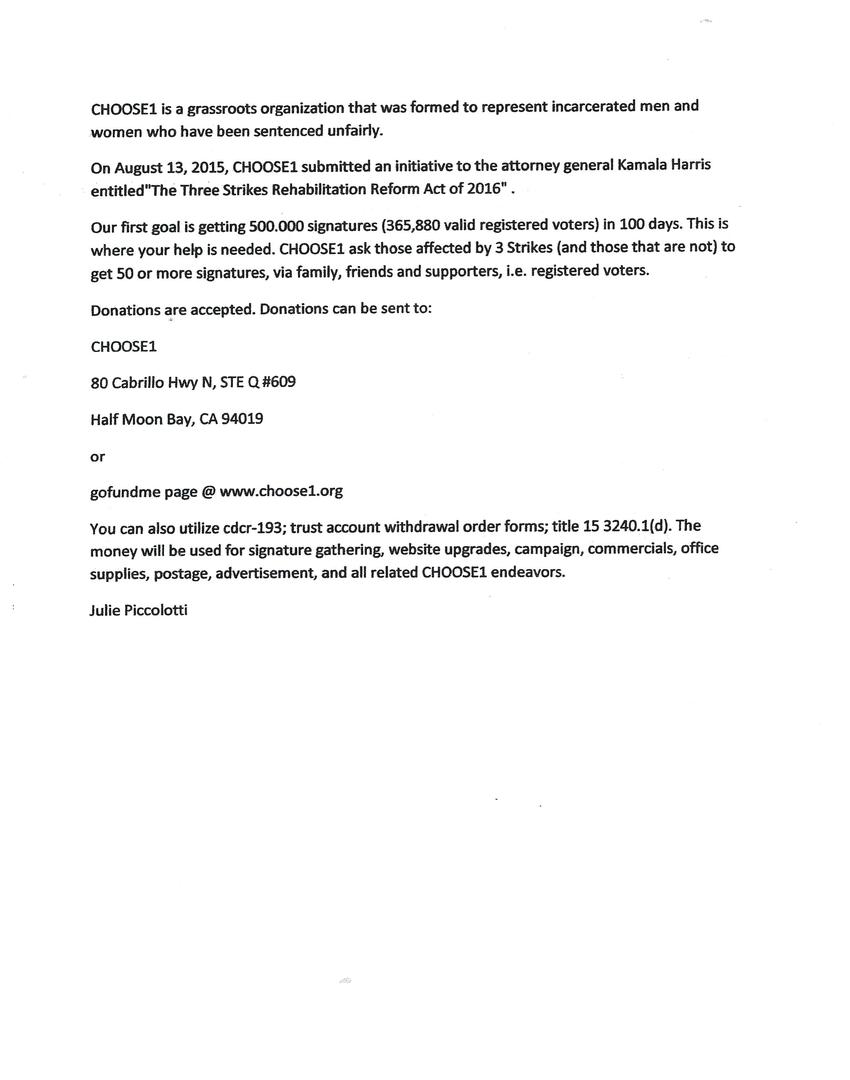 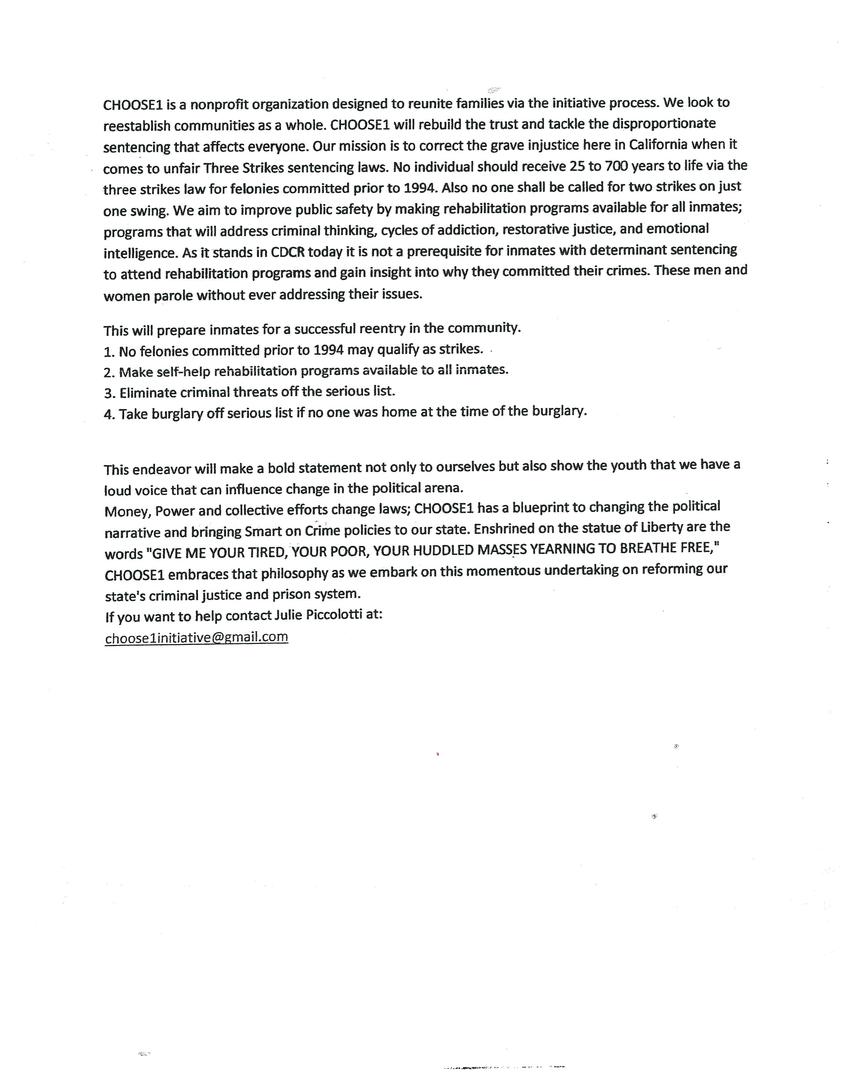 CHOOSE1 is a grassroots organization that was formed to represent incarcerated men and women who have been sentenced unfairly.

On August 13, 2015, CHOOSE1 submitted an initiative to the attorney general Kamala Harris entitled "The Three Strikes Rehabilitation Reform Act of 2016".

Our first goal is getting 500.000 signatures (365,880 valid registered voters) in 100 days. This is where your help is needed. CHOOSE1 ask those affected by 3 Strikes (and those that are not) to get 50 or more signature, via family, friends and supporters, i.e. registered voters.

Donations are accepted. Donations can be sent to:

CHOOSE1 is a non-profit organization designed to reunite families via the initiative process. We look to re-establish communities as a whole. CHOOSE1 will rebuild the trust and tack the disproportionate sentencing that affects everyone. Our mission is to correct the grave injustice here in California when it comes to unfair Three Strikes sentencing laws. No individual should receive 25 to 700 years to life via the three strikes law for felonies committed prior to 1994. Also no one shall be called for two strikes on just one swing. We aim to improve public safety by making rehabilitation programs available for all inmates; programs that will address criminal thinking, cycles of addiction, restorative justice, and emotional intelligence. As it stands in CDCR today it is not a prerequisite for inmates with determinant sentencing to attend rehabilitation programs and gain insight into why they committed their crimes. These men and women parole without ever addressing their issues.

This will prepare inmates for a successful re-entry in the community.
1. No felonies committed prior to 1994 may qualify as strikes.
2. Make self-help rehabilitation programs available to all inmates.
3. Eliminate criminal threats off the serious list.
4. Take burglary off serious list if no one was home at the time of the burglary.

This endeavour will make a bold statement not only to ourselves but also show the youth that we have a loud voice that can influence change in the political arena.
Money, Power and collective efforts change laws; CHOOSE1 has a blueprint to changing the political narrative and bringing Smart on Crime policies to our state. Enshrined on the statue of Liberty are the words "GIVE ME YOUR TIRED, YOUR POOR, YOUR HUDDLED MASSES YEARNING TO BREATHE FREE," CHOOSE1 embraces that philosophy as we embark on this momentous undertaking on reforming our state's criminal justice and prison system.
If you want to help contact Julie Piccolotti at:
choose1initiative@gmail.com

Inmate HUTCHINSON should be acknowledged for his role as a Victim Offender Education Group (VOEG) Facilitator Trainer. Due to his long-standing involvement with the Insight Prison Project VOEG program and his expertise of the material, Mr. HUTCHINSON was chosen to participate in a "train the trainers" workshop, teaching the VOEG curriculum to outside guests on September 24, 2015. Mr. HUTCHINSON spent the day working with guests, which included professionals of diverse backgrounds, so that they may teach the VOEG curriculum at their respective organizations. In addition, Mr. HUTCHINSON was chosen for his considerate style of communication, his willingness to be open and transparent, and his commitment to holding himself accountable for his actions. The training lasted 6 hours and Mr. HUTCHINSON was professional, empathized, and very instructive throughout the training. He was a role model for the VOEG process and should be acknowledged for all his dedication to teach others and to live out the process of Restorative Justice.