Reform by a Thousand Psychological Cuts 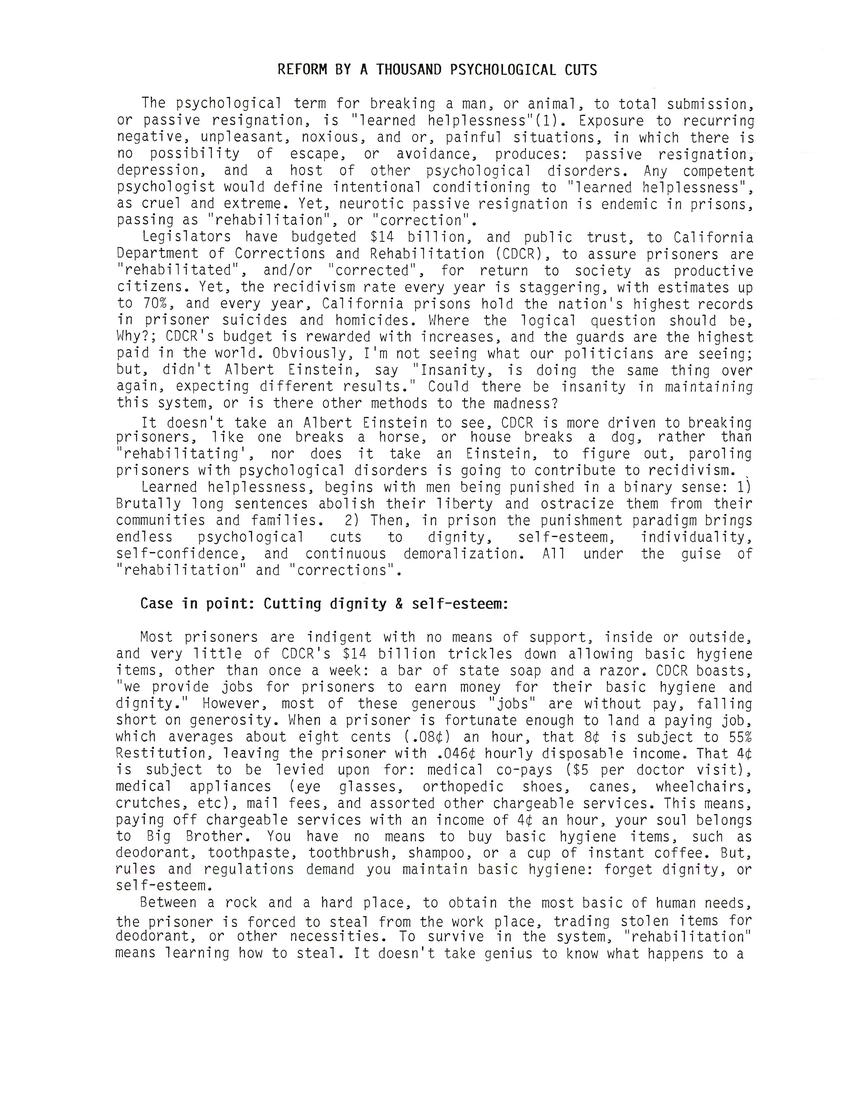 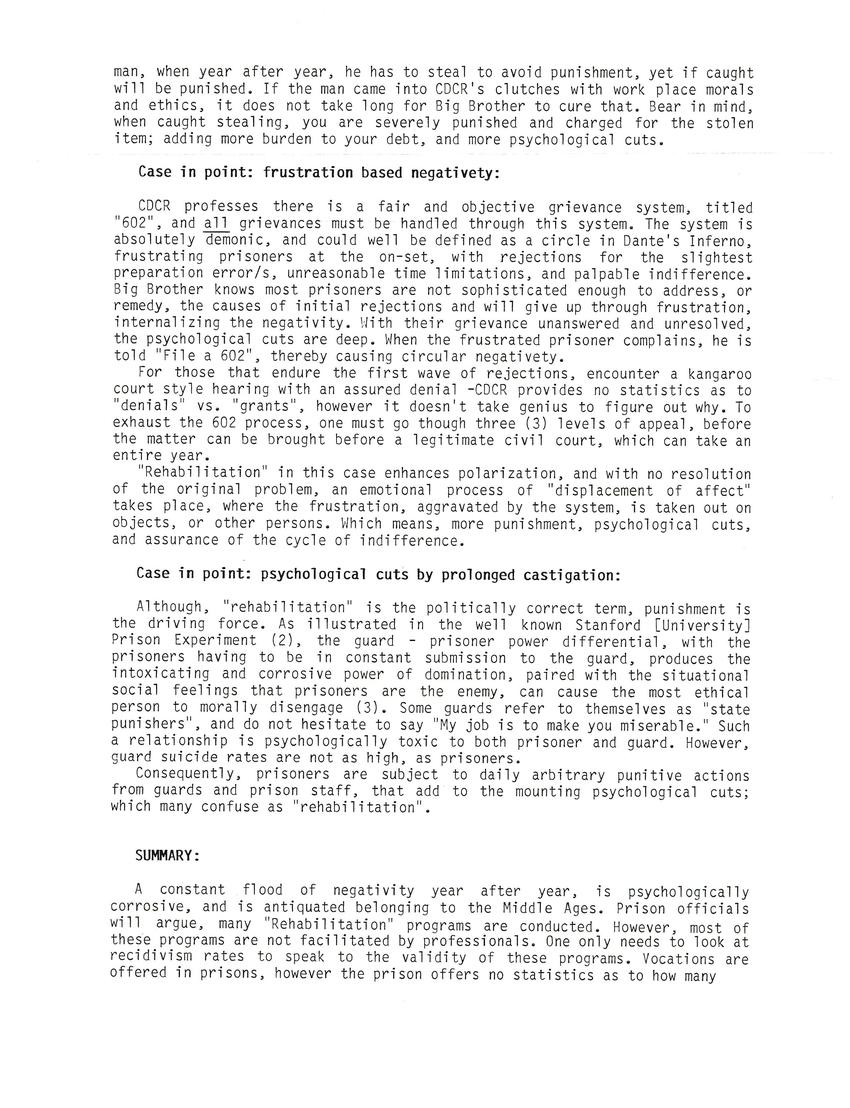 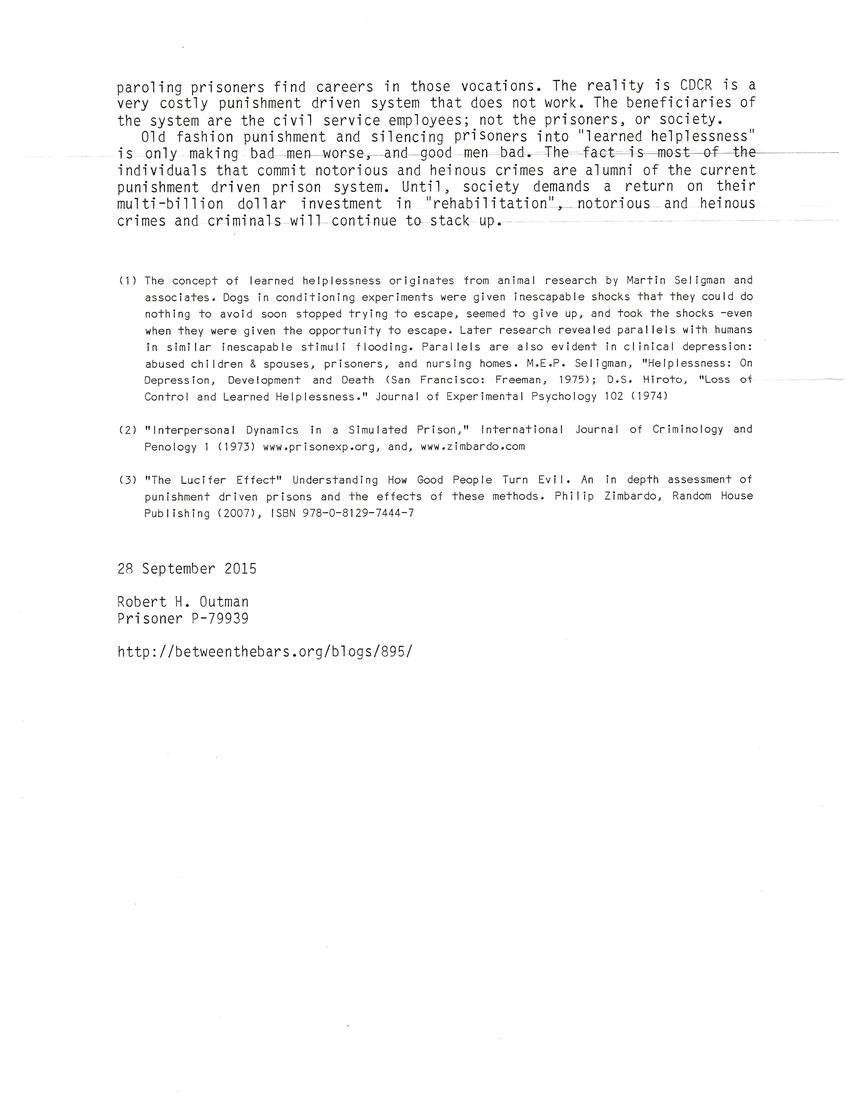 REFORM BY A THOUSAND PSYCHOLOGICAL CUTS

Legislators have budgeted $14 billion, and public trust, to California Department of Corrections and Rehabilitation (CDCR), to assure prisoners are "rehabilitated", and/or "corrected", for return to society as productive citizens. Yet, the recidivism rate every year is staggering, with estimates up to 70%, and every year, California prisons hold the nation's highest records in prisoner suicides and homicides. Where the logical question should be, Why?; CDCR's budget is rewarded with increases, and the guards are the highest paid in the world. Obviously, I'm not seeing what our politicians are seeing; but, didn't Albert Einstein, say "Insanity, is doing the same thing over again, expecting different results." Could there be insanity in maintaining this system, or is there other methods to the madness?

It doesn't take an Albert Einstein to see, CDCR is more driven to breaking prisoners, like one breaks a horse, or a house breaks a dog, rather than "rehabilitating", nor does it take an Einstein, to figure out, paroling prisoners with psychological disorders is going to contribute to recidivism.

Learned helplessness, begins with men being punished in a binary sense: 1) Brutally long sentences abolish their liberty and ostracize them from their communities and families. 2) Then, in prison the punishment paradigm brings endless psychological cuts to dignity, self-esteem, individuality, self-confidence, and continuous demoralization. All under the guise of "rehabilitation" and "corrections".

Most prisoners are indigent with no means of support, inside or outside, and very little of CDCR's $14 billion trickles down allowing basic hygiene items, other than once a week: a bar of state soap and a razor. CDCR boasts, "we provide jobs for prisoners to earn money for their basic hygiene and dignity." However, most of these generous "jobs" are without pay, falling short on generosity. When a prisoner is fortunate enough to land a paying job, which averages about eight cents (.08¢) an hour, that 8¢ is subject to 55% Restitution, leaving the prisoner with .046¢ hourly disposable income. That 4¢ is subject to be levied upon for: medical co-pays (5$ per doctor visit), medical appliances (eye glasses, orthopedic shoes, canes, wheelchairs, crutches, etc), mail fees, and assorted other chargeable services. This means, paying off chargeable services with an income of 4¢ an hour, your soul belongs to Big Brother. You have no means to buy basic hygiene items, such as deodorant, toothpaste, toothbrush, shampoo, or a cup of instant coffee. But, rules and regulations demand you maintain basic hygiene: forget dignity, or self-esteem.

Between a rock and a hard place, to obtain the most basic of human needs, the prisoner is forced to steal from the work place, trading stolen items for deodorant, or other necessities. To survive in the system, "rehabilitation" means learning how to steal. It doesn't take genius to know what happens to a man, when year after year, he has to steal to avoid punishment, yet if caught will be punished. If the man came into CDCR's clutches with work place morals and ethics, it does not take long for Big Brother to cure that. Bear in mind, when caught stealing, you are severely punished and charged for the stolen item; adding more burden to your debt, and more psychological cuts.

Case in point: frustration based negativity:

CDCR professes there is a fair and objective grievance system, titled "602", and all grievances must be handled through this system. The system is absolutely demonic, and could well be defined as a circle in Dante's Inferno, frustrating prisoners at the on-set, with rejections for the slightest preparation error/s, unreasonable time limitations, and palpable indifference. Big Brother knows most prisoners are not sophisticated enough to address, or remedy, the causes of initial rejections and will give up through frustration, internalizing the negativity. With their grievance unanswered and unresolved, the psychological cuts are deep. When the frustrated prisoner complains, he is told "File a 602", thereby causing circular negativity.

For those that endure the first wave of rejections, encounter a kangaroo court style hearing with an assured denial -CDCR provides no statistics as to "denials" vs. "grants", however it doesn't take a genius to figure out why. To exhaust the 602 process, one must go through three (3) levels of appeal, before the matter can be brought before a legitimate civil court, which can take an entire year.

"Rehabilitation" in this case enhances polarization, and with no resolution of the original problem, an emotional process of "displacement of affect" takes place, where the frustration, aggravated by the system, is taken out on objects, or other persons. Which means, more punishment, psychological cuts, and assurance of the cycle of indifference.

Although, "rehabilitation" is the politically correct term, punishment is the driving force. As illustrated in the well known Stanford [University} Prison Experiment (2), the guard - prisoner power differential, with the prisoners having to be in constant submission to the guard, produces the intoxicating and corrosive power of domination, paired with the situational social feelings that prisoners are the enemy, can cause the most ethical person to morally disengage (3). Some guards refer to themselves as "state punishers", and do no hesitate to say "My job is to make you miserable." Such a relationship is psychologically toxic to both prisoner and guard. However, guard suicide rates are not as high, as prisoners.

Consequently, prisoners are subject to daily arbitrary punitive actions from guards and prison staff, that add to the mounting psychological cuts; which many confuse as "rehabilitation".

A constant flood of negativity year after year, is psychologically corrosive, and is antiquated belonging to the Middle Ages. Prison officials will argue, many "Rehabilitation" programs are conducted. However, most of these programs are not facilitated by professionals. One only needs to look at recidivism rates to speak to the validity of these programs. Vocations are offered in prisons, however the prison offers no statistics as to how many paroling prisoners find careers in those vocations. The reality is CDCR is a very costly punishment driven system that does not work. The beneficiaries of the system are the civil service employees; not the prisoners, or society.
Old fashion punishment and silencing prisoners into "learned helplessness" is only making bad men worse, and good men bad. The fact is most of the individuals that commit notorious and heinous crimes are alumni of the current punishment driven prison system. Until, society demands a return on their multi-billion dollar investment in "rehabilitation", notorious and heinous crimes and criminals will continue to stack up.

(1) The concept of learned helplessness originates from animal research by Martin Sellgman and associates. Dogs in conditioning experiments were given inescapable shocks that they could do nothing to avoid soon stopped trying to escape. Later research revealed parallels with humans in similar inescapable stimuli flooding. Parallels are also evident in clinal depression: abused children & spouses, prisoners, and nursing homes. M.E.P. Sellgman, "Helplessness: On Depression, Development and Death (San Francisco, 1975); D.S. Hiroto, "Loss of Control and Learned Helplessness." Journal of Experimental Psychology 102 (1974)

(2) "Interpersonal Dynamics in a Simulated Prison," International Journal of Criminology and Penology 1 (1973) www.prisonexp.org, and www.zimbardo.com

(3) "The Lucifer Effect" Understanding How Good People Turn Evil. An in depth assessment of punishment driven prisons and the effects of these methods. Philip Zimbardo, Random House Publishing (2007), ISBN 978-0-8129-7444-7