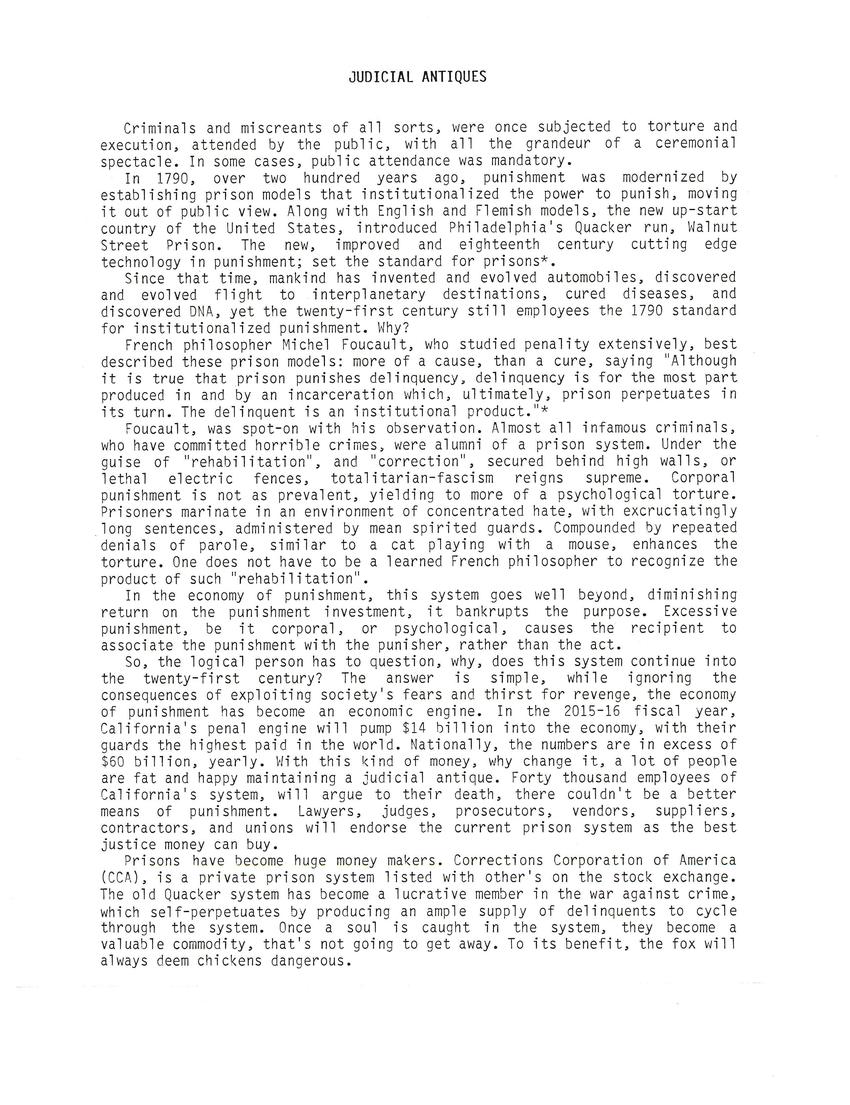 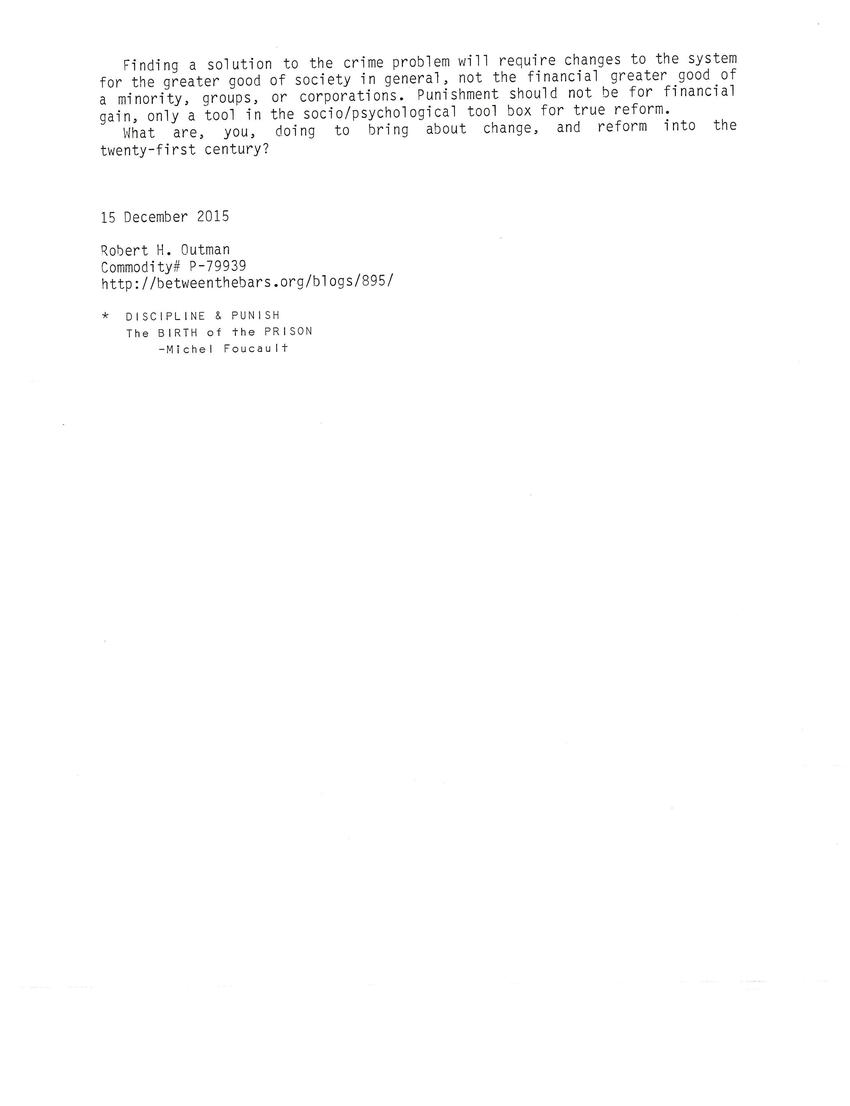 Criminals and miscreants of all sorts, were once subjected to torture and execution, attended by the public, with all the grandeur of a ceremonial spectacle. In some cases, public attendance was mandatory.

In 1790, over two hundred years ago, punishment was modernized by establishing prison models that institutionalized the power to punish, moving it out of public view. Along with English and Flemish models, the new up-start country of the United States, introduced Philadelphia's Quaker run, Walnut Street Prison. The new, improved and eighteenth century cutting edge technology in punishment; set the standard for prisons*.

Since that time, mankind has invented and evolved automobiles, discovered and evolved flight to interplanetary destination, cured diseases, and discovered DNA, yet the twenty-first century still employees the 1790 standard for institutionalized punishment. Why?

French philosopher Michel Foucault, who studied penality extensively, best described these prison models: more of a cause, than a cure, saying "Although it is true that prison punishes delinquency, delinquency is for the most part produced in and by an incarceration which, ultimately, prison perpetuates in its turn. The delinquent is an institutional product."*

Foucalt, was spot-on with his observation. Almost all infamous criminals, who have committed horrible crimes, were alumni of a prison system. Under the guise of "rehabilitation", and "correction", secured behind high walls, or lethal electric fences, totalitarian-fascism reigns supreme. Corporal punishment is not as prevalent, yielding to more of the psychological torture. Prisoners marinate in an environment of concentrated hate, with excruciatingly long sentences, administered by mean spirited guards. Compounded by repeated denials of parole, similar to a cat playing with a mouse, enhances the torture. One does not have to be a learned French philosopher to recognize the product of such "rehabilitation".

In the economy of punishment, this system goes well beyond, diminishing return on the punishment investment, it bankrupts the purpose. Excessive punishment, be it corporal, or psychological, causes the recipient to associate the punishment with the punisher, rather than the act.

So, the logical person has to question, why, does this system continue into the twenty-first century? The answer is simple, while ignoring the consequences of exploiting society's fears and thirst for revenge, the economy of punishment has become an economic engine. In the 2015-16 fiscal year, California's penal engine will pump $14 billion into the economy, with their guards the highest paid in the world. Nationally, the numbers are in excess of $60 billion, yearly. With this kind of money, why change it, a lot of people are fat and happy maintaining a judicial antique. Forty thousand employees of California's system, will argue to their death, there couldn't be a better means of punishment. Lawyers, judges, prosecutors, vendors, suppliers, contractors, and unions will endorse the current prison system as the best justice money can buy.

Prisons have become huge money makers. Corrections Corporation of America (CCA), is a private prison system listed with other's on the stock exchange.The older Quaker system has become a lucrative member in the war against crime, which self-perpetuates by producing an ample supply of delinquents to cycle through the system. Once a soul is caught in the system, they become a valuable commodity, that's not going to get away. To its benefit, the fox will always deem chickens dangerous.

Finding a solution to the crime problem will require changes to the system for the greater good of society in general, not the financial greater good of a minority, groups, or corporations. Punishment should not be for financial gain, only a tool in the socio/psychological tool box for true reform.

What are, you, doing to bring about change, and reform into the twenty-first century?

*Discipline & Punish
The Birth of the Prison
- Michel Foucault

Thanks for writing! I finished the transcription for your post. I think you are right that the system is antiquated. Removing the punishment from the public sphere has allowed for the cycle to perpetuate, largely unbeknownst to huge sectors of the population. Many of your writings are very interesting and I look forward to reading more!