I Strive for Excellence 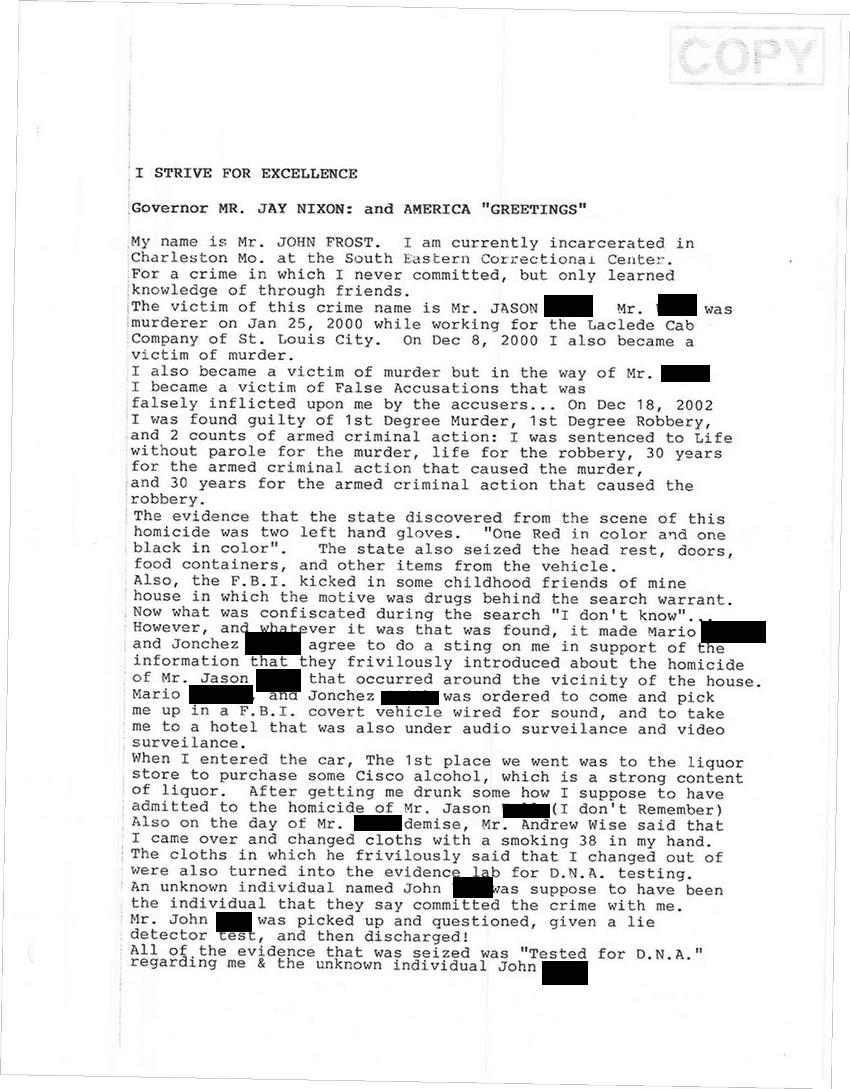 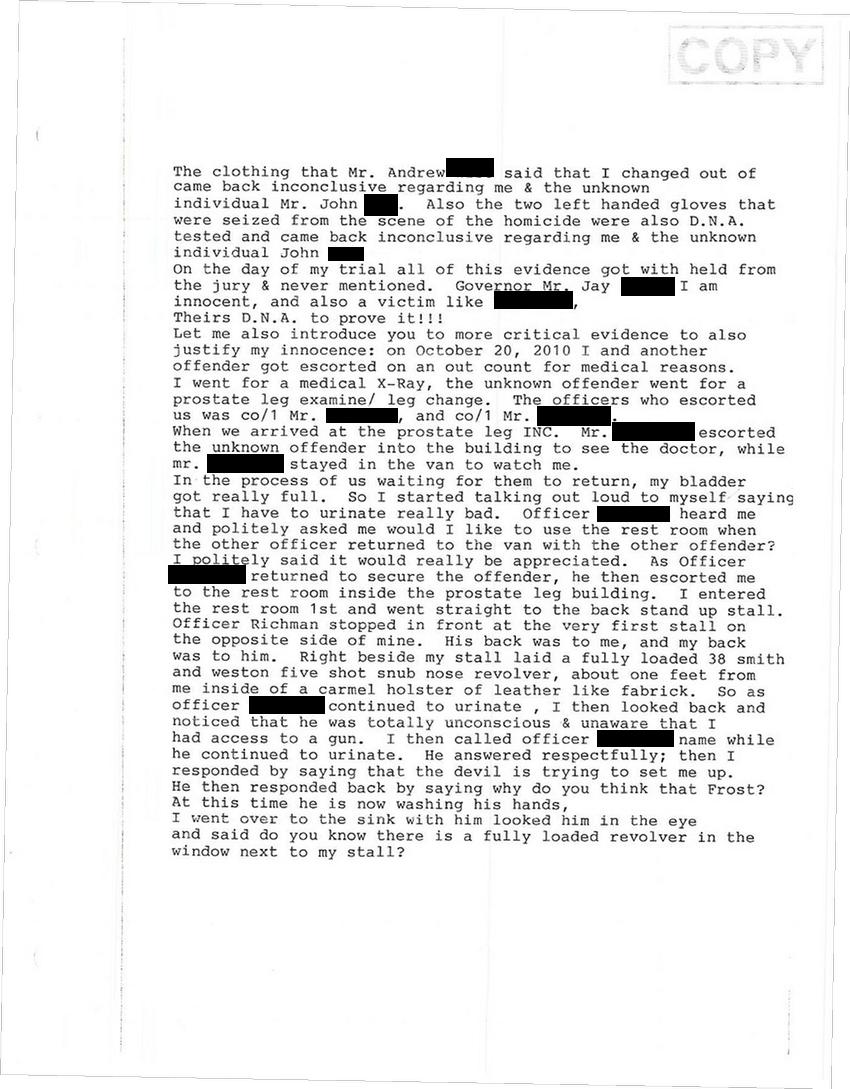 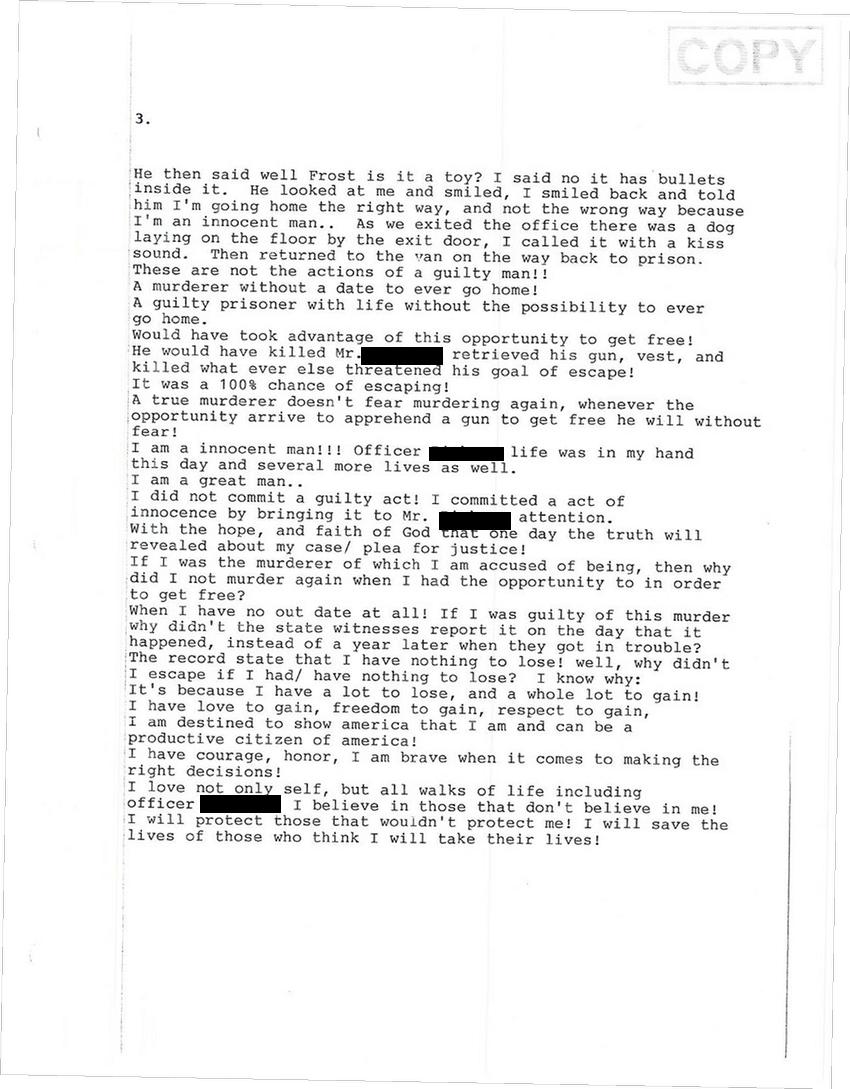 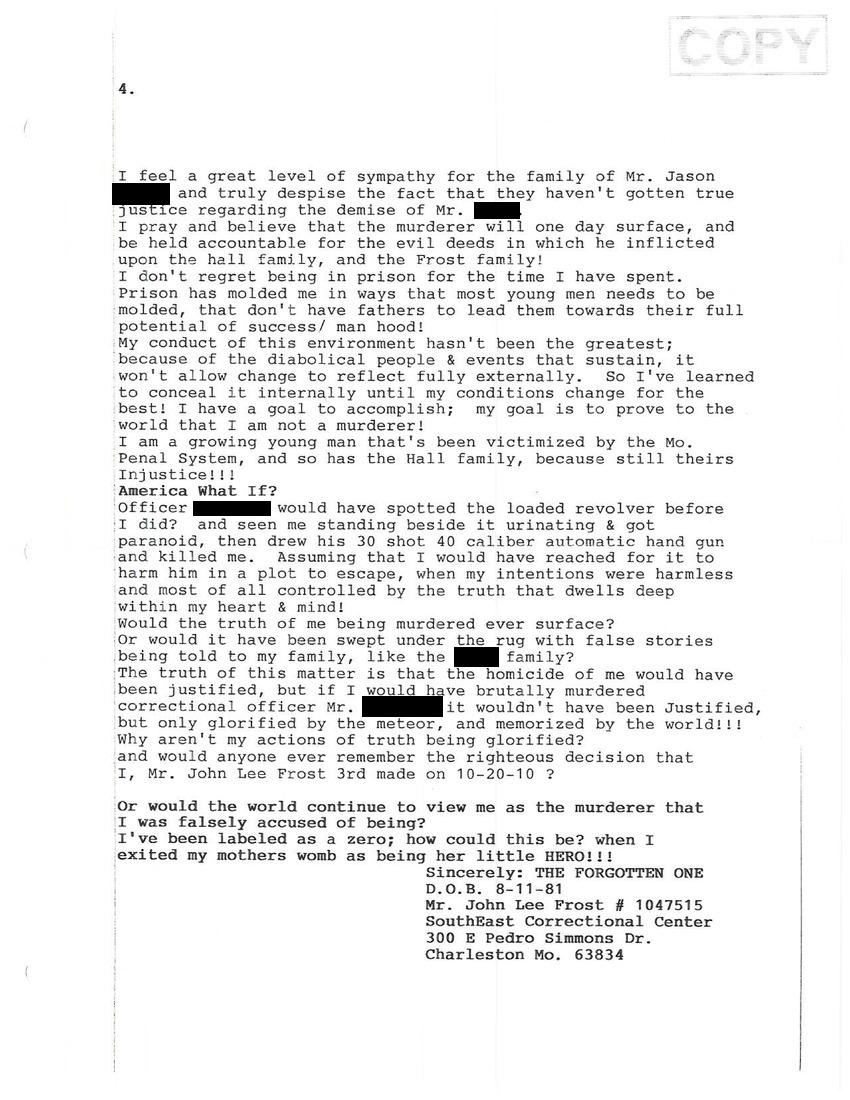 I STRIVE FOR EXCELLENCE

My name is Mr. JOHN FROST. I am currently incarcerated in Charleston Mo. at the South Eastern Correctional Center. For a crime in which I never committed, but only learned knowledge of through friends.

The evidence that the state discovered from the scene of this homicide was two left hand gloves. "One Red in color and one black in color." The state also seized the head rest, doors, food containers, and other items from the vehicle.

Also, the F.B.I. kicked in some childhood friends of mine house in which the motive was drugs behind the search warrant. Now what was confiscated during the search "I don't know." However, and whatever it was that was found, it made Mario and Jonchez [REDACTED] agree to do a sting on me in support of the information that they frivolously introduced about the homicide of Mr. Jason [REDACTED] that occurred around the vicinity of the house. Mario [REDACTED] and Jonchez [REDACTED] were ordered to come and pick me up in a F.B.I. covert vehicle wired for sound, and to take me to a hotel that was also under audio surveillance and video surveillance.

When I entered the car, the 1st place we went was to the liquor store to purchase some Cisco alcohol, which is a strong content of liquor. After getting me drunk somehow I suppose to have admitted to the homicide of Mr. Jason [REDACTED[ (I don't remember). Also on the day of Mr. [REDACTED]'s demise, Mr. Andrew Wise said that I came over and changed clothes with a smoking .38 in my hand. The clothes in which he frivolously said that I changed out of were also turned into the evidence lab for D.N.A. testing. An unknown individual named John [REDACTED] was supposed to have been the individual they say committed the crime with me. Mr. John [REDACTED] was picked up and questioned, given a lie detector test, and then discharged!

On the day of my trial all of this evidence got withheld from the jury and never mentioned. Governor Mr. Jay [REDACTED] I am innocent, and also a victim like [REDACTED], there's D.N.A. to prove it!!

In the process of us waiting for them to return, my bladder got really full. So I started talking out loud to myself saying that I have to urinate really bad. Officer [REDACTED] heard me and politely asked me would I like to use the restroom when the other officer returned to the can with the other offender? I politely said it would really be appreciated. As Officer [REDACTED] returned to secure the offender, he then escorted me to the restroom inside the prostate leg building. I entered the restroom 1st and went straight to the back stand-up stall. Officer Richman stopped in front at the very first stall on the opposite side of mine. His back was to me, and my back was to him. Right beside my stall laid a fully loaded .38 Smith and Wesson five shot snub nose revolver, about one foot from inside of a caramel holster of leather-like fabric. So as Officer [REDACTED] continued to urinate, I then looked back and noticed that he was totally unconscious and unaware that I had access to a gun. I then called Officer [REDACTED]'s name while he continued to urinate. He answered respectfully; then I responded by saying that the devil is trying to set me up. He then responded back by saying why do you think that Frost? At this time he is now washing his hands, I went over to the sink with him, looked him in the eye and said do you know there is a fully loaded revolver in the window next to my stall?

He then said well Frost is it a toy? I said no it has bullets inside it. He looked at me and smiled, I smiled back and told him I'm going home the right way, not the wrong way because I'm an innocent man. As we exited the office there was a dog laying on the floor by the exit door, I called it with a kiss sound, then returned to the van on the way back to prison.

These are not the actions of a guilty man!!

A murderer without a date to ever go home!

A guilty prisoner with life without the possibility to ever go home would have took advantage of this opportunity to get free!

He would have killed Mr. [REDACTED], retrieved his gun, vest, and killed whatever else threatened his goal of escape!

A true murderer doesn't fear murdering again, whenever the opportunity arrives to apprehend a gun to get free he will without fear!

I am an innocent man!!! Officer [REDACTED]'s life was in my hands this day and several more lives as well.

I am a great man.

I did not commit a guilty act! I committed an act of innocence by bringing it to Mr. [REDACTED]'s attention.

With the hope, and faith of God that one day the truth will be revealved about my case/plea for justice!

If I was the murderer of which I am accused of being, then why did I not murder again when I had the opportunity to in order to get free?

When I have no out date at all! If I was guilty of this murder why didn't the state witnesses report it on the day that it happened, instead of a year later when they got in trouble? The record states that I have nothing to lose! Well, why didn't I escape if I had/have nothing to lose? I know why: It's because I have a lot to lose, and a whole lot to gain!

I have love to gain, freedom to gain, respect to gain. I am destined to show America that I am and can be a productive citizen of America!

I have courage, honor, I am brave when it comes to making the right decisions!

I love not only self, but all walks of life including officer [REDACTED]. I believe in those that don't believe in me!

I will protect those that wouldn't protect me! I will save the lives of those who think I will take their lives!

I feel a great level of sympathy for the family of Mr. Jason [REDACTED] and truly despise the fact that they haven't gotten true justice regarding the demise of Mr. [REDACTED].

I pray and believe that the murderer will one day surface, and be held accountable for the evil dees in which he inflicted upon the Hall family, and the Frost family!

I don't regret being in prison for the time I have spent. Prison has molded me in ways that most young men needs to be molded, that don't have fathers to lead them towards their full potential of success/manhood!

My conduct of this enviroment hasn't been the greatest; because of the diabolical people & events that sustain, it won't allow change to reflect fully externally. So I've learned to conceal it internally until my conditions change for the best! I have a goal to accomplish; my goal is to prove to the world that I am not a murderer!

I am a growing young man that's been victimized by the Mo. Penal System, and so has the Hall family, because still theres injustice!!!

America What If?
Officer [REDACTED] would have spotted the loaded revolver before I did? And seen me standing beside it urinating & got paranoid, then drew his 30 shot 40 caliber automatic hand gun and killed me. Assuming that I would have reached for it to harm him in a plot to escape, when my intentions were harmless and most of all controlled by the truth that dwells deep within my heart & mind!

Would the truth of me being murdered ever surface? Or would it have been swept under the rug with false stories being told to my family, like the [REDACTED] family?

The truth of this matter is that the homicide of me would have been justified, but if I would have brutally murdered correctional officer Mr. [REDACTED] it wouldn't have been justified, but only glorified by the meteor, and memorized by the world!!! Why aren't my actions of truth being glorified? And would anyone ever remember the righteous decision that I, Mr. John Lee Frost 3rd made on 10-20-10?

Or would the world continue to view me as the murderer that I was falsely accused of being? I've been labeled as a zero; how could this be? When I exited my mothers womb as being her little HERO!!!