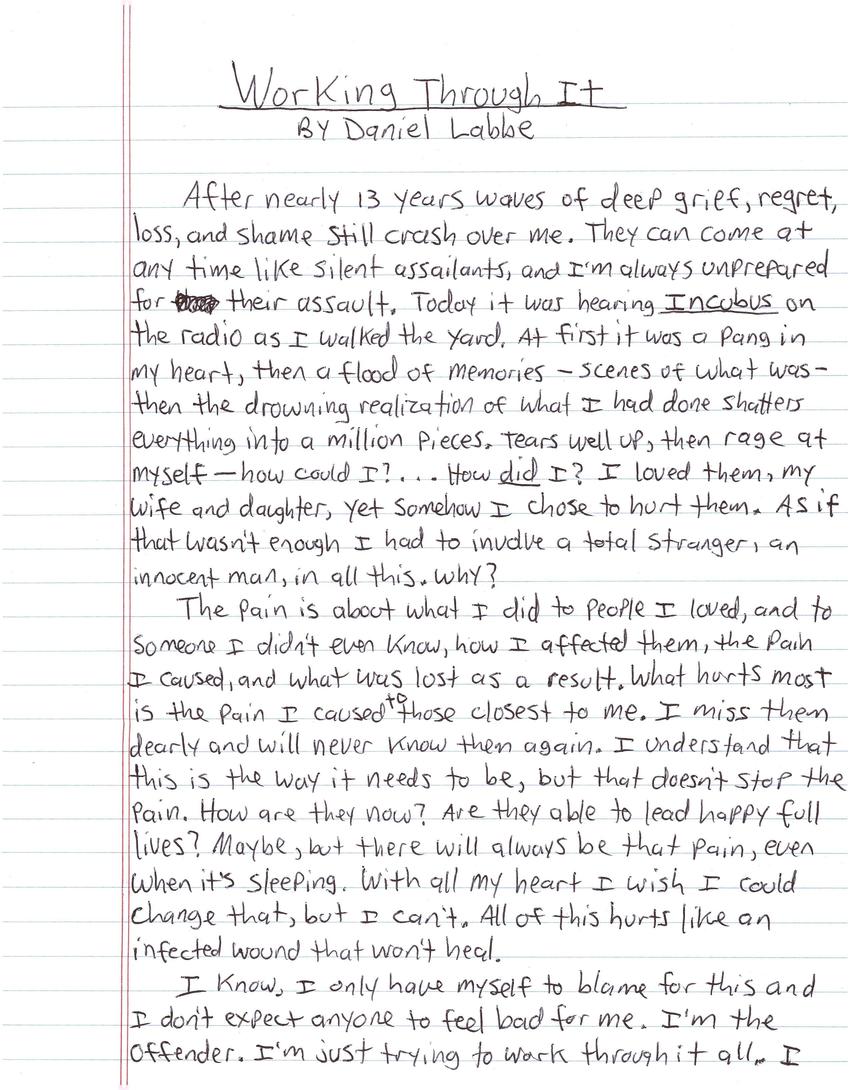 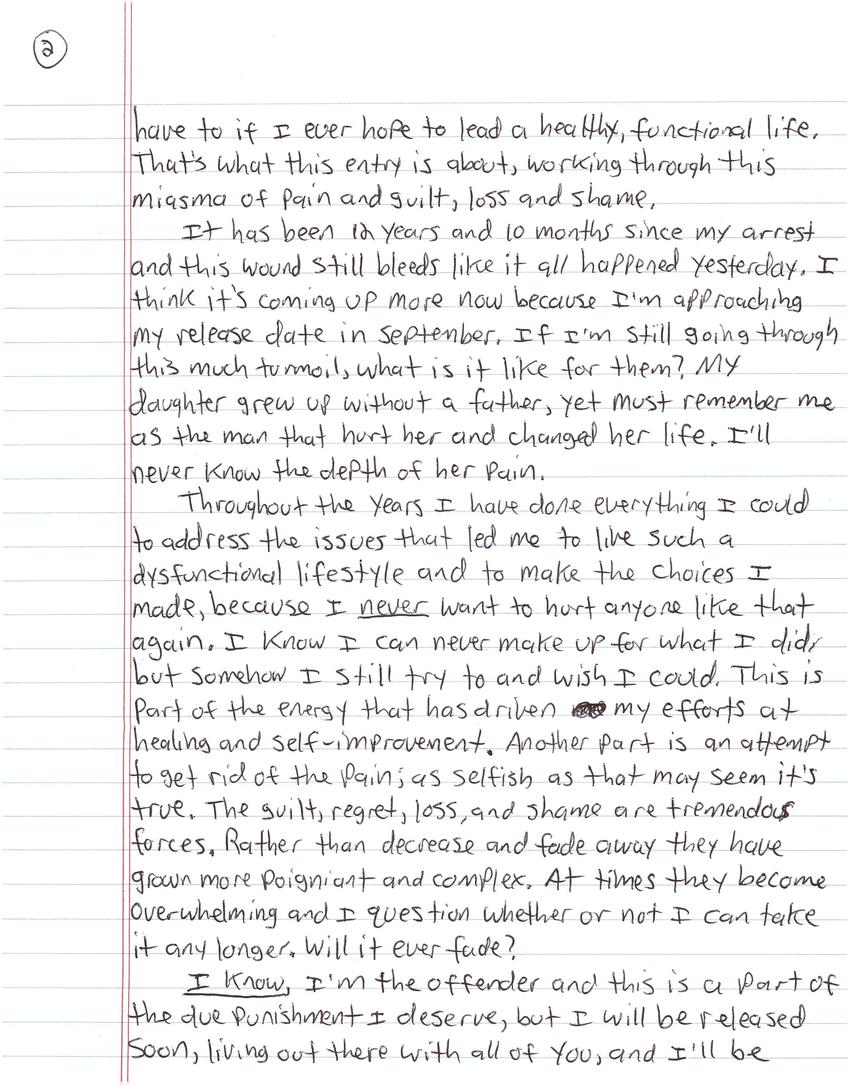 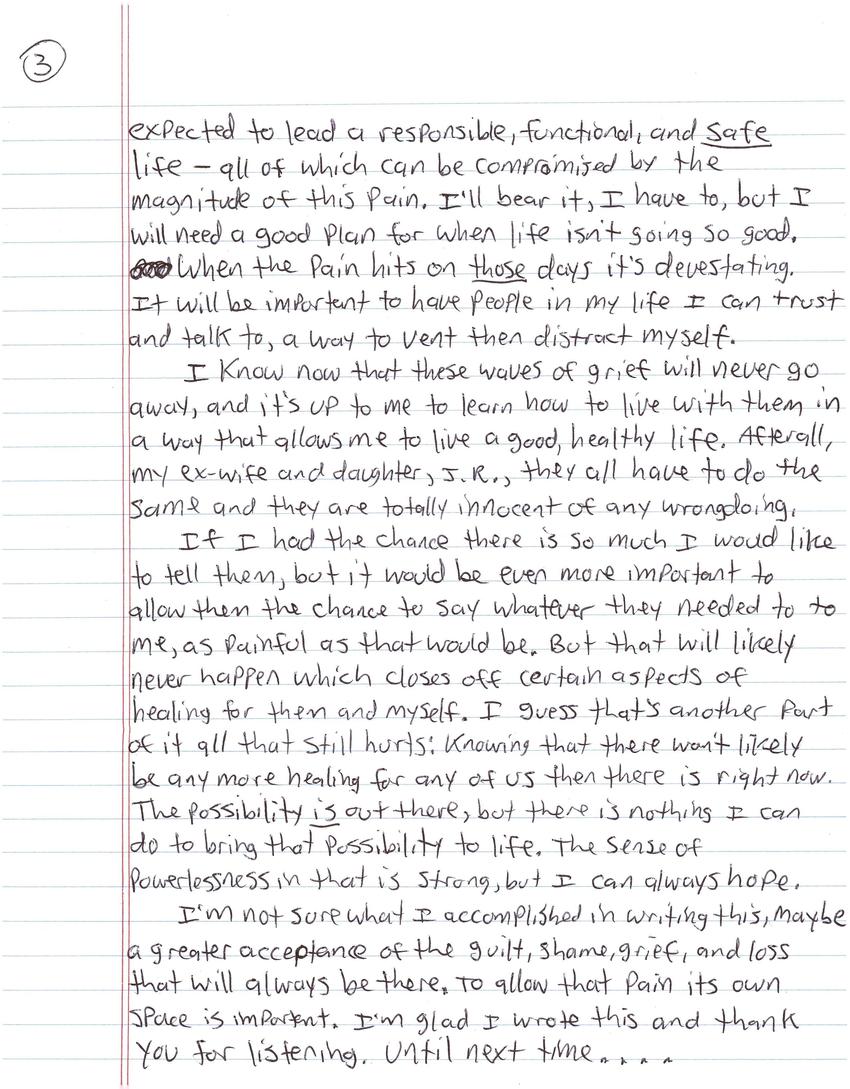 Working Through It by Daniel Labbe
After nearly 13 years waves of deep grief, regret, loss, and shame still crash over me. They can come at any time like silent assailants, and I'm always unprepared for their assault. Today it was hearing Incubus on the radio as I walked the yard. At first it was a pang in my heart, then a flood of memories - scenes of what was then the drowning realization of what I had done shatters everything into a million pieces. Tears well up, then rage at myself - how could I?.... How did I? I loved them, my wife and daughter, yet somehow I chose to hurt them. As if that wasn't enough I had to involve a total stranger, an innocent man in all this. Why?
The pain is about what I did to people I loved, and to someone I didn't even know. How I affected them, the pain I caused, and what was lost as a result. What hurts most is the pain I caused to those closest to me. I miss them dearly and will never know them again. I understand that this is the way it needs to be, but that doesn't stop the pain. How are they now? are they able to lead happy, full lives? Maybe, but there will always be that pain, even when it's sleeping. With all my heart I wish I could change that, but I can't. All of this hurts like an infected wound that won't heal.
I know, I only have myself to blame for this and I don't expect anyone to feel bad for me. I'm the offender. I'm just trying to work through it all. I have to if I ever have hope to lead a healthy, functional like. That's what this entry is about, working through this miasma of pain and guilt, loss and shame.
It has been 12 years and 10 months since my arrest and this wound still bleeds like it all happened yesterday. I think it's coming up more now because I'm approaching my release date in September. If I'm still going through this much turmoil, what is it like for them? My daughter grew up without a father, yet must remember me as the man that hurt her and changed her life. I'll never know the depth of her pain.
Throughout the years I have done everything I could to address the issues that led me to live such a dysfunctional lifestyle and to make the choices I made, because I never want to hurt anyone like that again. I know I can never make up for what I did, but somehow I still try to and wish I could. This is part of the energy that has driven my efforts at healing and self-improvement. Another part is a attempt to get rid of the pain; as selfish as that may seem it's true. The guilt, regret, loss, and shame are tremendous forces. Rather than decrease and fade away, they have grown more poignant and complex. At times they become overwhelming and I question whether or not I can take it any longer. Will it ever fade?
I know, I'm the offender and this is a part of the due punishment I deserve, but I will be released soon, living out there with all of you, and I'll be expected to lead a responsible, functional, and safe life - all of which can be compromised by the magnitude of this pain. I'll bear it, I have to, but I will need a good plan for when life isn't going so good. When the pain hits on those days it's devastating. It will be important to have people in my life I can trust and talk to, a way to vent then distract myself.
I know that these waves of grief will never go away, and it's up to me to learn how to live with them in a way that allows me to live a good, healthy life. Afterall, my ex-wife and daughter, J.R., they all have to do the same and they are totally innocent of any wrongdoing.
If I had the chance there is so much I would like to tell them, but it would be even more important to allow them the chance to say whatever they needed to me, as painful as that would be. But that will likely never happen which closes off certain aspects of healing for them and myself. I guess that's another part of it all that still hurts: knowing that there won't likely be any more healing for any of us then there is right now. The possibility is out there, but there is nothing I can do to bring that possibility to life. The sense of powerlessness in that is strong, but I can always hope.
I'm not sure what I accomplished in writing this, maybe a greater acceptance of the guilt, shame, grief, and loss that will always be there. To allow that pain its' own space is important. I'm glad I wrote this and thank you for listening. Until next time...

I am not sure what to say besides: I am listening. I feel your pain with you. I know the feeling of wanting to heal with someone, and having to heal on your own - and that powerlessness of not knowing how/if their healing is going.

I don't want to interfere with the important process of acceptance, but some thoughts that also came to mind were: How can you use this pain to accomplish your goals of living a functional, responsible, and safe life? How can you help people *like* your ex-wife and daughter to heal, with the idea that that means someone out there is helping them heal too? 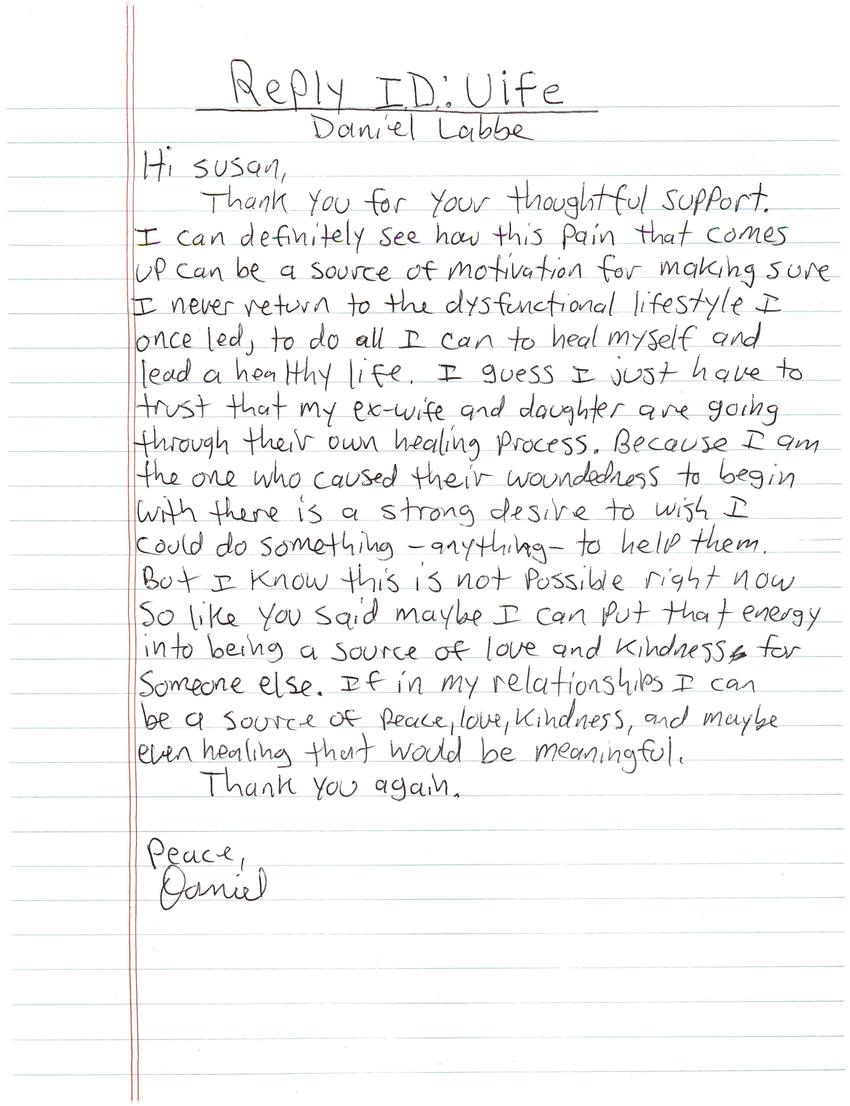 Hi Daniel, I was happy to find this blog when I googled your name - I have not heard from you via snail mail since I sent you a card and wondered if you ever got it and/or if you had been released... I will try writing again, soon. I have found a sangha in the tradition of Thich Nhat Hanh in my new area - that I meditate with weekly. I have also become a member of Refuge Recovery that was founded by Noah Levine who wrote "Dharma Punx." It is good to have a recovery community based on the 4 Noble Truths of the Buddha.
Hope you are well - really good to find you here!
Sending metta your way,
Susan