Trump, Brexit, and the Left's Response 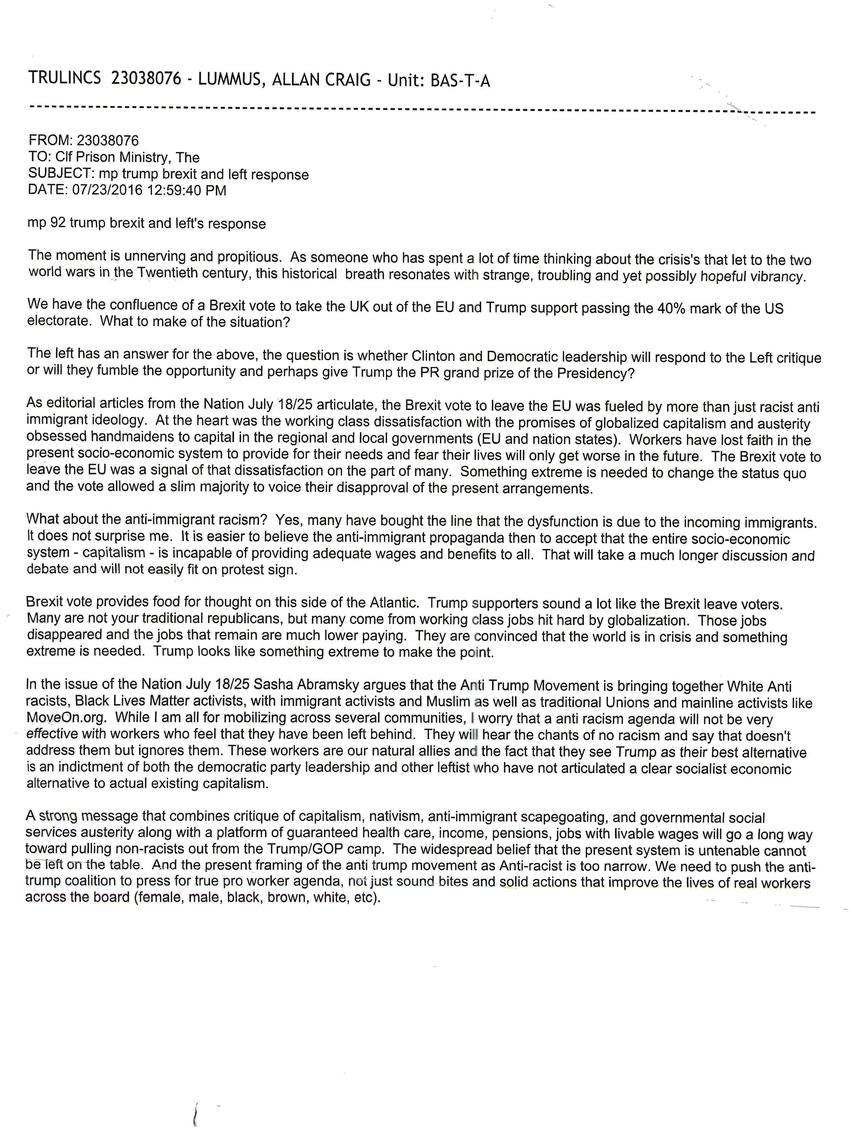 The moment is unnerving and propitious. As someone who has spent a lot of time thinking about the crises that led to the two world wars in the twentieth century, this historical breath resonates with strange, troubling and yet possible hopeful vibrancy.

We have the confluence of a Brexit vote to take the UK out of the EU and Trump support passing the 40% mark of the US electorate. What to make of the situation?

The left has an answer for the above, the question is whether Clinton and Democratic leadership will respond to the Left critique or will they fumble the opportunity and perhaps give Trump the PR grand prize of the presidency?

As editorial articles from the Nation July 18/25 articulate, the Brexit vote to leave the EU was fueled by more than just racist anti-immigrant ideology. At the heart was the working class dissatisfaction with the promises of global capitalism and austerity obsessed handmaidens to capital in the regional and local governments (EU and nation states). Workers have lost faith in the present socio-economic system to provide for their needs and fear their lives will only get worse in the future. The Brexit vote to leave the EU was a signal of that dissatisfaction on the part of many. Something extreme is needed to change the status quo and the vote allowed a slim majority to voice their disappointment of the present arrangements.

What about the anti-immigrant racism? Yes, many have bought the line that the dysfunction is due to the incoming immigrants. It does not surprise me. It is easier to believe the anit-immigrant propaganda than to accept that the entire socio-economic system—capitalism—is incapable of providing adequate wages and benefits to all. That will take a much longer discussion and debate and will not easily fit on a protest sign.

Brexit vote provides food for thought on this side of the Atlantic. Trump supporters sound a lot like the Brexit leave voters. Many are not your traditional Republicans, but many come from working class jobs hit hard by globalization. Those jobs disappeared and the jobs that remain are much lower paying. They are convinced that the world is in crisis and something extreme is needed. Trump looks like something extreme to make the point.

In the issue of the Nation July 18/25 Sasha Abramsky argues that the Anti Trump Movement is bringing together White anti-racists, Black Lives Matter activists, with immigrant activists and Muslim as well as traditional unions and mainline activists like MoveOn.org. While I am all for mobilizing across several communities, I worry that an anti-racism agenda will not be very effective with workers who feel that they have been left behind. They will hear the chants no racism and say that doesn't address them, but ignores them. These workers are our natural allies and the fact that they see Trump as their best alternative is an indictment of both the Democratic party leadership and other Leftists who have not articulated a clear socialist economic alternative to actual existing capitalism.

A strong message that combines critique of capitalism, nativism, anti-immigrant scapegoating, and governmental social services austerity along with a platform of guaranteed health care, income, pensions, jobs with livable wages will go a long way toward pulling non-racists out from the Trump/GOP camp. The widespread belief thatthe present system is untenable cannot be left on the table. And the present framing of the Anti Trump Movement as anti-racist is too narrow. We need to push the anti-Trump coalition to press for true pro worker agenda, not just sound bites and solid actions that improve the lives of real workers across the board (female, male, black, brown, white, etc.).