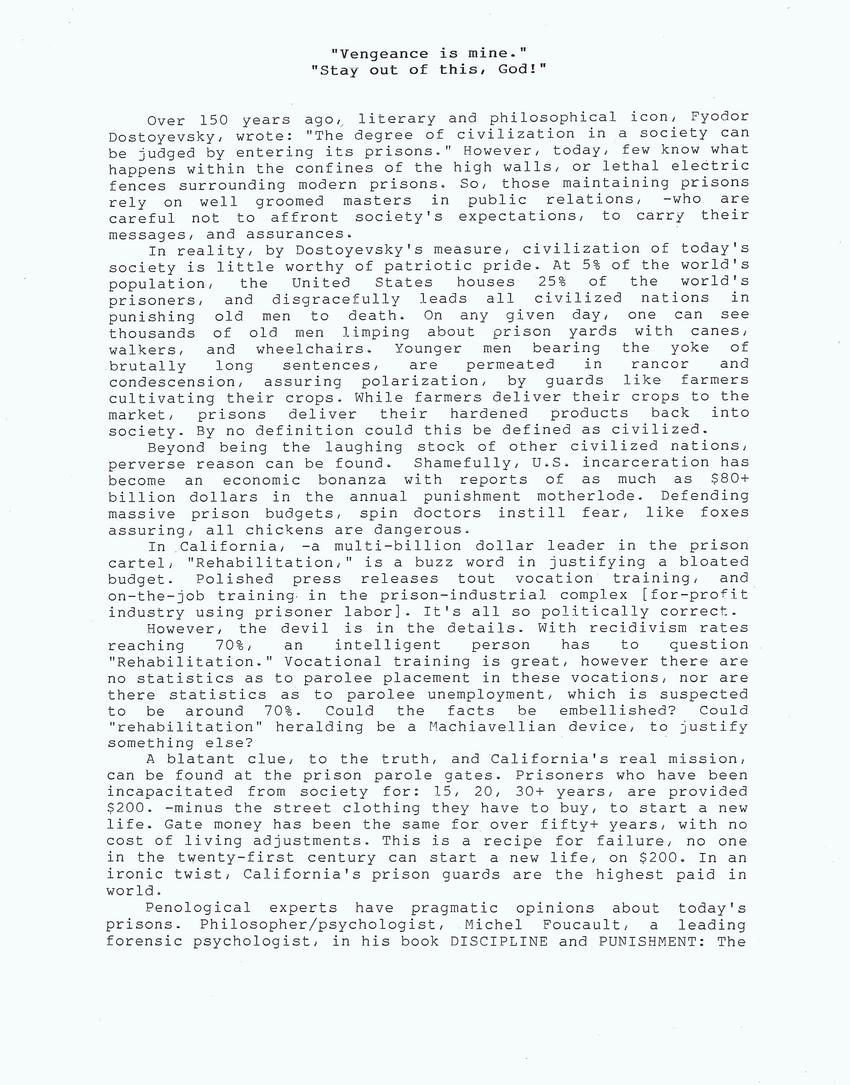 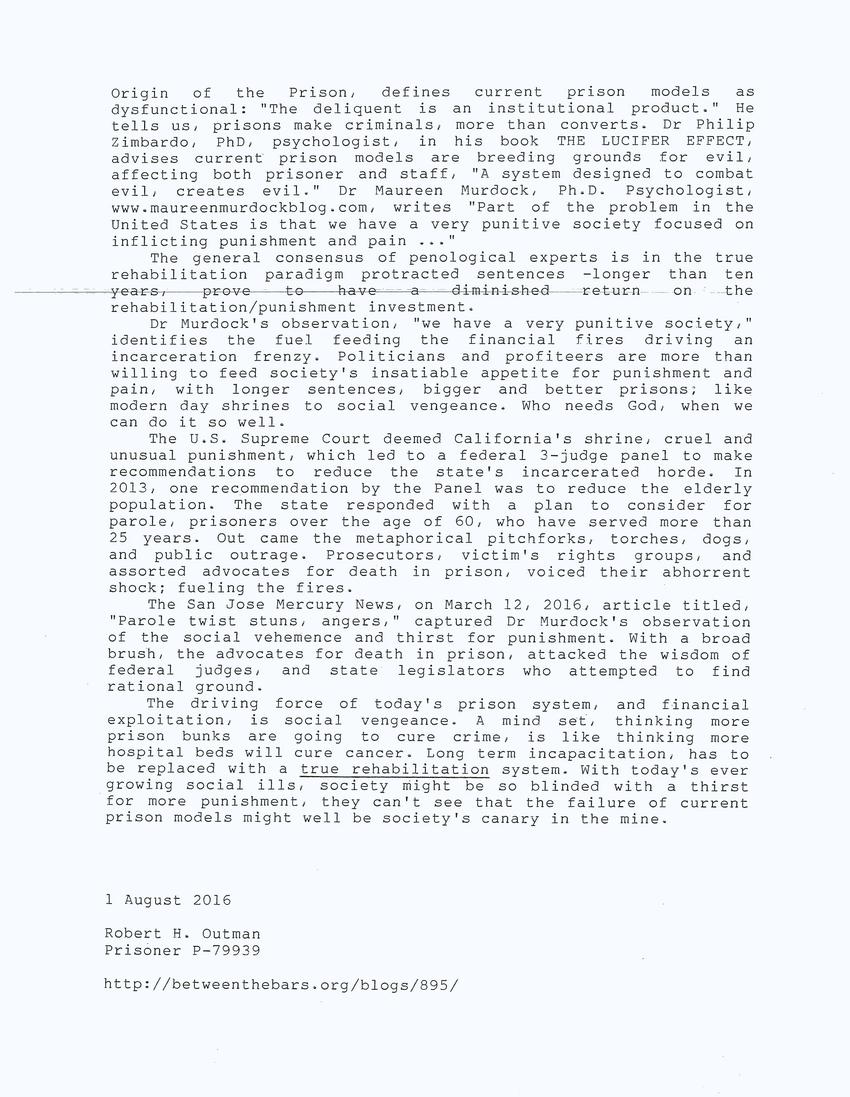 Over 150 years ago, literary and philosophical icon Fyodor Dostoevsky wrote, "The degree of civilization in a society can be judged by entering its prisons." However, today few know what happens within the confines of the high walls or lethal electric fences surrounding modern prisons. So those maintaining prisons rely on well groomed masters in public relations, who are careful to affront society's expectations, to carry their messages and assurances.

In reality, by Dostoevsky's measure, civilization of today's society is little worthy of patriotic pride. At 5% of the world's population, the United States houses 25% of the world's prisoners and disgracefully leads all civilized nations in punishing old men to death. On any given day, one can see thousands of old men limping about prison yards with canes, walkers, and wheelchairs. Younger men bearing the yoke of brutally long sentences are permeated in rancor and condensation, assuring polarization, by guards like farmers cultivating their crops. While farmers deliver their crops to the market, prisons deliever their hardened products back into society. By no definition could this be defined as civilized.

Beyond being the laughing stock of other civilized nations, perverse reason can be found. Shamefully, U.S. incarceration has become an economic bonanza with reports as much as 80+ billion dollars in the annual punishment mother lode. Defending massive prison budgets, spin doctors instill fear, like foxes assuring all chickens are dangerous.

In California —a multi-billion dollar leader in the prison cartel— "rehabilitation" is a buzz word in justifying a bloated budget. Polished press releases toot vocation training and on-the-job training in the prison-industrial complex (for-profit industry using prisoner labor). It's all so politically correct.

However, the devil is in the details. With recidivism rates reaching 70%, an intelligent person has to question "rehabilitation." Vocational training is great; however, there are no statistics as to parolee placement in these vocations nor are there statistics as to parolee unemployment, which is suspected be around 70%. Could the facts be embellished? Could "rehabilitation" heralding be a Machiavellian device to justify something else?

A blatant clue to the truth and California's real mission can be found at the prison parole gates. Prisoners who have been incapacitated from society for 15, 20, 30+ years are provided $200—minus the street clothing they have to buy—to start a new life. Gate money has been the same for over fifty years with no cost of living adjustments. This is a recipe for failure; no one in the twenty-first century can start a new life on $200. In an ironic twist, California's prison guards are the highest paid in the world.

Penological experts have pragmatic opinions about today's prisons. Philosopher/psychologist Michel Foucault, a leading forensic psychologist, in his book Discipline and Punishment: The Origin of The Prison defines current prison models as dysfunctional: "The delinquent is an institutional product." He tells us prisons make criminals more than coverts. Dr. Philip Zimbardo, Ph.D. psychologist, in his book The Lucifer Effect advises current prison models are breeding grounds for evil, affecting both prisoner and staff. "A system designed to combat evil, creates evil." Dr. Maureen Murdock, Ph.D. psychologist, www.maureenmurdockblog.com, writes, "Part of the problem in the United States is that we have a very punitive society focused on inflicting punishment and pain..."

The general consensus of penological experts is in the true rehabilitation paradigm protracted sentences longer than ten years prove to have a diminished return on the rehabilitation/punishment investment.

Dr. Murdock's observation, "we have a punitive society," identifies the fuel feeding the financial fires driving an incarceration frenzy. Politicians and profiteers are more than willing to feed society's insatiable appetite for punishment and pain with longer sentences and bigger and better prisons, like modern day shrines to social vengeance. Who needs God when we can do it so well.

The U.S. Supreme Court deemed California's shrine, cruel and unusual punishment, which led to a federal 3-judge panel to make recommendations to reduce the state's incarcerated horde. In 2013, one recommendation by the panel was to reduce the elderly population. The state responded with a plan to consider for parole prisoners over the age of 60 who have served more than 25 years. Out came the metaphorical pitchforks, torches, dogs, and public outrage. Prosecutors, victims' rights groups, and assorted advocates for death in prison voiced their abhorrent shock, fueling the fires.

The San Jose Mercury News on March 12, 2016 article titled "Parole twist stuns, angers" captures Dr. Murdock's observation of the social vehemence and thirst for punishment. With a broad brush, the advocates for death in prison attacked the wisdom of federal judges and state legislators who attempted to find rational ground.

The driving force of today's prison system and financial exploitation is social vengeance. A mind set thinking more prison bunks are going to cure crime is like thinking more hospital beds will cure cancer. Long term incapacitation has to be replaced with a true rehabilitation system. With today's ever growing social ills, society might be so blinded with a thirst for more punishment that they can't see that the failure of current prison models might as well be society's canary in the mine.

Hi Robert,
well written. In reaction, I do not know much about Machiavelli, but it sounds he might have written "1984" (doublespeak).
Then Foucault, unfortunately, isn't alive anymore, the book you quote is from 1975, also he died young. This is the beginning on him on wikipedia:

Michel Foucault (French: [miʃɛl fuko]; born Paul-Michel Foucault, 15 October 1926 – 25 June 1984) was a French philosopher, historian of ideas, social theorist, philologist and literary critic. His theories addressed the relationship between power and knowledge, and how they are used as a form of social control through societal institutions. Though often cited as a post-structuralist and postmodernist, Foucault rejected these labels, preferring to present his thought as a critical history of modernity. His thought has been highly influential both for academic and for activist groups, such as within post-anarchism.
Have a good day and keep on writing Robert! Julia