Sons Who Become Their Father 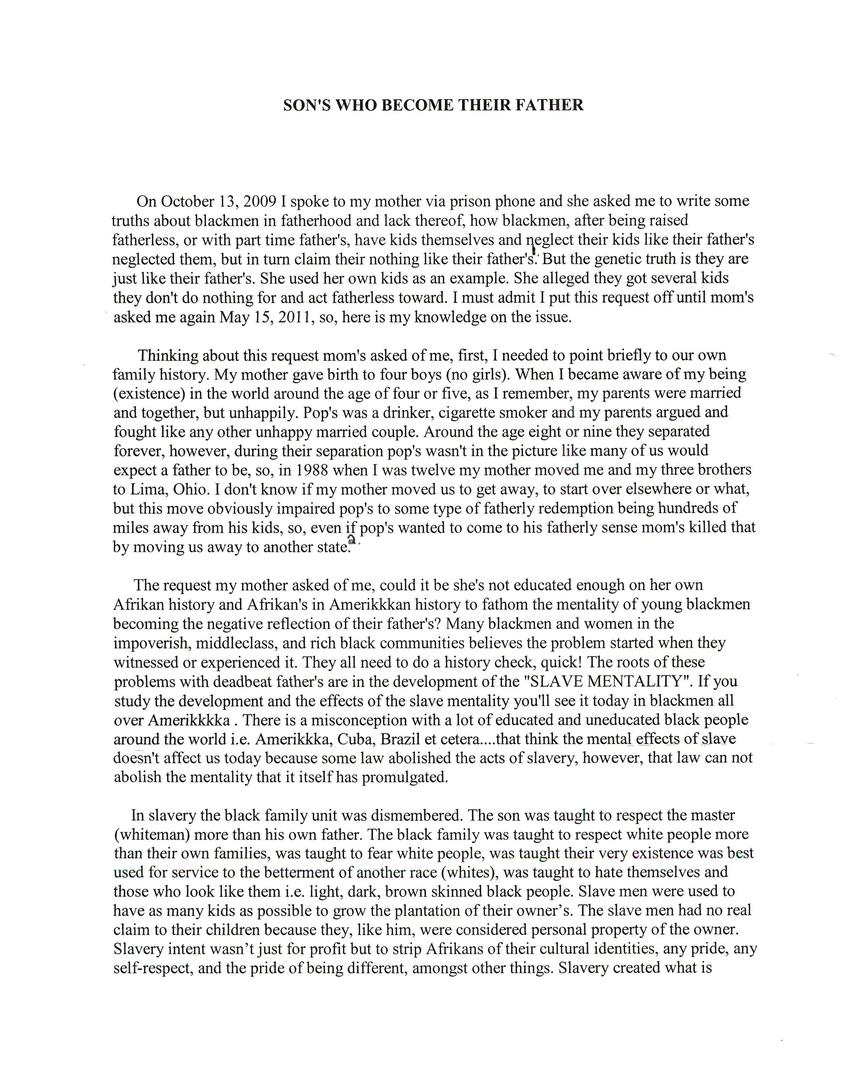 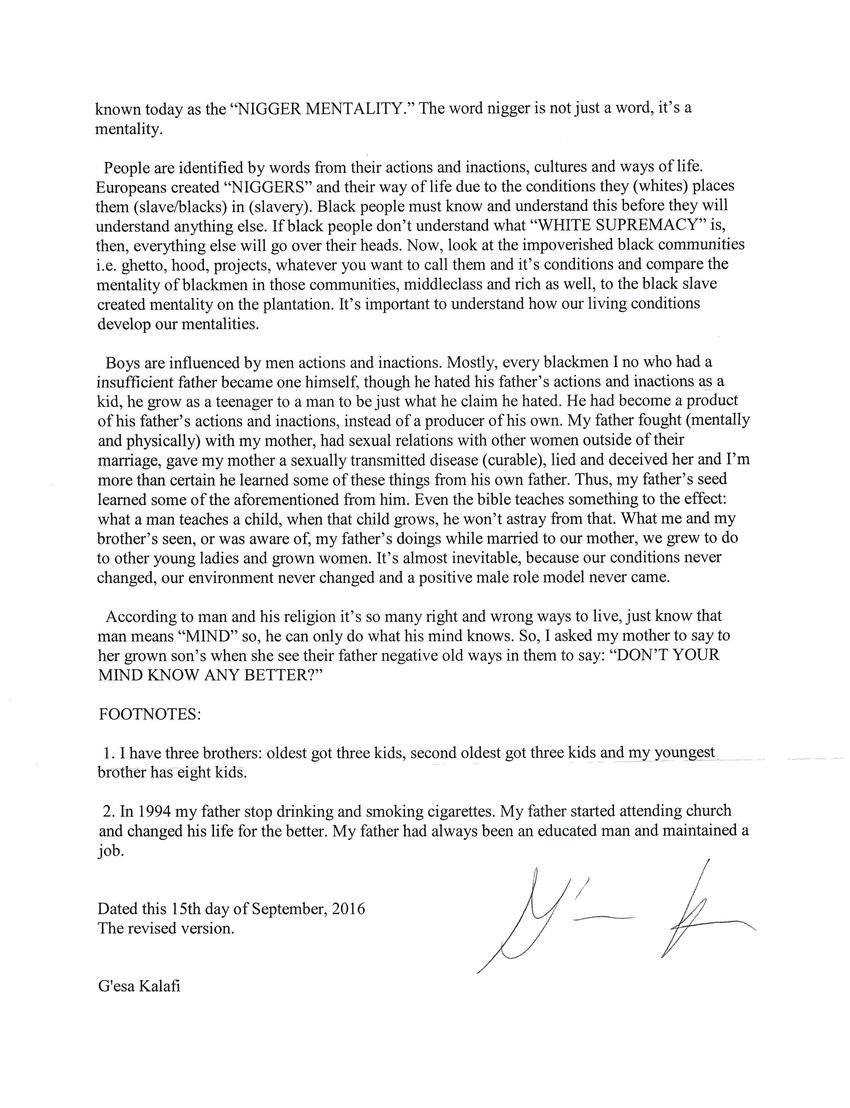 SON'S WHO BECOME THEIR FATHER

On October 23, 2009 I spoke to my mother via prison phone and she asked me to write some
truths about blackmen in fatherhood and lack therof, how blackmen, after being raised
fatherless, or with part time father's, have kids themselves and neglect their kids like their father's
neglected them, but in turn claim their nothing like their father's. But the genetic truth is they are
just like their father's. She used her own kids as an example. She alleged they got several kids
they don't do nothing for and act fatherless toward. I must admit I put this request off until mom's
asked me again May 15, 2011, so, here is my knowledge on the issue.

Thinking about this request mom's asked of me, first, I needed to point briefly to our own
family history. My mother gave birth to four boys (no girls). When I became aware of my being
(existance) in the world around the age of four or five, as I remember, my parents were married
and together, but unhappily. Pop's was a drinker, cigarette smoker and my parents argued and
fought like any other unhappy married couple. Around the age eight or nine they separated
forever, however, during their separation pop's wasn't in the picutre like many of us would
expect a father to be, so in 1988 when I was twelve my mother moved me and my three brothers
to Lima, Ohio. I don't know if my mother moved us to get away, to start over elsewhere or what,
but this move obviously impaired pop's to some type of fatherly redemption being hundreds of
miles away from his kids, so, even if pop's wanted to come to his fatherly sense mom's killed that
by moving us away to another state.

The request my mother asked of me, could it be she's not educated enough on her own
Afrikan history and Afrikan's in Amerikkkan history to fathom the mentality of young blackmen
becoming the negative reflection of their father's? Many blackmen and women in the
impoverish, middleclass, and rich black communities believes the problem started when they
witnessed or experienced it. They all need to do a history check, quick! The roots of these
problems with deadbeat father's are in the development of the "SLAVE MENTALITY". If you
study the development and the effects of the slave mentality you'll see it today in blackmen all
over Amerikkkka. There is a misconception with a lot of educated and uneducated black people
around the world i.e. Amerikka, Cuba, Brazil et cetera....that think the mental effects of slave
doesn't affect us today because some law abolished the acts of slavery, however, that law can not
abolish the mentality that it itself has promulgated.

In slavery the black family unit was dismembered. The son was taught to respect the master
(whiteman) more than his own father. The black family was taught to respect white people more
than their own families, was taught to fear white people, was taught their very existence was best
used for service to the betterment of another race (whites), was taught to hate themselves and
those who look like them i.e. light, dark, brown skinned black people. Slave men were used to
have as many kids as possible to grow the plantation of their owner's. The slave men had no real
claim to their children because they, like him, were considered personal property of the owner.
Slavery intent wasn't just for profit but to strip Afirkans of their cultural identities, any pride, any
self-respect, and the pride of being different, amongst other things. Slavery created what is
known today as the "NIGGER MENTALITY." The word nigger is not just a word, it's a mentality.

People are identified by words from their actions and inactions, cultures and ways of life.
Europeans created "NIGGERS" and their way of life due to the conditions they (whites) places
them (slaves/blacks) in (slavery). Black people must know and understand this before they will
understand anything else. If black people don't understand what "WHITE SUPREMACY" is,
then, everything else will go over their heads. Now, look at the impoverished black communities
i.e. ghetto, hood, projects, whatever you want to call them and it's conditions and compare the
mentality of blackmen in those communities, middleclass and rich as well, to the black slave
created mentality on the plantation. It's important to understand how our living conditions
develop our mentalities.

Boys are influence by men actions and inactions. Mostly, every blackmen I no who had a
insufficient father became one himself, though he hated his father's actions and inactions as a
kid, he grow as a teenager to a man to be just what he claim he hated. He had become a product
of this father's actions and inactions, instead of a producer of his own. My father fought(mentally
and physically) with my mother, had sexual relations with other women outside of their
marriage, gave my mother a sexually transmitted disease (curable), lied and deceived her and I'm
more than certain he learned some of these things from his own father. Thus, my father's seed
learned some of the aforementioned from him. Even the bible teaches something to the effect:
what a man teaches a child, when that child grows, he won't astray form that. What me and my
brother's seen, or was aware of, my father's doing while married to our mother, we grew to do
to other young ladies and grown women. It's almost inevitable, because our conditions never
changed, our environment never changed and a positive male role model never came.

According to man and his religion it's so many right and wrong ways to live, just know that
man means "MIND" so, he can only do what his mind knows. So, I asked my mother to say to
her grown son's when she see their father negative old ways in the to say: "DON'T YOUR
MIND KNOW ANY BETTER?"

2. In 1994 my father stop drinking and smoking cigarettes. My father started attending church
and changed his life for the better. My father had always been an educated man and maintained a job.

Dated this 15th day of September, 2016
The revised version.