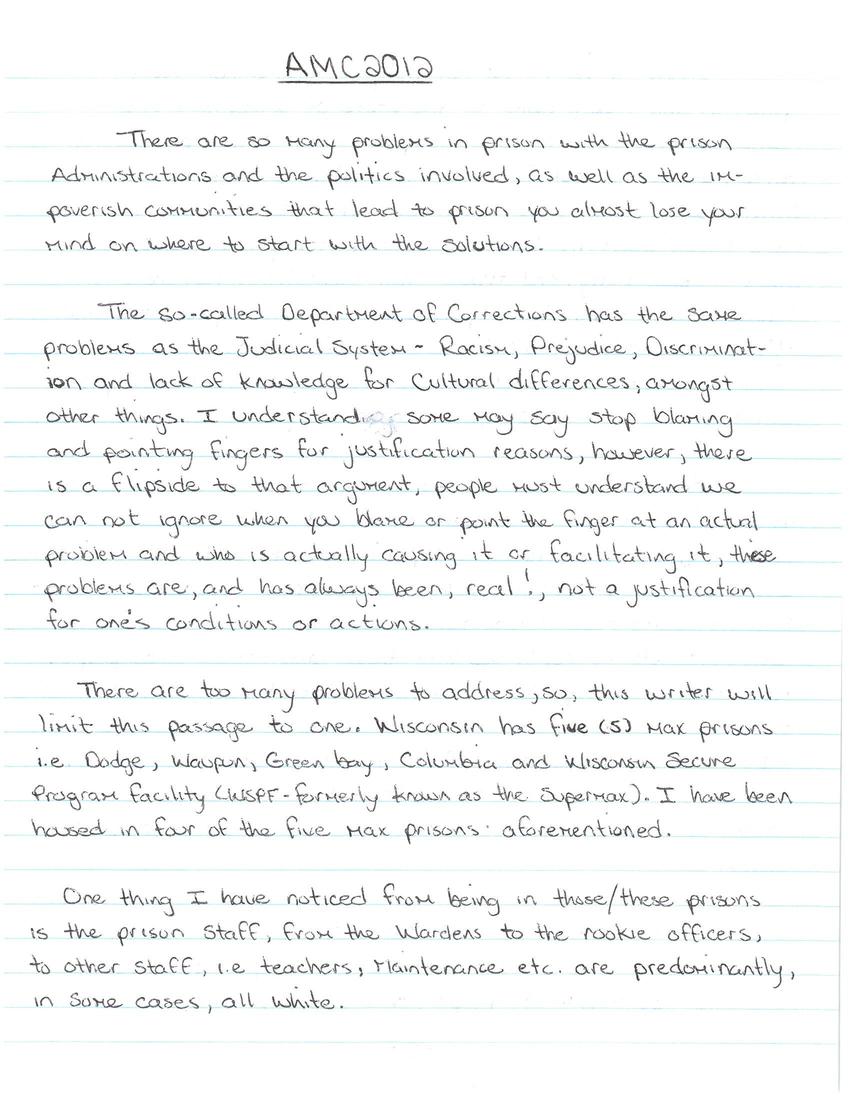 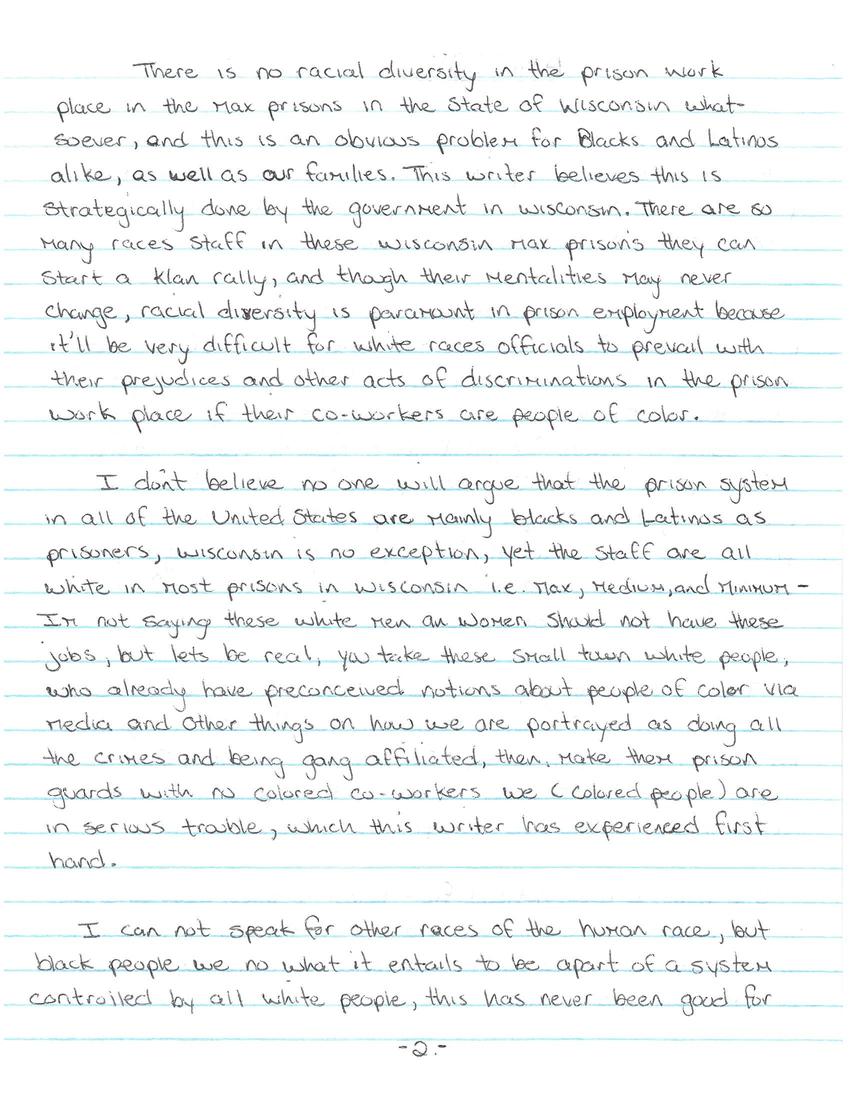 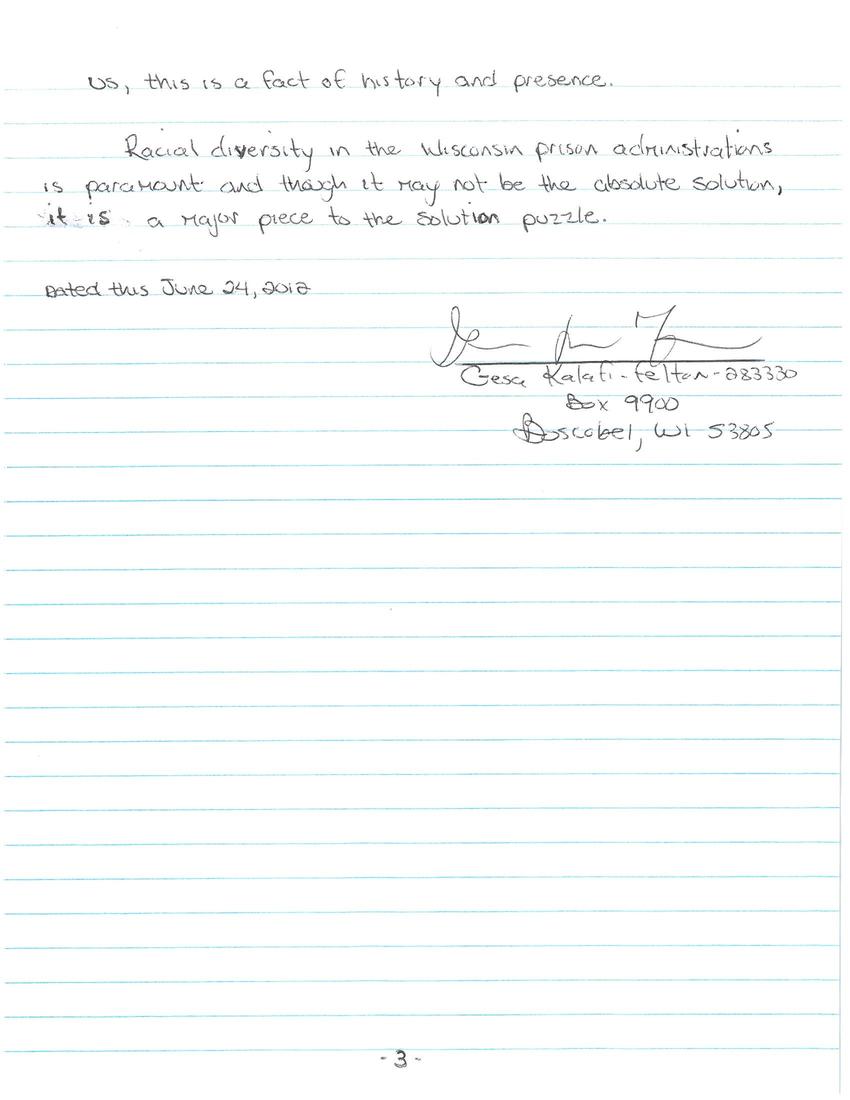 There are so many problems in prison with the prison Administrations and the politics involved, as well as the impoverished communities that lead to prison you almost lose your mind on where to start with the solutions.

The so-called Department of Corrections has the same problems as the Judicial System - Racism, Prejudice, Discrimination and lack of knowledge for cultural differences, amongst other things. I understand some may say stop blaming and pointing fingers for justification reasons, however, there is a flipside to that argument, people must understand we can not ignore when you blame or point the finger at an actual problem and who is actually causing it or facilitating it, these problems are and have always been, real!, not a justification for one's conditions or actions.

There are too many problems to address, so, this writer will limit this passage to one. Wisconsin has five (5) max prisons i.e Dodge, Waupun, Green Bay, Columbia and Wisconsin Secure Program facility (WSPF-formerly known as the Supermax). I have been housed in four of the five max prisons aforementioned.

One thing I have noticed from being in those/these prisons is the prison staff, from the Wardens to the rookie officers, to other staff, i.e teachers, maintenance etc. are predominantly, in some cases, all white.

There is no racial diversity in the prison work place in the max prisons in the State of Wisconsin whatsoever, and this is an obvious problem for Blacks and Latinos alike, as well as our families. This writer believes this is strategically done by the government in Wisconsin. There are so many races staff in these Wisconsin max prisons they can start a Klan rally, and though their mentalities may never change, racial diversity for white races officials to prevail with their prejudices and other acts of discrimination in the prisons work place if their co-workers are people of color.

I don't believe no one will argue that the prison system in all of the United States are mainly blacks and Latinos as prisoners, Wisconsin is no exception, yet the staff re all white in most prisons in Wisconsin i.e. Max, Medium, and Minimum - I'm not saying these white men and women should not have these jobs, but lets be real, you take these small town white people, who already have preconceived notions about people of color via media and other things on how we are portrayed as doing all the crimes and being gang affiliated, then, make them prison guards with no colored co-workers we (colored people) are in serious trouble, which this writer has experienced first hand.

I can not speak for other races of the human race, but black people we no what it entails to be apart of a system controlled by all white people, this has never been good for us, this is a fact of history and presence.

Racial diversity in the Wisconsin prison administrations is paramount and though it may not by the absolute solution, it is a major piece to the solution puzzle.
Dated this June 24, 2012
Gesa Kalafi-felton-283330
Box 9900
Doscobel, WI 58305