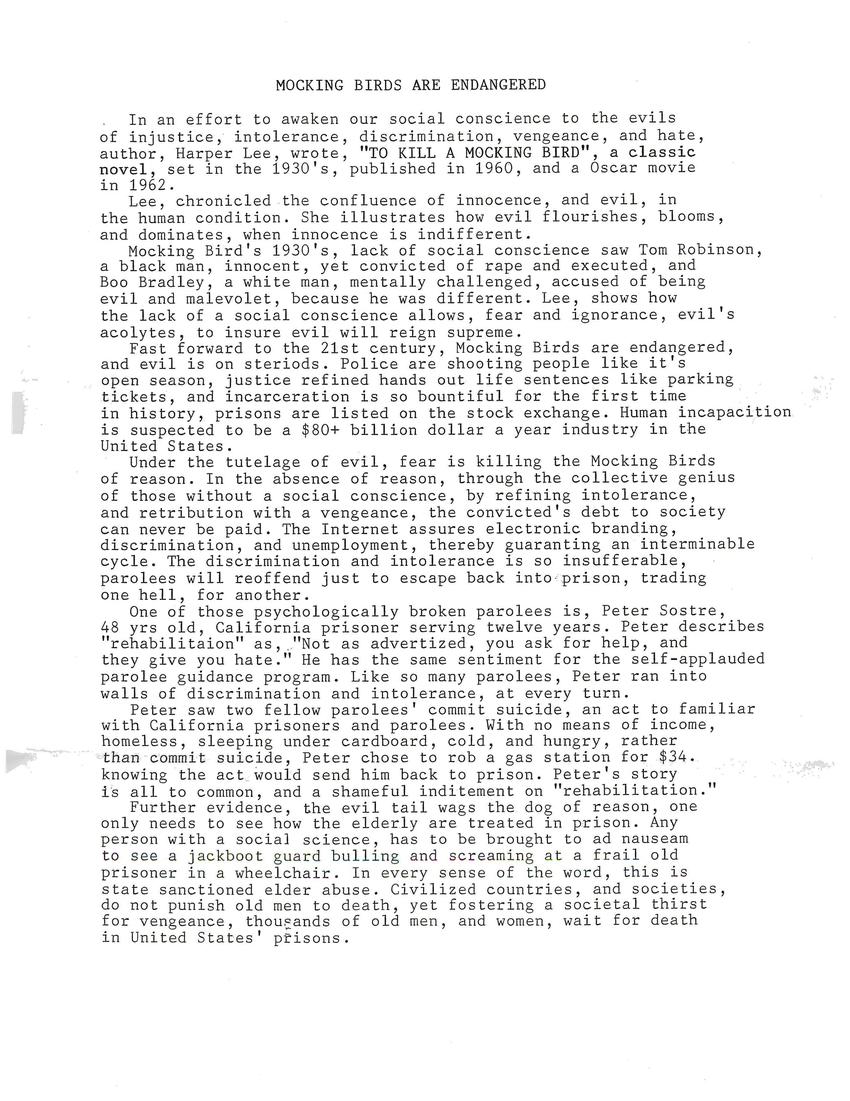 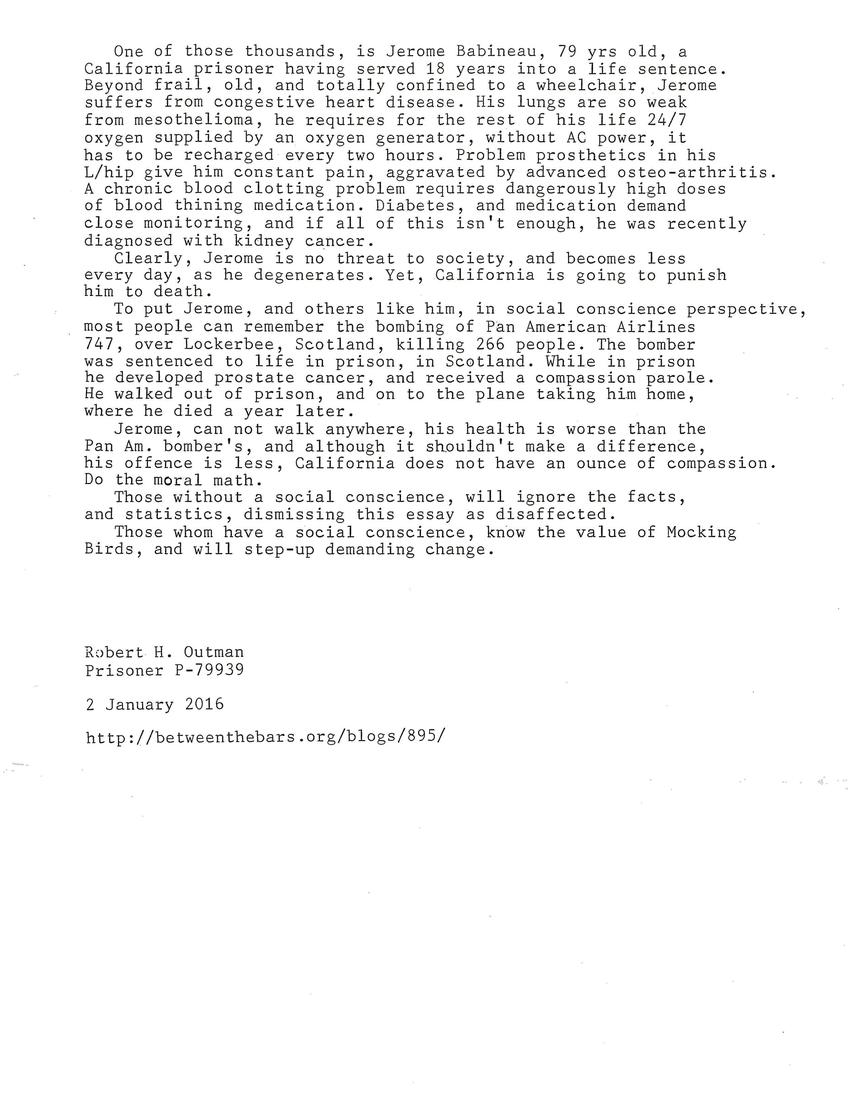 In an effort to awaken our social conscience to the evils of injustice, intolerance, discrimination, vengeance, and hate, author Harper Lee wrote To Kill A Mockingbird, a classic novel set in the 1930s. It was published in 1960 and made into an Oscar movie in 1962.

Lee chronicled the confluence of innocence and evil in the human condition. She illustrated how evil flourishes, blooms and dominates when innocence is indifferent.

Mockingbird's 1930s lack of social conscience saw Tom Robinson, an innocent black man, convicted of rape and executed. Boo Bradley, a mentally challenged white man, was accused of being evil and malevolent only because he was different. Lee shows how the lack of a social conscience allows fear and ignorance, evil's acolytes, to insure evil will reign supreme.

Fast-forward to the 21st century. Mockingbirds are endangered and evil is on steroids. Police are shooting people like it's open season, justice refined hands out life sentences like parking tickets, and incarceration is so bountiful for the first time in history that prisons are listed on the stock exchange. Human incapacitation is suspected to be a $80+ billion a year industry in the United States.

Under the tutelage of evil, fear is killing the mockingbirds of reason. In the absence of reason, through the collective genius of those without a social consciousness and refining intolerance and retribution with a vengeance, the convicted's debt to society can never be paid. The Internet assures electronic branding, discrimination, and unemployment, thereby guaranteeing an interminable cycle. The discrimination and intolerance is so insufferable, parolees will re-offend just to escape back into prison, trading one hell for another.

One of those psychologically broken parolees is Peter Sostre, a 48-year-old California prisoner serving twelve years. Peter describes rehabilitation as "Not as advertised. You ask for help, and they give you hate." He has the same sentiment for the self-applauded parolee guidance program. Like so many parolees, Peter ran into walls of discrimination and intolerance at every turn.

Peter saw two fellow parolees commit suicide, an act too familiar with California's prisoners and parolees. With no means of income, homeless, sleeping under cardboard, cold, and hungry. Rather than commit suicide, Peter chose to rob a gas station for $34, knowing the act would send him back to prison. Peter's story is all too common and a shameful indictment for "rehabilitation."

Further evidence. The evil tail wags the dog of reason.

One only needs to see how the elderly are treated in prison. Any person with a social science has to be brought to ad nauseam to see a jackboot guard bullying and screaming at a frail old state sanctioned elder. Abuse. Civilized countries and societies do not punish old men to death, yet fostering a societal thirst for vengeance leaves thousands of old men and women waiting for death in United States' prisons.

One of those thousands is Jerome Babineau, a 79-year-old California prisoner who has served 18 years into a life sentence. Beyond frail, old, and totally confined in a wheelchair, Jerome suffers from congestive heart disease. His lungs are so weak from mesothelioma, he requires 24/7 oxygen supplied by an oxygen generator for the rest of his life. Without AC power, it has to be recharged every two hours. Problem? Prosthetics in his left hip give him constant pain and is aggravated by advanced osteo-arthritis. A chronic blood clotting problem requires dangerously high doses of blood thinning medication. Diabetes and medication demand close monitoring, and if all of this isn't enough, he was recently diagnosed with kidney cancer.

Clearly, Jerome is no threat to society and become less of one each day as he degenerates. Yet California is going to punish him to death.

To put Jerome and others like him from a social conscience perspective, most people can remember the bombing of Pan American Airlines 747 over Lockerbee, Scotland that killed 266 people. The bomber was sentenced to life in prison in Scotland. While in prison, he developed prostate cancer and received a compassionate parole. He walked out of prison and onto the plane taking him home where he died a year later.

Jerome cannot walk anywhere. His health is worse than the Pan Am. bomber's and, although it shouldn't make a difference, his offense is less. California does not have an ounce of compassion. Do the moral math.

Those without a social conscience will ignore the facts and statistics, dismissing this essay as disaffected.

Those whom have a social conscience know the value of mockingbirds and will step up demanding change.

Hi Robert,
haven't read from you in a while, I hope you're alright.
Greetings, Julia