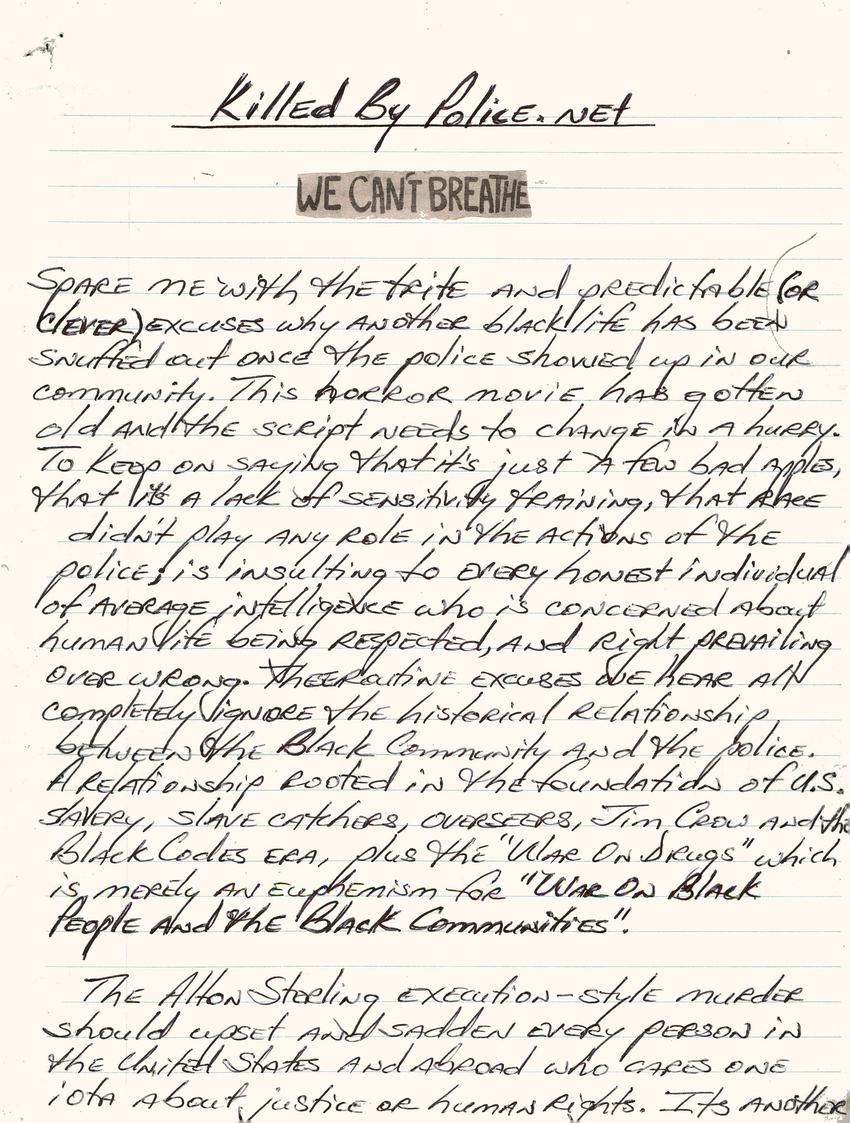 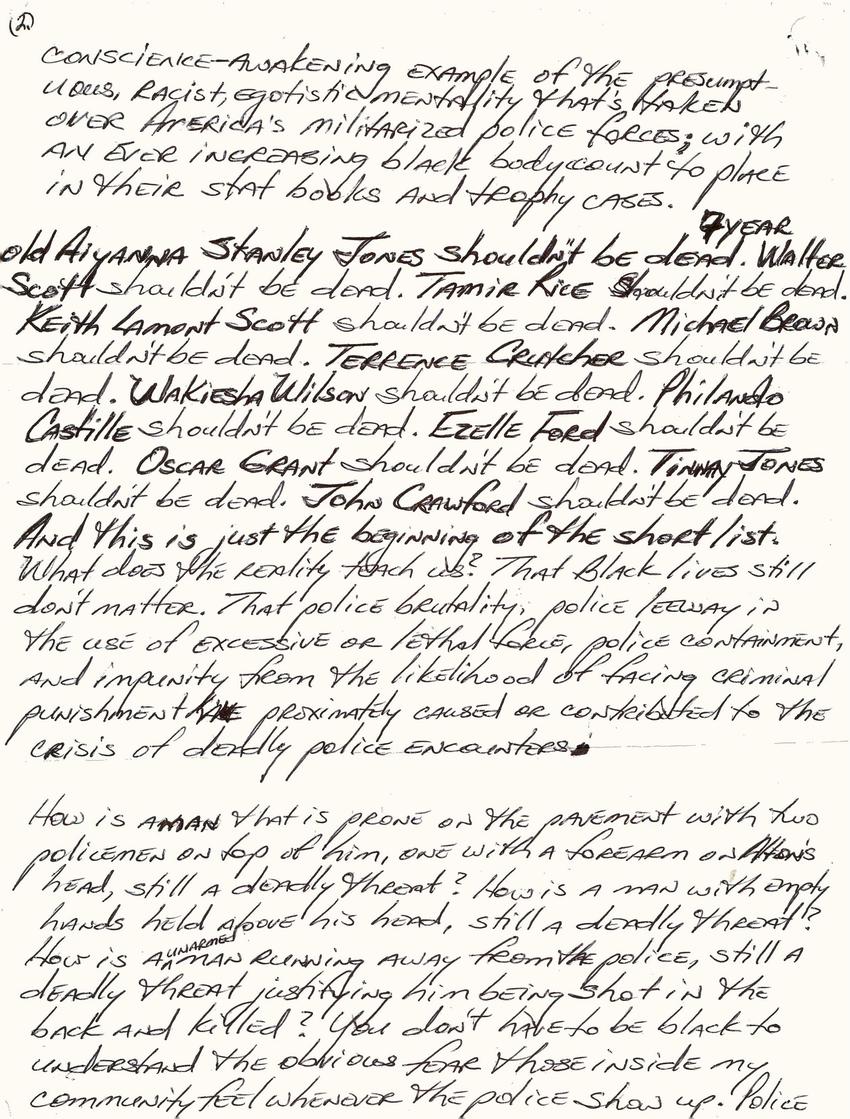 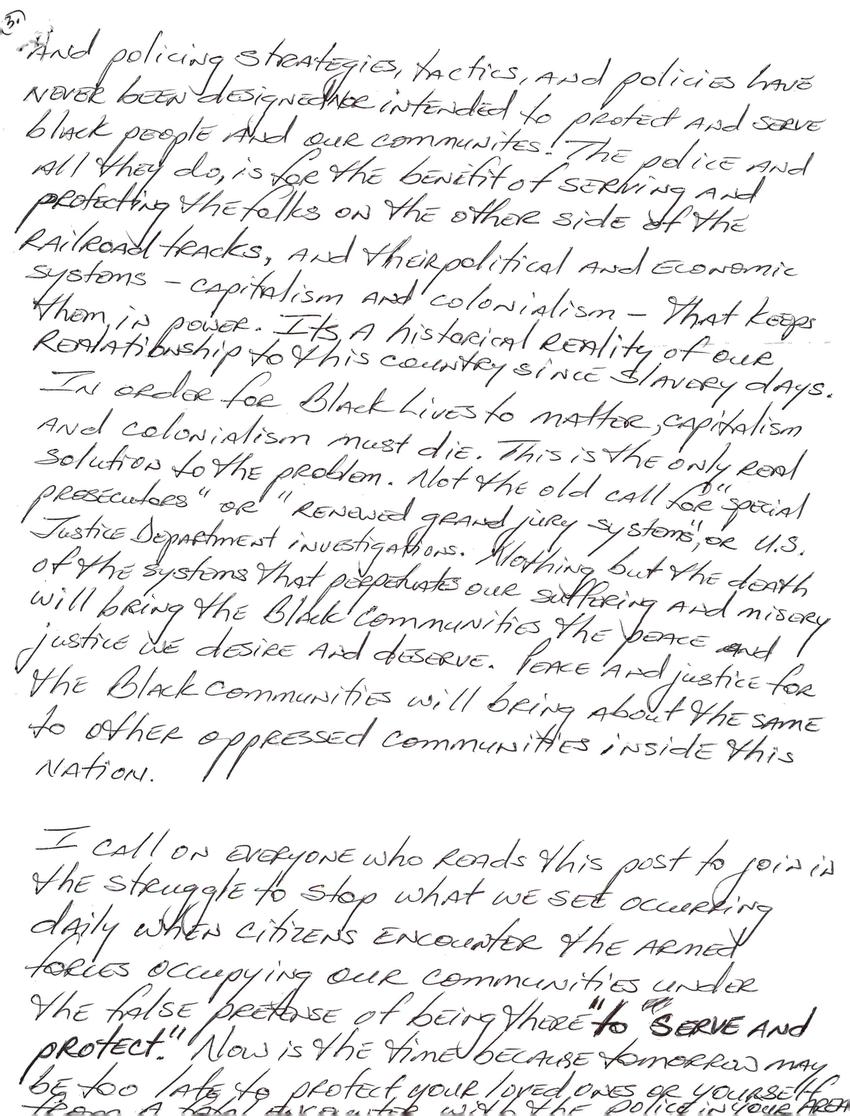 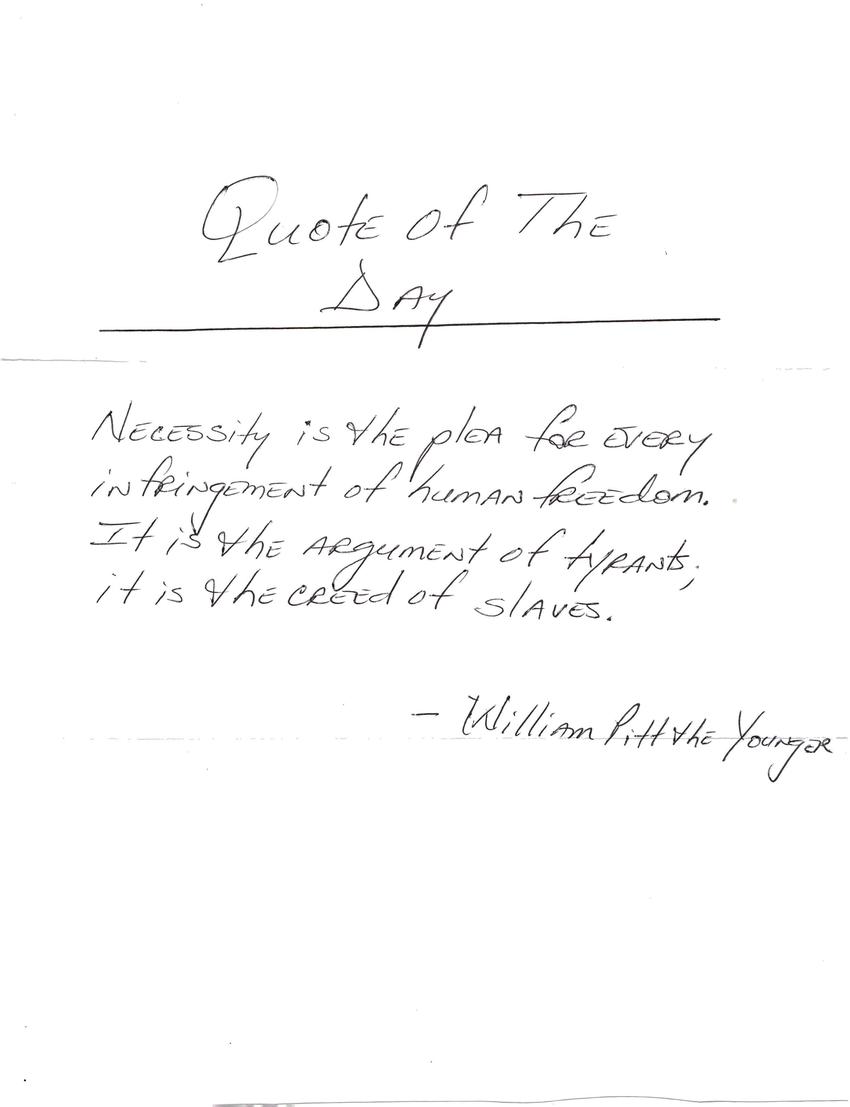 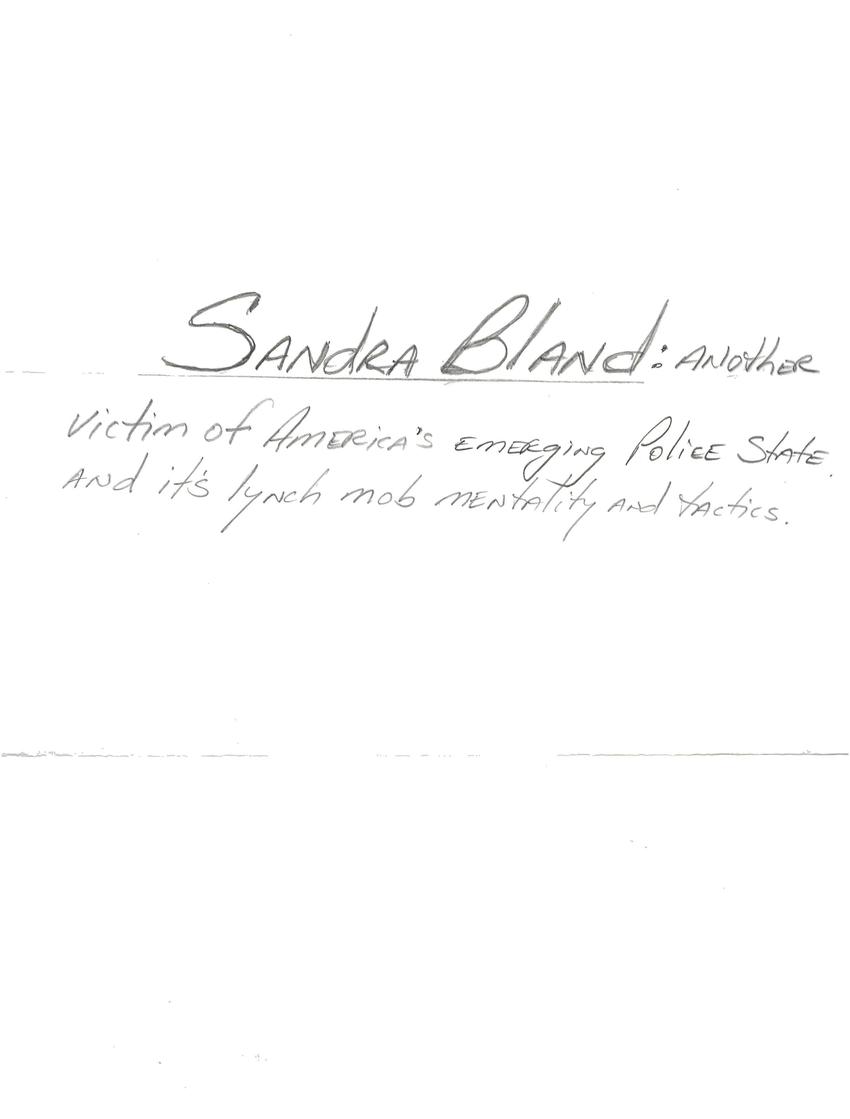 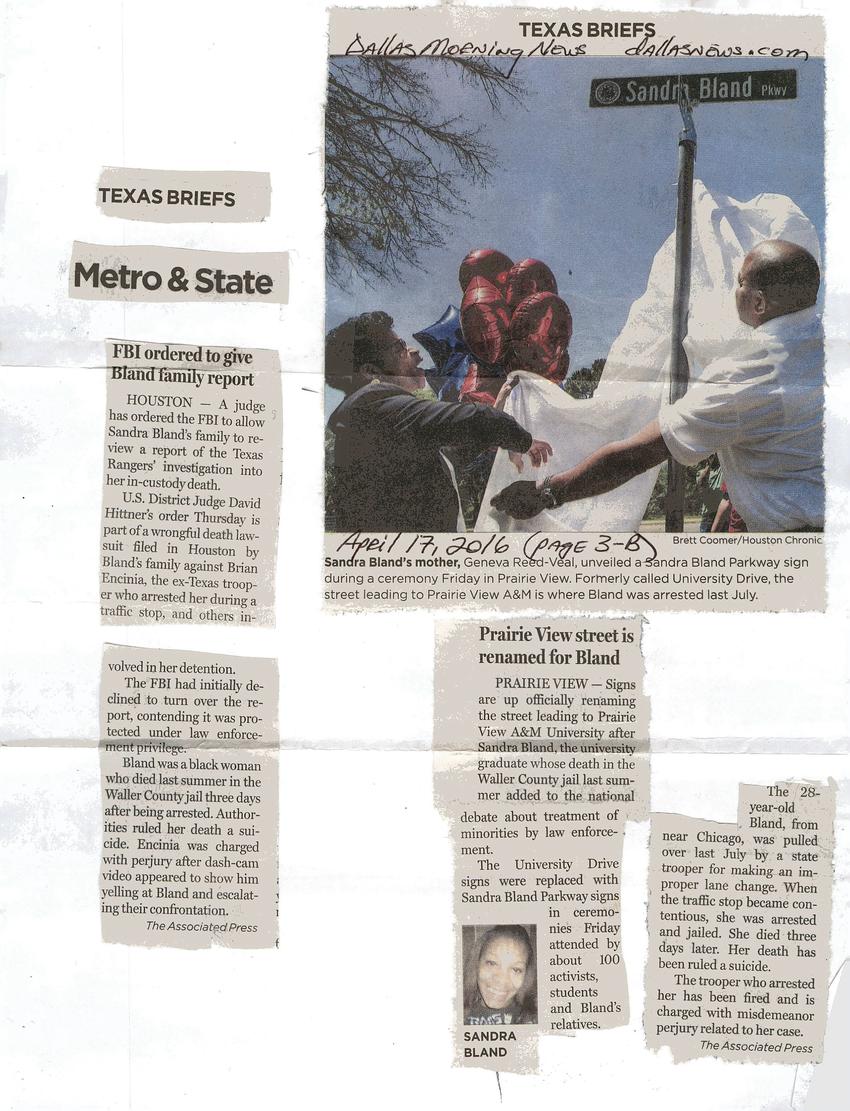 Killed By Police.net
We Can't Breathe

Spare me with the trite and predictable (or clever) excuses why another Black life has been snuffed out once the police showed up in our community. This horror movie has gotten old, and the script needs to change in a hurry. To keep on saying that it's just a few bad apples, that it's a lack of sensitivity training, that race didn't play any role in the actions of the police; is insulting to every honest individual of average intelligence who are concerned about human life being respected, and right prevailing over wrong.

The Alton Sterling execution-style murder should upset and sadden every person in the United States and abroad who cares one iota about justice or human rights. It's another conscience-awakening example of the presumptuous, racist, egotistical mentality that's taken over America's militarized police forces with an ever increasing Black body count to place in their stat books and trophy cases.

What does reality teach us? That Black lives still don't matter. That police brutality, police leeway is the use of excessive or lethal force, police containment and impunity from the likelihood of facing criminal punishment have proximately caused or contributed to the crisis of deadly police encounters.

You don't have to be Black to understand the obvious fear found inside my community whenever the police show up. Police and policing strategies, tactics, and policies have never been designed nor intended to protect and serve Black people and our communities. The police and all they do is for the benefit of serving and protecting the folks on the other side of the railroad tracks, and their political and economic systems—capitalism and colonialism—that keeps them in power. It's a historical reality of our relationship to this country ever since slavery days.

In order for the Black lives to matter, capitalism and colonialism must die. This is the only real solution to the problem. Not the old call for "special procedures" or "renewed grand jury systems" or U.S. Justice Department investigations. Nothing but the death of the systems that perpetuates our suffering and misery will bring the Black communities the peace and justice we desire and deserve. Peace and justice for the Black communities will bring about the same to other oppressed communities inside this nation.

I call on everyone who reads this post to join in the struggle, to stop what we see occurring daily when citizens encounter the armed forces occupying our communities under the false pretense of being there to "serve and protect." Now is the time because tomorrow may be too late to protect your loved ones or yourself from a fatal encounter with the police in your area.

Necessity is the plea for every infringement of human freedom. It is the argument of tyrants; it is the creed of slaves.
—William Pitt, the younger

Sandra Bland: Another victim of America's emerging police state and its lynch mob mentality and tactics.

FBI ordered to give Bland family report
HOUSTON - A judge had ordered the FBI to allow Sandra Bland's family to review a report of the Texas Rangers' investigation into her in-custody death.

U.S. District Judge David Hittner's order Thursday is part of a wrongful death lawsuit filed in Houston by Bland's family against Brian Encinia, the ex-Texas trooper who arresed her during a traffic stop, and others involved in her detention.

The FBI had initially declined to turn over the report, contending it was protected under law enforcement privilege.

Bland was a black woman who died last summer in the Waller County jail three days after being arrested. Authorities ruled her death a suicide. Encinia was charged with perjury after dash-cam video appeared to show him yelling at Bland and escalating their confrontation.
The Associated Press

Prairie View street is renamed for Bland
PRAIRIE VIEW - Signs are up officially renaming the street leading to Prairie View A&M University after Sandra Bland, the university graduate whose death in the Waller County Jail last summer added to the national debate about treatment of minorities by law enforcement.

The 28-year-old Bland, from near Chicago, was pulled over last July by a state trooper for making an improper lane change. When the traffic stop became contentious, she was arrested and jailed. She died three days later. Her death has been ruled a suicide.

The trooper who arrested her has been fired and is charged with misdemeanor perjury related to her case.
The Associated Press