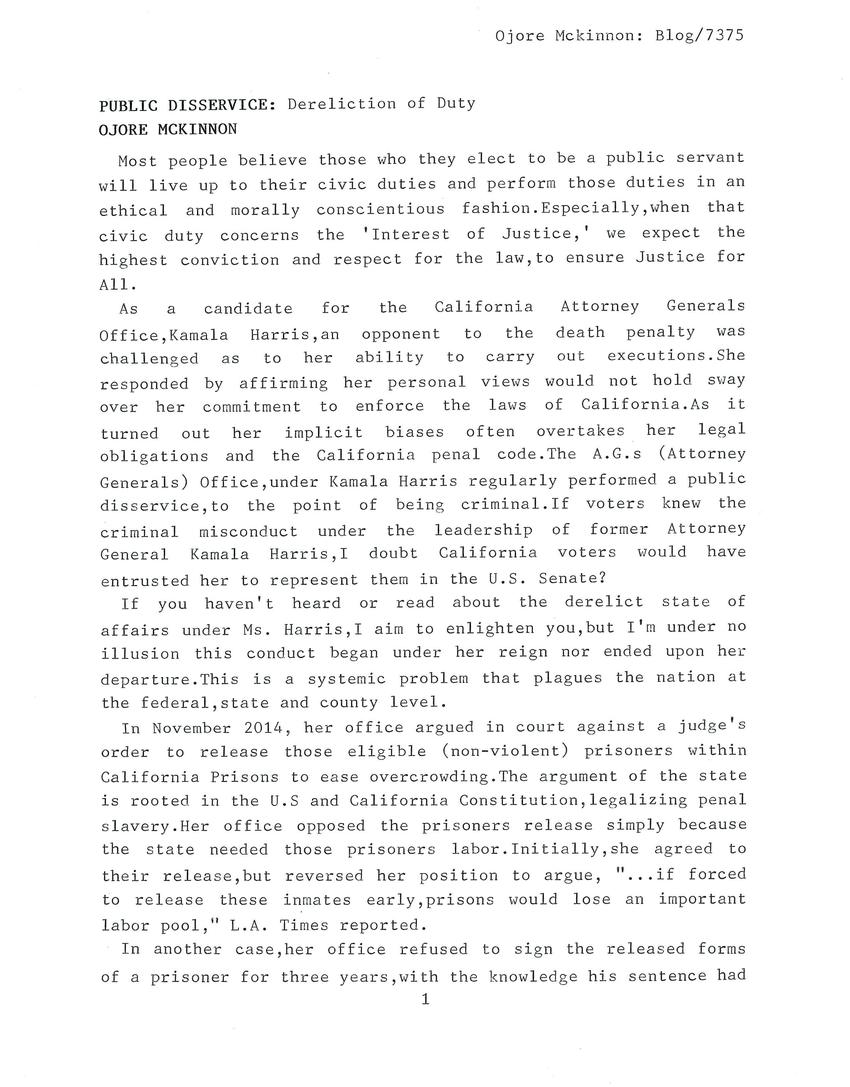 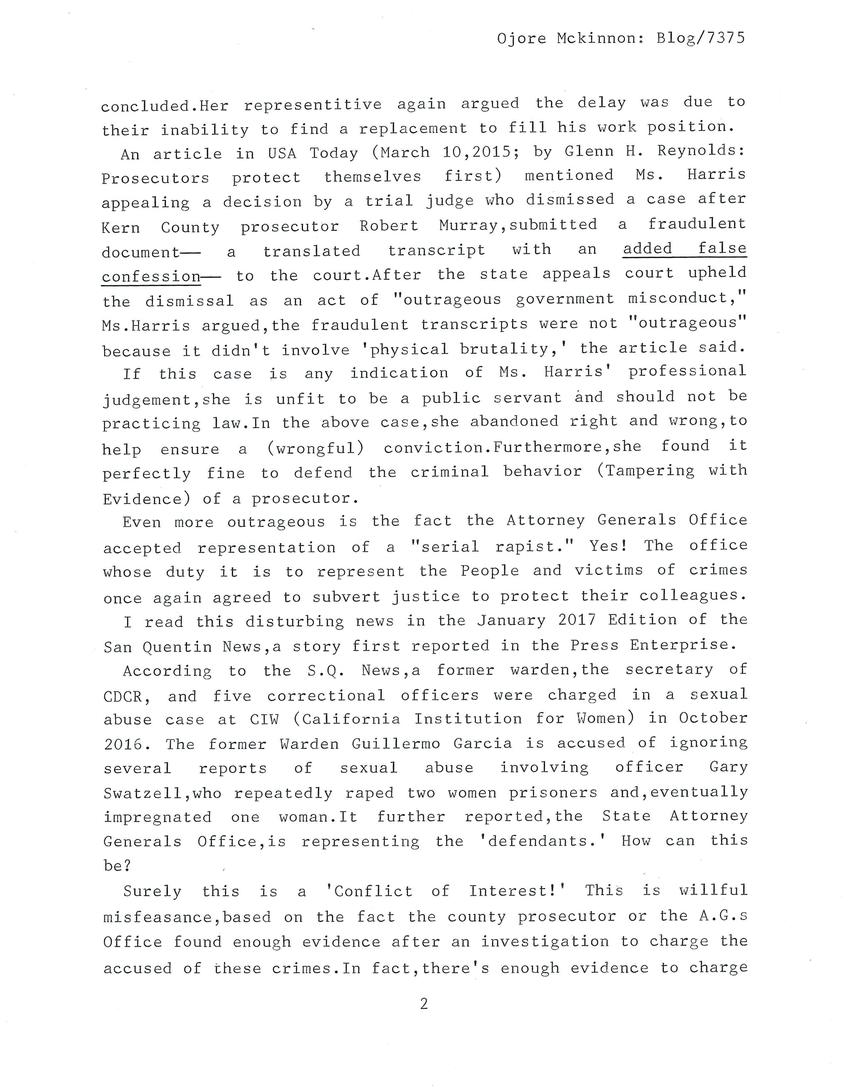 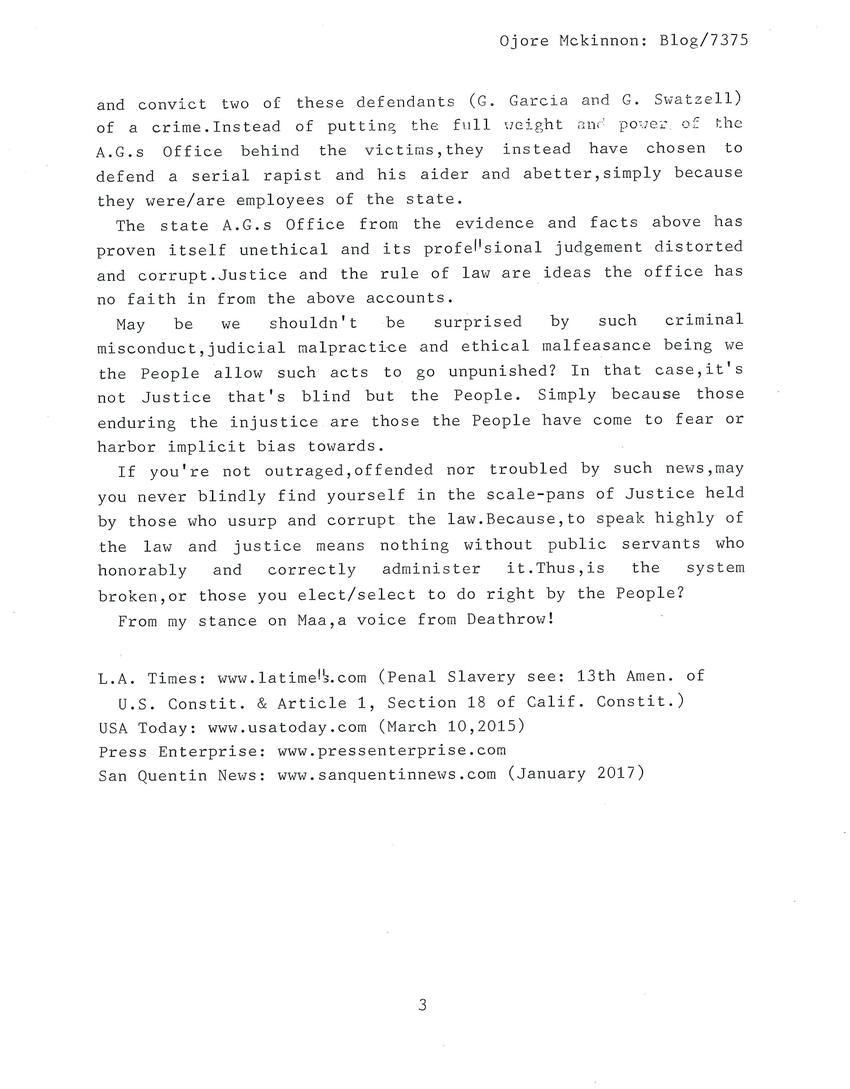 Most people believe those who they elect to be a public servant will live up to their civic duties and perform those duties in an ethical and morally conscientious fashion. Especially, when that civic duty concerns the "Interest of Justice," we expect the highest conviction and respect for the law, to ensure Justice for All.

As a candidate for the California Attorney Generals Office, Kamala Harris, an opponent to the death penalty was challenged as to her ability to carry out executions. She responded by affirming her personal views would not hold sway over her commitment to enforce the laws of California. As it turned out her implicit biases often overtakes her legal obligations and the California penal code. The A.G.s (Attorney General's) office under Kamala Harris regularly performed a public disservice, to the point of being criminal. If voters knew the criminal misconduct under the leadership of a former Attorney General Kamala Harris, I doubt California voters would have entrusted her to represent them in the US Senate?

If you haven't heard or read about the derelict state of affairs under Ms. Harris, I aim to enlighten you, but I'm under no illusion this conduct began under her reign nor ended upon her departure. This is a systemic problem that plagues the nation at the federal, state and county level.

In November 2014, her office argued in court against a judge's order to release those eligible (non-violent) prisoners within California Prisons to ease overcrowding. The argument of the state is rooted in the U.S. and California Constitution, legalizing penal slavery. Her office opposed the prisoners release simply because the state needed those prisoners labor. Initially, she agreed to the release, but reversed her position to argue, "...if forced to release these inmates early, prisons would lose an important labor pool," L.A. Times reported.

In another case, her office refused to sign the release forms of a prisoner for three years, with the knowledge his sentence had concluded. Her representative again argued the delay was due to their inability to find a replacement to fill his work position. An article in USA Today (March 10, 2015; by Glenn H. Reynolds: Prosecutors protect themselves first) mentioned Ms. Harris appealing a decision by a trial judge who dismissed the case after Kern County prosecutor Robert Murray, submitted a fraudulent document--a translated transcript with an added false confession -- to the court. After the state appeals court upheld the dismissal as an active "outrageous government misconduct," Ms Harris argued, the fraudulent transcripts were not "outrageous" because they didn't involve 'physical brutality,' the article said.

If this case is any indication of Ms. Harris' professional judgment, she is unfit to be a public servant and should not be practicing law. In the above case, she abandoned right and wrong to help ensure a (wrongful)conviction. Furthermore, she found it perfectly fine to defend the criminal behavior (Tampering with Evidence) of a prosecutor.

Even more outrageous is the fact that the Attorney Generals office accepted representation of a "serial rapist." Yes! The office whose duty it is to represent the People and victims of crimes once again agreed to subvert justice to protect their colleagues.

I read this disturbing news in the January 2017 Edition of the San Quentin news, a story first reported in the Press Enterprise. According to the S.Q. News, a former warden, the Secretary of CDCR, and five correctional officers were charged in a sexual abuse case at CIW (California Institution for Women) in October 2016. The former Warden Guillermo Garcia is accused of ignoring several reports of sexual abuse involving Officer Gary Swatzell, who repeatedly raped two women prisoners and, eventually impregnated one woman. It further reported, the State Attorney General's office, is representing the 'defendants.' How can this be? Surely this is a conflict of interest! This is willful misfeasance, based on the fact that the county prosecutor or the A.G.s Office found enough evidence after an investigation to charge the accused of these crimes. In fact, there's enough evidence to charge and convicted of these defendants (G. Garcia and G. Swatzell) of a crime. Instead of putting the full weight and power of the A.G.s office behind the victims, they instead have chosen to defend a serial rapist and his aider and abettor, simply because they were/are employees of the state.

The state A.G.s office from the evidence and facts above has proven itself unethical and its professional judgment distorted and corrupt. Justice and the rules of law are ideas the office has no faith in from the above accounts.

Maybe we shouldn't be surprised by such criminal misconduct, judicial malpractice and ethical malfeasance being we the People allow such acts to go on punished? In that case, it's not justice that's blind but the People. Simply because those enduring the injustice are those the people have come to fear or harbor implicit bias towards.

If you're not outraged, offended nor troubled by such news, may you never blindly find yourself in the scale-pans of Justice held by those who usurp and corrupt the law. Because, to speak highly of the law and justice means nothing without public servants who honorably and correctly administer it. Thuss, is the system broken, or those you elected/selected to do right by the People?

From my stance on Maa, a voice from Deathrow!

Thank you for your informative letter. I voted for Ms. Harris under duress this election, thinking we had no better option. I have feared ever since then it was a mistake, and your letter has stoked that fire. We do need a complete overhaul of the system, and maybe the only good that will come out of our current political nightmare is that we may just get it.

I have thought of you, and this post of yours on Senator Harris often lately. You must be relieved she did not get the Democratic nomination. Although it's hard to tell if that was because people could see through her and didn't like her track record, or if it was plan racism + sexism. Maybe some of all. 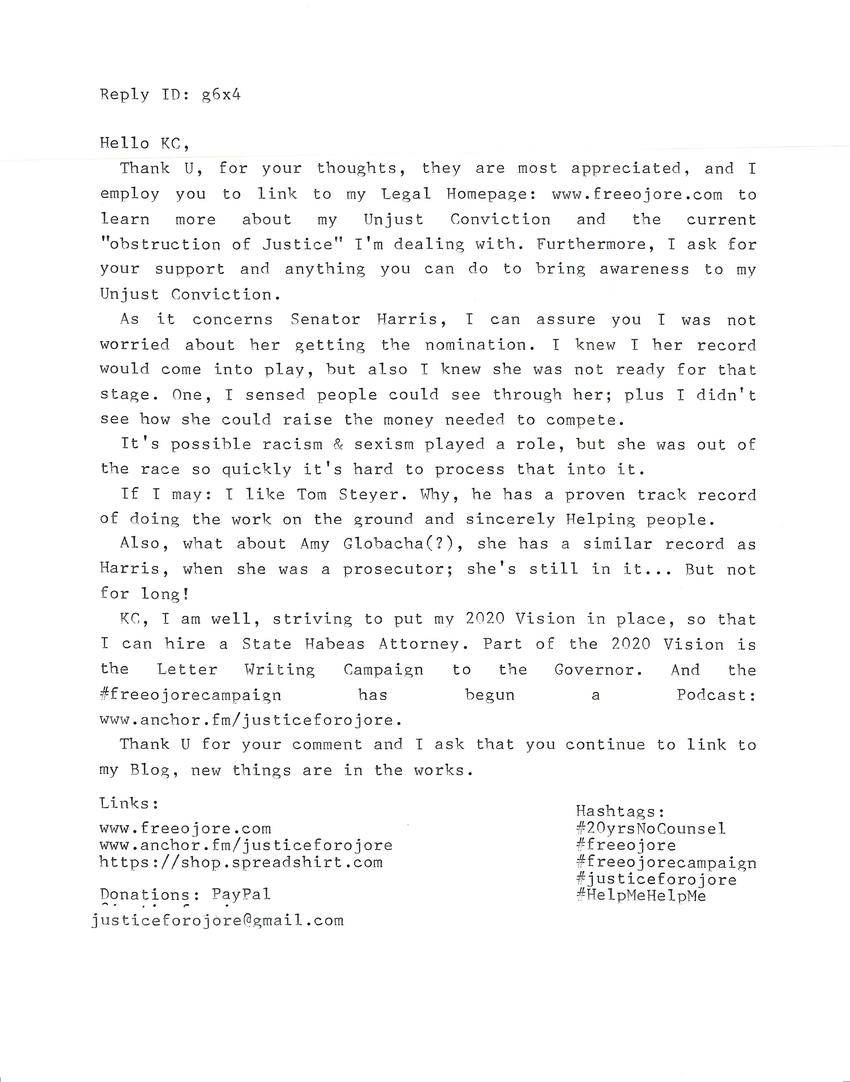