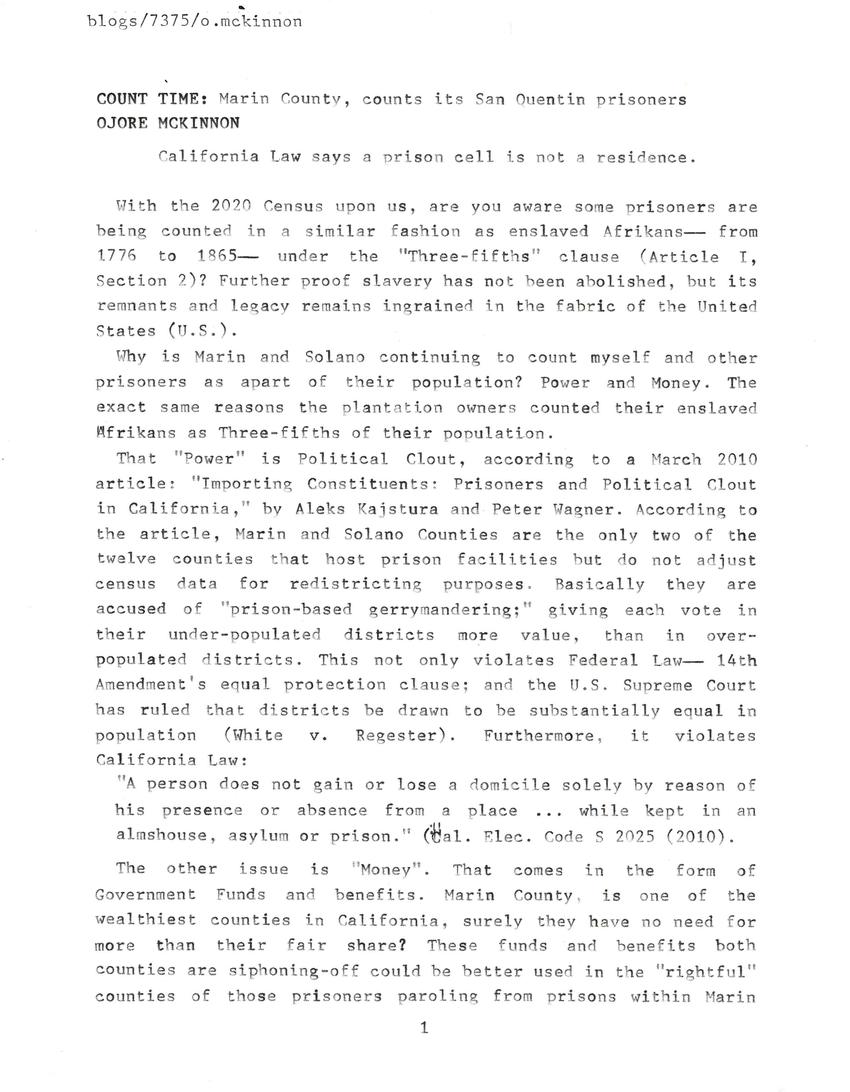 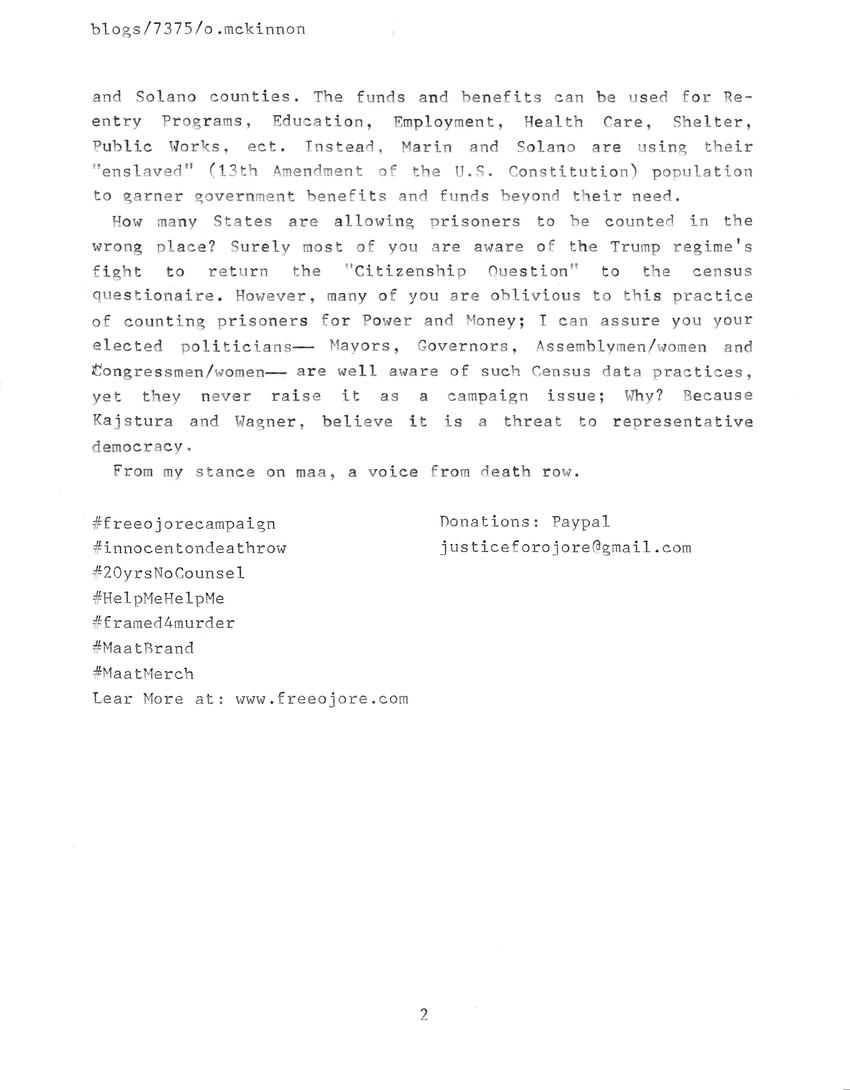 California Law says a prison cell is not a residence.

With the 2020 Census upon us, are you aware some prisoners are being counted in a similar fashion as enslaved Afrikans - from 1776 to 1865 - under the "Three-fifths" clause (Article I, Section 2)? Further proof slavery has not been abolished, but its remnants and legacy remains ingrained in the fabric of the United States (U.S.).

Why is Marin and Solano continuing to count myself and other prisoners as apart of their population? Power and Money. The exact same reasons the plantation owners counted their enslaved Afrikans as Three-fifths of their population.

That "Power" is Political Clout, according to a March 2010 article: "Importing Constituents: Prisoners and Political Clout in California," by Aleks Kajstura and Peter Wagner. According to the article, Marin and Solano Counties are the only two of the twelve counties that host prison facilities but do not adjust census data for redistricting purposes. Basically they are accused of "prison-based gerrymandering;" giving each vote in their under-populated districts more value, than in over-populated districts. This not only violates Federal Law - 14th Amendment's equal protection clause; and the U.S. Supreme Court has ruled that districts be drawn to be substantially equal in population (White v. Regester). Furthermore, it violates California Law:

The other issues is "Money". That comes in the form of Government Funds and benefits. Marin County, is one of the wealthiest counties in California, surely they have no need for more than their fair share? These funds and benefits both counties are siphoning-off could be better used in the "rightful" counties of those prisoners patroling from prisons within Marin and Solano counties. The funds and benefits can be used for Re-entry Programs, Education, Employment, Health Care, Shelter, Public Works. etc. Instead, Marin and Solano are using their "enslaved" (13th Amendment of the U.S. Constitution) population to garner government benefits and funds beyond their need.

How many States are allowing prisoners to be counted in the wrong place? Surely most of you are aware of the Trump regime's fight to return the "Citizenship Question" to the census questionaire. However, many of you are oblivious to this practice of counting prisoners for Power and Money; I can assure you your elected politicians - Mayors, Governors, Assemblymen/women and Congressmen/women - are well aware of such Census data practices, yet they never raise it as a campaign issue; Why? Because Katjstura and Wagner, believe it is a threat to representative democracy.

From my stance on maa, a voice from death row.

Thanks for writing! I finished the transcription for your post.
(scanned reply – view as blog post)
uploaded May 19, 2021.  Original (PDF) 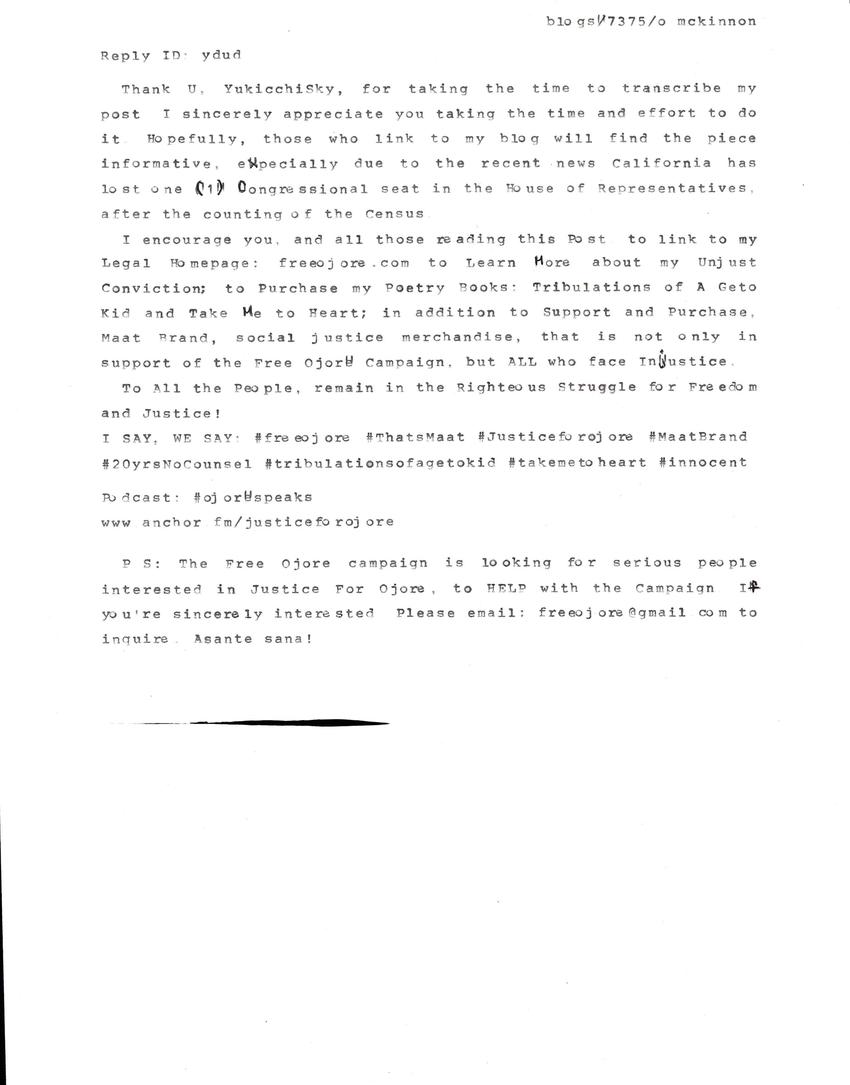