The Whole Damn Ochard: Rotten at the roots 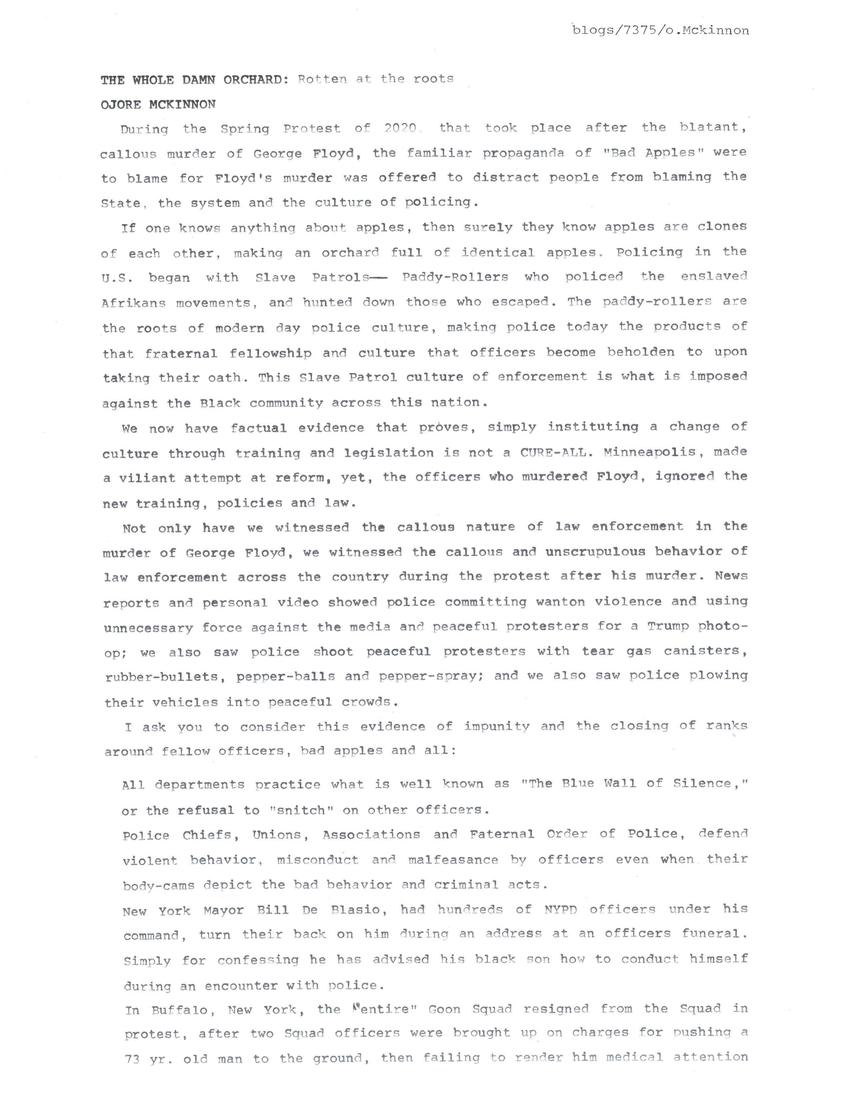 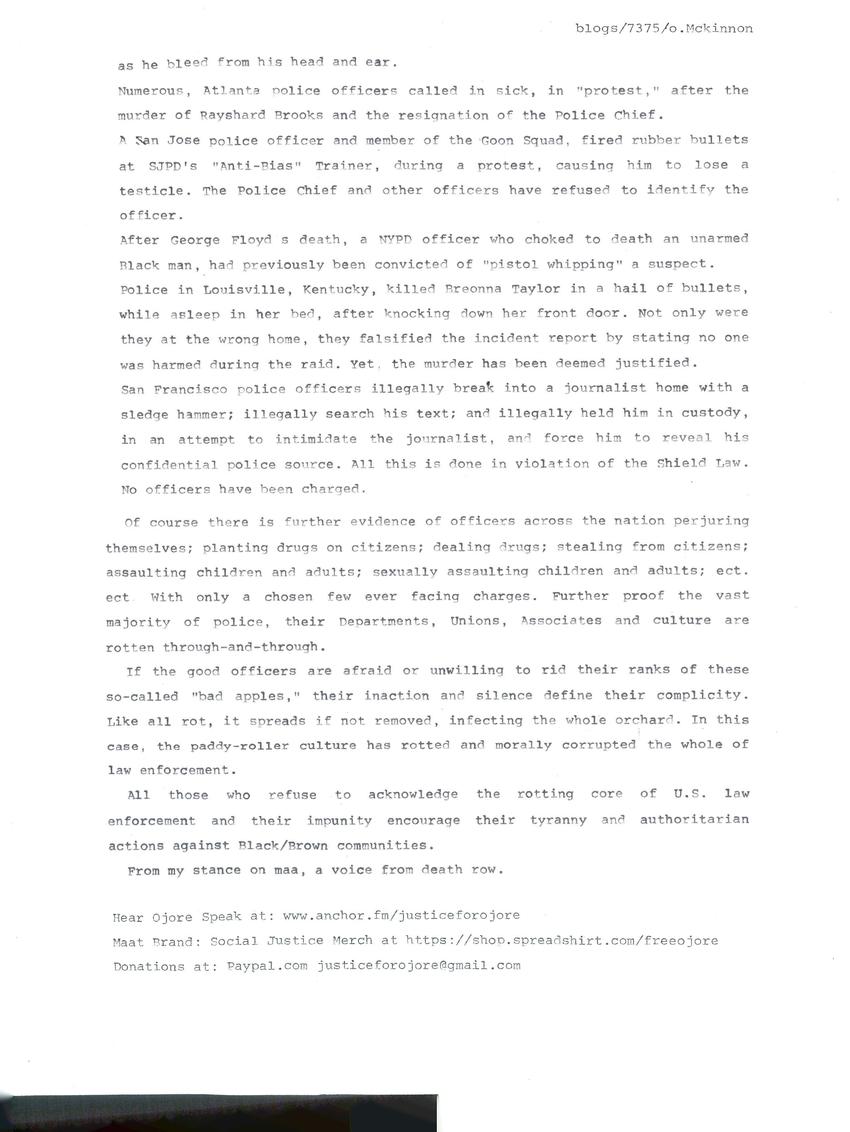 THE WHOLE DAMN ORCHARD: Rotten at the roots
OJORE MCKINNON

During the Spring Protest of 2020 that took place after the blatant, callous murder of George Floyd, the familiar propaganda of "Bad Apples" were to blame for Floyd's murder was offered to distract people from blaming the State, the system and the culture of policing.

If one knows anything about apples, then surely they know apples are clones of each other, making an orchard full of identical apples. Policing in the U.S. began with Slave Patrols- Paddy-Rollers who policed the enslaved Afrikans movements, and hunted those who escaped. The paddy-rollers are the roots of modern day police culture, making police today the products of the fraternal fellowship and culture the officers become beholden to upon taking their oath. This Slave Patrol culture is what is imposed against the Black community across this nation.

We now have factual evidence that proves, simply instituting a change of culture through training and legislation is not a CURE-ALL. Minneapolis, made a viliant attempt at reform, yet, the officers murdered Floyd, ignored the new training, policies and law.

Not only have we witnessed the callous nature of law enforcement in the murder of George Floyd, we witnessed the callous and unscrupulous behavior of law enforcement across the country during the protest after his murder. News reports and personal video showed police committing wanton violence and using unnecessary force against the media and peaceful protestors with tear gas canisters, rubber-bullets, pepper-balls and pepper-spray; and we also saw police plowing their vehicles into peaceful crowds.

I ask you to consider this evidence of impunity and the closing of ranks around fellow officers, bad apples and all:
All departments practice what is well know as "The Blue Wall of Silence," of the refusal to "snitch" on other officers.
Police Chiefs, Unions, Associations and Fraternal Order of Police, defend violent behavior, misconduct and malfeasance
by officers even when their body-cams depict the bad behavior and criminal acts.
New York mayor Bill De Blasio, had hundreds of NYPD officers under his command, turn their back on him during an address
at an officers funeral. Simply for confessing he has advised his black son how to conduct himself during an encounter with police.
In Buffalo, New York, the "entire" Goon Squad resigned from the Squad in protest, after two Squad officers were brought up on charges
for pushing a 73 yr. old man to the ground, then failing to render him medical attention as he blead from his head and ear.
Numerous, Atlanta police officers called in sick, in "protest," after the murder of Rayshard Brooks and the resignation of the Police
Chief. A San Jose police officer and member of the Goon Squad, fired rubber bullets at SJPD's "Anti-Bias" Trainer, during a protest
causing him to lose a testicle. The Police Chief and other officers have refused to identify the officer.

After George Floyd's death, a NYPD officer who choked to death an unarmed Black man, had previously been convicted of "pistol whipping"
a suspect. Police in Louisville, Kentucky, killed Breonna Taylor in a hail of bullets, while asleep in her bed, after knocking her front
door down. Not only were they at the wrong home, they falsified the incident report by stating no one was harmed during the raid. Yet, the
murder has been deem justified. San Francisco police officers illegally break into a journalist home with sledge hammer; illegally search
his text; and illegally held him in custody in an attempt to intimidate the journalist, and force him to reveal his confidential police source.
All this id done in violation of the Shield Law. No officers have been charged.

Of course there is further evidence of officers across the nation perjuring themselves; planting drugs on citizens; dealing drugs; stealing from
citizens; assaulting children and adults; sexually assaulting children and adults; ect. With only a chosen few ever facing charges. Further proof
the vast majority of police, their Departments, Unions, Associates and culture are rotten through and through.

If the good officers are afraid or unwilling to rid their ranks of these so-called "bad apples," their inaction and silence define their complicity.
Like all rot, it spreads if not removed, infecting the whole orchard. In this case, the paddy-roller culture has rotted and morally corrupted the whole
law enforcement.

All those who refuse to acknowledge the rotting core of the U.S. law enforcement and their impunity encourage their tyranny and authoritarian actions
against Black/Brown communities.

From my stance on maa, a voice from death row.

Thanks for writing! I finished the transcription for your post. I agree with some of your points but would urge you to review the "facts" in particular the Breonna Taylor case as I can't find any basis for some of your statements but don't know how limited you are to getting information but to be clear officers have been charged and they were at the correct house and there was never any denying they shot her from day one. No matter what side you are on facts matter and from your writings I can tell you are an intelligent man with strong opinions....just back your opinions with facts as you did in many places in this post. Don't let your opinion be a bias for truth. Seek truth with an open mind, something we all struggle with. There will never be true justice on this earth but on "The" judgement day" we will have to all answer to our God and Creator. Praying you seek him and will be prepared for that day.