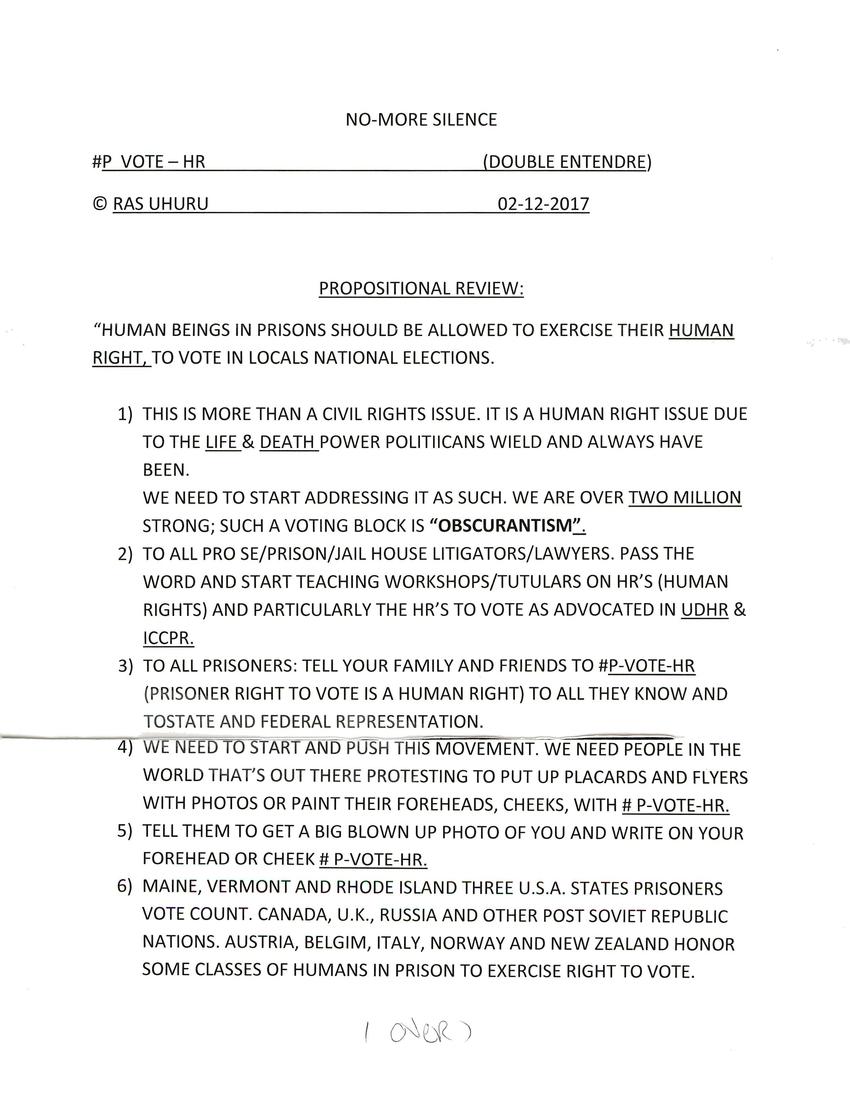 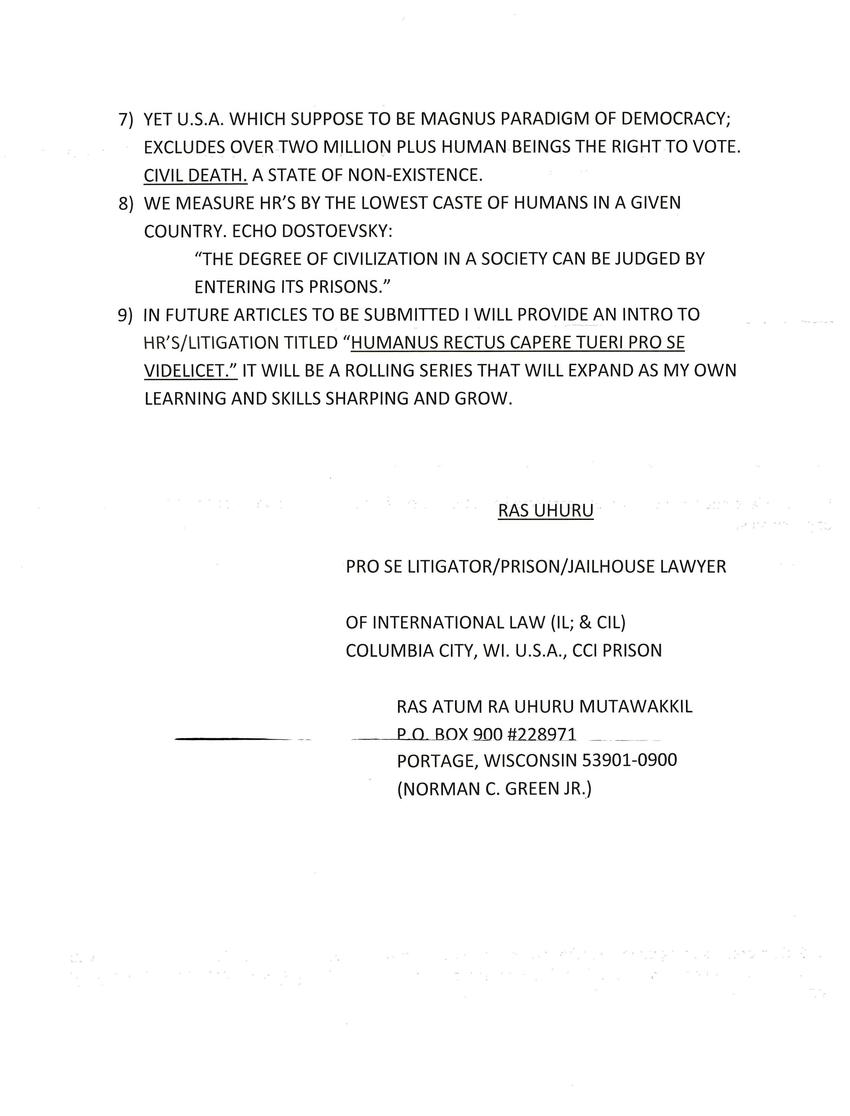 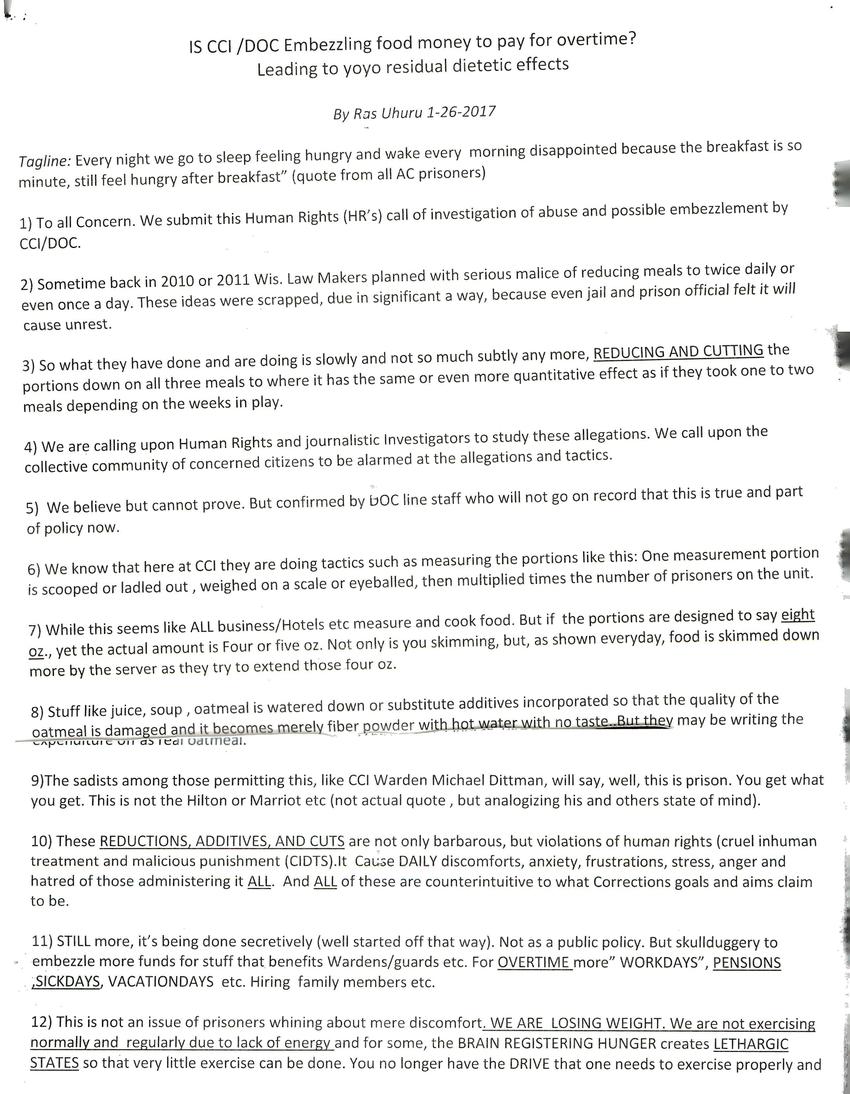 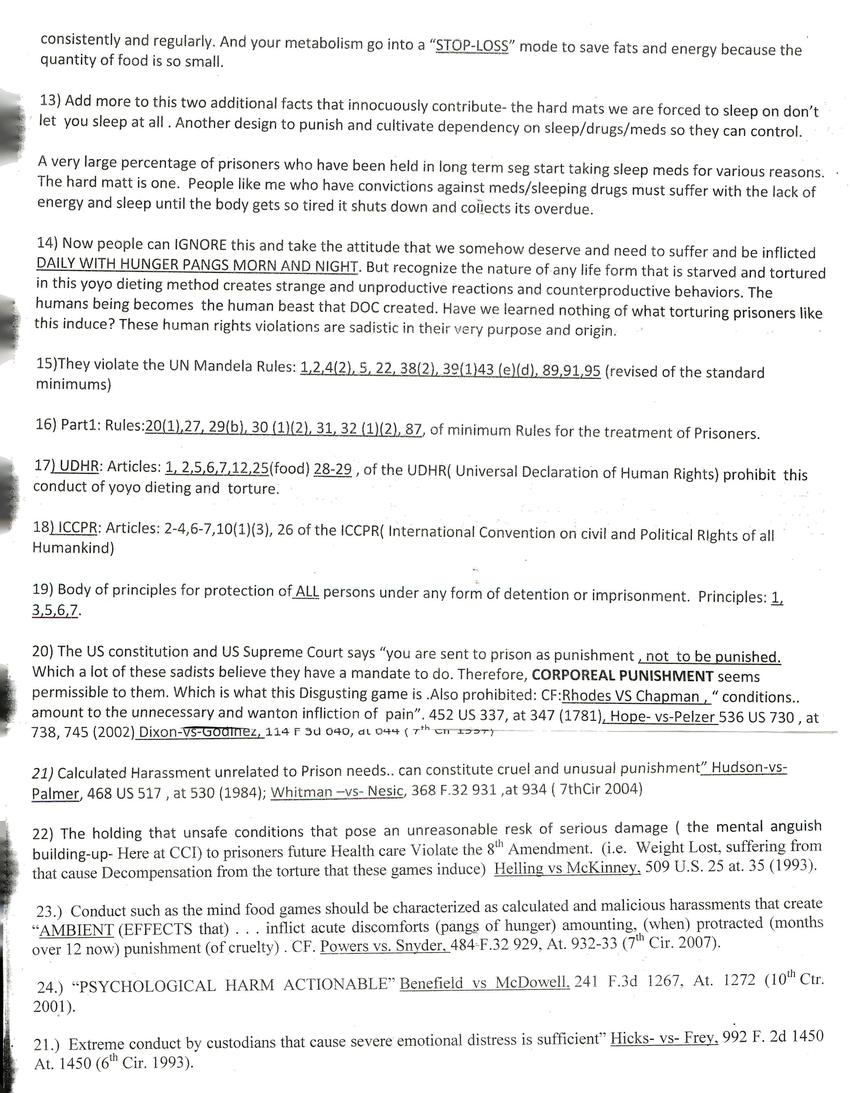 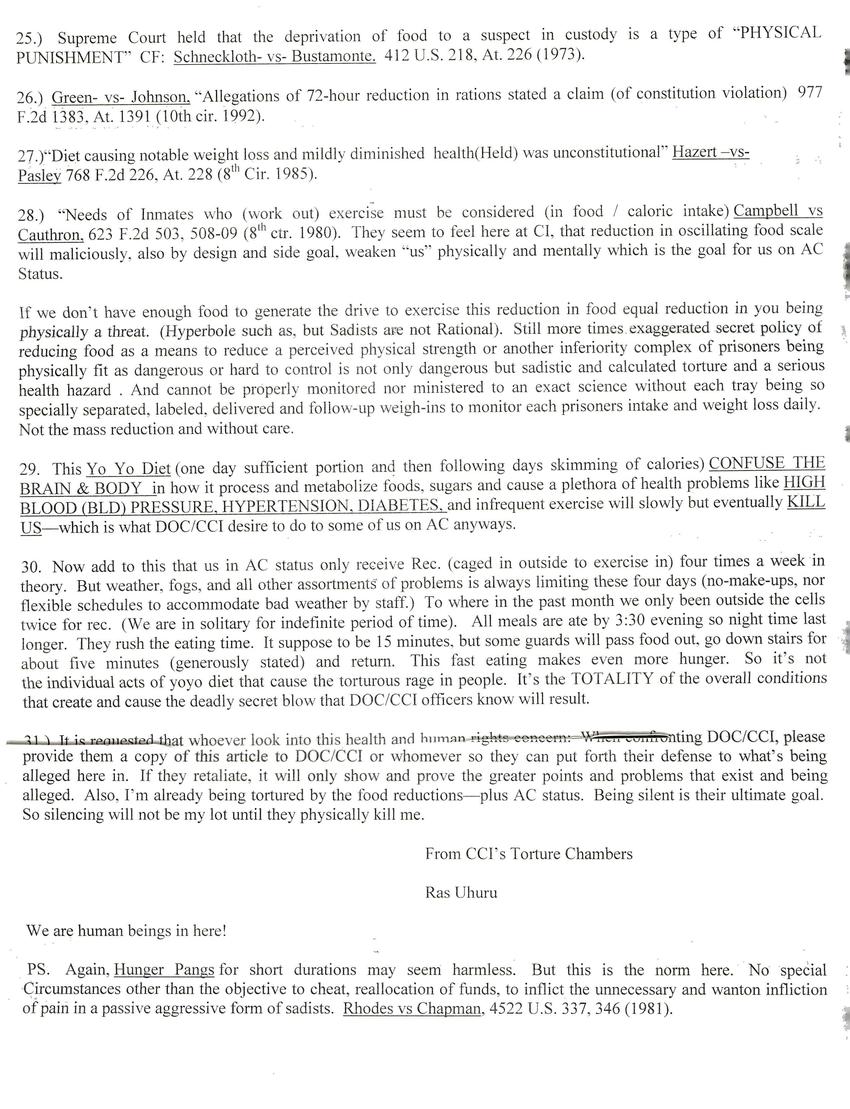 "HUMAN BEINGS IN PRISONS SHOULD BE ALLOWED TO EXERCISE THEIR HUMAN RIGHT, TO VOTE IN LOCALS NATIONAL ELECTIONS.

1) THIS IS MORE THAN A CIVIL RIGHTS ISSUE. IT IS A HUMAN RIGHT ISSUE DUE TO THE LIFE & DEATH POWER POLITICIANS WIELD AND ALWAYS HAVE BEEN.
WE NEED TO START ADDRESSING IT AS SUCH. WE ARE OVER TWO MILLION STRONG; SUCH A VOTING BLOCK IS "OBSCURANTISM".
2) TO ALL PRO SE/PRISON/JAIL HOUSE LITIGATORS/LAWYERS. PASS THE WORD AND START TEACHING WORKSHOPS/TUTULARS ON HR'S (HUMAN RIGHTS) AND PARTICULARLY THE HR'S TO VOTE AS ADVOCATED IN UDHR & ICCPR.
3) TO ALL PRISONERS: TELL YOUR FAMILY AND FRIENDS TO #P-VOTE-HR (PRISONER RIGHT TO VOTE IS A HUMAN RIGHT) TO ALL THEY KNOW AND TO STATE AND FEDERAL REPRESENTATION.
4) WE NEED TO START AND PUSH THIS MOVEMENT. WE NEED PEOPLE IN THE WORLD PHOTOS OR PAINT THEIR FOREHEADS, CHEEKS, WITH # P-VOTE-HR.
5) TELL THEM TO GET A BIG BLOWN UP PHOTO OF YOU AND WRITE ON YOUR FOREHEAD OR CHEEK # P-VOTE-HR.
6) MAINE, VERMONT AND RHODE ISLAND THREE U.S.A. STATES PRISONERS VOTE COUNT. CANADA, U.K., RUSSIA AND OTHER POST SOVIET REPUBLIC NATIONS. AUSTRIA, BELGIUM, ITALY, NORWAY AND NEW ZEALAND HONOR SOME CLASSES OF HUMANS IN PRISON TO EXERCISE RIGHT TO VOTE.

7) YET U.S.A. WHICH SUPPOSE TO BE MAGNUS PARADIGM OF DEMOCRACY; EXCLUDES OVER TWO MILLION PLUS HUMAN BEINGS THE RIGHT TO VOTE. CIVIL DEATH. A STATE OF NON-EXISTENCE.
8) WE MEASURE HR'S BY THE LOWEST CASTE OF HUMANS IN A GIVEN COUNTRY. ECHO DOSTOEVSKY:
"THE DEGREE OF CIVILIZATION IN A SOCIETY CAN BE JUDGED BY ENTERING ITS PRISONS."
9) IN FUTURE ARTICLES TO BE SUBMITTED I WILL PROVIDE AN INTRO TO HR'S/LITIGATION TITLED "HUMANUS RECTUS CAPERE TUERI PRO SE VIDELICET." IT WILL BE A ROLLING SERIES THAT WILL EXPAND AS MY OWN LEARNING AND SKILLS SHARPING AND GROW.

Tagline: Every night we go to sleep feeling hungry and wake every morning disappointed because the breakfast is so minute, still feel hungry after breakfast" (quote from all AC prisoners)

1) To all Concern. We submit this Human Rights (HR's) call of investigation of abuse and possible embezzlement by CCI/DOC.

2) Sometime back in 2010 or 2011 Wis. Law Makers planned with serious malice of reducing meals to twice daily or even once a day. These ideas were scrapped, due in significant a way, because even jail and prison official felt it will cause unrest.

3) So what they have done and are doing is slowly and not so much subtly any more, REDUCING AND CUTTING the portions down on all three means to where it has the same or even more quantitative effect as if they took one to two meals depending on the weeks in play.

4) We are calling upon Human Rights and journalistic Investigators to study these allegations. We call upon the collective community of concerned citizens to be alarmed at the allegations and tactics.

5) We believe but cannot prove. But confirmed by DOC line staff who will not go on record that this is true and part of policy now.

6) We know that here at CCI they are doing tactics such as measuring the portions like this: One measurement portion is scooped or ladled out, weighed on a scale or eyeballed, then multiplied times the number of prisoners on the unit.

7) While this seems like ALL business/Hotels etc measure and cook food. But if the portions are designed to say eight oz., yet the actual amount is Four or five oz. Not only is you skimming, but, as shown everyday, food is skimmed down more by the server as they try to extend those four oz.

8) Stuff like juice, soup, oatmeal is watered down or substitute additives incorporated so that the quality of the oatmeal is damaged and it becomes merely fiber powder with hot water with no taste. But they may be writing the expenditure on as real oatmeal.

9) The sadists among those permitting this, like CCI Warden Michael Dittman, will say, well, this is prison. You get what you get. This is not the Hilton or Marriot etc (not actual quote, but analogizing his and others state of mind).

10) These REDUCTIONS, ADDITIVES, AND CUTS are not only barbarous, but violations of human rights (cruel inhuman treatment and malicious punishment (CIDTS). It Cause DAILY discomforts, anxiety, frustrations, stress, anger and hatred of those administering it ALL. And ALL of these are counterintuitive to what Corrections goals and aims claim to be.

12) This is not an issue of prisoners whining about mere discomfort. WE ARE LOSING WEIGHT. We are not exercising normally and regularly due to lack of energy and for some, the BRAIN REGISTERING HUNGER creates LETHARGIC STATES so that very little exercise can be done. You no longer have the DRIVE that one needs to exercise properly and consistently and regularly. And your metabolism go into a "STOP-LOSS" mode to save fats and energy because the quantity of food is so small.

13) Add more to this two additional facts that innocuously contribute - the hard mats we are forced to sleep on don't let you sleep at all. Another design to punish and cultivate dependency on sleep/drugs/meds so they can control.

A very large percentage of prisoners who have been held in long term seg start taking sleep meds for various reasons. The hard matt is one. People like me who have convictions against meds/sleeping drugs must suffer with the lack of energy and sleep until the body gets so tired it shuts down and collects its overdue.

14) Now people can IGNORE this and take the attitude that we somehow deserve and need to suffer and be inflicted DAILY WITH HUNGER PANGS MORN AND NIGHT. But recognize the nature of any life form that is starved and tortured in this yoyo dieting method creates strange and unproductive reactions and counterproductive behaviors. The humans being becomes the human beast that DOC created. Have we learned nothing of what torturing prisoners like this induce? These human rights violations are sadistic in their very purpose and origin.

19) Body of principles for protection of ALL persons under any form of detention or imprisonment. Principles: 1,3,5,6,7.

22) The holding that unsafe conditions that pose an unreasonable risk of serious damage (the mental anguish building-up - Here at CCI) to prisoners future Health care Violate the 8th Amendment. (i.e. Weight Lost, suffering from that cause Decompensation from the torture that these games induce) Helling vs McKinney, 509 U.S. 25 at. 35 (1993).

28.) "Needs of Inmates who (work out) exercise must be considered (in food / caloric intake) Campbell vs Cauthron, 623 F.2d 503, 508-09 (8th ctr. 1980). They seem to feel here at CI, that reduction in oscillating food scale will maliciously, also by design and side goal, weaken "us" physically and mentally which is the goal for us on AC Status.

If we don't have enough food to generate the drive to exercise this reduction in food equal reduction in you being physically a threat. (Hyperbole such as, but Sadists are not Rational). Still more times exaggerated secret policy of reducing food as a means to reduce a perceived physical strength or another inferiority complex of prisoners being physically fit as dangerous or hard to control is not only dangerous but sadistic and calculated torture and a serious health hazard. And cannot be properly monitored nor ministered to an exact science without each tray being so specially separated, labelled, delivered and follow-up weigh-ins to monitor each prisoners intake and weight loss daily. Not the mass reduction and without care.

29. This Yo Yo Diet (one day sufficient portion and then following days skimming of calories) CONFUSE THE BRAIN & BODY in how it process and metabolize foods, sugars and cause a plethora of health problems like HIGH BLOOD (BLD) PRESSURE, HYPERTENSION, DIABETES, and infrequent exercise will slowly but eventually KILL US - which is what DOC/CCI desire to do to some of us on AC anyways.

30. Now add to this that us in AC status only receive Rec. (caged in outside to exercise in) four times a week in theory. But weather, fogs, and all other assortment of problems is always limiting these four days (no-make-ups, nor flexible schedules to accommodate bad weather by staff.) To where in the past month we only been outside the cells twice for rec. (We are in solitary for indefinite period of time). All meals are ate by 3:30 evening so night time last longer. They rush the eating time. It suppose to be 15 minutes, but some guards will pass food out, go down stairs for about five minutes (generously stated) and return. This fast eating makes even more hunger. So it's not the individual acts of yoyo diet that cause the torturous rage in people. It's the TOTALITY of the overall conditions that create and cause the deadly secret below that DOC/CCI officers know will result.

31) It is requested that whoever look into this health and human rights concern: When confronting DOC/CCI, please provide them a copy of this article to DOC/CCI or whomever so they can put forth their defense to what's being allege here in. If they retaliate, it will only show and prove the greater points and problems that exist and being alleged. Also, I'm already being tortured by the food reductions - plus AC status. Being silent is their ultimate goal. So silencing will not be my lot until they physically kill me.

We are human beings in here!

PS. Again, Hunger Pangs for short durations may seem harmless. But this is the norm here. No special Circumstances other than the objective to cheat, reallocation of funds, to inflict the unnecessary and wanton infliction of pain in a passive aggressive form of sadists. Rhodes vs Chapman, 4522 U.S. 337, 346 (1981).