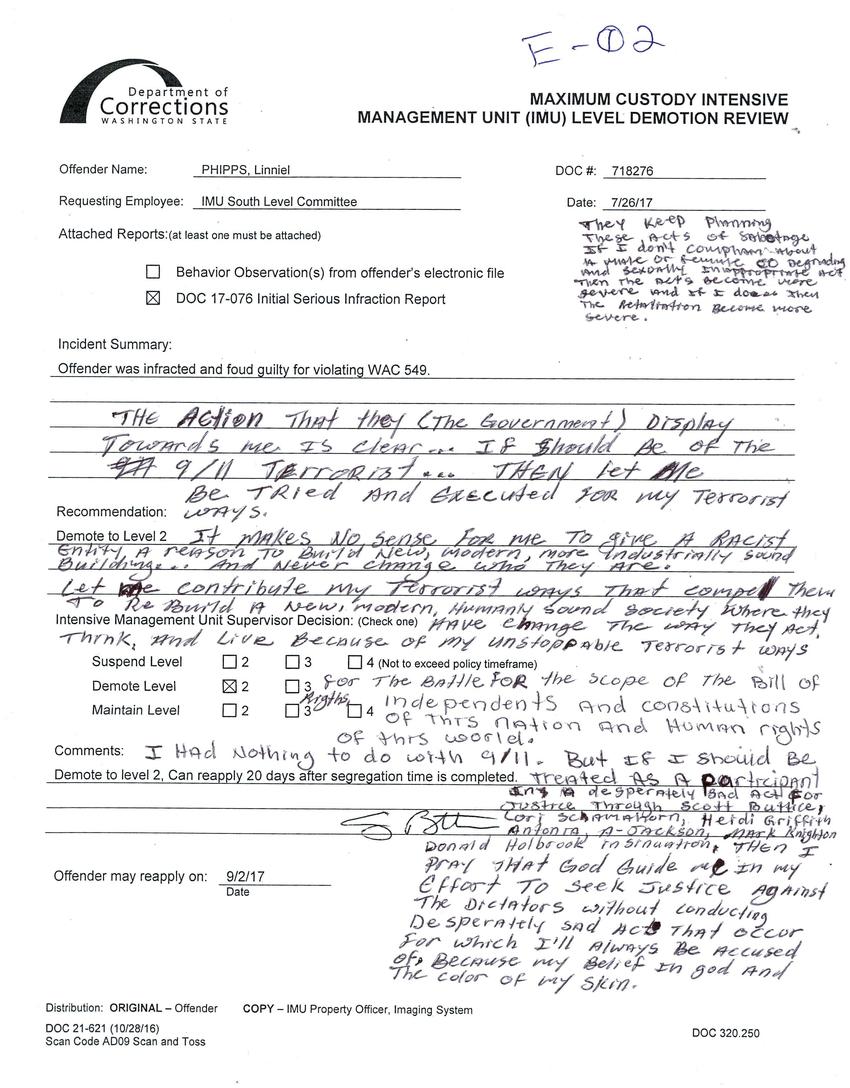 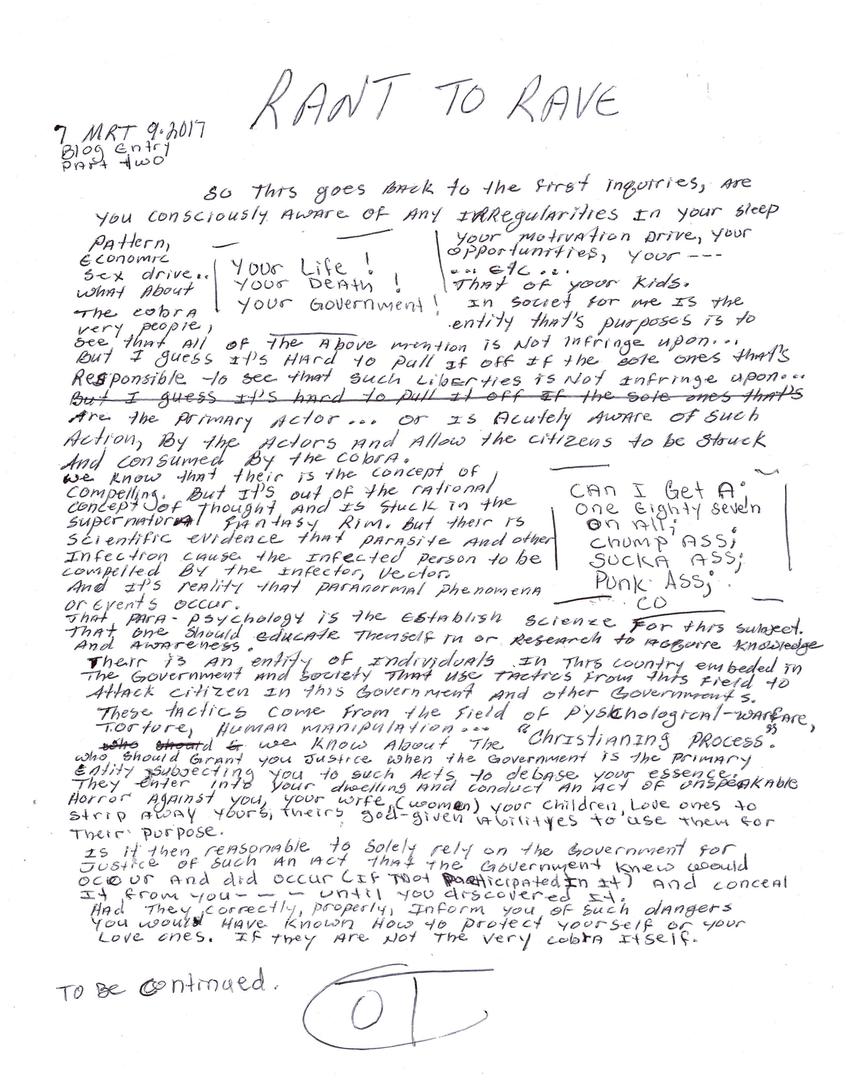 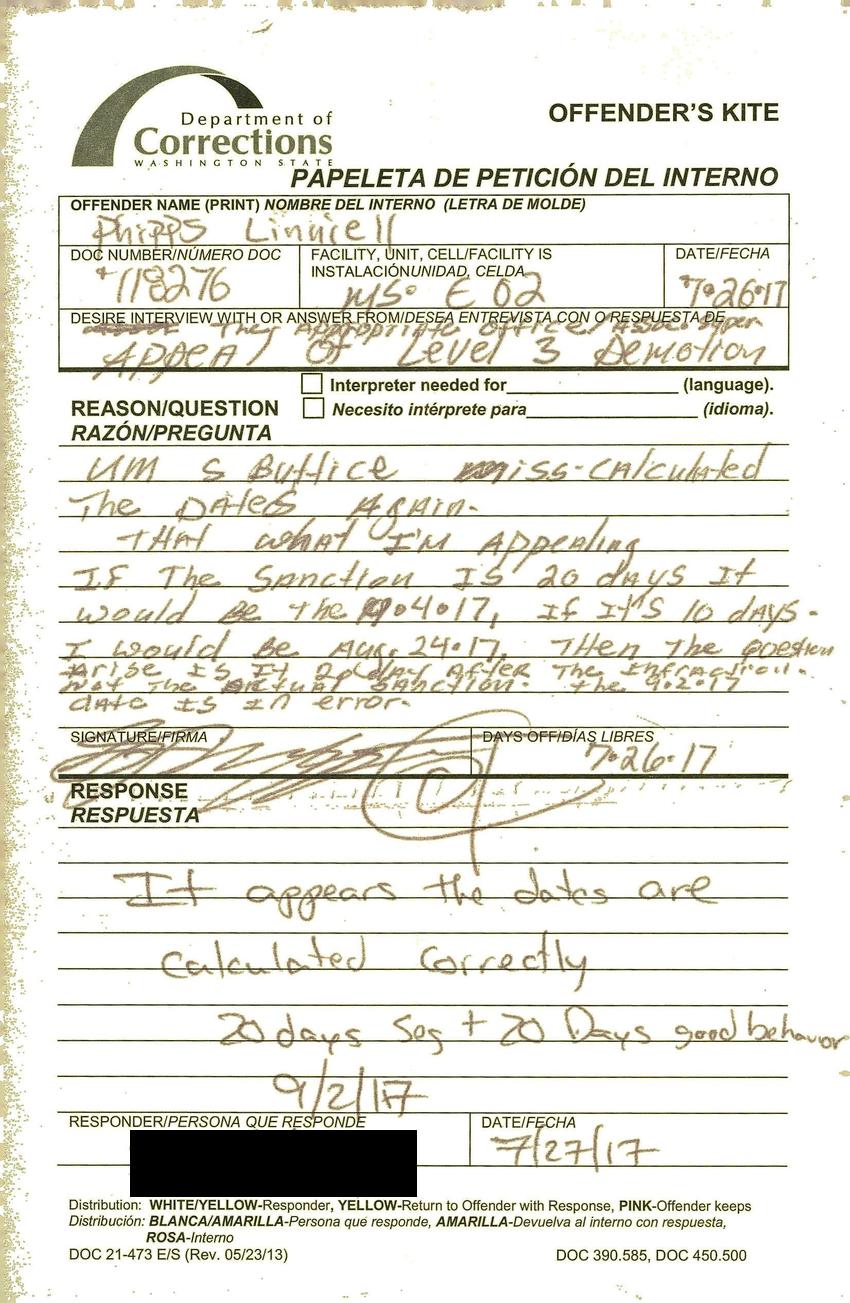 The action that they (the government) display towards me is clear... It should be of the 9/11 terrorist... then let me be tried and executed for my terrorist ways.

Recommendation:
Demote to Level 2
It makes no sense for me to give a racist entity a reason to build new, modern, more industrially sound building... and never change who they are.
Let me contribute my terrorist ways that compel them to rebuild a new, modern, humanly sound society where they have change the way they act, think, and live because of my unstoppable terrorist ways for the battle for the scope of the bill of independents and constitutions of this nation and human rights of this world.

Comments:
Demote to level 2, Can reapply 20 days after segregation time is completed.

I had nothing to do with 9/11. But if I should be treated as a participant in a desperately sad act of justice through Scott Buttice, Lori Schamahorn, Heidi Griffith, Antonia A Jackson, Mark Knighton, Donald Holbrook insinuation, then I pray that God guide me in my effort to seek justice against the dictators without conducting desperately sad act that occur for which I'll always be accused of, because my belief in God and the color of my skin.

So this goes back to the first inquiries, are you consciously aware of any irregularities in your sleep pattern, your motivation drive, your economic opportunities, your --- sex drive... etc... What about that of your kids. The cobra in society for me is the very people, entity that's purposes is to see that all of the above mention is not infringe upon... But I guess it's hard to pull it off if the sole ones that's responsible to see that such liberties is not infringe upon... are the primary actor... or is acutely aware of such action, by the actors and allow the citizens to be struck and consumed by the cobra. We know that their is the concept of compelling. But it's out of the rational concept of though and is stuck in the supernatural fantasy Rim. But their is scientific evidence that parasite and other infection cause the infected person to be compelled by the infector, Vector.
And it's reality that paranormal phenomena or events occur.
That para-psychology is the establish science for this subject. That one should educate themselves in or research to acquire knowledge and awareness.
Their is an entity of individuals in this country embedded in the government and society that use tactics from this field to attack citizen in this government and other governments. These tactics come from the field of psychological-warfare, torture, human manipulation...
We know about the "Christianizing Process" who should grant you justice when the government is the primary entity subjecting you to such acts to debase your essence. They enter into your dwelling and conduct an act of unspeakable horror against you, your wife, (women) your children love ones to strip away yours, theirs God-given abilities to use them for their purpose.
Is it then reasonable to solely rely on the Government for justice of such an act that the government knew would occur and did occur (if they participated in it) and conceal it from you --- until you discovered it.
And they correctly, properly, inform you of such dangers you would have known how to protect yourself or your love ones. Of they are not the very cobra itself.

Your Life!
Your Death!
Your Government!

Can I get a one eighty seven on all; chump ass; sucka ass; punk ass; co