Solution For The NFL (& Other) Protesters 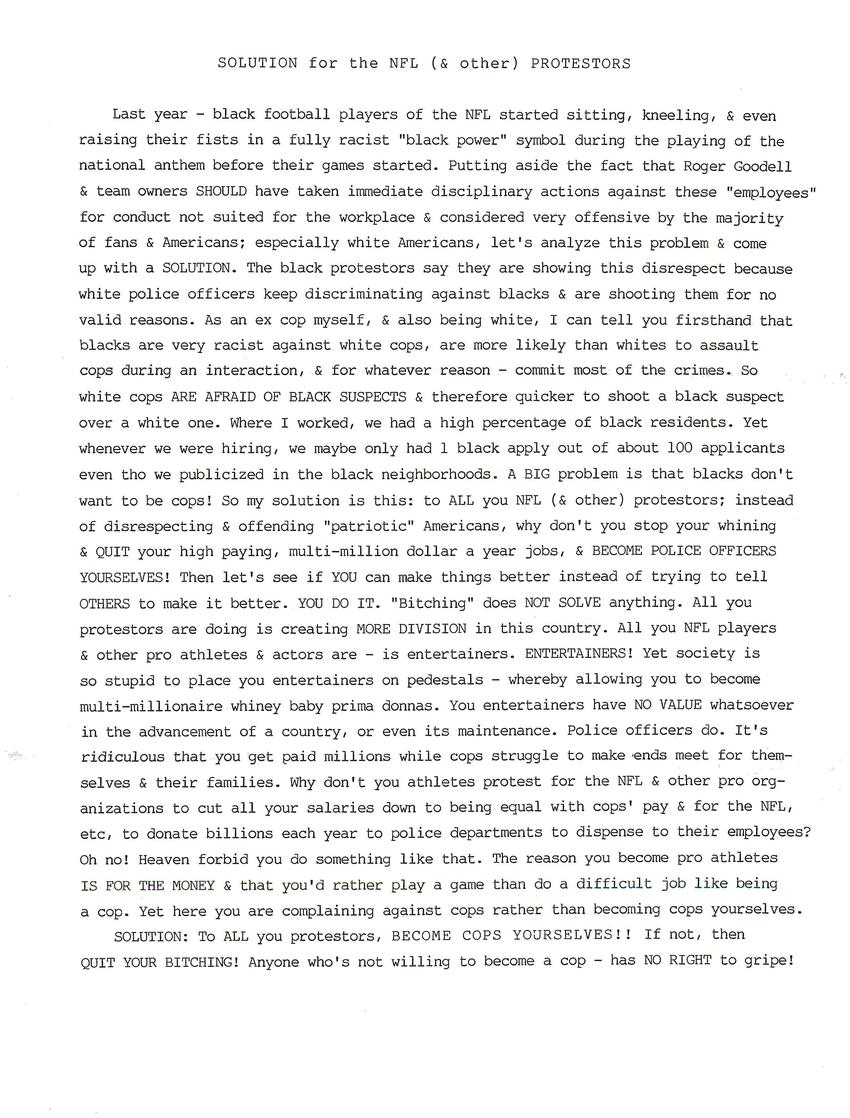 SOLUTION for the NFL (& other) PROTESTORS

Last year - black football players of the NFL started sitting, kneeling, & even raising their fists in a fully racist "black power" symbol during the playing of the national anthem before their games started. Putting aside the fact that Roger Goodell & team owners SHOULD have taken immediate disciplinary actions against these "employees" for conduct not suited for the workplace & considered very offensive by the majority of fans & Americans; especially white Americans, let's analyse this problem & come up with a SOLUTION. The black protestors say they are showing this disrespect because white police officers keep discriminating against blacks & are shooting them for no valid reasons. As an ex cop myself, & also being white, I can tell you firsthand that blacks are very racist against white cops, are more likely than whites to assault cops during an interaction, & for whatever reason - commit most of the crimes. So white cops ARE AFRAID OF BLACK SUSPECTS & therefore quicker to shoot a black suspect over a white one. Where I worked, we had a high percentage of black residents. Yet whenever we were hiring, we maybe only had 1 black apply out of about 100 applicants even tho we publicized in the black neighborhoods. A BIG problem is that blacks don't want to be cops! So my solution is this: to ALL you NFL (& other) protestors; instead of disrespecting & offending "patriotic" Americans, why don't you stop your whining & QUIT your high paying, multi-million dollar a year jobs, & BECOME POLICE OFFICERS YOURSELVES! Then let's see if YOU can make things better instead of trying to tell OTHERS to make it better. YOU DO IT. "Bitching" does NOT SOLVE anything. All you protestors are doing is creating MORE DIVISION in this country. All you NFL players & other pro athletes are - is entertainers. ENTERTAINERS! Yet society is so stupid to place you entertainers on pedestals - whereby allowing you to become multi-millionaire whiney baby prima donnas. You entertainers have NO VALUE whatsoever in the advancement of a country, or even its maintenance. Police officers do. It's ridiculous that you get paid millions while cops struggle to make ends meet for themselves & their families. Why don't you athletes protest for the NFL & other pro organizations to cut all your salaries down to being equal with cops' pay & for the NFL, etc, to donate billions each year to police departments to dispense to their employees? Oh no! Heaven forbid you do something like that. The reason you become pro athletes IS FOR THE MONEY & that you'd rather play a game than do a difficult job like being a cop. Yet here you are complaining against cops rather than becoming cops yourselves.
SOLUTION: To ALL you protestors, BECOME COPS YOURSELVES!! If not, then QUIT YOU BITCHING! Anyone who's not willing to become a cop - has NO RIGHT to gripe!