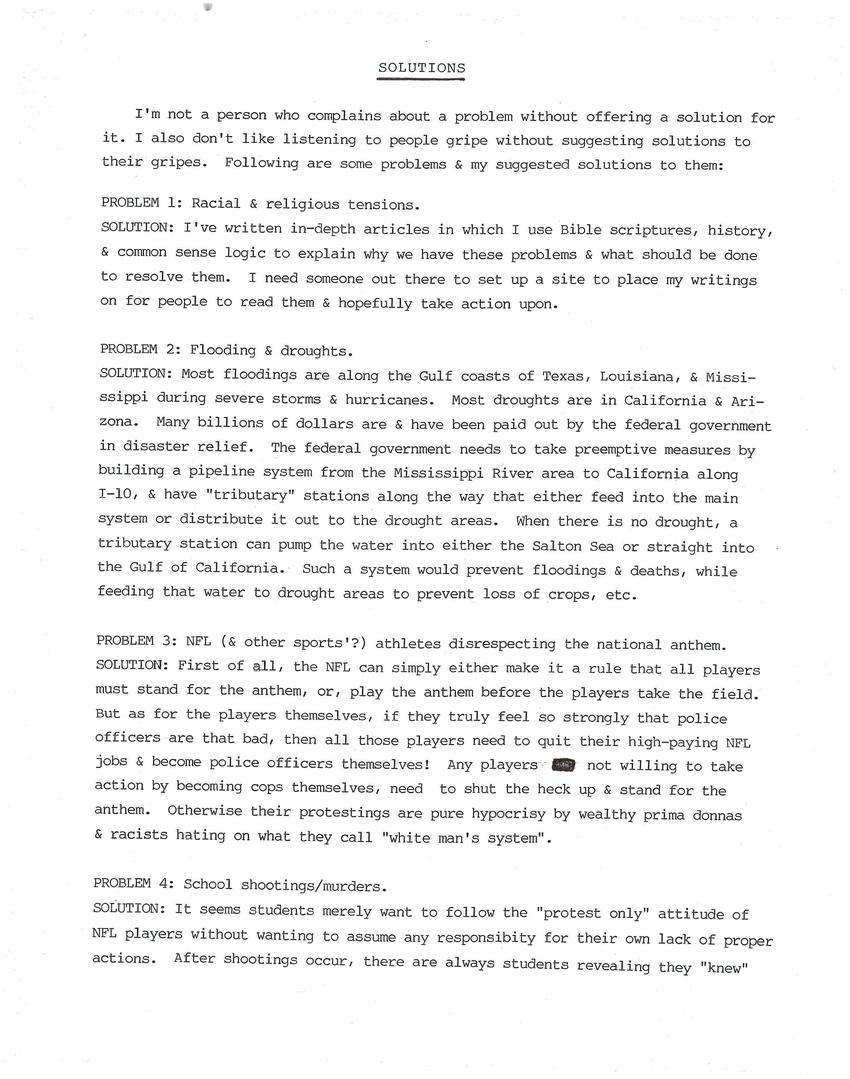 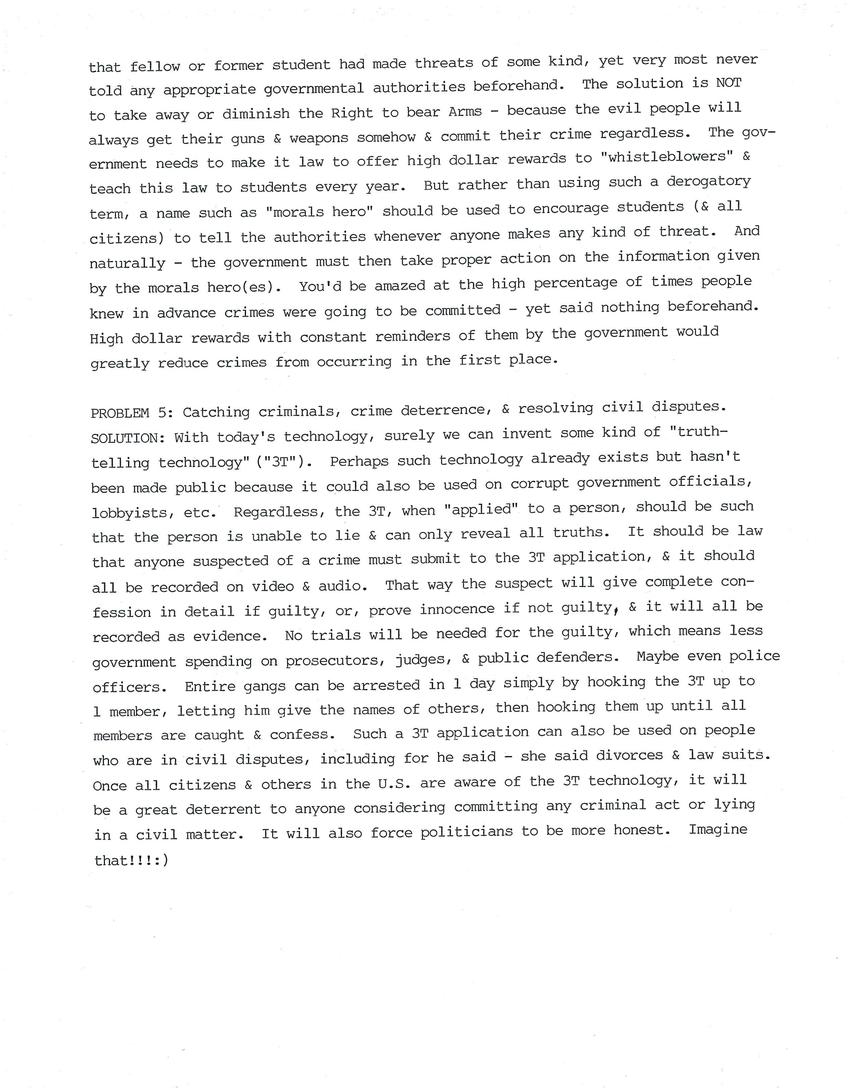 I'm not a person who complains about a problem without offering a solution for it. I also don't like listening to people gripe without suggesting solutions to their gripes. The following are some problems and my suggested solutions to them.

PROBLEM 1: Racial and social tensions
SOLUTION: I've written in-depth articles in which I use Bible scriptures, history, and commonsense logic to explain why we have these problems and what should be done to resolve them. I need someone out there to set up a site to place my writings for people to read and hopefully take action.

PROBLEM 2: Flooding and droughts
SOLUTION: Most floods are along the gulf coasts of Texas, Louisiana, and Mississippi during severe storms and hurricanes. Most droughts are in California and Arizona. Many billions of dollars are and have been paid out by the federal government in disaster relief. The federal government needs to take preemptive measures by building a pipeline system from the Mississippi River area to California along I-10 and have tributary stations along the way that either feed into the main system or distribute it out to the drought areas. When there is no drought, a tributary station can pump the water into either the Salton Sea or straight into the Gulf of California. Such a system would prevent floods and deaths, while feeding that water to drought areas to prevent loss of crops, etc.

PROBLEM 3: NFL (and other sports) athletes disrespecting the national anthem
SOLUTION: First of all, the NFL can simply either make it a rule that all players must stand for the anthem or play the anthem before the players take the field. But as for the players themselves, if they truly feel so strongly that police officers are that bad, then all these players need to quit their high paying NFL jobs and become police officers themselves! Any players not willing to take action by becoming cops themselves need to shut the heck up and stand for the anthem. Otherwise, their protests are pure hypocrisy by wealthy prima donnas and racists, hating on what they call "white man's system".

PROBLEM 4: School shootings and murders
SOLUTION: It seems students merely want to follow the "protest only" attitude of NFL players without wanting to assume any responsibility for their own lack of proper actions. After shootings occur, there are always students revealing they "knew" that fellow or former students had made threats of some kind, yet rarely told any appropriate government authorities beforehand.

The solution is NOT to take away or diminish the right to bear arms because the evil people will always get their guns and weapons somehow and commit their crimes regardless. The government needs to make it a law to offer high dollar rewards to whistle blowers and teach this law to students every year. But rather than using a derogatory, they can be called "moral heroes" who should encourage students (and all citizens) for the government to take proper action. You'd be amazed at the high percentage of times people knew in advance about crimes that were going to be committed yet said nothing beforehand. High dollar rewards with constant reminders of them by the government would greatly reduce crimes from occurring in the first place.

PROBLEM 5: Catching criminals, crime deterrence, and resolving civil disputes
SOLUTION: With today's technology, surely we can invent some kind of "truth telling technology" (3T). Perhaps such technology already exists but hasn't been made public because it could also be used on corrupt government officials, lobbyists, etc.

Regardless, the 3T, when applied to a person, should be so that the person is unable to lie and can only reveal all truths. It should be law that anyone suspected of a crime must submit to the 3T application, and it should be all recorded on video and audio. That way, the suspect will give complete confession in detail if guilty or proven innocent if not guilty, and it will all be recorded as evidence. No trials would be needed for the guilty, which means less government spending on prosecutors, judges, and public defenders. Maybe police officers.

Entire gangs can be arrested in one day simply by hooking the 3T up to one member, letting him give the names of others. Then hooking them up until all members are caught and confess. Such a 3T application can also be used on people who are in civil disputes, including for he said-she said divorces and law suits.

Once all citizens and others in the U.S. are aware of the 3T, it will be a great deterrence to anyone considering committing any criminal act or lying in a civil matter. It will also force politicians to be more honest. Imagine that! :)