Why Is Psychological Torture Not A Qualifer For Money Damages? 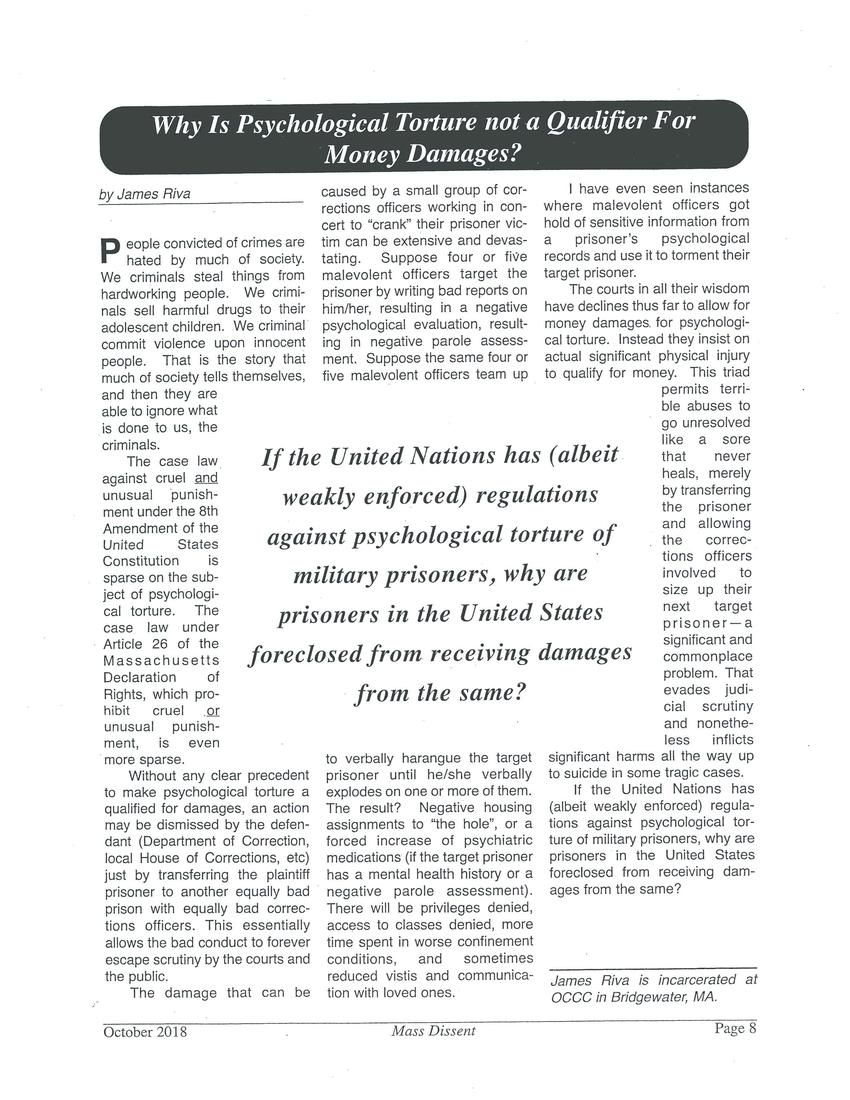 Why Is Psychological Torture not a Qualifier For Money Damages?
by James Riva

The case law against cruel and unusual punishment under the 8th Amendment of the United States Constitution is sparse on the subject of psychological torture. The case law under Article 26 of the Massachusetts Declaration of Rights, which prohibit cruel or unusual punishment, is even more sparse.

Without any clear precedent to make psychological torture a qualified for damages, an action may be dismissed by the defendant (Department of Correction, local House of Corrections, etc) just by transferring the plaintiff prisoner to another equally bad prison with equally bad corrections officers. This essentially allows the bad conduct to forever escape scrutiny by the courts and the public.

The damage that can be caused by a small group of corrections officers working in concert to “crank” their prisoner victim can be extensive and devastating. Suppose four or five malevolent officers target the prisoner by writing bad reports on him/her, resulting in a negative psychological evaluation, resulting in negative parole assessment. Suppose the same four or five malevolent officers team up to verbally harangue the target prisoner until he/she verbally explodes on one or more of them. The result? Negative housing assignments to “the hole”, or a forced increase of psychiatric medications (if the target prisoner has a mental health history or a negative parole assessment). There will be privileges denied, access to classes denied, more time spent in worse confinement conditions, and sometimes reduced visits and communication with loved ones.

I have even seen instances where malevolent officers got hold of sensitive information from a prisoner’s psychological records and use it to torment their target prisoner.

The courts in all their wisdom have declines thus far to allow for money damages for psychological torture. Instead they insist on actual significant physical injury to qualify for money. This triad permits terrible abuses to go unresolved like a sore that never heals, merely by transferring the prisoner and allowing the corrections officers involved to size up their next target prisoner —a significant and commonplace problem. That evades judicial scrutiny and nonetheless inflicts significant harms all the way up to suicide in some tragic cases.

If the United Nations has (albeit weakly enforced) regulations against psychological torture of military prisoners, why are prisoners in the United States foreclosed from receiving damages from the same?

James Riva is incarcerated at OCCC in Bridgewater, MA.

This is a good essay. I wish it was easier to spread the reality of incarceration and get people to care more for incarcerated people.
(scanned reply – view as blog post)
uploaded Dec. 27, 2018.  Original (PDF)

I agree whole heartedly! We tell people "you do the crime, you do the time"... and justly so. But the part that people don't see is when bad people are put in positions of power, they abuse the very people that are supposed to come out of their "time out" as rehabilitated citizens. Almost anyone with a diploma can become a corrections officer. And the uniform comes with a level of respect that is seldom earned. In my opinion, psychological abuse if one of the most damaging forms of abuse... because it's as invisible as it is impacting and lasting. I don't know what the answer is, but educating the public about these cruelties is certainly a good starting point. Thank you for writing!
(scanned reply – view as blog post)
uploaded Jan. 27, 2019.  Original (PDF)