Real Talk - the View of a Connecticut Prisoner Vol. 2 No. 6 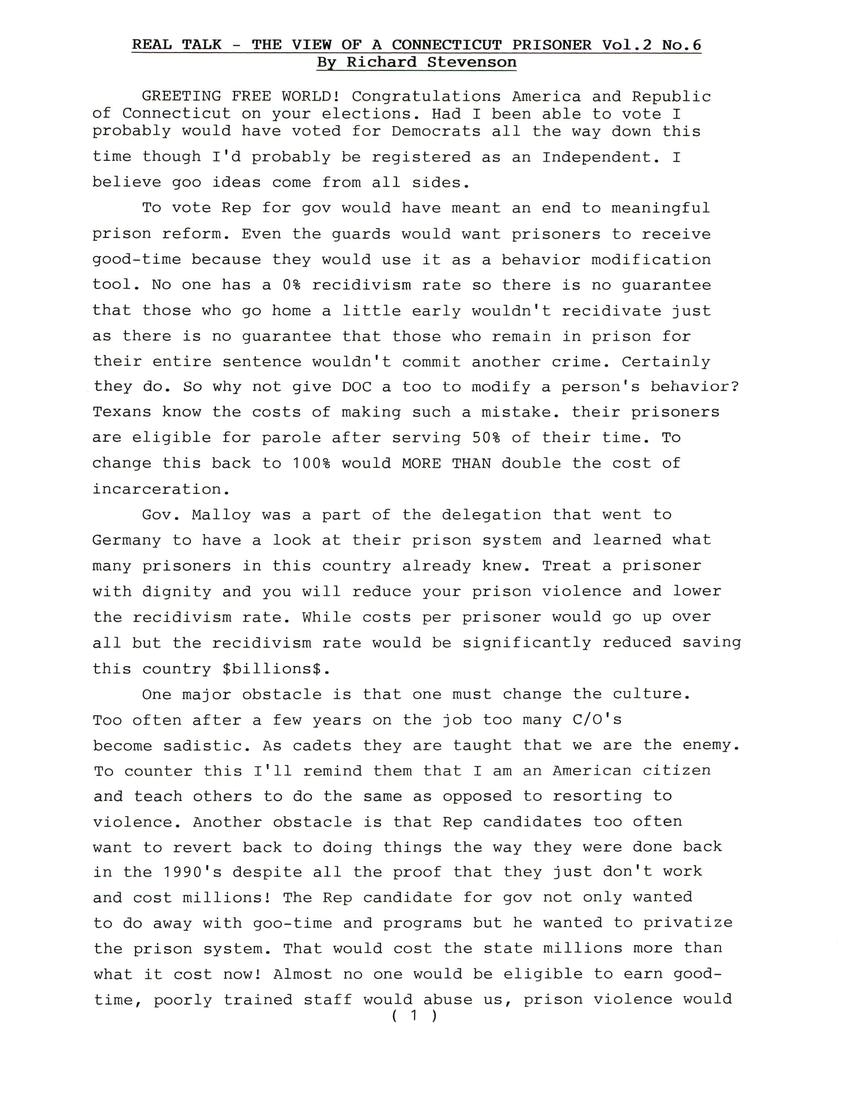 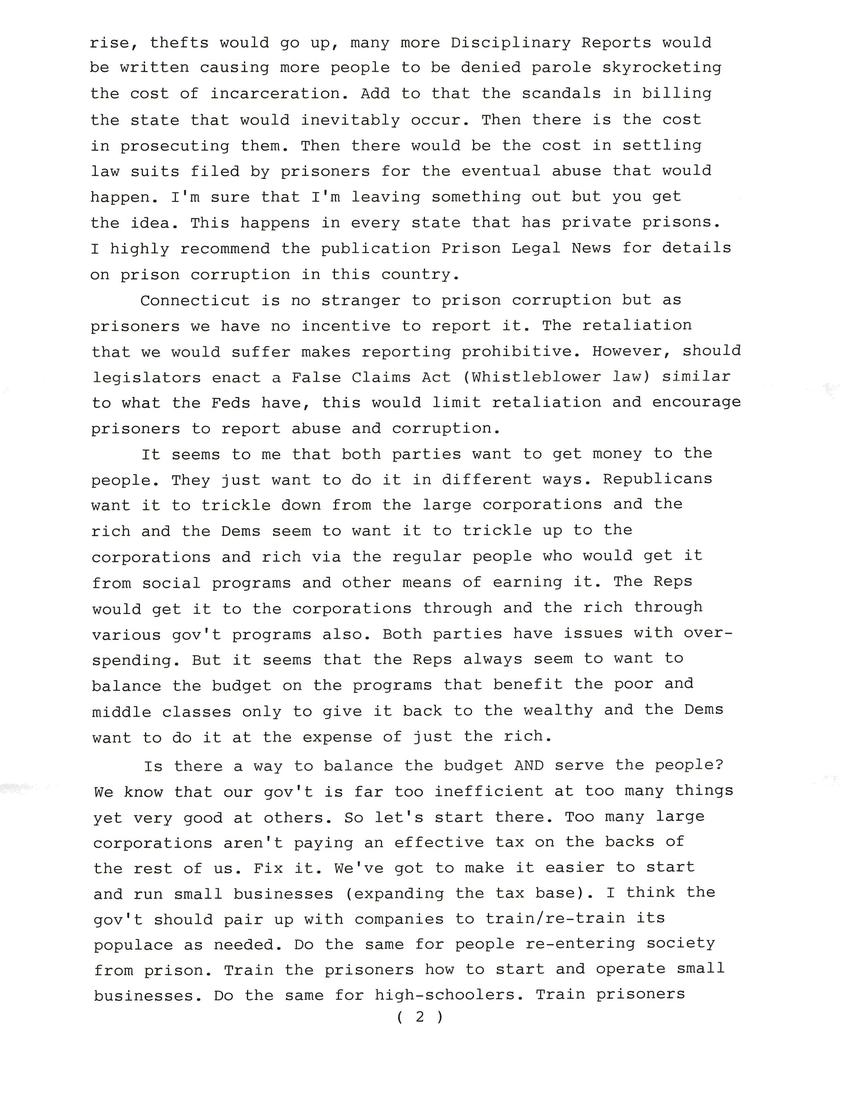 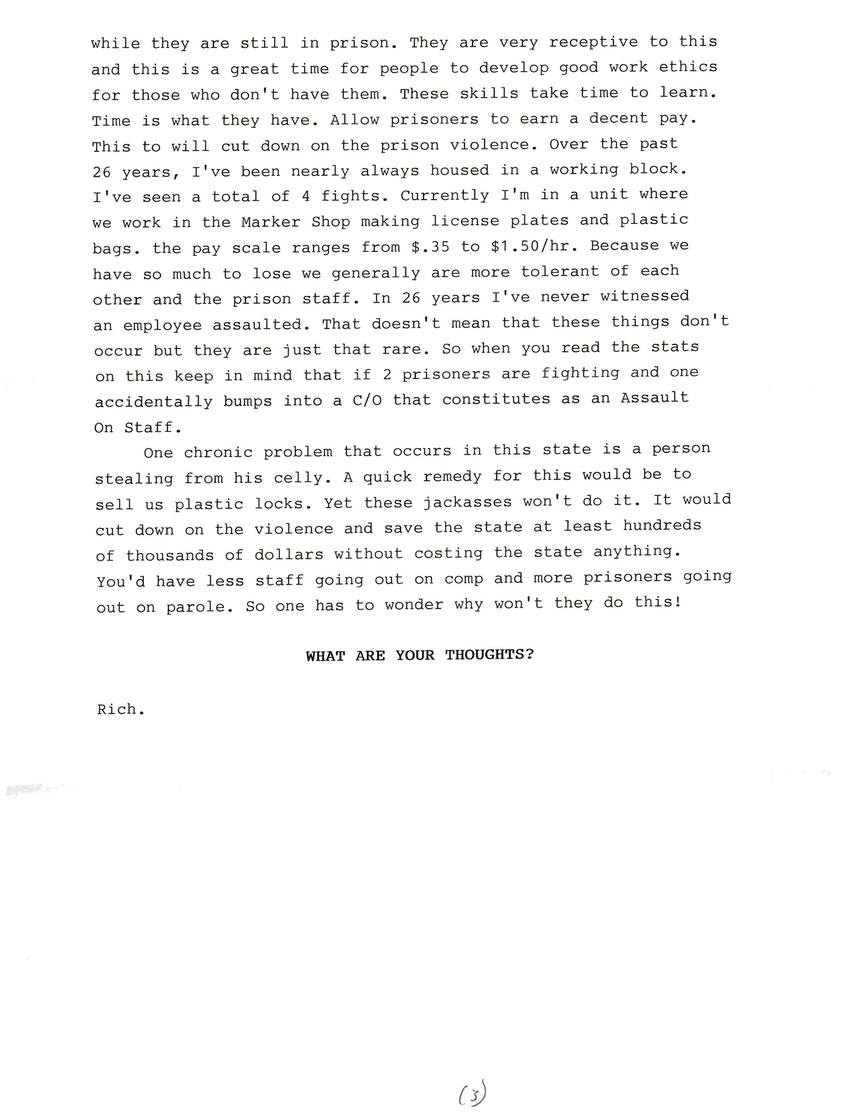 REAL TALK - THE VIEW OF A CONNECTICUT PRISONER Vol. 2 No. 6
By Richard Stevenson

Congratulations America and the Republic of Connecticut on your elections. Had I been able to vote, I probably would have voted for Democrats all the way down this time, though I'd probably be registered as an Independent. I believe good ideas come from all sides.

To vote Rep for governor would have meant an end to meaningful prison reform. Even the guards would want prisoners to receive good time because they would use it as a behavior modification tool. No one has a 0% recidivism rate, so there is no guarantee that those who go home a little early wouldn't relapse just as there is no guarantee that those who remain in prison for their entire sentence wouldn't commit another crime. Certainly they do. So why not give DOC a tool to modify a person's behavior? Texans know the costs of making such a mistake. Their prisoners are eligible for parole after serving 50% of their time. To change this back to 100% would MORE THAN double the cost of incarceration.

Gov. Malloy was a part of the delegation that went to Germany to have a look at their prison system and learned what many prisoners in this country already knew. Treat a prisoner with dignity, and you will reduce your prison violence and lower the recidivism rate. While costs per prisoner would go up over all, but the recidivism rate would be significantly reduced saving this country billions of dollars.

One major obstacle is that one must change the culture. Too often, after a few years on the job, too many COs become sadistic. As cadets, they are taught that we are the enemy. To counter this, I'll remind them that I am an American citizen and teach others to do the same as opposed to resorting to violence.

Another obstacle is that Rep candidates too often want to revert back to doing things the way they were done back in the 1990s, despite all the proof that they just don't work and cost millions! The Rep candidate for Gov. not only wanted to do away with good time and programs, but he wanted to privatize the prison system. That would cost the state millions more than what it costs now! Almost no one would be eligible to earn good time, poorly trained staff would abuse us, prison violence would rise, thefts would go up, many more disciplinary reports would be written, causing more people to be denied parole, skyrocketing the cost of incarceration. Add to that the scandals in billing the state that would inevitably occur. Then there is the cost in prosecuting them. Then there would be the cost in settling lawsuits filed by prisoners for the eventual abuse that would happen.

I'm sure that I'm leaving something out, but you get the idea. This happens in every state that has private prisons. I highly recommend the publication Prison Legal News for details on prison corruption in this country.

Connecticut is no stranger to prison corruption, but as prisoners, we have no incentive to report it. The retaliation that we would suffer makes reporting prohibitive. However, should legislators enact a False Claims Act (Whistleblower law), similar to what the Feds have, this would limit retaliation and encourage prisoners to report abuse and corruption.

It seems to me that both parties want to get money to the people. They just want to do it in different ways. Republicans want it to trickle down from the large corporations and the rich, and the Dems seem to want it to trickle up to the corporations and the rich via the regular people who would get it from social programs and other means of earning it. The reps would get it to the corporations through and the rich through various government programs. Both parties have issues with overspending, but it seems that the reps always seem to want to balance the budget on the programs that benefit the poor and middle classes only to give it back to the wealthy. The Dems want to do it at the expense of just the rich.

Is there a way to balance the budget AND serve the people? We know that our government is far too inefficient at too many things yet very good at others. So let's start there.

Too many large corporations aren't paying an effective tax on the backs of the rest of us. Fix it. We've got to make it easier to start and run small businesses (expanding the tax base). I think the government should pair up with companies to train and retrain its populace as needed. Do the same for people reentering society from prison. Train the prisoners how to start and operate small businesses. Do the same for high schoolers. Train prisoners while they are still in prison. They are very receptive to this, and this is a great time for people to develop good work ethics—for those who don't have them. These skills take time to learn. Time is what they have.

Allow prisoners to earn a decent pay. This will cut down on prison violence. Over the past 26 years, I've been nearly always housed in a working block. I've seen a total of four fights. Currently, I'm in a unit where we work in the marker shop, making license plates and plastic bags. The pay scale ranges from 35 cents to $1.50 per hour. Because we have so much to lose, we generally are more tolerant of each other and the prison staff. In 26 years, I've never witnessed an employee assaulted. That doesn't mean that these things don't occur, but they are just that rare.

So when you read the stats on this, keep in mind that if two prisoners are fighting and one accidentally bumps into a CO, that constitutes an assault on staff.

One chronic problem that occurs in this state is a person stealing from his celly. A quick remedy for this would be to sell us plastic locks. Yet these jackasses won't do it. It would cut down on the violence and save the state at least hundreds of thousand of dollars without costing the state anything. You'd have less staff going out on comp and more prisoners going out on parole. So one has to wonder why won't they do this!

WHAT ARE YOUR THOUGHTS?