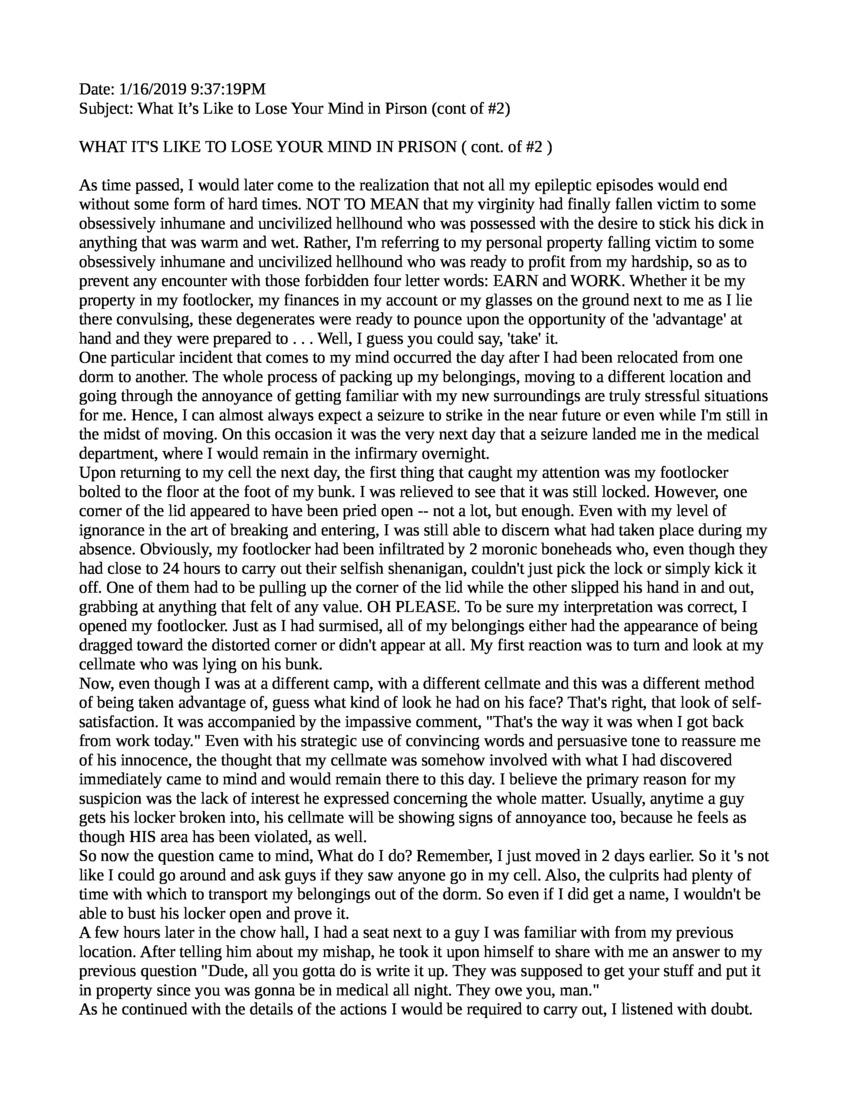 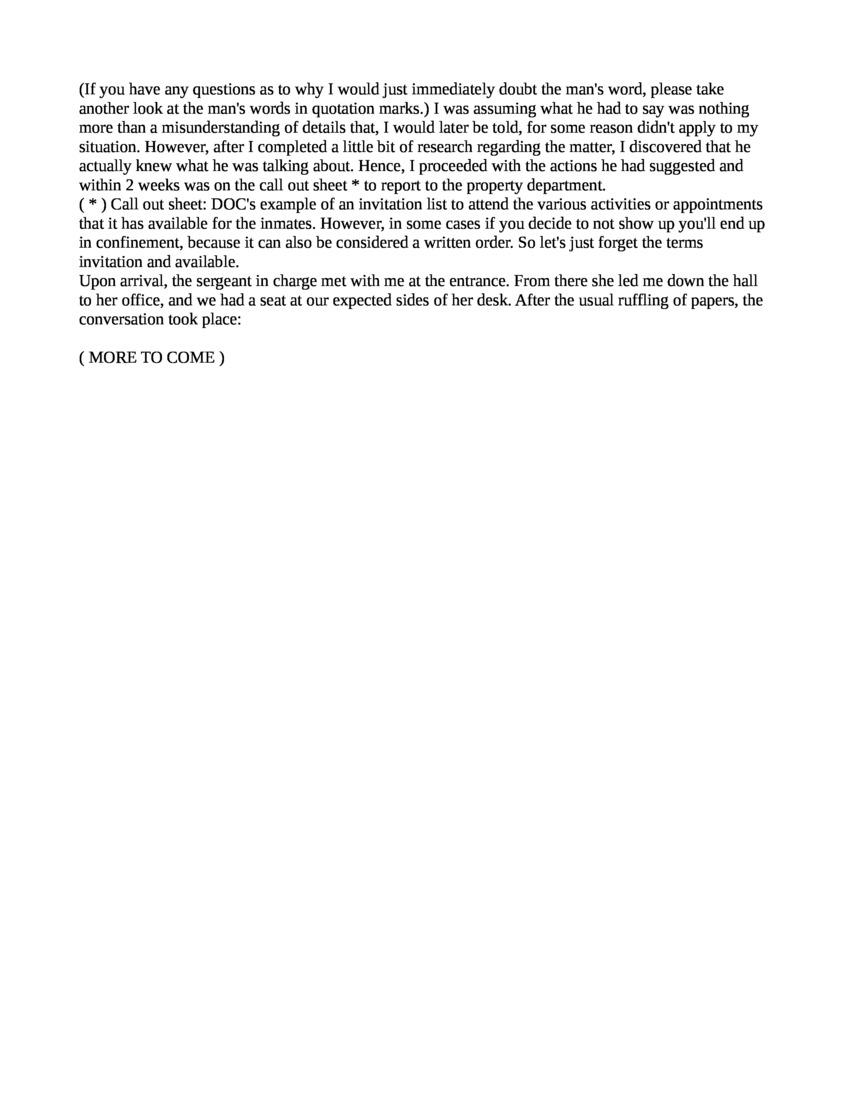 As time passed, I would later come to the realisation that not all my epileptic episodes would end without some form of hard times. NOT TO MEAN that my virginity had finally fallen victim to some obsessively inhumane and uncivilized hellhound who was possessed with the desire to stick his dick in anything that was warm and wet. Rather, I'm referring to my personal property falling victim to some obsessively inhumane and uncivilised hellhound who was ready to profit from my hardship, so as to prevent any encounter with those forbidden four letter words: EARN and WORK. Whether it be my property in my footlocker, my finances in my account or my glasses on the ground next to me as I like there convulsing, these degenerates were ready to pounce upon the opportunity of the 'advantage' at hand and they were prepared to...Well, I guess you could say, 'take' it.

One particular incident that comes to my mind occurred the day after I had been relocated from one dorm to another. The whole process of packing up my belongings, moving to a different location and going through the annoyance of getting familiar with my new surroundings are truly stressful situations for me. Hence, I can almost always expect a seizure to strike in the near future or even while I'm still in the midst of moving. On this occasion it was the very next day that a seizure landed me in the medical department, where I would remain in the infirmary overnight.

Upon returning to my cell the next day, the first thing that caught my attention was my footlocker bolted to the floor at the foot of my bed. I was relieved to see that it was still locked. However, one corner of the lid appeared to have been pried open - not a lot, but enough. Even with my level of ignorance in the art of breaking and entering, I was still able to discern what had taken place during my absence. Obviously, my footlocker had been infiltrated by 2 moronic boneheads who, even though they had close to 24 hours to carry out their selfish shenanigan, couldn't just pick the lock or simply kick it off. One of them had to be pulling up the corner of the lid while the other slipped his hand in and out, grabbing at anything that felt of any value. OH PLEASE. To be sure my interpretation was correct, I opened my footlocker. Just as I had surmised, all of my belongings either had the appearance of being dragged toward the distorted corner or didn't appear at all. My first reaction was to turn and look at my cellmate who was lying on his bunk.

Now, even though I was at a different camp, with a different cellmate and this was a different method of being taken advantage of, guess what kind of look he had on his face? That's right, that look of self satisfaction. It was accompanied by the impassive comment, "That's the way it was when I got back from work today." Even with his strategic use of convincing words and persuasive tone to reassure me of his innocence, the thought that my cellmate was somehow involved with what I had discovered immediately came to mind and would remain there to this day. I believe the primary reason for my suspicion was the lack of interest he expressed concerning the whole matter. Usually, anytime a guy gets his locker broken into, his cellmate will be showing signs of annoyance too, because he feels as if HIS area has been violated, as well.

So now the question came to mind, What do I do? Remember, I just moved in 2 days earlier. So it's not like I could go around and ask guys if they saw anyone go into my cell. Also, the culprits had plenty of time with which to transport my belongings out of the dorm. So even if I did get a name, I wouldn't be able to burst his locker open, and prove it.

A few hours later in the chow hall, I had a seat next to a guy I was familiar with from my previous location. After telling him about my mishap, he took it upon himself to share with me an answer to my previous question "Dude, all you gotta do is write it up. They was supposed to get your stuff and put it in property since you was gonna be in medical all night. They owe you, man."

As he continued with the details of the actions I would be required to carry out, I listened with doubt. (If you have any questions as to why I would just immediately doubt the man's word, please take another look at the man's words in quotation marks.) I was assuming what he had to say was nothing more than a misunderstanding of details that, I would later be told, for some reason didn't apply to my situation. However, after I completed a little bit of research regarding the matter, I discovered that he actually knew what he was talking about. Hence, I proceeded with the actions he had suggested and within 2 weeks was on the call out sheet * to report to the property department.

(*)Call out sheet: DOC's example of an invitation list to attend the various activities or appointments that it has available for the inmates. However, in some cases if you decide not to show up you'll end up in confinement, because it can also be considered a written order. So let's just forget the terms invitation and available.

Upon arrival, the sergeant in charge met with me at the entrance. From there she led me down the hall to her office, and we had a seat at our expected sides of her desk. After the usual ruffling of papers, the conversation took place:

Eric,
This is Jessica reaching out to you. I know you know which one. I'm not sure if you got the last letter I mailed to you, but I would like to hear from you again. You can reach out to me at the A-36 address. I just don't get online too often. I look forward to your response.