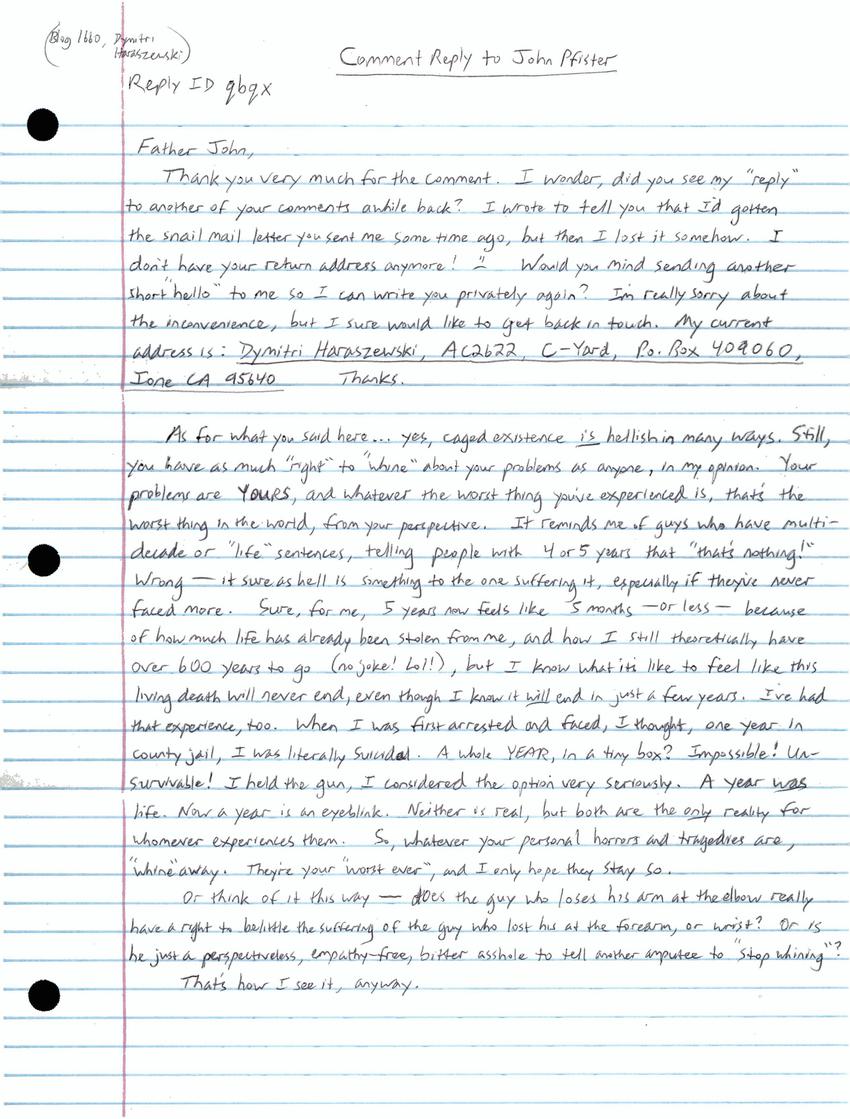 Father John,
Thank you very much for the comment. I wonder, did you see my reply to another of your comments a while back? I wrote to you that I'd gotten the snail mail letter you sent me some time ago. But then I lost it somehow. I don't have your return address anymore! :( Would you mind sending another short hello to me so I can write you privately again? I'm really sorry about the inconvenience, but I sure would like to get back in touch.

As for what you said here, yes, caged existence is hellish in many ways. Still, you have as much right to "whine" about your problems as anyone, in my opinion. Your problems are yours, and whatever the worst thing you've experienced is—that's the worst thing in the world from your perspective.

It reminds me of guys who have multi-decade or life sentences, telling people with four or five years that, "That's nothing!" Wrong. It sure as hell is something to the one suffering it, especially if they've never faced more. Sure, for me, five years now feels like five months—or less—because of how much life has already been stolen from me, and how I still theoretically have over 600 years to go (no joke, LOL!). But I know what it's like to feel like this living death will never end, even though I know it will end in just a few years. I've had that experience too.

When I was first arrested and faced, I thought, "one year in county jail," I was literally suicidal. A whole YEAR in a tiny box? Impossible! Unsurvivable! I held the gun, I considered the option very seriously. A year was life. Now, a year is an eye blink.

Neither is real, but both are the only reality for whomever experiences them. So whatever your personal horrors and tragedies are, "whine" away. They're your "worst ever," and I only hope they stay so.

Or think of it this way—does the guy who loses his arm at the elbow really have a right to belittle the suffering of the guy who lost his at the forearm, or worst? Or is he just a perspective-less, empathy-free, bitter asshole to tell another amputee to "stop whining"?

That's how I see it, anyway.