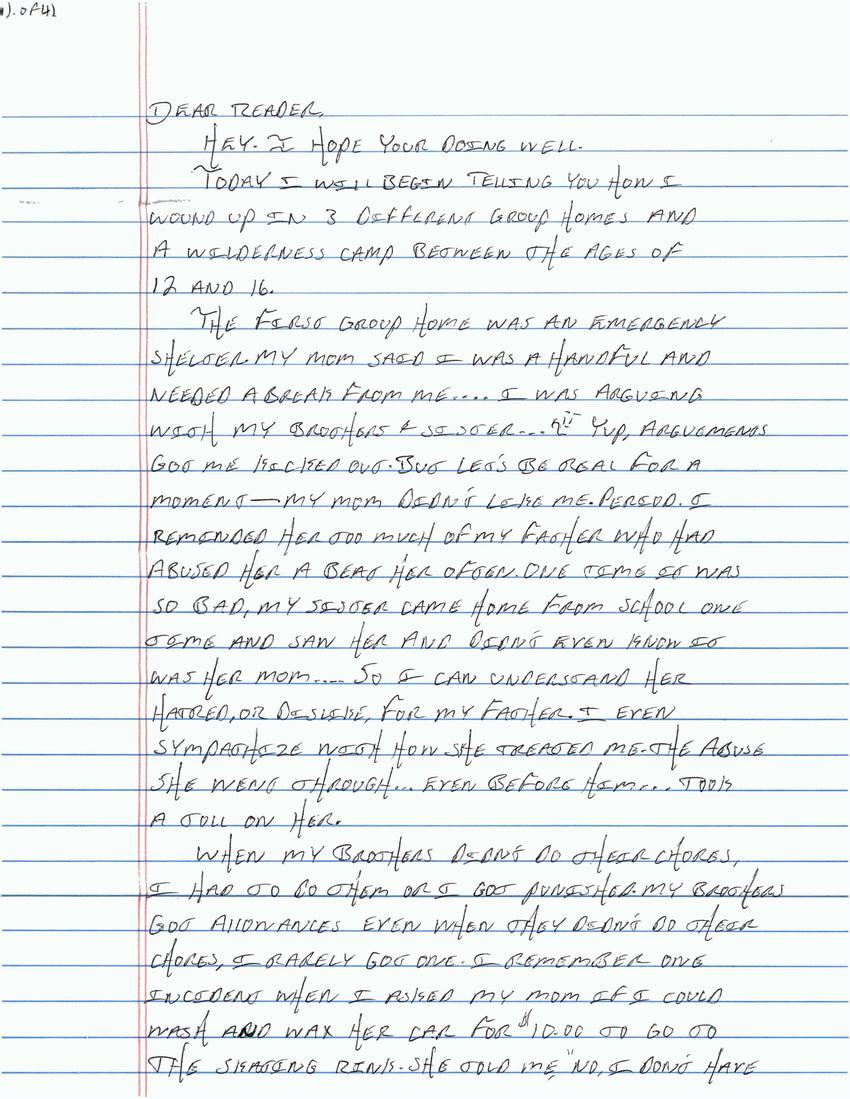 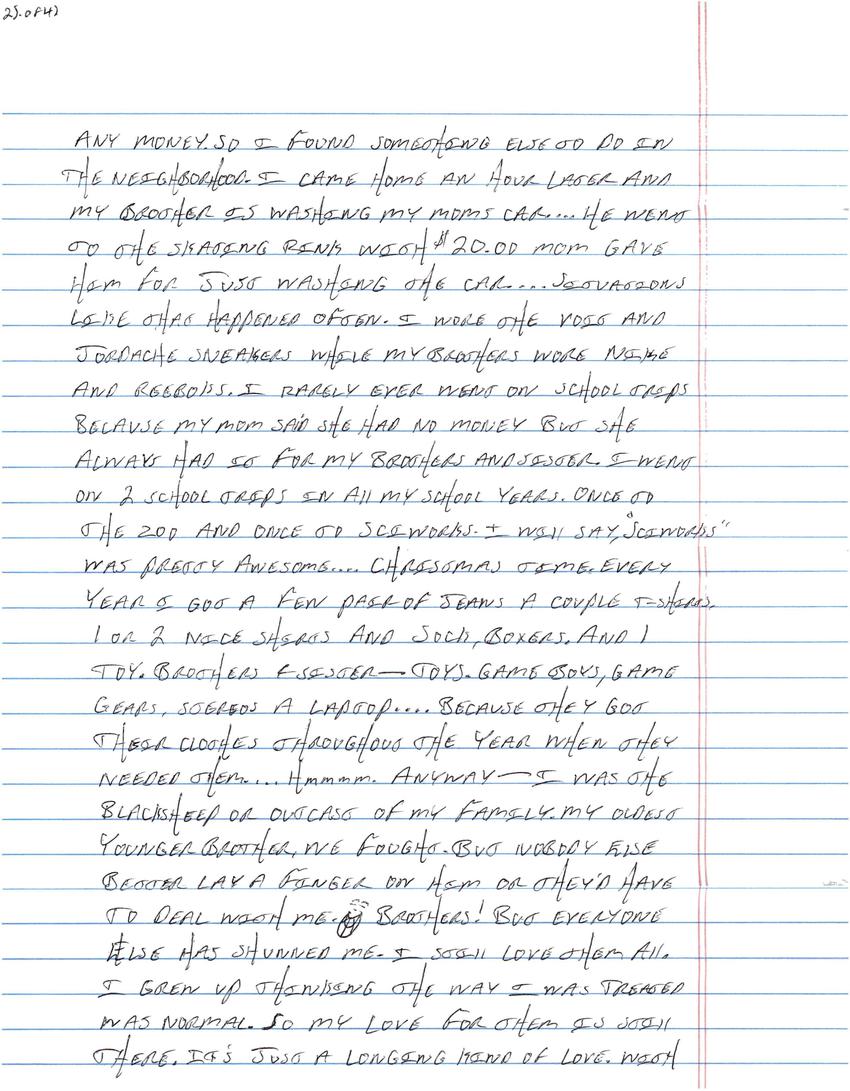 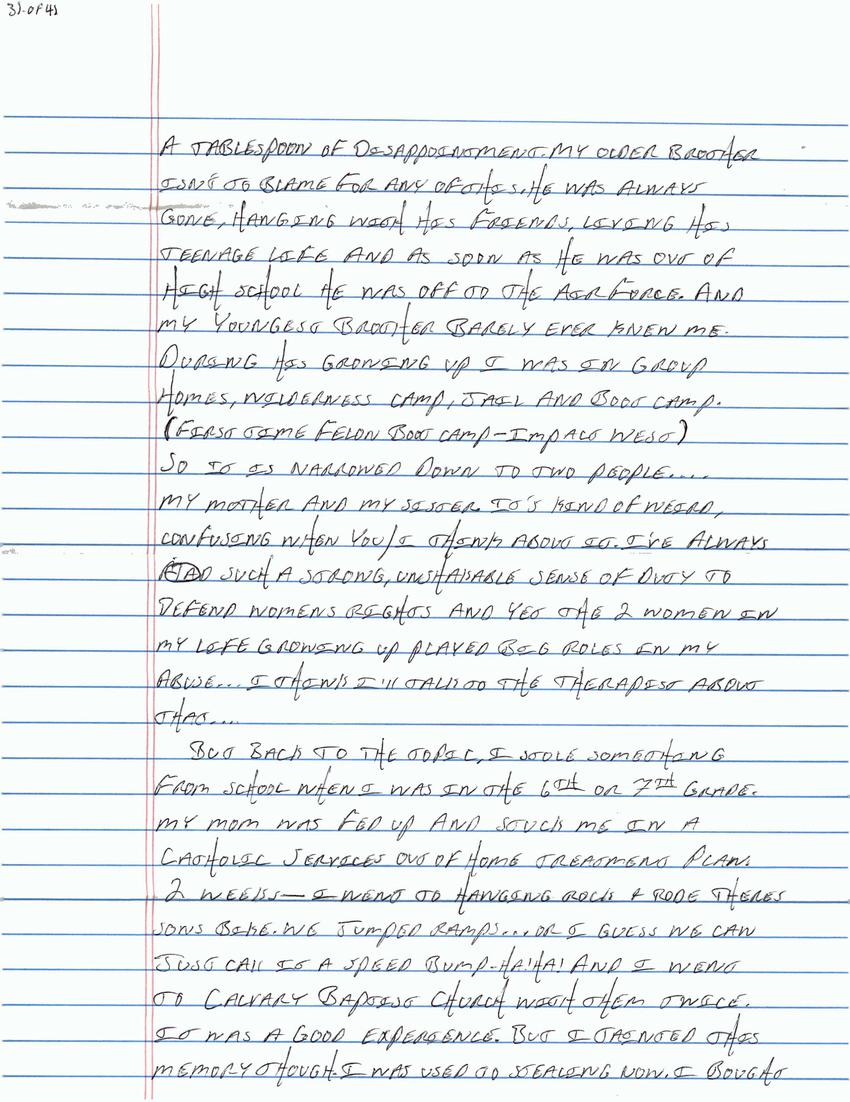 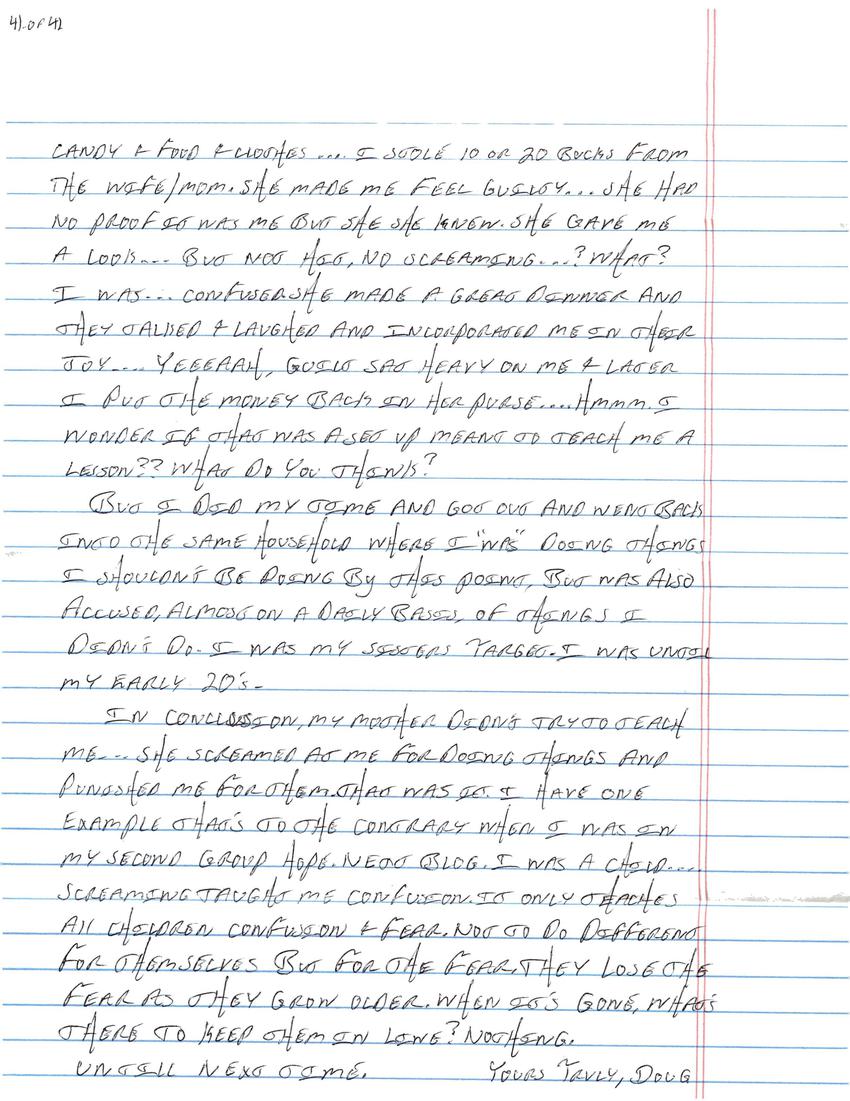 Hey. I hope you're doing well.

Today I will begin telling you how I wound up in 3 different group homes and a wilderness camp between the ages of 12 and 16.

The first group home was an emergency shelter. My mom said I was a handful and needed a break from me... I was arguing with my brothers & sister... :/ Yup, arguments got me kicked out. But let's be real for a moment- my mom didn't like me. Period. I reminded her too much of my father who had abused her and beat her often. One time it was so bad, my sister came home from school one time and saw her and didn't even know it was her mom... So I can understand her hatred, or dislike, for my father. I even sympathize with how she treated me. The abuse she went through... even before him... took a toll on her.

When my brothers didn't do their chores, I had to do them or I got punished. My brothers got allowances even when they didn't do their chores, I rarely got one. I remember one incident when I asked my mom if I could wash and wax her car for $10.00 to go to the skating rink. She told me "No, I don't have any money". So I found someone else's to do in the neighborhood. I came home an hour later and my brother is washing my mom's car... he went to the skating rink with $20.00 mom gave him for just washing the car... Situations like that happened often. I wore the Voio and Jordache sneakers while my brothers wore Nike and Reeboks. I rarely ever went on school trips because my mom said she had no money but she always had it for my brothers and sister. I went on 2 school trips in all my school years. Once to the zoo and once to Sciworks. I will say "Sciworks" was pretty awesome... Christmas time every year I got a few pairs of jeans, a couple of T-shirts, 1 or 2 nice shirts and socks, boxers, and 1 toy. Brothers & sister- toys. Game boys, game gears, even a laptop... because they got their clothes throughout the year when they needed them... Hmmmmm. Anyway- I was the black sheep or outcast of my family. My oldest younger brother, we fought. But nobody else better lay a finger on him or they'd have to deal with me. :D Brothers! But everyone else has shunned me. I still love them all. I grew up thinking the way I was treated was normal. So my love for them is still there. It's just a longing kind of love. With a tablespoon of disappointment. My older brother isn't to blame for any of this. He was always gone, hanging with his friends, living his teenage life and as soon as he was out of high school he was off to the Air Force. And my youngest brother barely ever knew me. During his growing up I was in group homes, wilderness camp, jail and boot camp(First Time Felon Boot Camp- Impact West) So it is narrowed down to two people... my mother and my sister. It's kind of weird, confusing when you/I think about it. I've always had such a strong, unshakable sense of duty to defend women's rights and yes the 2 women in my life growing up played big roles in my abuse... I think I'll talk to the therapist about that...

But back to the topic. I stole something from school when I was in the 6th or 7th grade. My mom was fed up and stuck me in a Catholic services out of home treatment plan. 2 weeks- I went to hanging rock & rode their son's bike. We jumped ramps... or I guess we can just call it a speed bump- Ha!Ha! And I went to Calvary Baptist Church with them twice. It was a good experience. But I jagnoted this memory though. I was used to stealing now. I bought candy & food & clothes... I stole 10 or 20 bucks from the wife/mom. She made me feel guilty... she had no proof it was me but she knew. She gave me a look... but no hit, no screaming...? What? I was... confused. She made a great dinner and they talked & laughed and incorporated me in their joy... yeeeaaah. Guilt sat heavy on me & later I put the money back in her purse... hmmm. I wonder if that was meant to teach me a lesson?? What do you think?

But I did my time and got out and went back into the same household where I "was" doing things I shouldn't be doing by this point. But was also accused, almost on a daily basis, of things I didn't do. I was my sister's target. I was until my early 20's.

In conclusion, my mother didn't try to teach me... she screamed at me for doing things and punished me for them. That was it. I have one example that's to the contrary when I was in my second group home. Next blog. I was a child... screaming taught me confusion & fear. Not to do different for themselves but for the fear. They lose the fear as they grow older. When it's gone, what's there to keep them in line? Nothing.

Hi Doug, this is my second transcription for you. Thank you for sharing your story with the world. My heart hurts for you as a child in the past- I wish I could tell him he was perfect and just as loveable as his siblings. You have a kind smile. I admire your forgiveness. I wish you a good day.
Best, Erica