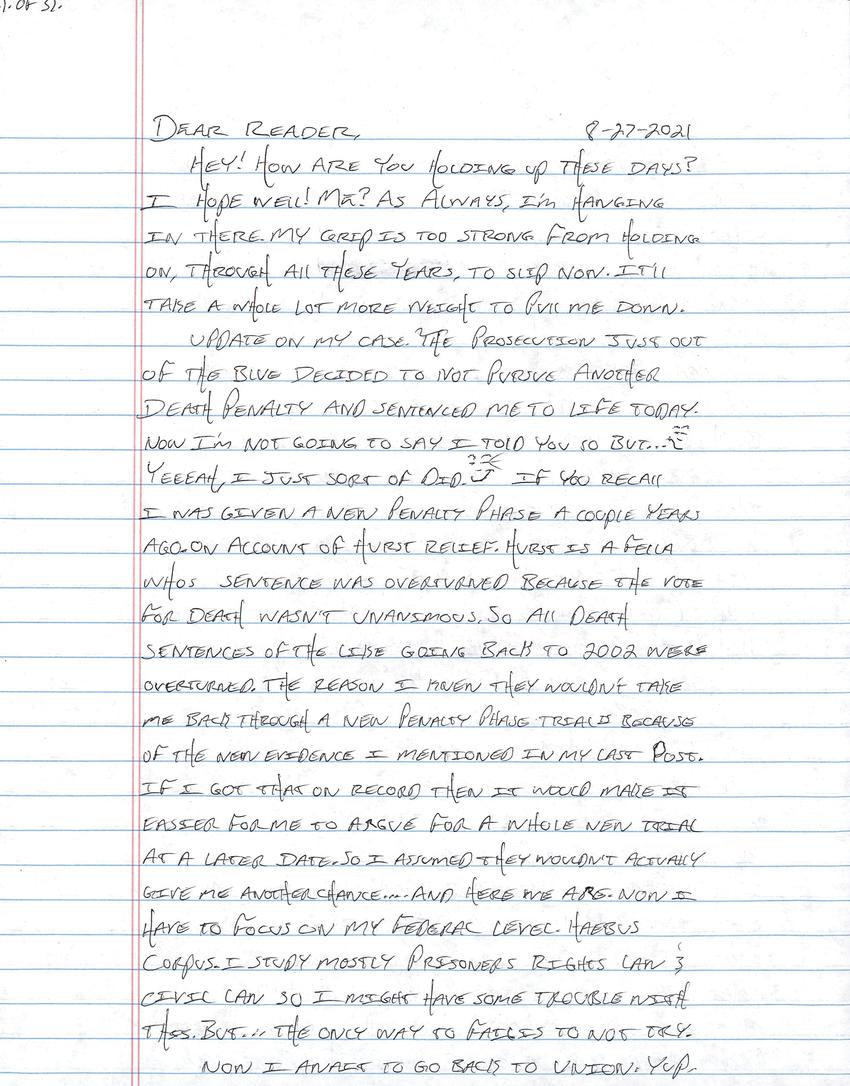 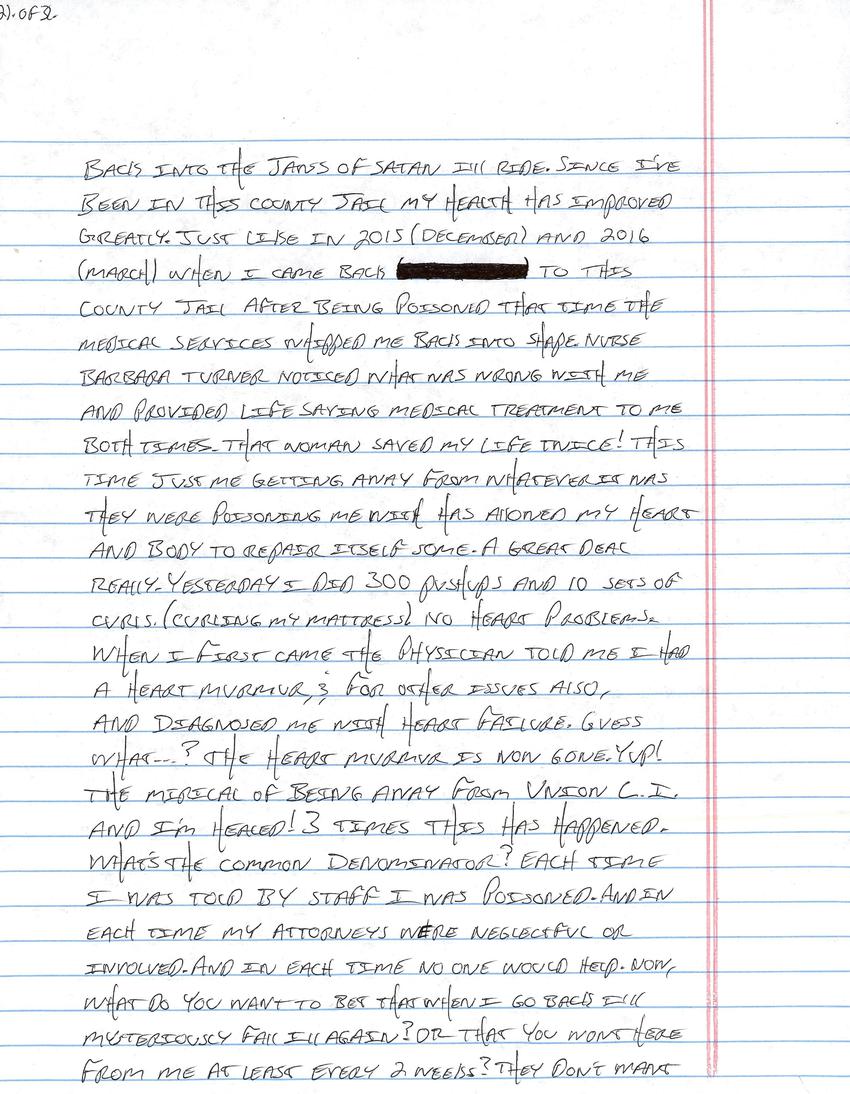 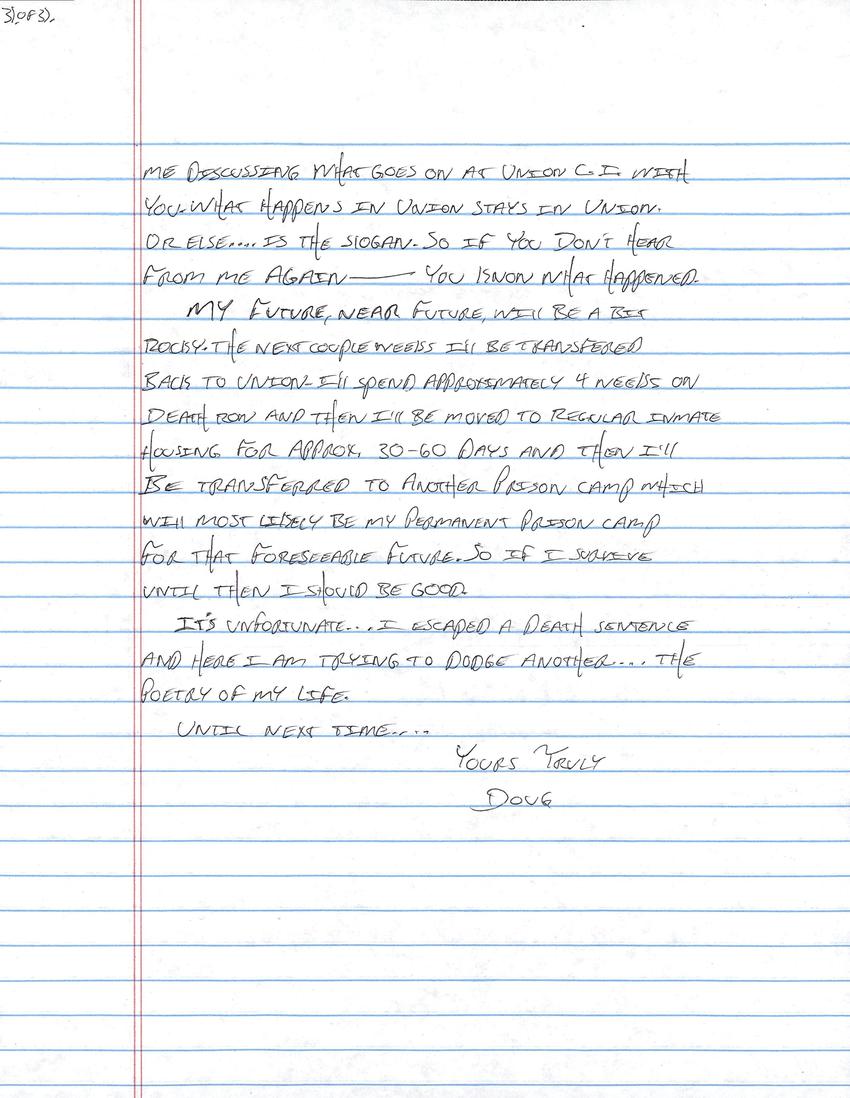 Hey! How are you holding up these days? I hope well! Ma? As always, I'm hanging in there. My grip is too strong from holding on, through all these years, to slip now. It'll take a whole lot more weight to pull me down.

Update on my case. The prosecution just out of the blue decided not to pursue another death penalty and sentenced me to life today. Now I'm not going to say I told you so but.. yeaaah I just sort of did. If you recall I was given a new penalty phase a couple years ago. On account of Hurst relief. Hurst is a fella who's sentence was overturned because the vote for death wasn't unanimous. So all death sentences of the like going back to 2002 were overturned. The reason I knew they wouldn't take me back through a new penalty phase trial is because of the new evidence I mentioned in my last post. If I got that on record then it would make it easier for me to argue for a whole new trial at a later date. So I assumed they wouldn't actually give me another chance... and here we are. Now I have to focus on my federal level. Habeas Corpus. I study mostly prisoner's rights law & civil law so I might have some trouble with this. But... the only way to fail is to not try.

Now I await to go back to union. Yup. Back into the jaws of Satan I'll ride. Since I've been in this country jail my health has improved greatly. Just like in 2015 (December) and 2016 (March) when I came back [redacted] to this county jail after being poisoned that time the medical services whipped me back into shape. Nurse Barbara Turner noticed what was wrong with me and provided life saving medical treatment to me both times. That woman saved my life twice! This time just me getting away from whatever it was they were poisoning me with has allowed my heart and body to repair itself some. A great deal really. Yesterday I did 300 push ups and 10 sets of curls (curling my mattress.) No heart problems. When I first came the physician told me I had a heart murmur, & for other issues also, and diagnosed me with heart failure. Guess what...? The heart murmur is gone. Yup! The miracle of being away from Union C.I. And I'm healed! 3 times this has happened. What's the common denominator? Each time I was told by staff I was poisoned. And in each time my attorneys were neglectful for involved. And in each time no one would help. Now, what do you want to bet that when I go back I'll mysteriously fall ill again? Or that you won't hear from me at least every 2 weeks? They don't want me discussing what goes on at Union C.I. with you. What happens in Union stays in Union. Or else... is the slogan. So if you don't hear from me again -- you know what happened.

My future, near future, will be a bit rocky. The next couple weeks I'll be transferred back to Union. I'll spend approximately 4 weeks on death row and then I'll be moved to regular inmate housing for approx. 30-60 days and then I'll be transferred to another prison camp which will most likely be my permanent prison camp for that foreseeable future. So if I survive until then I should be good.

It's unfortunate... I escaped a death sentence and here I am trying to dodge another... the poetry of my life.

Hi Doug, I finished the transcription for your post. I wish you the best... I hope wherever you are now, you can make the most of your situation and are healthy. Stay occupied, and more importantly engaged with the life you are in. It only comes once.