Greetings 2 All U Good People 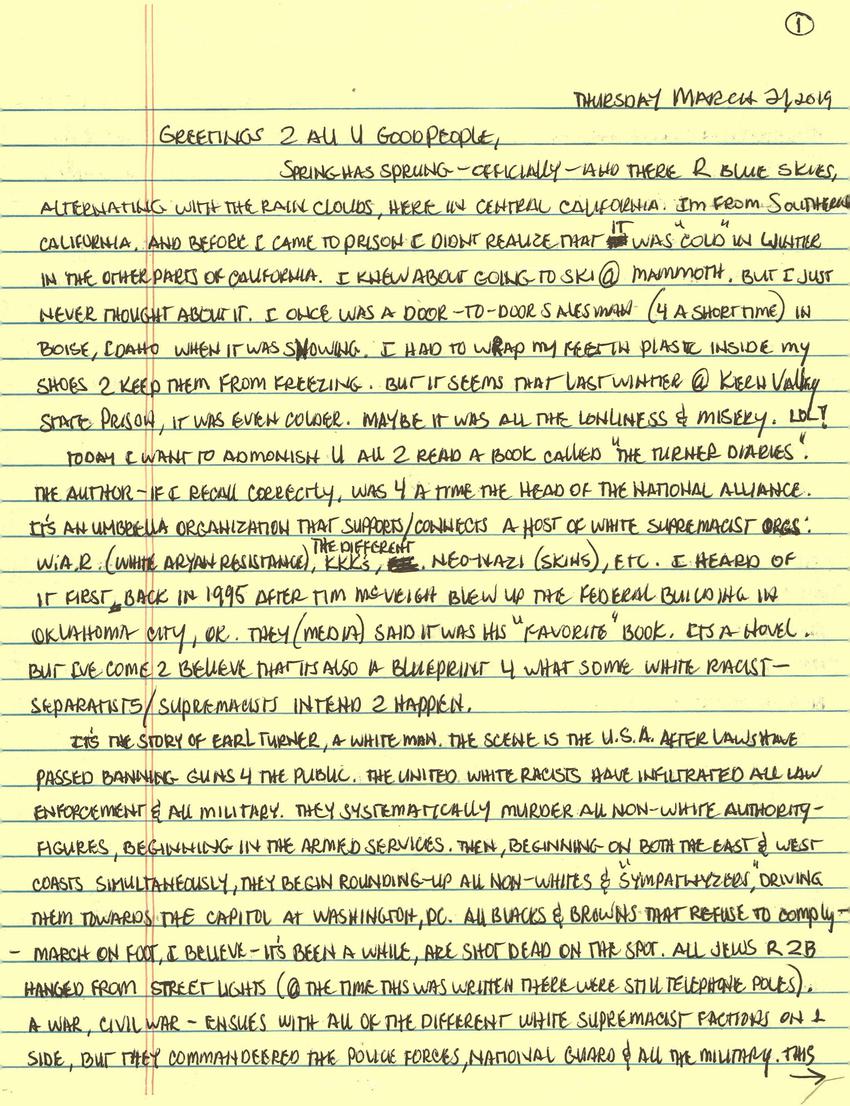 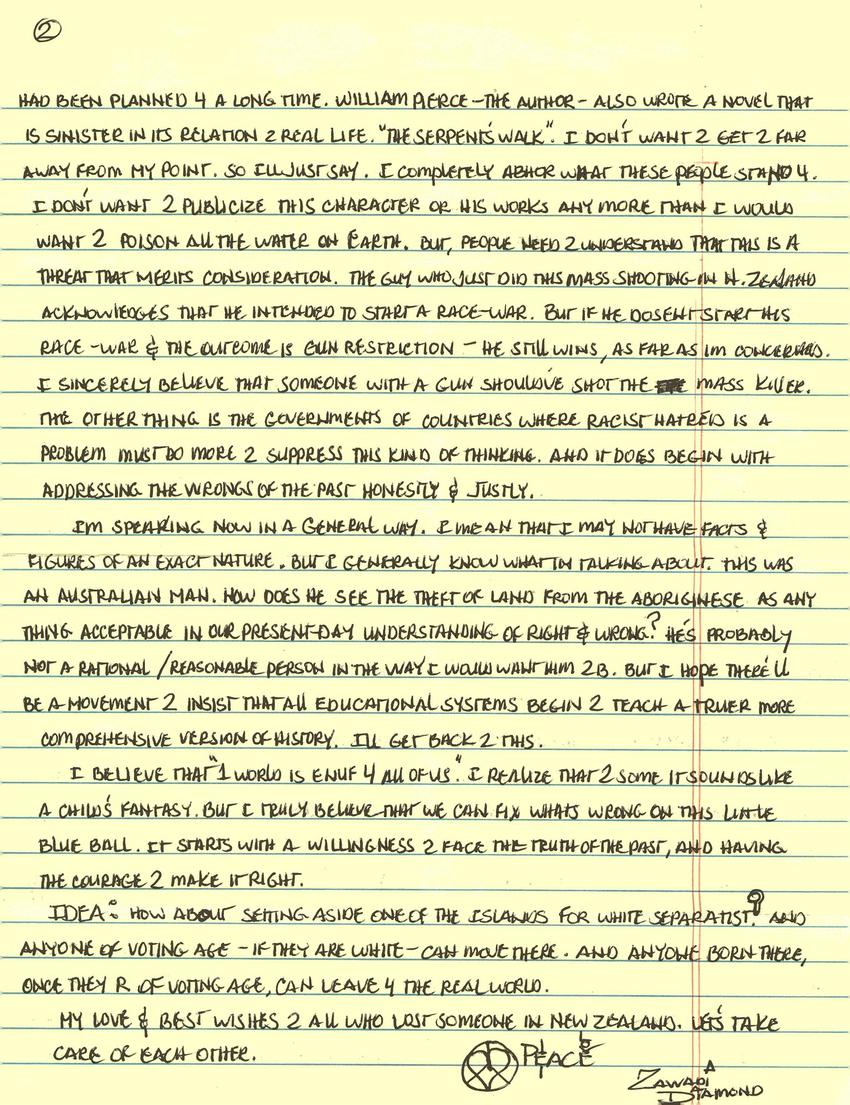 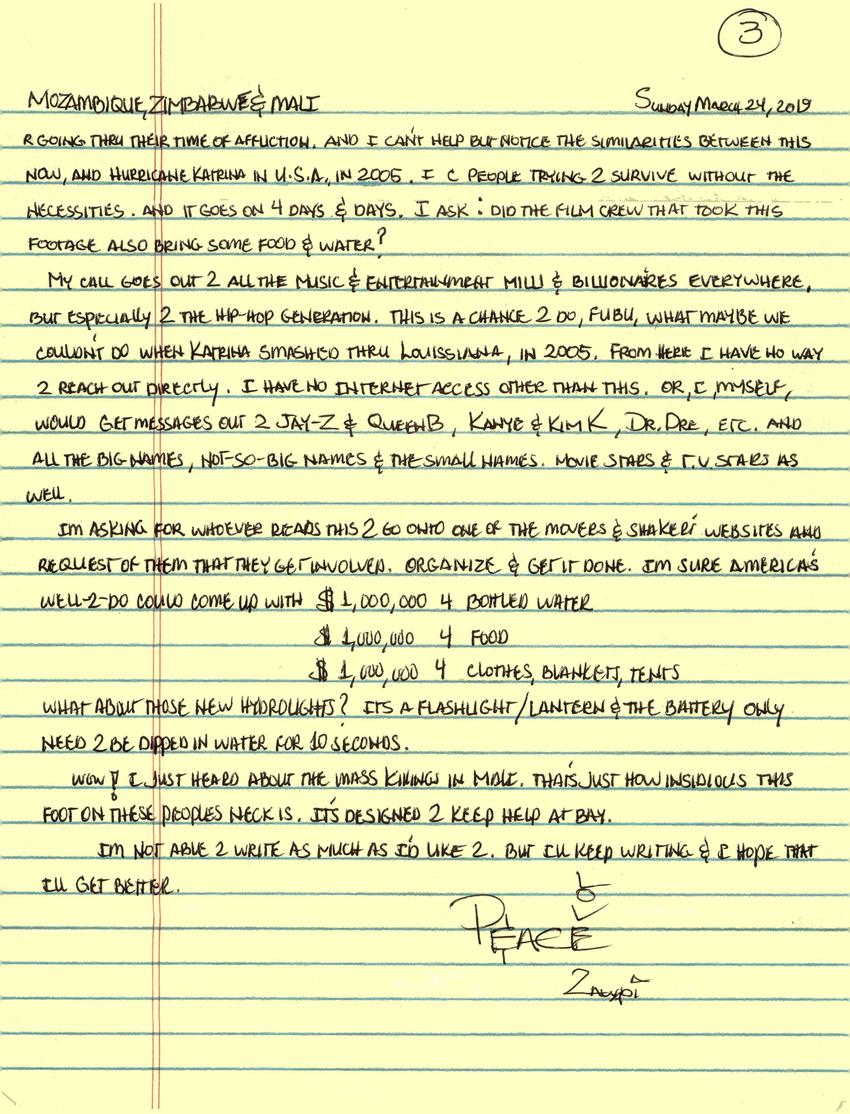 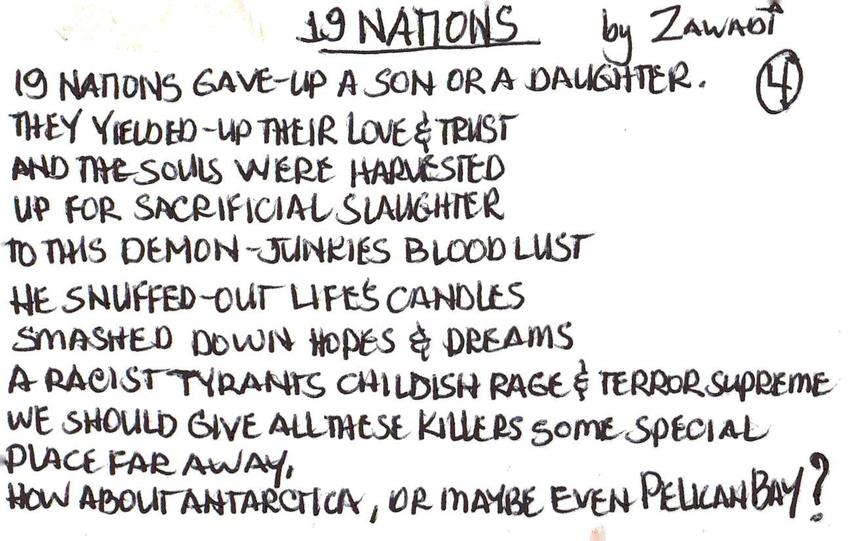 Greetings 2 all u good people,

Spring has sprung - officially - and there r blue skies, alternating with the rain clouds, here in Central California. I'm from Southern California. And before I came to prison I didn't realize that it was COLD in winter in the other parts of California. I knew about going to ski @ Mammoth, but I just never thought about it. I once was a door-to-door salesman (4 a short time) in Boise, Idaho when it was snowing. I had to wrap my feet in plastic inside my shoes 2 keep them from freezing. But it seems that last winter @ Kern Valley State Prison, it was even colder. Maybe it was all the lonliness & misery. LOL!

Today I want to admonish u all 2 read a book called "The Turner Diaries". The author - if I recall correctly, was 4 a time the head of the National Alliance. It's an umbrella organization that supports/connects a host of white supremacist orgs: WAR (White Aryan Resistance), the different KKKs, neo-Nazi (skins), etc. I heard of it first back in 1995 after Tim McVeigh blew up the federal building in Oklahoma City, OK. They (media) said it was his FAVORITE book. It's a novel. But I've come 2 believe that it's also a blueprint 4 what some white racist separatists/supremacists intend 2 happen.

It's the story of Earl Turner, a white man. The scene is the USA after laws have passed banning guns 4 the public. The united white racists have infiltrated all law enforcement & all military. They systematically murder all non-white authority-figures, beginning in the armed services. Then, beginning on both the east & west coasts simultaneously, they begin rounding-up all non-whites & "sympathyzers", driving them towards the Capitol at Washington, DC. All blacks & browns that refuse to comply - march on foot, I believe - it's been a while, are shot dead on the spot. All Jews r 2 b hanged from street lights (@ the time this was written there were still telephone poles_. A war, civil war - ensues with all of the different white supremacist factions on 1 side, but they commandeered the police forces, National Guard & all the military. This had been planned 4 a long time. William Pierce - the author - also wrote a novel that is sinister in its relation 2 real life. "The Serpent's Walk". I don't want 2 get 2 far away from my point. So I'll just say. I completely abhor what these people stand 4. I don't want 2 publicize this character or his works any more than I would want 2 poison all the water on Earth. But, people need 2 understand that this is a threat that merits consideration. The guy who just did this mass shooting in N. Zealand acknowledges that he intended to start a race-war. But if he doesn't start his race-war & the outcome is gun restriction - he still wins, as far as I'm concerned. I sincerely believe that someone with a gun should've shot the mass killer. The other thing is the governments of countries where racist hatred is a problem must do more 2 suppress this kind of thinking. And it does begin with addressing the wrongs of the past honestly & justly.

I'm speaking now in a general way. I mean that I may not have facts & figures of an exact nature. But I generally know what I'm talking about. This was an Australian man. How does he see the theft of land from the Aboriginese as any thing acceptable in our present-day understanding of right & wrong? He's probably not a rational/reasonable person in the way I would want him 2 b. But I hope there'll be a movement 2 insist that all educational systems begin 2 teach a truer more comprehensive version of history. I'll get back 2 this.

I believe that "1 world is enuf 4 all of us". I realize that 2 some it sounds like a child's fantasy. But I truly believe that we can fix what's wrong on this little blue ball. It starts with a willingness 2 face the truth of the past, and having the courage 2 make it right.

Idea: How about setting aside one of the islands for white separatist? And anyone of voting age - if they are white - can move there. And anyone born there, once they r of voting age, can leave 4 the real world.

My love & best wishes 2 all who lost someone in New Zealand. Let's take care of each other.

Mozambique, Zimbabwe & Mali r going thru their time of affliction. And I can't help but notice the similarities between this now, and Hurricane Katrina in USA, in 2005. I c people trying 2 survive without the necessities. And it goes on 4 days & days. I ask: did the film crew that took this footage also bring some food & water?

My call goes out 2 all the music & entertainment milli & billionaires everywhere, but especially 2 the hip-hop generation. This is a chance 2 do, FUBU, what maybe we couldn't do when Katrina smashed through Louissiana, in 2005. From here I have no way 2 reach out directly. I have no internet access other than this. Or, I, myself, would get messages out 2 Jay-Z & Queen B, Kanye & Kim K, Dr Dre, etc, and all the big names, not-so-big names & the small names. Movie stars & TV stars as well.

What about those new hydrolights? It's a flashlight/lantern & the battery only need 2 be dipped in water for 10 seconds.

Wow! I just heard about the mass killings in Mali. That's just how insidious this foot on these people's neck is. It's designed 2 keep help at bay.

19 nations gave-up a son or a daughter.
They yielded-up their love & trust
And the souls were harvested
Up for sacrificial slaughter
To this demon-junkie's blood lust
He snuffed-out life's candles
Smashed down hopes & dreams
A racist tyrant's childish rage & terror supreme
We should give all these killers some special place far away,
How about Antarctica, or maybe even Pelican Bay?