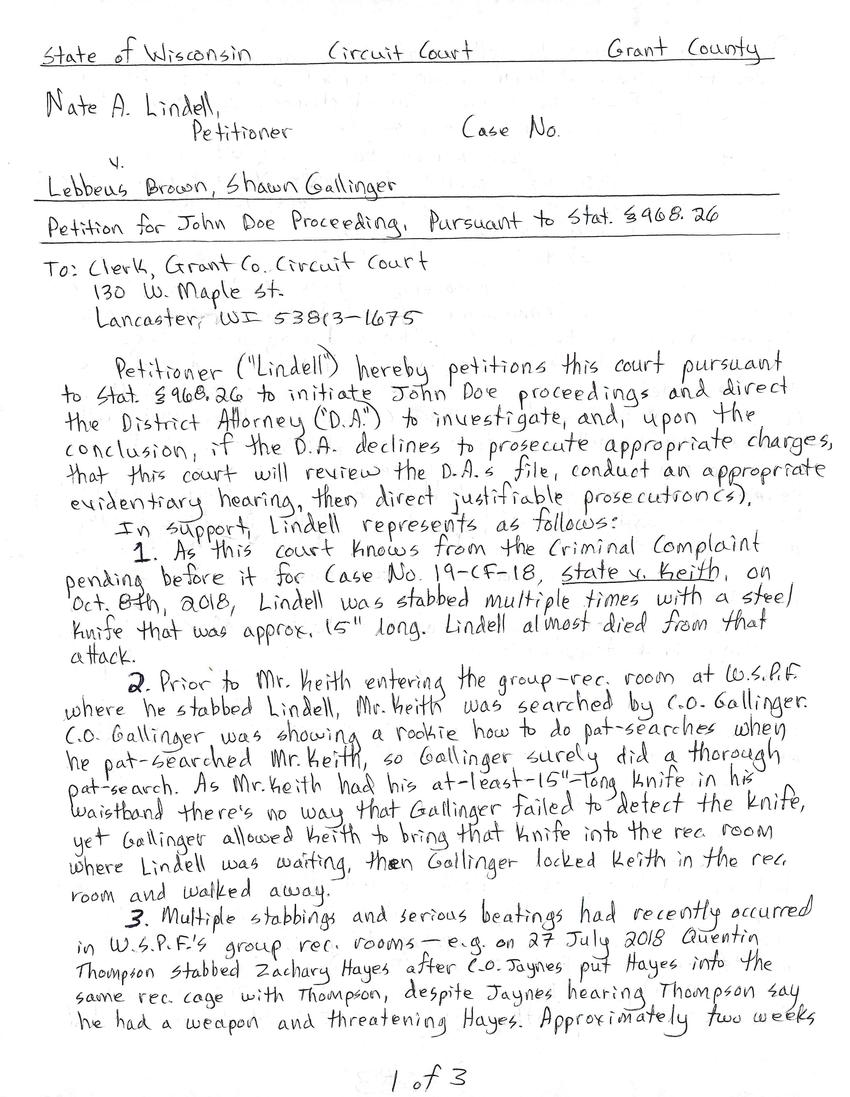 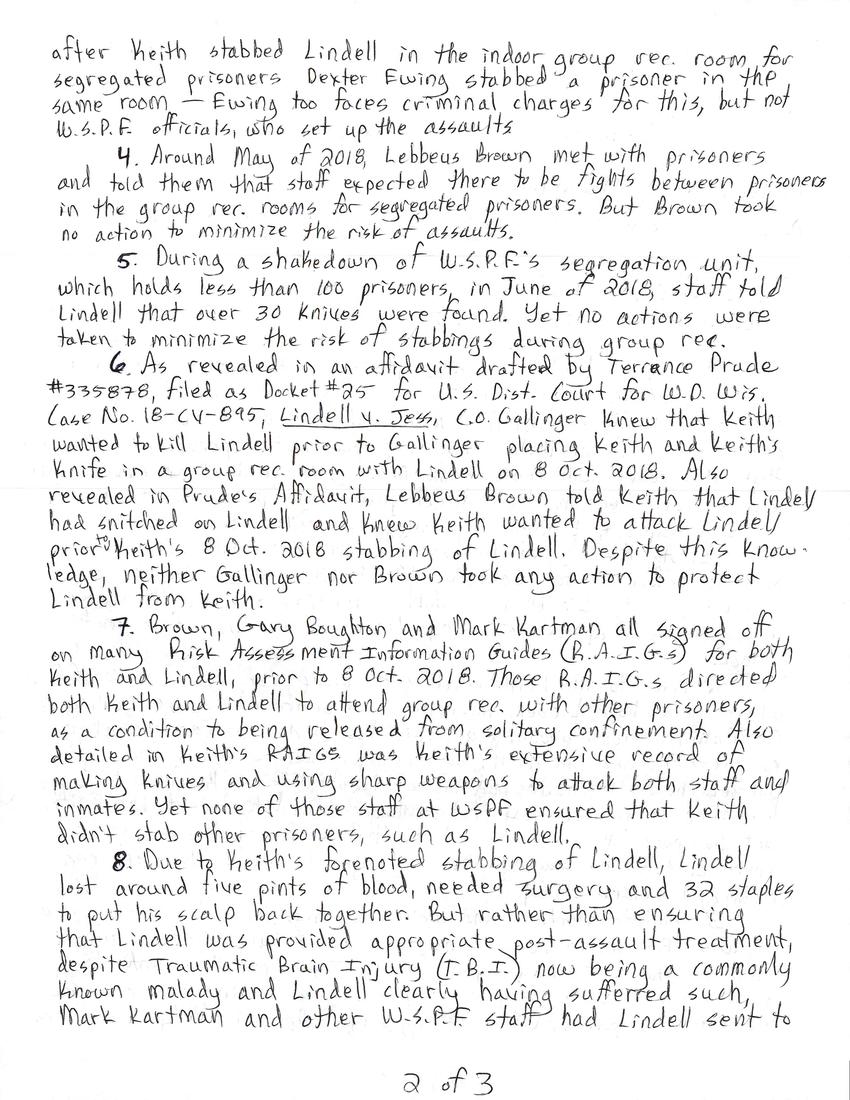 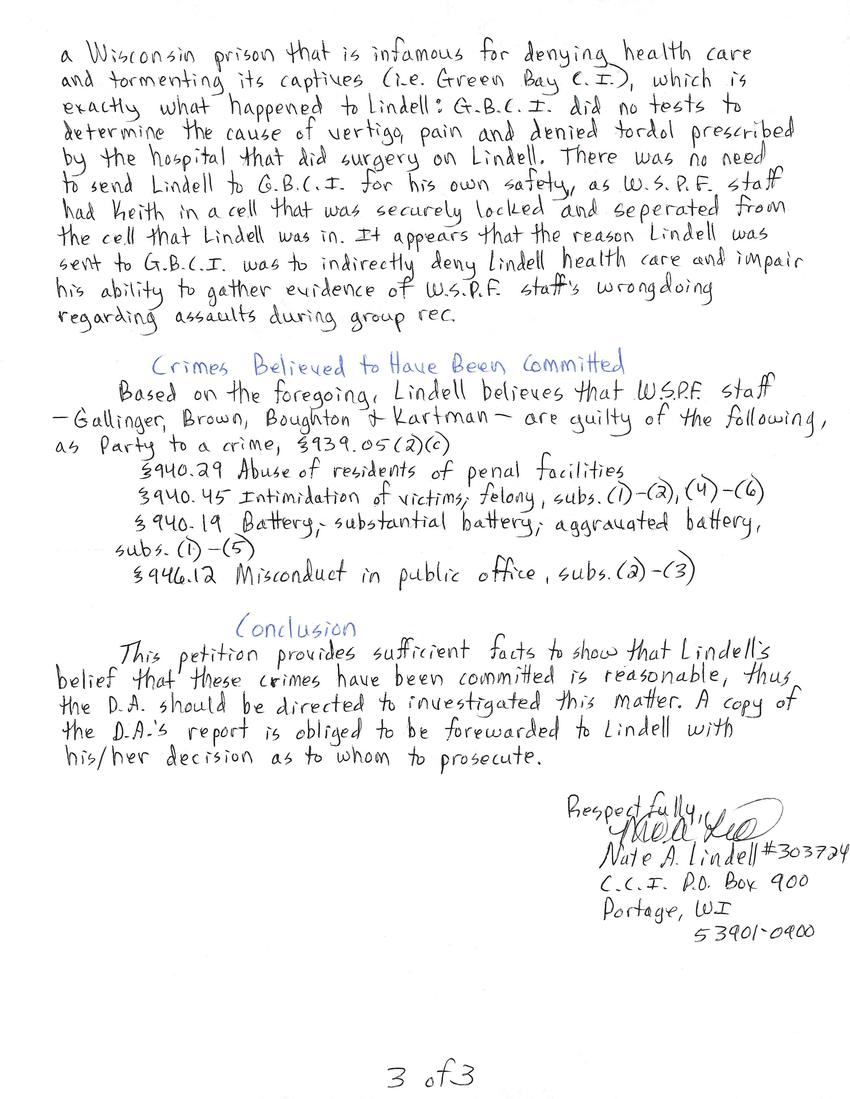 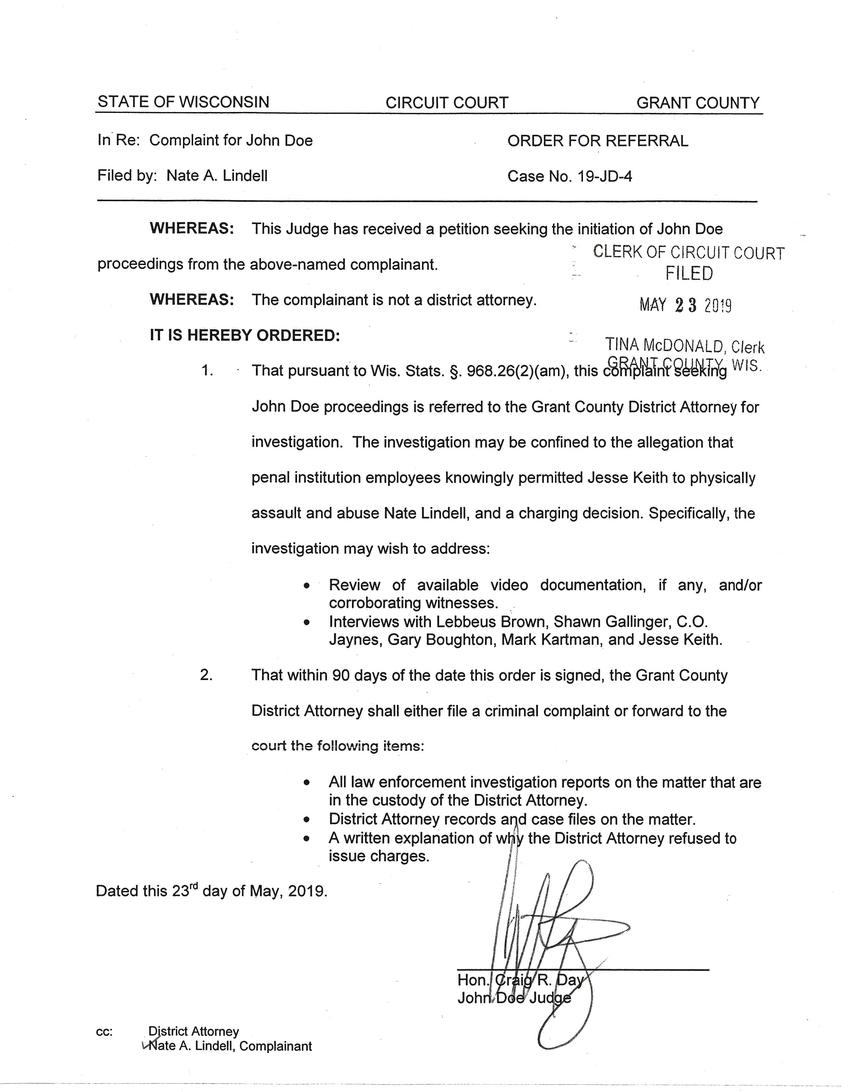 Attached you'll see my 3-pg John Doe Petition and Judge Day's May 23rd Order approving it - Case No. 19-JD-4, Grant County Circuit Court - and directing the D.A. to investigate the Administration of W.S.P.F. for setting myself and other prisoners up to be stabbed.
Please share this material on social media and with the press.
Leave a comment, so I get the reply I.D. for this post and can post the results with notification going to interested viewers.
-end-

Petitioner ("Lindell") hereby petitions this court pursuant to stat. 968.26 to initiate John Doe proceedings and direct the District Attorney ("D.A.") to investigate, and, upon the conclusion, if the D.A. declines to prosecute appropriate charges, that this court will review the D.A.'s file, conduct an appropriate evidentiary hearing, then direct justifiable prosecution(s).
In support, Lindell represents as follows:
1. As this court knows from the Criminal Complaint pending before it for Case No. 19-CF-18, State v. Keith, on Oct. 8th, 2018, Lindell was stabbed multiple times with a steel knife that was approx. 15" long. Lindell almost died from that attack.
2. Prior to Mr. Keith entering the group rec. room at W.S.P.F. where he stabbed Lindell, Mr. Keith was searched by C.O. Gallinger. C.O. Gallinger was showing a rookie how to do pat-searches when he pat-searched Mr. Keith, so Gallinger surely did a thorough pat-search. As Mr. Keith had his at-least-15"-long knife in his waistband, there's no way that Gallinger failed to detect the knife; yet, Gallinger allowed Keith to bring that knife into the rec. room where Lindell was waiting, then Gallinger locked Keith in the rec. room and walked away.
3. Multiple stabbings and serious beatings had recently occurred in W.S.P.F.'s group rec. rooms - e.g. on 27 July 2018 Quentin Thompson stabbed Zachary Hayes after C.O. Jaynes put Hayes into the same rec. cage with Thompson, despite Jaynes hearing Thompson say he had a weapon and threatening Hayes. Approximately two weeks after Keith stabbed Lindell in the indoor group rec. room for segregated prisoners, Dexter Ewing stabbed a prisoner in the same room - Ewing too faces criminal charges for this, but not W.S.P.F. officials, who set up the assaults.
4. Around May 2018, Lebbeus Brown met with prisoners and told them that staff expected there to be fights between prisoners in the group rec. rooms for segregated prisoners. But Brown took no action to minimize the risk of assaults.
5. During a shakedown of W.S.P.F.'s segregation unit, which holds less than 100 prisoners, in June of 2018, staff told Lindell that over 30 knives were found. Yet no actions were taken to minimize the risk of stabbings during group rec.
6. As revealed in an affidavit drafted by Terrance Prude #335878, filed as Docket #25 for U.S. Dist. Court for W.D. Wis. Case No. 18-CV-895, Lindell v. Jess, C.O. Gallinger knew that Keith wanted to kill Lindell prior to Gallinger placing Keith and Keith's knife in a group rec. room with Lindell on 8 Oct. 2018. Also revealed in Prude's affidavit, Lebbeus Brown told Keith that Lindell had snitched on Lindell and knew Keith wanted to attack Lindell prior to Keith's 8 Oct. 2018 stabbing of Lindell. Despite this knowledge, neither Gallinger nor Brown took any action to protect Lindell from Keith.
7. Brown, Gary Boughton and Mark Kartman all signed off on many Risk Assessment Information Guides (R.A.I.G.s) for both Keith and Lindell, prior to 8 Oct. 2018. Those R.A.I.G.s directed both Keith and Lindell to attend group rec. with other prisoners, as a condition to being released from solitary confinement. Also detailed in Keith's RAIGs was Keith's extensive record of making knives and using sharp weapons to attack both staff and inmates. Yet non of those staff at W.S.P.F. ensured that Keith didn't stab other prisoners, such as Lindell.
8. Due to Keith's forenoted stabbing of Lindell, Lindell lost around five pints of blood, needed surgery and 32 staples to put his scalp back together. But rather than ensuring that Lindell was provided appropriate post-assault treatment, despite Traumatic Brain Injury (T.B.I.) now being a commonly known malady and Lindell clearly having suffered such, Mark Kartman and other W.A.P.F. staff had Lindell sent to a Wisconsin prison that is infamous for denying health care and tormenting its captives (e.g. Green Bay C.I.), which is exactly what happened to Lindell. There was no need to send Lindell to G.B.C.I. for his own safety, as W.S.P.F. staff had Keith in a cell that was securely locked and separated from the cell that Lindell was in. It appears that the reason Lindell was sent to G.B.C.I. was to indirectly deny Lindell health care and impair his ability to gather evidence of W.S.P.F. staff's wrongdoing regarding assaults during group rec.

Conclusion
This petition provides sufficient facts to show that Lindell's belief that these crimes have been committed is reasonable, thus the D.A. should be directed to investigate this matter. A copy of the D.A.'s report is obliged to be forwarded to Lindell with his/her decision as to whom to prosecute.
Respectfully,
[signature]
Nate A. Lindell #303724
C.C.I. P.O. Box 900
Portage, WI
53901-0900

In Re: Complaint for John Doe ORDER FOR REFERRAL

WHEREAS: This judge has received a petition seeking the initiation of John Doe proceedings from the above-named complainant.
[STAMP: CLERK OF CIRCUIT COURT FILED
MAY 23 2019 TINA MCDONALD, Clerk GRANT COUNTRY WIS.]

WHEREAS: The complainant is not a district attorney.

IT IS HEREBY ORDERED:

1. That pursuant to Wis. Stats. 968.26(2)(am), this complaint seeking John Doe proceedings is referred to the Grant County District Attorney for investigation. The investigation may be confined to the allegation that penal institution employees knowingly permitted Jesse Keith to physically assault and abuse Nate Lindell, and a charging decision. Specifically, the investigation may wish to address:
- Review of available documentation, if any, and/or corroborating witnesses.
- Interviews with Lebbeus Brown, Shawn Gallinger, C.O. Jaynes, Gary Boughton, Mark Kartman, and Jesse Keith.
2. That within 90 days of the date this order is signed, the Grant County District Attorney shall either file a criminal complaint or forward to the court the following items:
- All law enforcement investigation reports on the matter that are in the custody of the District Attorney.
- District Attorney records and case files on the matter.
- A written explanation of why the District Attorney refused to issue charges.
Dated this 23rd day of May, 2019.