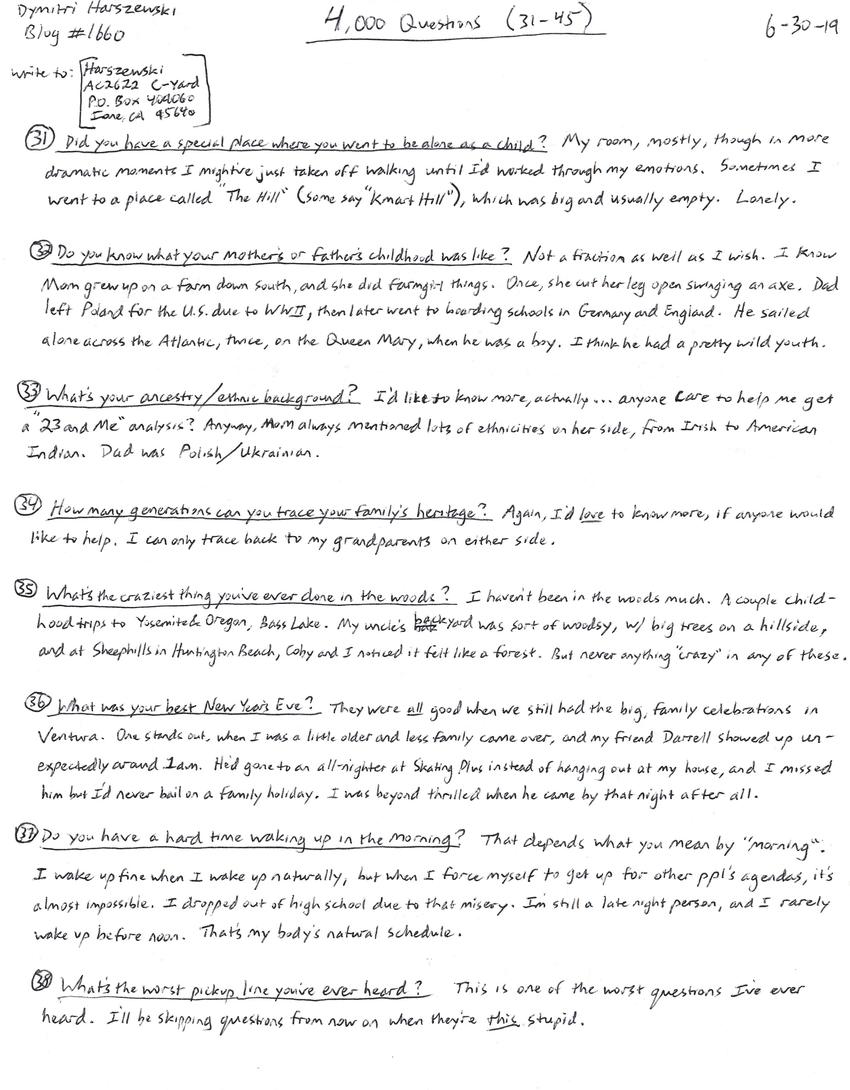 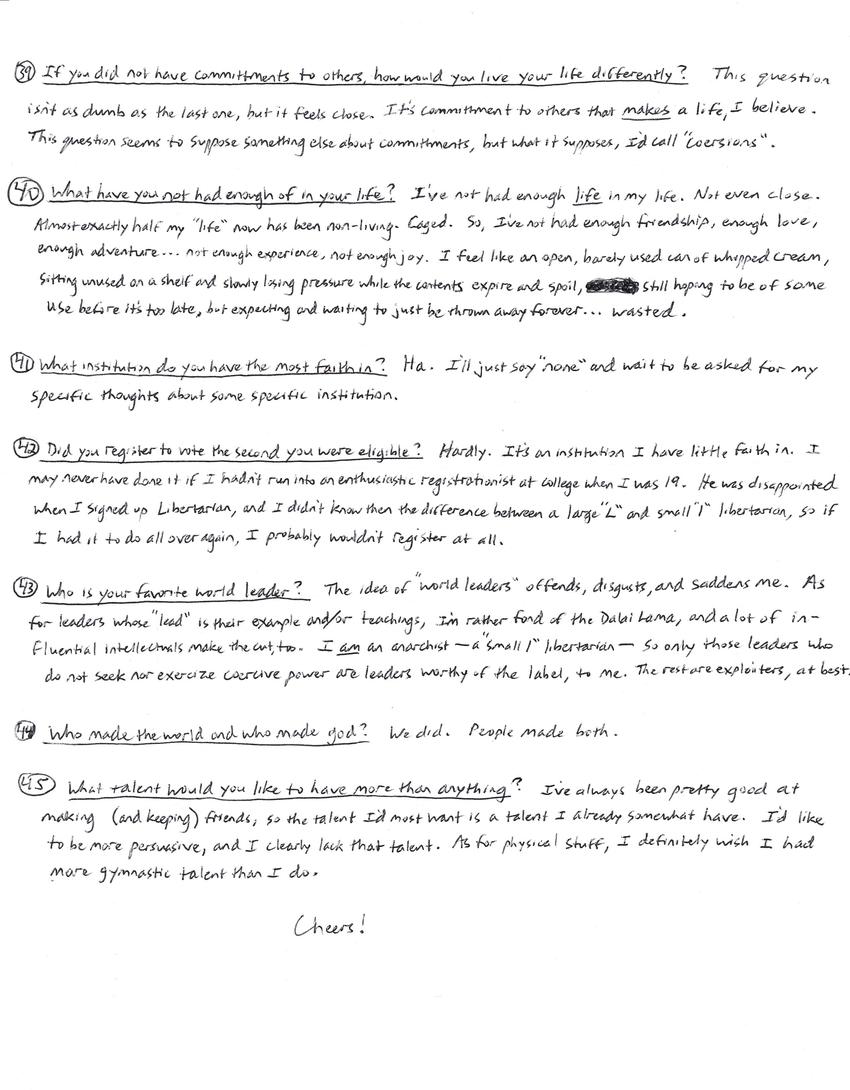 31. Did you have a special place where you went to be alone as a child?
My room, mostly. Though in more dramatic moments, I might've just taken off walking until I'd worked through my emotions. Sometimes, I went to a place called The Hill (some say "Kmart Hill"), which was big and usually empty. Lonely.

32. Do you know what your mother's or father's childhood was like?
Not a fraction as well as I wish. I know Mom grew up on a farm down south, and she did farm girl things. Once, she cut her leg open swinging an ax. Dad left Poland for the U.S. due to WWII, then later went to boarding schools in Germany and England. He sailed alone across the Atlantic, twice, on the Queen Mary when he was a boy. I think he had a pretty wild youth.

33. What's your ancestry/ethnic background?
I'd like to know more, actually... Anyone care to help me get a 23 and Me analysis? Anyway, Mom always mentioned lots of ethnicities on her side, from Irish to American Indian. Dad was Polish/Ukrainian.

34. How many generations can you trace your family's history?
Again, I'd love to know more, if anyone would like to help. I can only trace back to my grandparents on either side.

35. What's the craziest thing you've ever done in the woods?
I haven't been in the woods much. A couple childhood trips to Yosemite, Oregon, Bass Lake. My uncle's backyard was sort of woodsy, with big trees on a hillside, and at Sheephills in Huntington Beach, Coby, and I noticed it felt like a forest. But never anything "crazy" in any of these.

36. What was your best New Year's Eve?
They were all good when we still had the big family celebrations in Ventura. One stands out. When I was a little older and less family came over, and my friend Darrell showed up unexpectedly around 1 a.m. He'd gone to an all-nighter at Skating Plus instead of hanging out at my house, and I missed him, but I'd never bail on a family holiday. I was beyond thrilled when he came by that night after all.

37. Do you have a hard time waking up in the morning?
That depends on what you mean by "morning." I wake up fine when I wake up naturally. But when I force myself to get up for other people's agendas, it's almost impossible. I dropped out of high school due to that misery. I'm still a late night person, and I rarely wake up before noon. That's my body's natural schedule.

39. If you did not have commitments to others, how would you live your life differently?
This question isn't as dumb as the last one, but it feels close. It's commitment to others that makes a life, I believe. This question seems to suppose something else about commitments, but what it supposes—I'd call "coersions."

40. What have you not had enough of in your life?
I've not had enough life in my life. Not even close. Almost exactly half of my "life" now has been non-living. Caged. So, I've not had enough friendship, enough love, enough adventure. Not enough experience, not enough joy. I feel like an open barely used can of whipped cream sitting unused on a shelf and slowly losing pressure while the contents expire and spoil, still hoping to be of some use before it's too late. But expecting and waiting to just be thrown away forever... wasted.

41. What institution do you have the most faith in?
Ha. I'll just say none and wait to be asked for my specific thoughts about some specific institution.

42. Did you register to vote the second you were eligible?
Hardly. It's an institution I have little faith in. I may never have done it if I hadn't run into an enthusiastic registrationist at college when I was 19. He was disappointed when I signed up Libertarian, and I didn't know the difference between a large "L" and small "l" libertarian. So if I had to do it all over again, I probably wouldn't register at all.

43. Who is your favorite world leader?
The idea of world leaders offends, disgusts, and saddens me. As for leaders whose "lead" in their example and/or teachings, I'm rather fond of the Dalai Lama. A lot of other influential intellectuals make the cut, too. I am an anarchist—a small "l" libertarian—so only those leaders who do not seek nor exercise coercive power are leaders worthy of the label to me. The rest are exploiters, at best.

44. Who made the world and who made God?
We did. People made both.

45. What talent would you like to have more than anything?
I've always been pretty good at making (and keeping) friends, so the talent I'd most want is a talent I already somewhat have. I'd like to be more positive, and I clearly lack that talent. As for physical stuff, I definitely wish I had more gymnastic talent than I do.