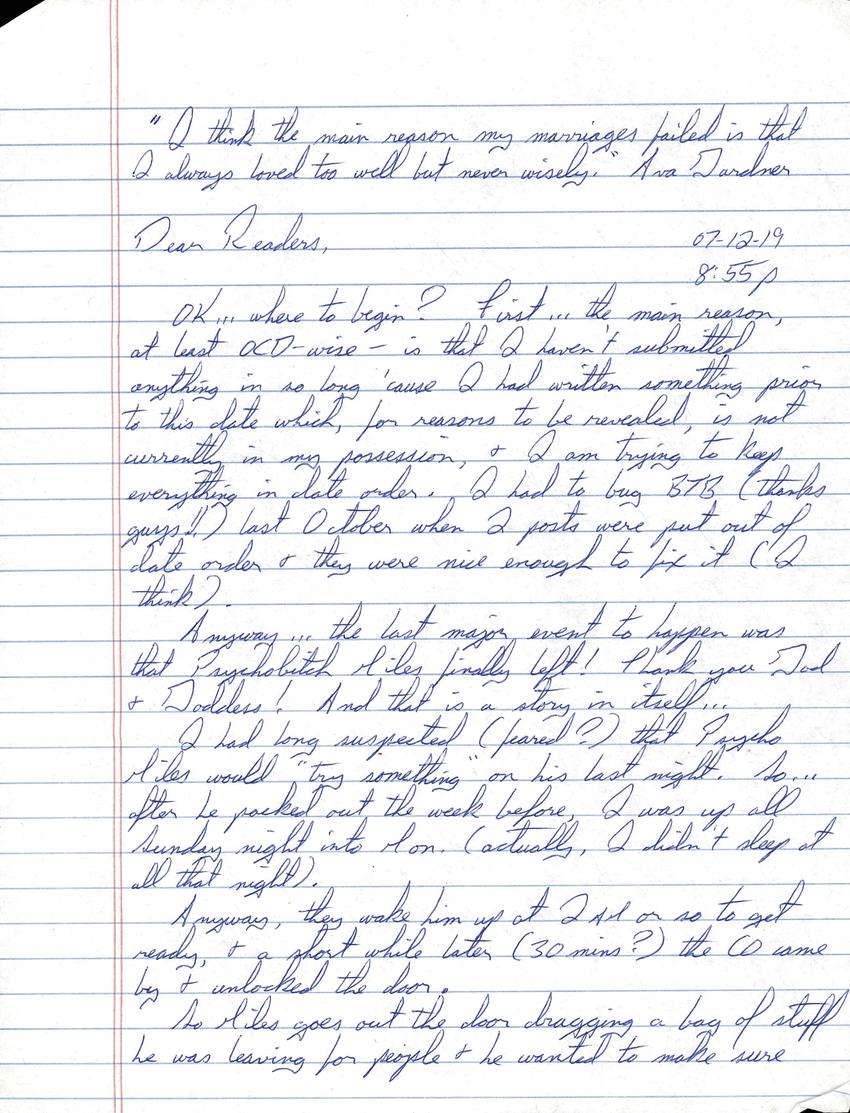 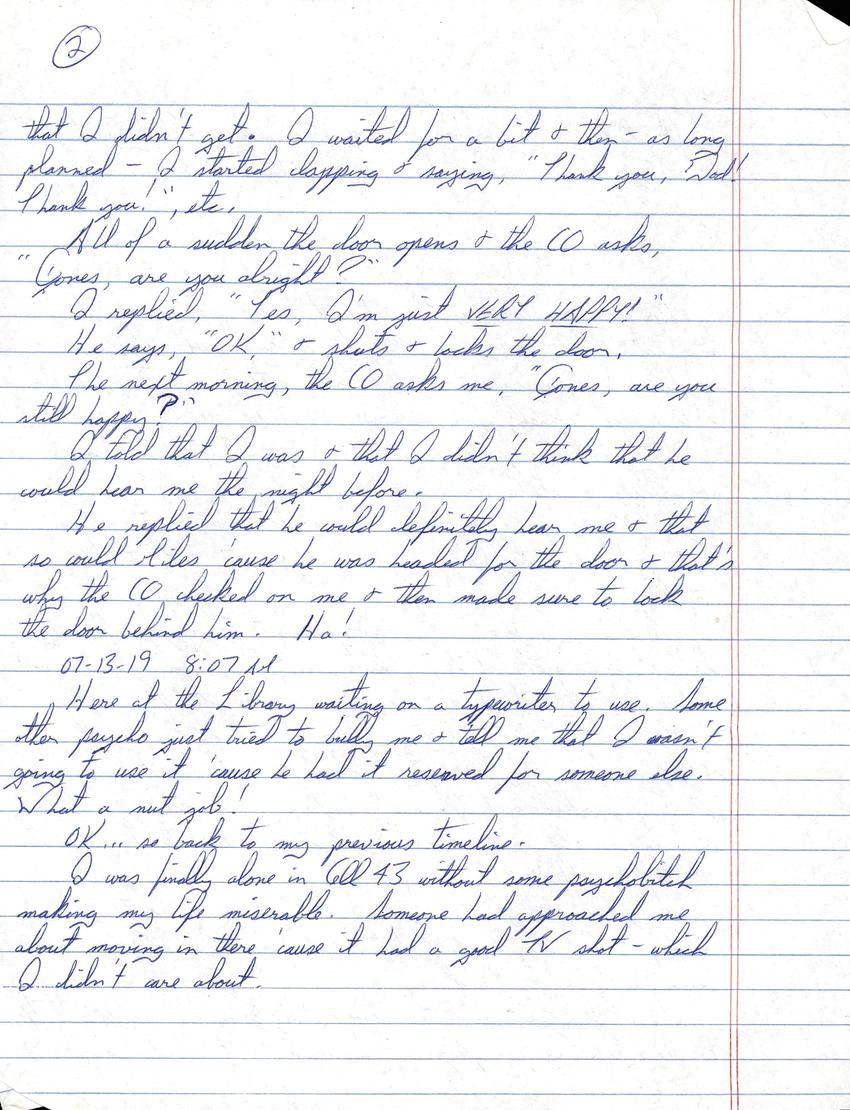 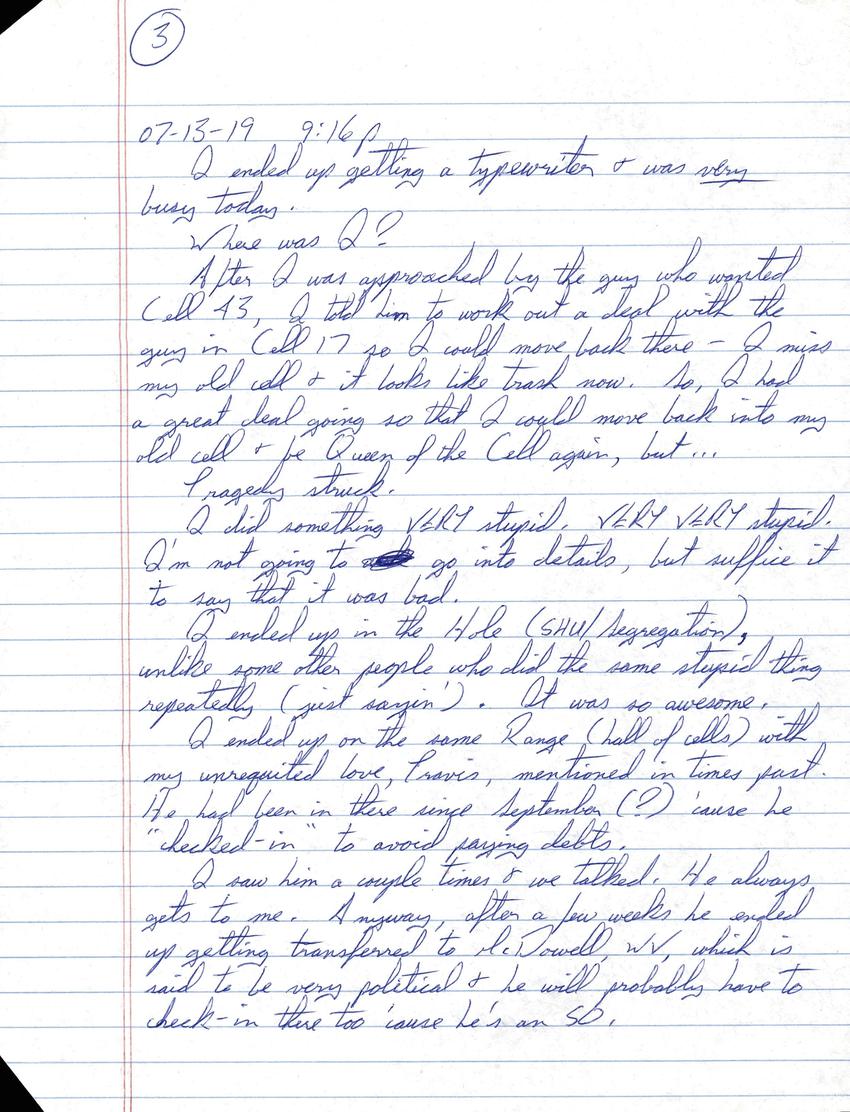 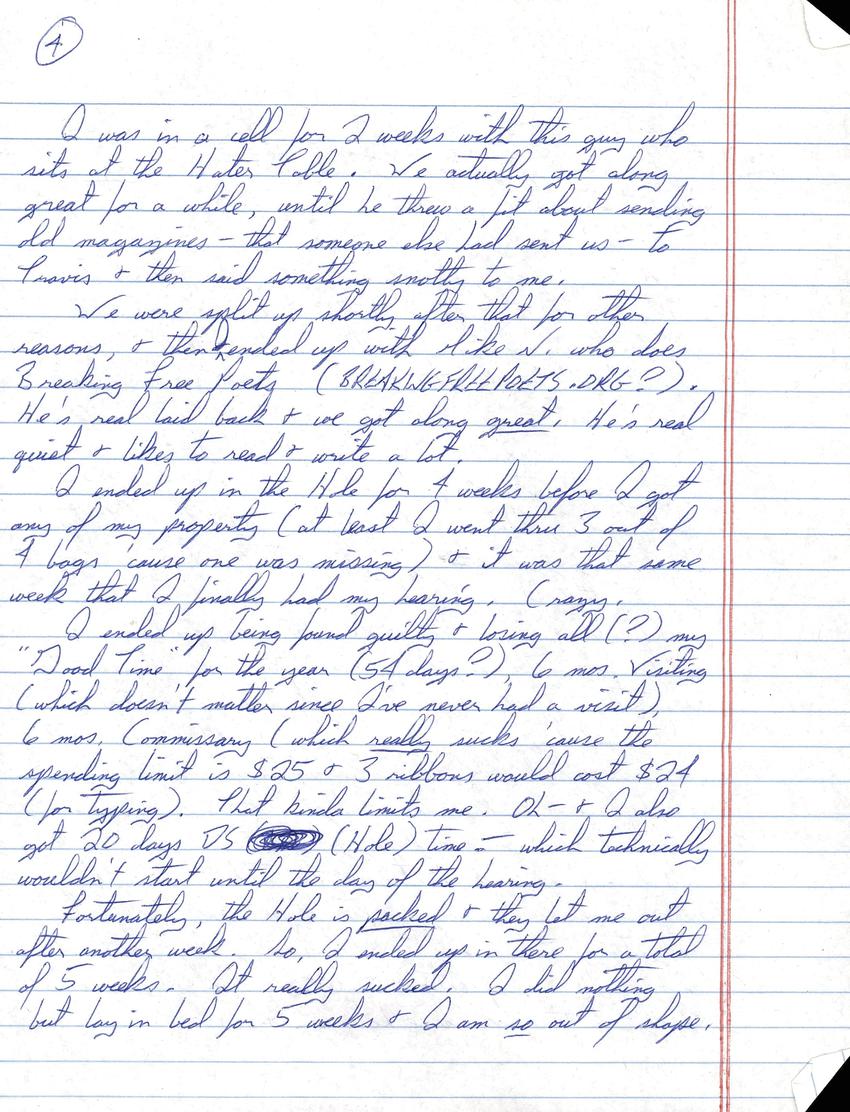 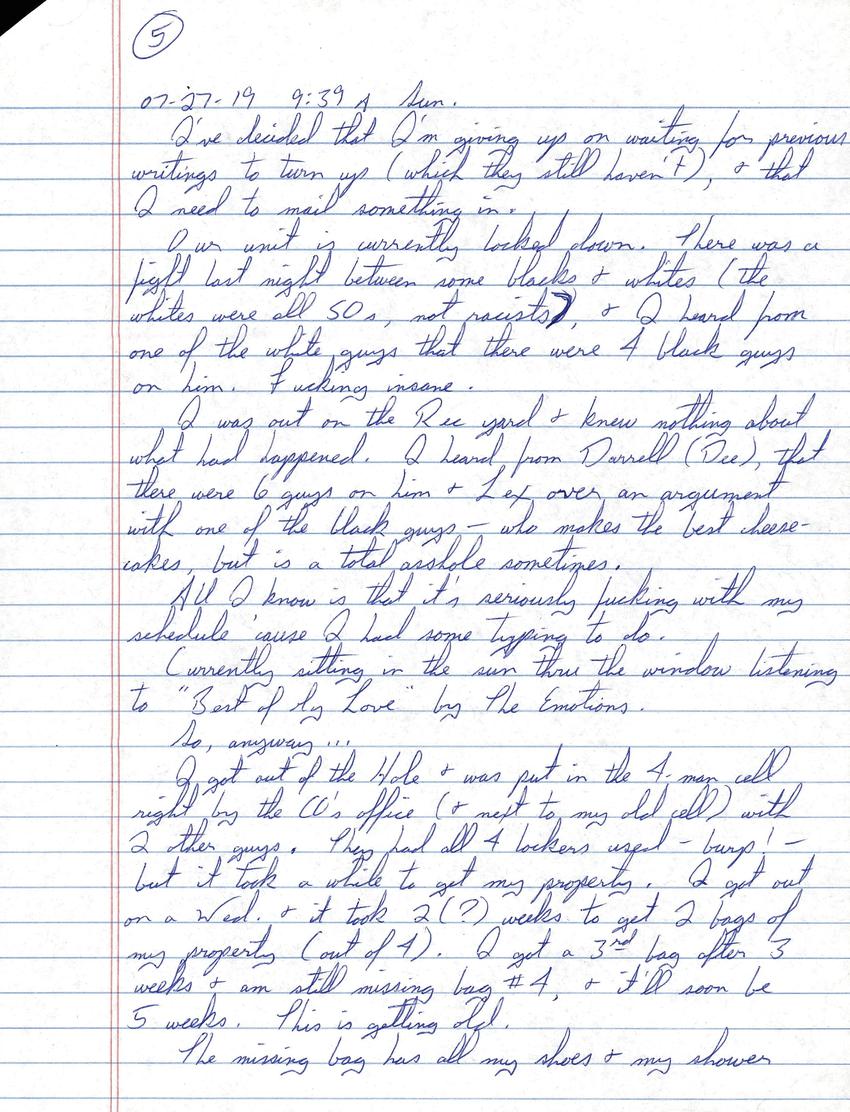 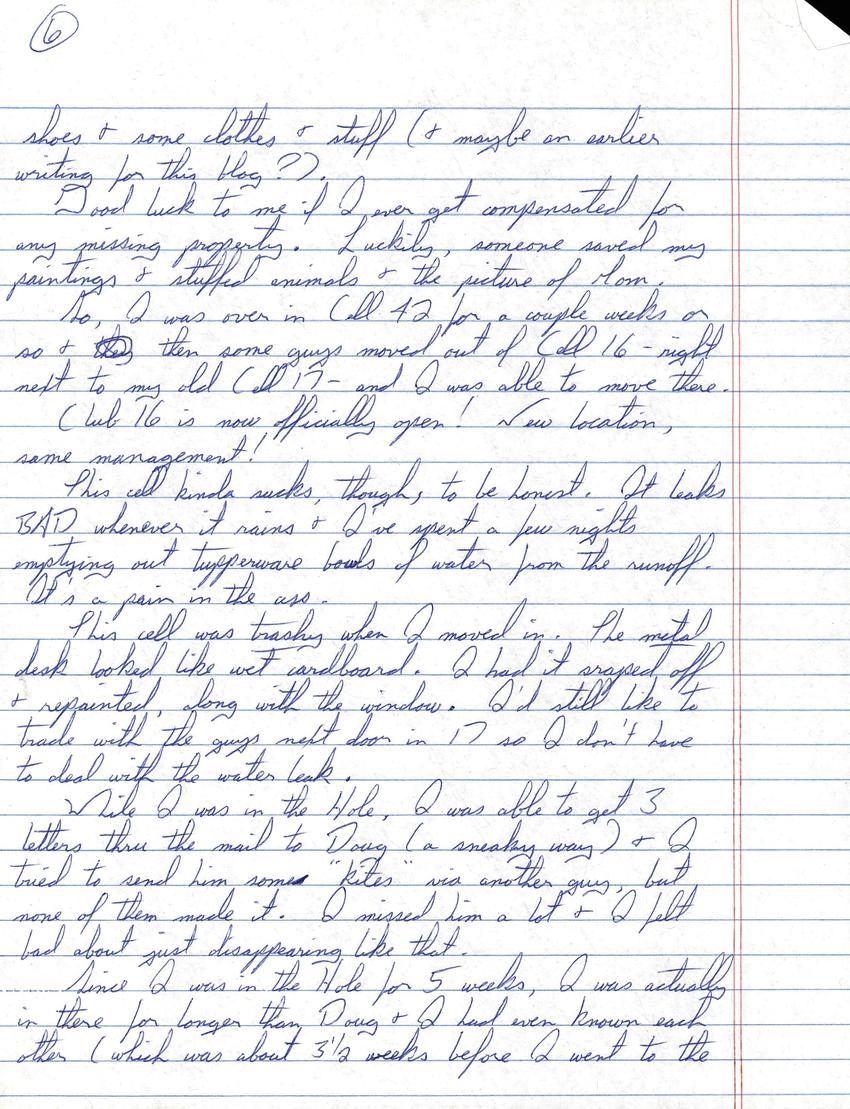 "I think the main reason my marriages failed in that I always loved too well but never wisely."
—Ava Gardner

OK... where to begin? First, the main reason at least OCD-wise is that I haven't submitted anything in so long 'cause I had written something prior to this date which, for reasons to be revealed, is not currently in my possession. And I am trying to keep everything in date order. I had to bug BTB (thanks, guys!) last October when two posts were put out of date order, and they were nice enough to fix it (I think).

Anyway... the last major event to happen was that Psychobitch Miles finally left! Thank you God and Goddess! And that is a story in itself...

I had long suspected (feared?) that Psycho Miles would "try something" on his last night. So... after he packed out the week before, I was up all Sunday night into Monday (actually, I didn't sleep at all that night). Anyway, they wake him up at 2 AM or so to get ready, and short while later (30 minutes?) the CO came by and unlocked the door. So, Miles goes out the door dragging a bag of staff he was leaving for people, and he wanted to make sure that I didn't get. I waited for a bit and then—as long planned—I started clapping and saying, "Thank you, God! Thank you!", etc.

All of a sudden, the door opens and The CO asks, "Jones, are you alright?"
I replied, "Yes, I'm just VERY HAPPY!"
He says, "Okay," and shuts and locks the door.
The next morning the CO asks me, "Jones, are you still happy?"
I told him that I was, and that I didn't think he could hear me the night before.
He replied that he could definitely hear me and that so could Miles 'cause he was headed for the door. That's why the CO checked on me and then made sure to lock door behind him. Ha!

Here at the library waiting on a typewriter to use. Some other psycho just tried to bully me and tell me that I wasn't going to use it 'cause he had it reserved for someone else. What a nut job!

Okay... so back to my previous timeline.

I was finally alone in Cell 43 without some psychobitch making my life miserable. Someone had approached me about moving in there 'cause it had a good TV slot—which I didn't care about.

I ended up getting a typewriter and was very busy today.

After I was approached by the guy who wanted Cell 43, I told him to work out a deal with the guy in Cell 17 so I could move back there—I miss my old cell and it looks like trash now. So, I had a great deal going so that I would move back into my old cell and be Queen of the Cell again, but...

I did something VERY stupid. VERY VERY stupid. I'm not going to go into details, but suffice it to say that it was bad.

I ended up in the Hole (SHU/Segregation), unlike some other people who did the same stupid thing repeatedly (just sayin'). It was so awesome.

I ended up on the same range (hall of cells) with my unrequited love, Travis, mentioned in times past. He had been in there since September (?) 'cause he "checked in" to avoid paying debts.

I saw him a couple times and we talked. He always gets to me. Anyway, after a few weeks, he ended up getting transferred to McDowell, WV, which is said to be very political and he will probably have to check in there too 'cause he's an SO.

I was in a cell for two weeks with this guy who sits at the Hater Table. We actually got along great for a while, until he threw a fit about sending old magazines—that someone else had sent us—to Travis and then said something snotty to me.

We were split up shortly after that for other reason and then ended up with Mike N., who does Breaking Free Poets (breakingfreepoets.org(?)). He's real laid back, and we got along great. He's real quite, and likes to read and write a lot.

I ended up in the Hole for four weeks before I got any of my property (at least I went there three out of four bags 'cause one was missing), and it was that same week that I finally had my hearing. Crazy.

I ended up being found guilty and losing all (?) "good time" for the year (54 days?), six months visiting (which doesn't matter since I've never had a visit), six months commissary (which really sucks 'cause the spending limit is $25 and three ribbons for typing would cost $24). That kinda limits me. Oh, and I also got twenty days DS (hole) time—which technically wouldn't start until the day of the hearing.

Fortunately, the Hole is packed and they let me out after another week. So, I ended up in there for a total of five weeks. It really sucked. I did nothing but lay in there for five weeks, and I am so out of shape.

I've decided that I'm giving up on waiting for previous writings to turn up (which they still haven't), and that I need to mail something in.

Our unit is currently locked down. There was a fight last night between some blacks and whites. The whites were all SOs, not racists. And I heard from one of the white guys that there were four black guys on him. Fucking insane.

I was out on the rec yard and knew nothing about what had happened. I heard from Darrel (Dee) that there were six guys on him and Lex over an argument with one of the black guys—who makes the best cheesecakes but is a total asshole sometimes.

All I know is that it's seriously fucking with my schedule 'cause I had some typing to do.

Currently sitting in the sun through the window listening to "Best Of My Love" by The Emotions.

I got out of the Hole and was put in the four-man cell right by the CO's office (and next to my old cell) with two other guys. They had all four lockers used—burp!—but it took a while to get my property. I got out on a Wednesday and it took two(?) weeks to get two bags of my property (out of four). I got a third bag after three weeks, and I am still missing bag #4. It'll soon be five weeks. This is getting old.

The missing bag has all of my shoes, my shower shoes, some clothes, and stuff (and maybe an earlier writing for this blog?).

Good luck to me if I ever get compensated for any missing property. Luckily, someone saved my paintings and stuffed animals, and the picture of Mom.

So, I was over in Cell 42 for a couple weeks or so and then some guys moved out of Cell 16—right next to my old Cell 17—and I was able to move there.

This cell kinda sucks, though, to be honest. It leaks BAD whenever it rains and I've spent a few nights emptying out tupperware books of water from the runoff. It's a pain in the ass.

This cell was trashy when I moved in. The metal desk looked like wet cardboard. I had it scraped off and repainted, along with the window. I'd still like to trade with the guys next door in 17, so I don't have to deal with the water leak.

While I was in the Hole, I was able to get three letters through the mail to Doug (a sneaky way), and I tried to send him some "kites" via another guy, but none of them made it. I missed him a lot, and I felt bad about just disappearing like that.

Since I was in the Hole for five weeks, I was actually in there for longer than Doug and I had even known each other, which was about 3 1/2 weeks before I went to the hole. So... I was really apprehensive and nervous about seeing Doug, and he chewed me out in a very calm and rational way—which was more than I deserved. I apologized a thousand times, and we're still hanging out.

I think I may beat my three month curse with Doug. Technically, it's been three months today, but I don't count the five weeks I was gone. But Doug has been a really sweet and genuine guy who stuck by me for five weeks while I was in the Hole. He's repeatedly tried to make up with me after we had a fight a couple weeks ago. I think he's bonafide!

I've been busier than ever at work—which I was worried about 'cause the last time I went to the Hole I lost clients. So, thank goodness that didn't happen.