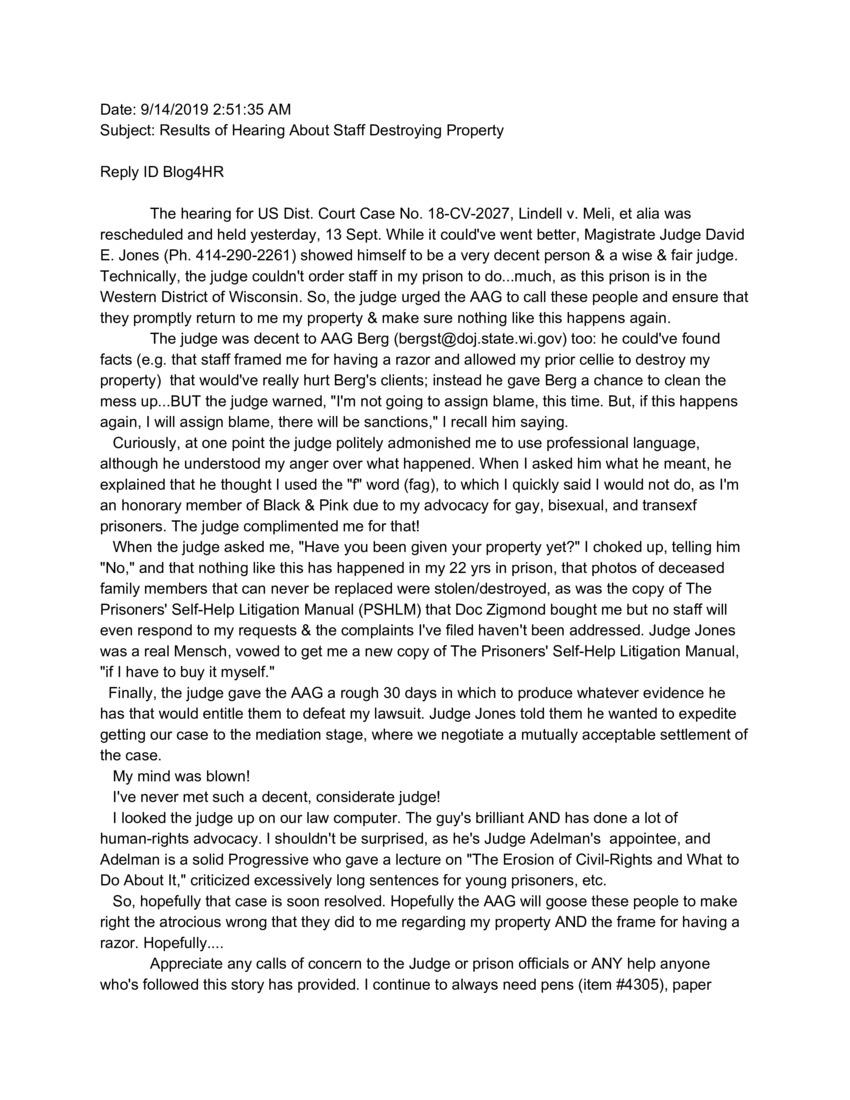 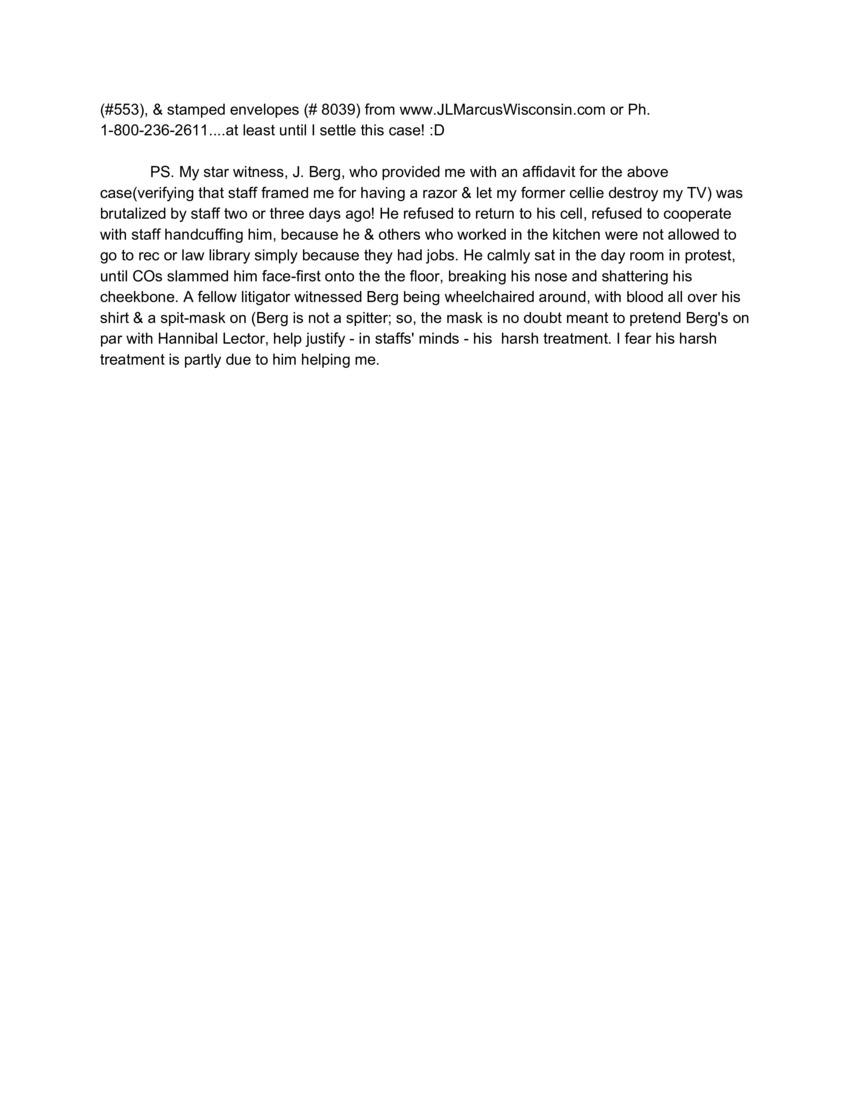 The hearing for US Dist. Court Case No. 18-CV-2027, Lindell v. Meli, et alia was rescheduled and held yesterday, 13 Sept. While it could've went better, Magistrate Judge David E. Jones (Ph. 414-290-2261) showed himself to be a very decent person & a wise & fair judge. Technically, the judge couldn't order staff in my prison to do...much, as this prison is in the Western District of Wisconsin. So, the judge urged the AAG to call these people and ensure that
they promptly return to me my property & make sure nothing like this happens again.
The judge was decent to AAG Berg (bergst@doj.state.wi.gov) too: he could've found facts (e.g. that staff framed me for having a razor and allowed my prior cellie to destroy my property) that would've really hurt Berg's clients; instead he gave Berg a chance to clean the mess up...BUT the judge warned, "I'm not going to assign blame, this time. But, if this happens again, I will assign blame, there will be sanctions," I recall him saying.
Curiously, at one point the judge politely admonished me to use professional language, although he understood my anger over what happened. When I asked him what he meant, he explained that he thought I used the "f" word (fag), to which I quickly said I would not do, as I'm an honorary member of Black & Pink due to my advocacy for gay, bisexual, and transexf prisoners. The judge complimented me for that!
When the judge asked me, "Have you been given your property yet?" I choked up, telling him "No," and that nothing like this has happened in my 22 yrs in prison, that photos of deceased family members that can never be replaced were stolen/destroyed, as was the copy of The Prisoners' Self-Help Litigation Manual (PSHLM) that Doc Zigmond bought me but no staff will even respond to my requests & the complaints I've filed haven't been addressed. Judge Jones was a real Mensch, vowed to get me a new copy of The Prisoners' Self-Help Litigation Manual, "if I have to buy it myself."
Finally, the judge gave the AAG a rough 30 days in which to produce whatever evidence he has that would entitle them to defeat my lawsuit. Judge Jones told them he wanted to expedite
getting our case to the mediation stage, where we negotiate a mutually acceptable settlement of the case.
My mind was blown! I've never met such a decent, considerate judge!
I looked the judge up on our law computer. The guy's brilliant AND has done a lot of human-rights advocacy. I shouldn't be surprised, as he's Judge Adelman's appointee, and Adelman is a solid Progressive who gave a lecture on "The Erosion of Civil-Rights and What to Do About It," criticized excessively long sentences for young prisoners, etc.
So, hopefully that case is soon resolved. Hopefully the AAG will goose these people to make right the atrocious wrong that they did to me regarding my property AND the frame for having a razor. Hopefully....
Appreciate any calls of concern to the Judge or prison officials or ANY help anyone who's followed this story has provided. I continue to always need pens (item #4305). paper (#553), & stamped envelopes (# 8039) from www.JLMarcusWisconsin.com or Ph. 1-800-236-2611....at least until I settle this case! :D

PS. My star witness, J. Berg, who provided me with an affidavit for the above case(verifying that staff framed me for having a razor & let my former cellie destroy my TV) was brutalized by staff two or three days ago! He refused to return to his cell, refused to cooperate with staff handcuffing him, because he & others who worked in the kitchen were not allowed to go to rec or law library simply because they had jobs. He calmly sat in the day room in protest, until COs slammed him face-first onto the the floor, breaking his nose and shattering his cheekbone. A fellow litigator witnessed Berg being wheelchaired around, with blood all over his shirt & a spit-mask on (Berg is not a spitter; so, the mask is no doubt meant to pretend Berg's on par with Hannibal Lector, help justify - in staffs' minds - his harsh treatment. I fear his harsh treatment is partly due to him helping me.